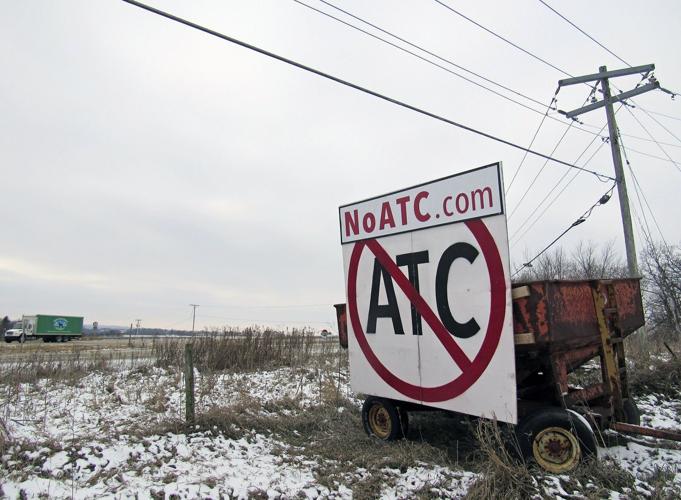 A grain wagon supports a sign along Highway 18-151 near Ridgeway in this photo from 2018. 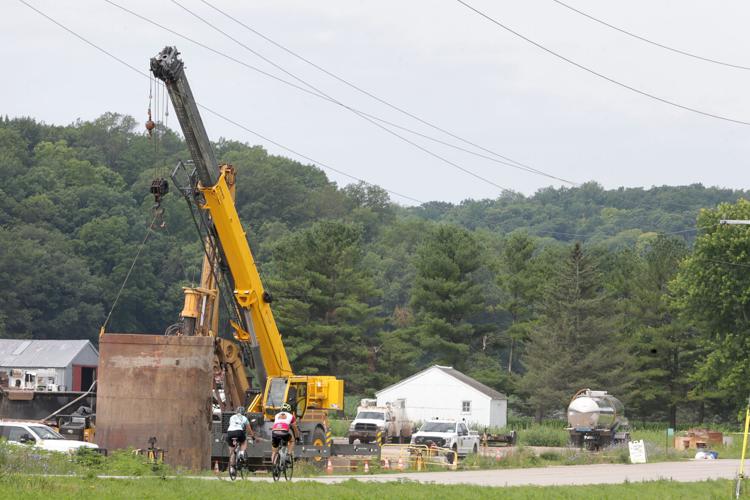 Cyclists pass a work crew installing a tower for the Cardinal-Hickory Creek transmission line Thursday on Stagecoach Road near Cross Plains. The state Supreme Court ruled that a former regulator's personal communications with utility executives did not create a serious risk of bias in his approval of the $500 million line.

Wisconsin’s state Supreme Court says a former utility regulator who exchanged messages with company executives and later sought a job with one of the companies he was tasked with regulating did not violate due process protections.

In a 4-3 ruling released Thursday, the court’s conservative majority sided with former Public Service Commission member Mike Huebsch in a case that stemmed from a disputed power line through southwestern Wisconsin.

The court did not address approval of the power line itself, but said a lower court was wrong in ordering the former Republican Assembly speaker and member of Gov. Scott Walker’s cabinet to testify and turn over his personal cellphone for inspection.

Reversing a decision by Dane County Circuit Judge Jacob Frost, the court found that a mere “appearance of bias” does not amount to a violation of due process.

The court said there was no evidence Huebsch’s private communications with utility executives tainted his vote in favor of the roughly $500 million project, nor did his subsequent application to lead one of those utilities.

Instead the court said regulators, judges and other officials should enjoy a presumption of impartiality and that it’s possible to set aside personal relationships when deciding cases before them.

Opponents of the line had sought to question Huebsch about communications — including some using an encrypted messaging app — with utility executives and his eventual attempt to land a job with one of the utilities.

The high court agreed to hear the case after Huebsch challenged the groups’ subpoenas.

Writing for the majority, Justice Patience Roggensack said power line opponents failed to show that Huebsch “presented a serious risk of actual bias in favor of approval of Cardinal-Hickory.”

“There is no factual evidence of any wrongdoing,” she wrote.

The three liberal justices filed a dissenting opinion accusing the majority of judicial overreach in a case they argued against hearing.

“Four members of this court transform a ‘procedural anomaly’ into a procedural tragedy,” wrote Justice Jill Karofsky. “Strikingly, this unbounded exercise of judicial power comes with no explanation, leaving all to speculate as to why this case and this subpoena recipient receive such special treatment.”

Huebsch called the ruling “a big win” for himself and for regulators across the country who had been watching the case.

“They said if you lose this, we’re out,” Huebsch said. “If that assumption of impartiality is gone, then there’s really no way to do this job.”

An attorney for the power line opponents said the ruling creates incentives for public officials to hide communications and undermine public trust in the regulatory process.

The PSC issued a statement saying integrity is core to its mission of ensuring safe, reliable, affordable and environmentally responsible utility service.

After the PSC voted unanimously in 2019 to approve construction of the 102-mile line between Dubuque, Iowa, and Middleton, conservation groups, along with Dane County and other local governments, claimed the commission’s vote was tainted by the appearance of bias.

They cited Huebsch’s service on an advisory board for the regional grid operator, MISO, which supported construction of the line, but later discovered that Huebsch traded dozens of messages with utility executives while the case was in front of the PSC and later applied to be CEO of Dairyland Power, a job he didn’t get.

Agreeing that the evidence created an “appearance of bias,” Frost ordered Huebsch to submit to questioning and turn over his personal cellphone and passwords.

Opponents gave up on the phone records after Huebsch appealed, but they later issued a second subpoena demanding Huebsch testify in court.

Huebsch then asked the Supreme Court to block the subpoena and overturn Frost’s “appearance of bias” standard.

While it was a setback for opponents, Thursday’s ruling clears a path for a federal judge to consider the same due process claims and for Frost to rule on the merits of the PSC’s construction permit itself.

“A fair review of the evidence will show that there are better, more cost-effective, more environmentally sound, and more flexible alternatives for reliable clean energy in the Wisconsin Driftless Area,” attorney Howard Learner said.

A federal judge previously ruled the line cannot cross the Upper Mississippi River National Wildlife and Fish Refuge, which stretches some 261 miles from Wabasha, Minnesota, to the Quad Cities.

Utilities have continued building on either side of the river — spending more than $277 million so far — while a federal appeals court considers the case, despite the judge’s admonition against creating “an orchestrated train wreck.”

In May, the utilities notified regulators that the project would exceed the approved $492 million price tag by more than 10% because of rising material prices and the ongoing legal battle.

Consumer advocates have called on regulators to halt construction until the court case is settled, arguing “the project is operating without a route, expected benefits, or a cost cap,” but the PSC has so far ignored such requests.

Utility spokesperson Alissa Braatz said they “look forward to successfully concluding the litigation” for the project, which they say is needed to support dozens of clean energy resources across the Midwest

“Utilities across our region are depending on the Cardinal-Hickory Creek project to facilitate the region’s transition away from fossil fuels and support decarbonization goals,” Braatz said.

Environmental groups challenged the PSC’s approval for the Nemadji Trail Energy Center, a 625-megawatt generator to be jointly owned by Dairyland and two Minnesota utilities.

Frost ruled in May that the PSC’s environmental review of the plant was sufficient under state law. But he delayed ruling on whether Huebsch’s application to lead Dairyland created an appearance of bias until the high court issued a decision in the Cardinal-Hickory Creek case.

Art of the Everyday: A recap of May in photos from Wisconsin State Journal photographers

"Trump owns (Tim Michels), he is connected to Trump," Gov. Tony Evers said. "That’s his problem, that’s not mine."

Barnes' win would set him up to face Republican U.S. Sen. Ron Johnson on Nov. 8.

Running on the myth that the 2020 election can be "decertified" proved to be a losing issue for many pro-Trump candidates.

Tim Michels has been endorsed by the former president, while Rebecca Kleefisch is the preferred candidate of the former vice president.

Watch now: Vos declares victory in District 63, says 'Gableman is an embarrassment to this state'

In the closest election he has ever faced in state politics, Assembly Speaker Robin Vos staved off a challenge from the right in the form of Adam Steen.

No Democratic opponent will appear on the ballot to face Vos, R-Rochester, in November, giving Vos a clear path to another term. Steen, an election denier, was boosted last week by a Trump endorsement.

Michael Gableman has been fired, marking an end to the more than $1.1 million taxpayer-funded, GOP-ordered review that has failed to uncover any evidence of widespread fraud in the 2020 election.

Vos said his opinion of Michael Gableman soured after the lead investigator recommended the Legislature decertify the 2020 results.

A grain wagon supports a sign along Highway 18-151 near Ridgeway in this photo from 2018.

Cyclists pass a work crew installing a tower for the Cardinal-Hickory Creek transmission line Thursday on Stagecoach Road near Cross Plains. The state Supreme Court ruled that a former regulator's personal communications with utility executives did not create a serious risk of bias in his approval of the $500 million line. 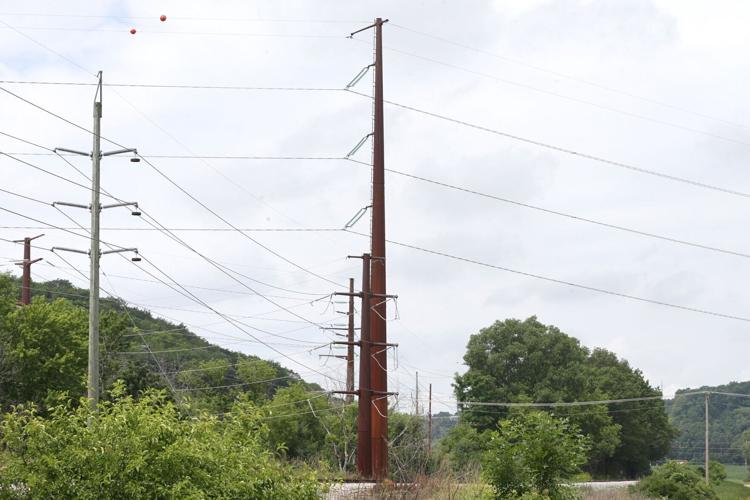 A substation for the planned Cardinal-Hickory Creek power line along Highway 14 near Cross Plains. 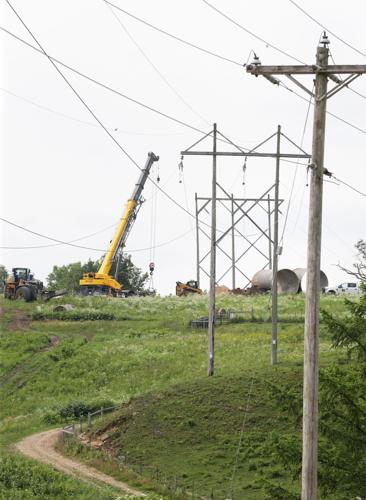 A work crew begins to install a tower Thursday as part of the Cardinal-Hickory Creek power line along County Highway P in Cross Plains. 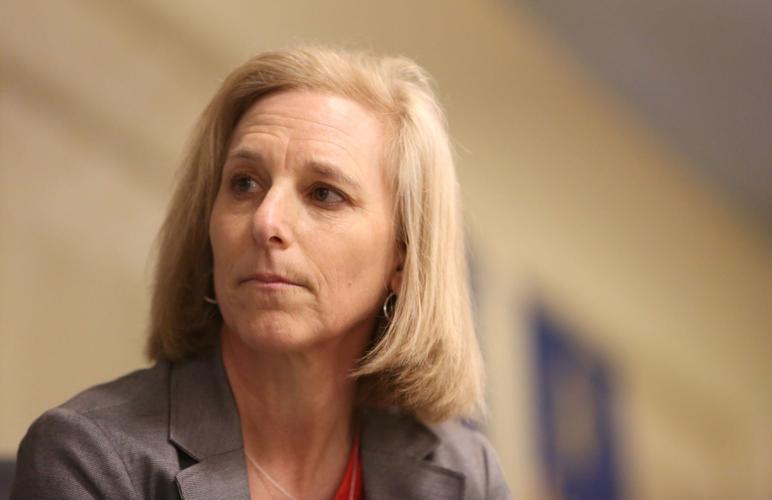 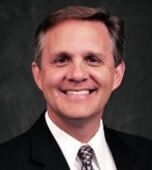 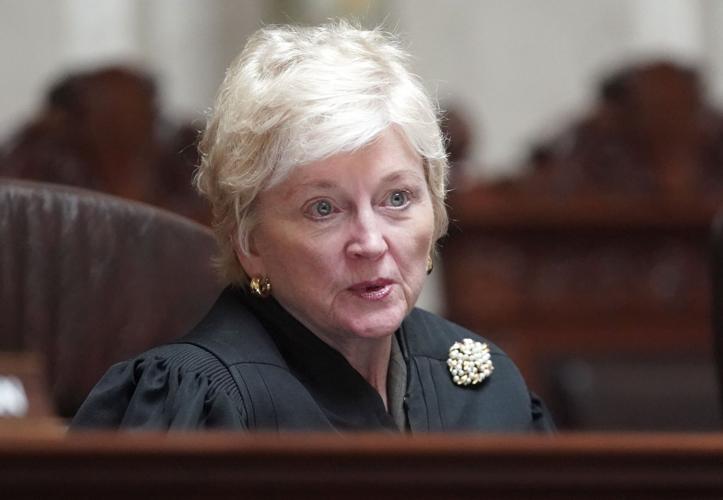 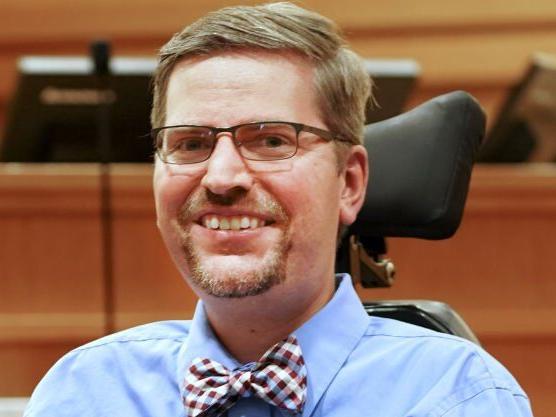