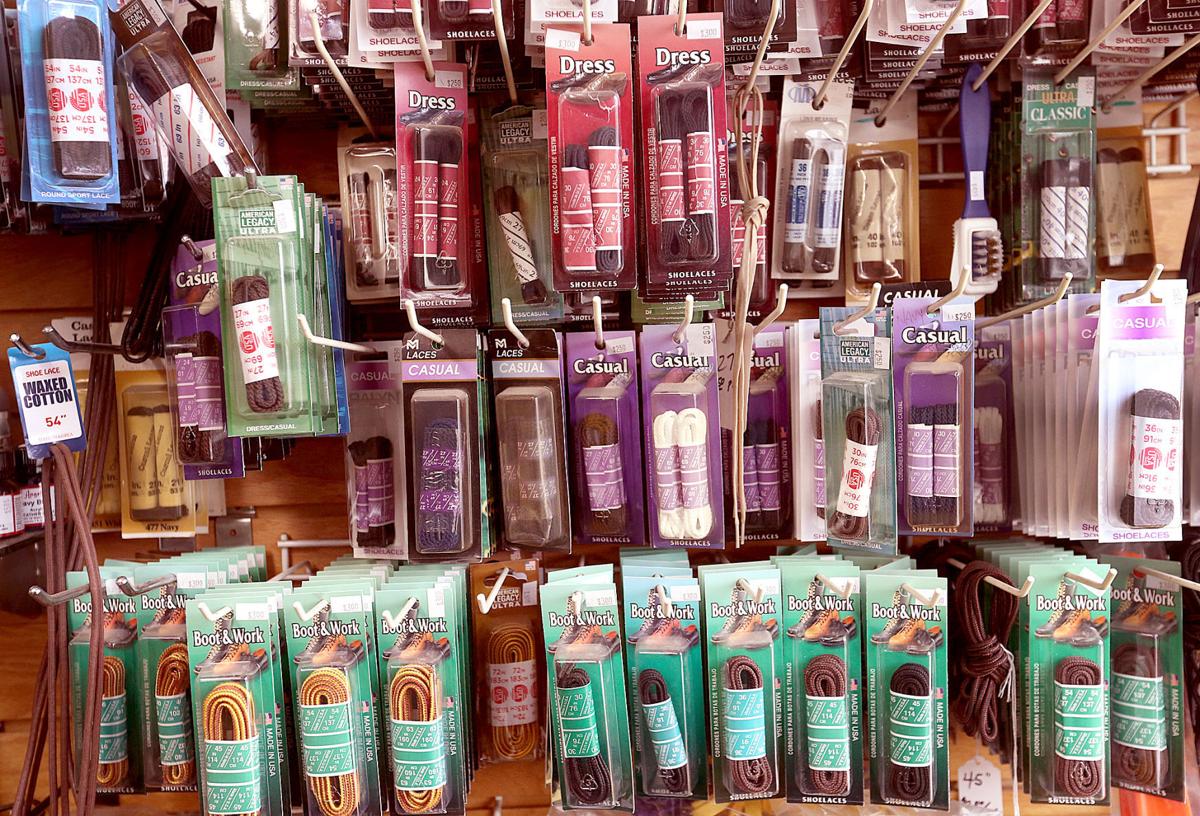 Shoe laces are a best seller at Dan’s Shoe Repair where a wide variety of shoe care products are also available. 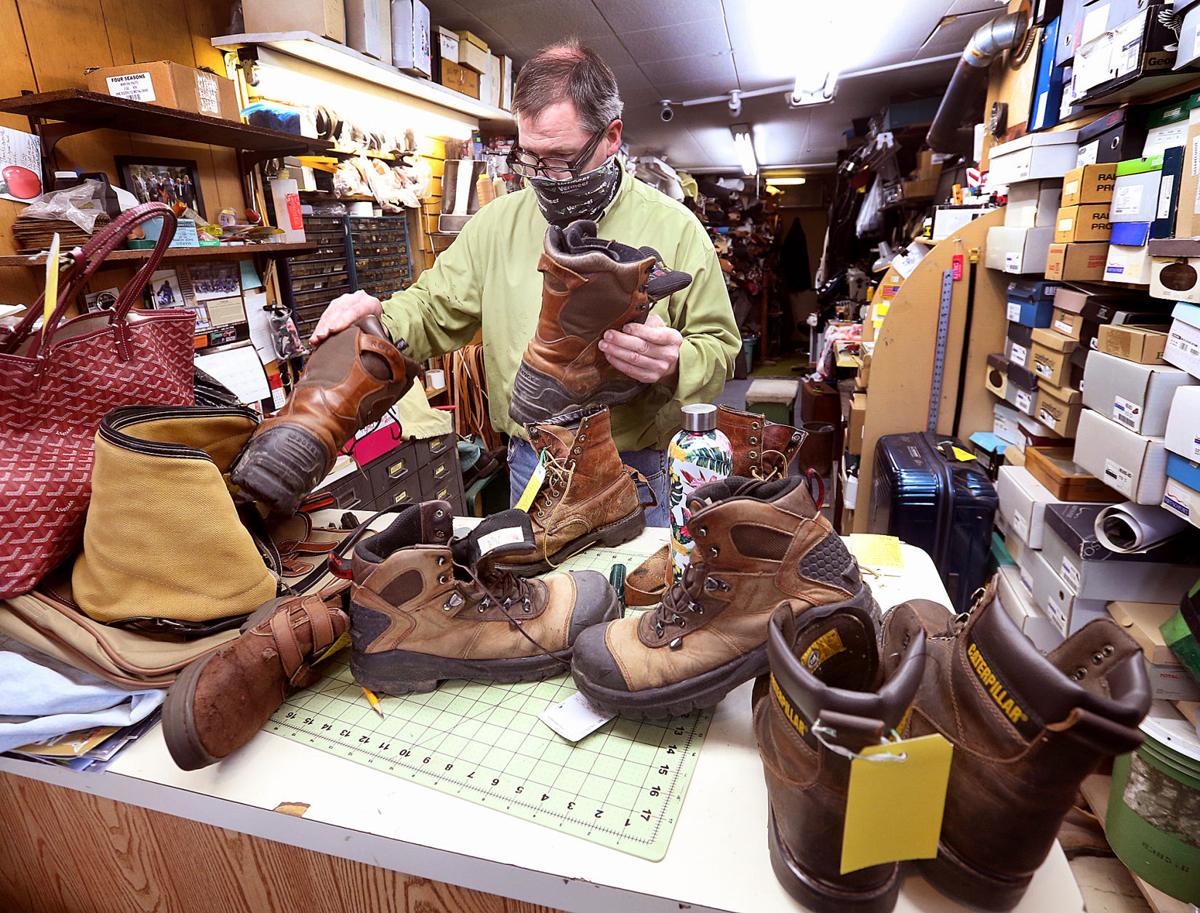 Dan Grogan, owner of Dan’s Shoe Repair at 112 Fifth Ave. N., sorts through repair jobs at his shop that he has owned since 2009.

By STEVE CAHALAN For the La Crosse Tribune

The coronavirus pandemic’s impact on the number of shoppers downtown caused his sales to be down about 40 percent last year compared with a normal year, he said Thursday.

But business has been picking up since fall, Grogan said, and his December sales were down 15 to 20 percent from a normal December.

“It was spooky downtown, the streets were bare,” Grogan said of the spring and summer months. “Things started to pick up in October and November. There were more people downtown by then.”

Grogan said he is grateful for customers who continued to patronize his shop in 2020. “I’ve never had so many tips as I had during the slowest months this past summer, when people would just put a $5 or a $10 tip on the counter and say ‘We appreciate you,’ “ he said.

Grogan is more optimistic about this year, now that coronavirus vaccines are starting to become available.

“I think business will be off a little” this year, he said. “I think it will be a little bit quiet. But it will be a relief for folks to know that it’s safe” to be going out, once the vaccines have been widely administered.

“People are still going to have to wear shoes,” Grogan said. “But my best-selling item right now is house slippers. They’ve been my best sellers because people are in their house a little more (than in a typical year) and they’re looking for something to keep their feet warm.”

Dan’s Shoe Repair repairs shoes as well as such things as coats, purses, zippers and horse tack items such as saddles, straps, harnesses and reins. It also sells shoes, boots and accessories, along with essential oil and CBD products.

CBD products are new at the shop in the last year or two, Grogan said. He decided to begin carrying them because they had become popular.

Grogan also custom makes shoes and some other leather goods such as knife sheaths and belts.

This year, Grogan expects to increase the number of shoes that he makes. “I think we can compete because of people wanting better stuff,” he said of manufacturing shoes. “They’re just tired of buying subquality shoes from overseas.”

Grogan has one part-time employee. And every so often, former shop owner Dave Ingram drops in to help.

The business was known as Dave’s Shoe Repair until Grogan bought it from Ingram in November 2009. Ingram had owned it since 1991.

The business was first opened by Louis George as George’s Shoe Repair in 1935 on Fourth Street, according to La Crosse Tribune files. It has been at its current location since the late 1950s.

Ingram, who was 66 when he retired and sold the shop to Grogan, started in the footwear business as a 16-year-old shoe shine boy for shop owners Louis and Ernie George.

A couple years before he retired, Ingram approached Grogan about working for him and eventually buying the business.

Grogan, who now is 58, had worked at Lenny’s Shoe Repair from 1988 to 2005 before going to work for a local concrete pipe manufacturer. Grogan started working at Dave’s Shoe Repair about 1½ years before he bought the shop.

Grogan said he decided to buy the shop because “with new adhesives, we can take in more shoes (for repairs) that previously were considered non-fixable.”

Another reason for buying the shop was that the economy was down at the time. Business at shoe repair shops increases when the economy is down, as customers are less likely to buy a new pair of shoes then, Grogan said.

Grogan said he enjoys the creativity and independence of the shoe repair business, which draws customers from as far away as 100 miles. “You’re helping people and have to have some craft ability,” he said.

WHAT: A shop that repairs shoes as well as such things as coats, purses and zippers. It also sells such merchandise as shoes, boots, essential oils and CBD products.

WHO: The business has been owned by Dan Grogan since November 2009. It began as George’s Shoe Repair in 1935 at another downtown location.

After 27 years, Chris Kahlow has closed her Jules’ Coffee House at 327 Pearl St. in downtown La Crosse and put the business and its equipment …

Citing the effects of the coronavirus pandemic, Minneapolis-based women’s apparel chain Christopher & Banks, which has a store in Valley V…

ONALASKA — A Winona hotel company saw an opportunity, when it learned the IHG – the parent company of the Holiday Inn Express chain – wanted t…

Citing the effects of the coronavirus pandemic, Minneapolis-based women’s apparel chain Christopher & Banks, which has a store in Valley V…

States with the largest tax burden

States with the largest tax burden

How PPP Rules for Small Businesses Have Changed This Time Around

How PPP Rules for Small Businesses Have Changed This Time Around

Shoe laces are a best seller at Dan’s Shoe Repair where a wide variety of shoe care products are also available.

Dan Grogan, owner of Dan’s Shoe Repair at 112 Fifth Ave. N., sorts through repair jobs at his shop that he has owned since 2009.