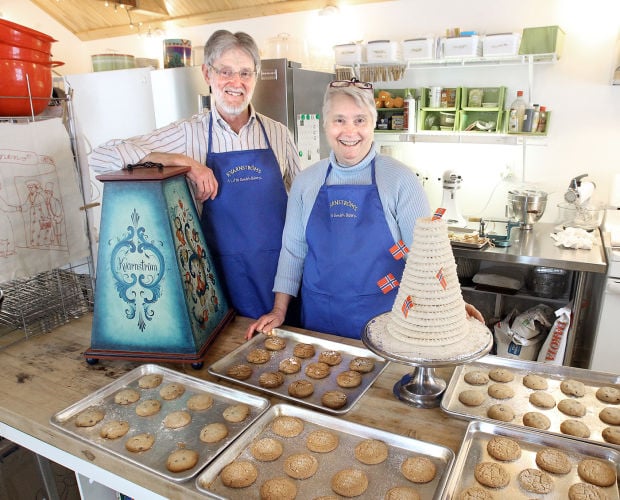 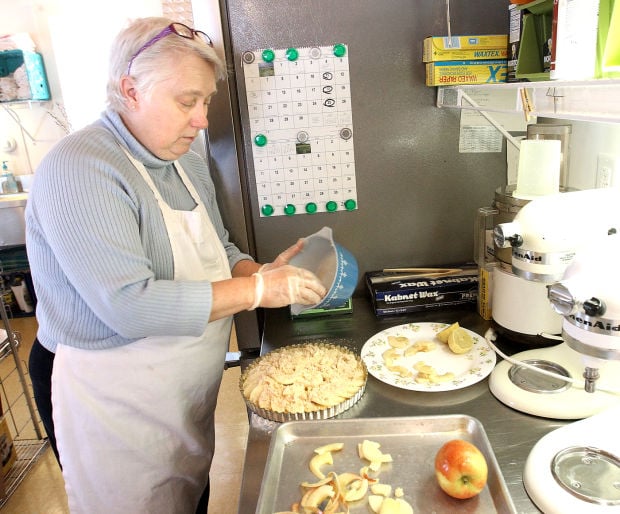 Joyce Quarnstrom puts the finishing touches on an apple cake in her kitchen at Kvarnstrom's Bakery. Quarnstrom is a regular on the “Who’s in the Kitchen” talk show on WDRT-FM.

WESTBY — Four years ago, Joyce Quarnstrom of Westby decided to retire from her 30-year nursing career and become a full-time baker.

Three years after they started Kvarnstrom’s Bakery in their backyard, she and her husband, Gordon Vande Voorde, continue to turn out Scandinavian and other specialty baked treats.

They bill the business as “A little Swedish bakery … and more.”

The business operates from a 13- by 20-foot red building behind the couple’s house at 210 Coon Prairie Ave. on the south side of Westby.

“This probably was built as a carriage house,” Vande Voorde said. He and his wife used it for storage before they gutted and renovated the building, turning it into a licensed commercial kitchen for their bakery.

Vande Voorde has a full-time job as a teller at WCCU Credit Union but helps his wife at the business where she works full time. “Joyce does about 95 percent” of the work at the bakery, he said.

The kransekaka cakes that Quarnstrom bakes typically have 18 or 36 rings. “It tastes like an almond cookie,” she said of the layers. She decorates the cakes with flags of countries such as Norway, Sweden and Denmark.

“About half of what we make is Scandinavian,” Quarnstrom said. Many of the bakery’s customers bring in recipes from their ancestors or older relatives and ask her to bake those particular items for them.

“We call ourselves a bake-to-order bakery,” Quarnstrom said. “We’re not your traditional bakery.” There are no display cases with baked goods for people to walk in and buy.

Anyone can place order with the bakery.

“This is a recipe from my grandmother,” Quarnstrom said as she carefully put a layer of sliced apples on batter for an apple cake. “We specialize in recipes that bring back memories and take people back” in time.

“My grandmother lived to be 102,” Quarnstrom said. “You could walk into her kitchen, and there was always something baking. There are certain cookies that I make with her recipes that take me back.”

Her daughter, Emma Quarnstrom, created a cookbook full of color photos and family recipes and gave it to her for Christmas.

“We’re hoping to get it published in a few months,” Quarnstrom said. It probably will be for sale through the bakery and at its table at the Viroqua farmers market.

Quarnstrom and her husband are South Dakota natives and moved to Westby a dozen years ago.

She worked part time baking at the Driftless Café in Viroqua for two years before baking pies and cookies at Borgen’s Café in Westby for three years.

Quarnstrom retired from nursing four years ago after deciding to open her own bakery. “You couldn’t make it work unless you did it full time,” she said of running a bakery.

Quarnstrom, who is of Swedish and German descent, said Kvarnstrom is the original spelling of her family’s last name. Her grandfather changed the spelling when he came to America around 1910.

What: A small bake-to-order bakery owned by Joyce Quarnstrom and her husband, Gordon Vande Voorde. Scandinavian treats account for about half of the bakery’s production.

Where: In a licensed commercial kitchen, in a former shed in the backyard of the owners at 210 Coon Prairie Ave. in Westby.

How to buy: The owners sell some baked goods at the Viroqua farmers market on Saturdays during the summer. They supply some items to the Brew Dog coffee bar and Tangled Hickory Wine Bar in Viroqua, and to the Ole & Lena Kaffe Hus in Westby. They also will supply some items to the Legacy Grill & Pub that will open soon in the former DiSciascio’s restaurant in Coon Valley. But the bakery accepts orders from anyone.

A proposed $40 million development would bring a new hotel, RV park, vacation rentals and single-family homes to the town of Baraboo near Devil’s Lake over the next four years.

'We’re going to miss it'

SPARTA, Wis. — Forty-seven years after he started the business in his father’s hardware store, Mike Haas and his wife, Julie, have started a g…

Madison has bolstered its potential to become an artificial intelligence tech powerhouse within the last decade because of research activity, according to a new report from Washington D.C.-based think tank Brookings Institution.

Mark Schneider, who with his wife, Laurie, started the Glory Days sports pub in downtown La Crosse in 1996, is happy that new owners will cont…

How to beat your summer ‘revenge shopping’ debt

If your summer of “revenge” spending has come for a payback of its own in the form of lingering debt, make a plan for paying it off. Also, check out more of the week's best money tips from experts.

Joyce Quarnstrom puts the finishing touches on an apple cake in her kitchen at Kvarnstrom's Bakery. Quarnstrom is a regular on the “Who’s in the Kitchen” talk show on WDRT-FM.