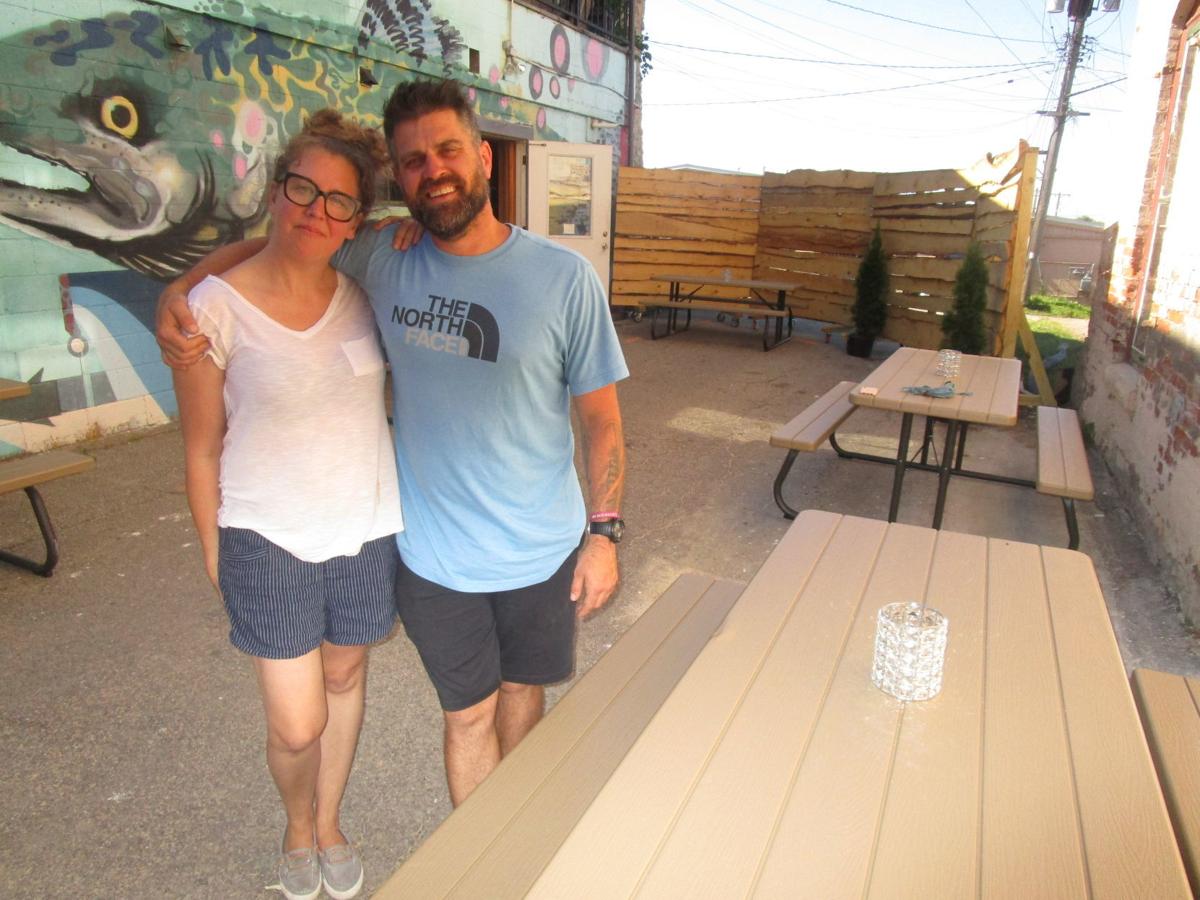 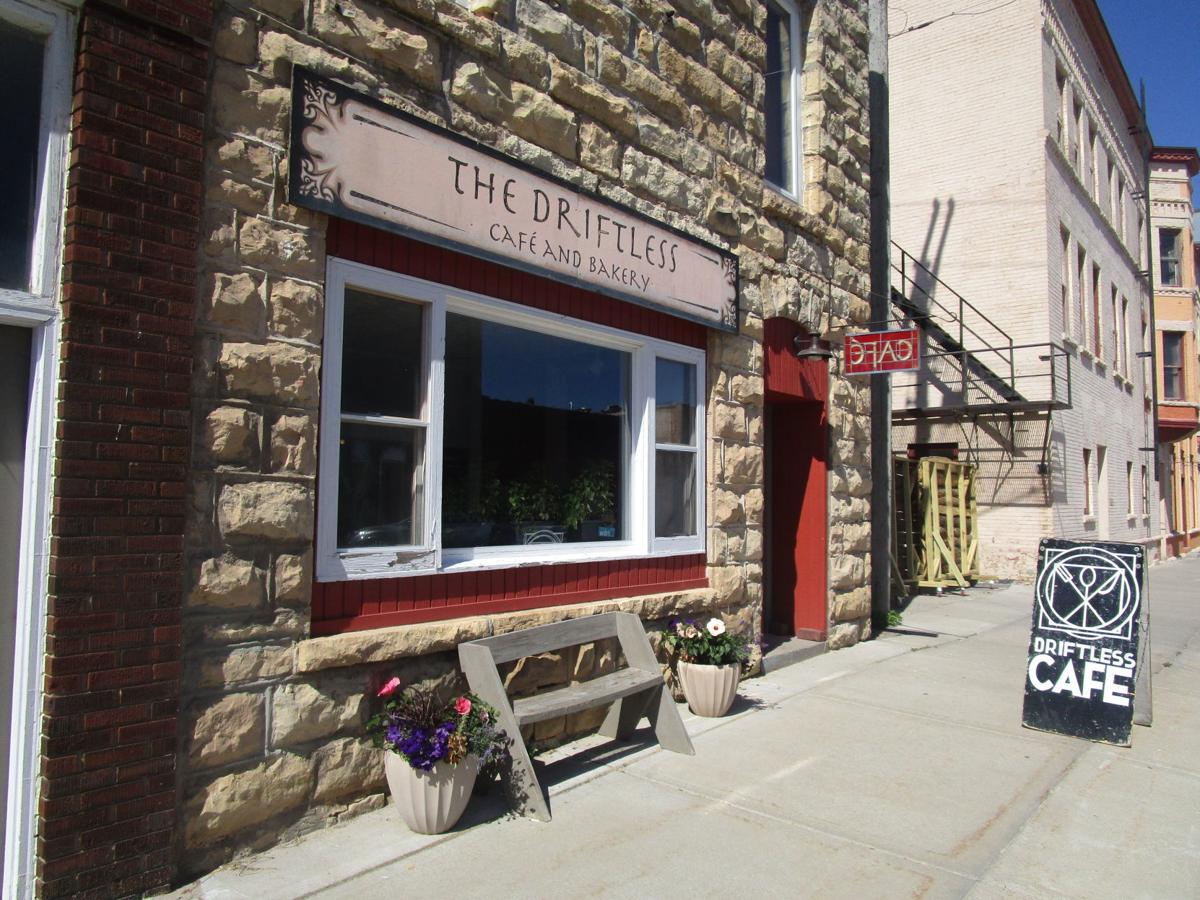 The Driftless Cafe in downtown Viroqua, which Luke and Ruthie Zahm purchased in 2013 and expanded in 2014.

VIROQUA — Luke and Ruthie Zahm were extra careful about reconfiguring the interior of their Driftless Cafe in downtown Viroqua, and adding a new outdoor seating area, before they reopened it to on-premise dining on June 11.

The well-known farm-to-table cafe had reopened for take-out food May 21, after being closed since March 17 with Gov. Tony Evers’ stay-at-home order limiting Wisconsin bars and restaurants to take-out and delivery only, in order to reduce the spread of coronavirus.

A number of bars and restaurants were quick to reopen to on-premise dining after the governor’s order was struck down by the Wisconsin Supreme Court on May 13, but the Zahms took their time, planning and then implementing additional safety measures.

Today, the Driftless Cafe is in full operation with fewer inside seats and with the new outdoor dining area.

Also, Luke is busy working on new episodes for his second season as host of the “Wisconsin Foodie” series on Wisconsin Public Television.

The 13 episodes in his first season aired from January through April, and the 13 shows in his second season will begin airing next January. Both Luke and Ruthie also are involved as producers, assisting Arthur Ircink, the show’s founder and executive producer.

The Zahms say the Driftless Cafe is there to serve its customers and keep them safe, while helping to protect the community and celebrating the farmers and other food producers in the region.

Before opening to on-premise dining June 11, the cafe extensively cleaned and added plexiglass and dividers inside, while reducing the number of chairs and tables to allow for social distancing. And an outdoor dining area was created in the alley next to the cafe, with two moveable walls made with red pine boards, and with five picnic tables that each seat up to six people.

“We went from 88 seats to 52 seats inside,” Luke said, while the picnic tables outside have a potential capacity for 30 people. Weather permitting, the outdoor dining area is open for dinner every day the cafe is open, and also is open for lunch on Saturdays. The alley has to remain open to traffic at other times, because of renovation work that’s under way on the nearby Fortney Hotel.

“I think dividers and the reduction in the number of people in the dining room really helps” customers and employees feel safe, Ruthie said. “It seems that people have felt safe in the restaurant, which has been really good,” she said Wednesday.

“We truly want everyone who comes into the restaurant to feel safe no matter what they are taking part in,” Ruthie said. “If you still want to have carry-out and not come into the restaurant to eat, we’re still offering a full carryout menu. And if you feel like eating here, you can choose to ask to eat outside if you’d like. We wanted to make sure that everyone who came in as things were opening up again had a safe place” to eat.

The Zahms, who were interviewed by the Tribune while wearing face masks, said they also require their staff to wear face masks. Since on-premise dining resumed, Ruthie estimated, 40% to 50% of customers have been wearing face masks when they enter the cafe.

“We’d like to keep (outside dining) going for as long as we can,” Luke said. “But we also understand that we live in a climate that will allow us to do this comfortably until maybe September or October. At that point, we’ll look at whatever our other options are. But I do think that post-COVID, having outdoor dining in some capacity is going to be in the formula for the cafe.”

The Zahms said they appreciate the support that they received from their family, the community and their customers before and after the cafe reopened. While it was closed, Luke said, “people kept buying gift certificates and sending nice messages and really inspired us.”

The Zahms bought the Driftless Cafe in 2013 and expanded it in 2014. The cafe is known for its creative cuisine and for using locally produced ingredients, and draws customers from as far away as Chicago, the Twin Cities and Milwaukee.

About 85% of the money it spends on food is for items produced within 100 miles of Viroqua, Luke estimated.

The cafe’s website provides information on its daily menus and where the food comes from.

Ruthie was raised in Viroqua, while Luke grew up near La Farge. Ruthie also is a nurse, working part time for the University of Wisconsin-La Crosse student health center.

A year ago, Luke was named host for the 12th season of the “Wisconsin Foodie” television series, which features restaurants and other food-related businesses around the state.

“All of our episodes (for his second season as host) basically have to be turned in to PBS by Thanksgiving,” he said.

“We’ve piecemealed a couple shoots, mostly prior to COVID,” Luke said of the upcoming season, adding that work on new episodes soon will begin in earnest.

The show’s executive producer has the final say as to which businesses are featured.

“When it comes down to restaurants specifically, we want to make sure that we’re not only capturing amazing restaurants, which there is no shortage of in Wisconsin,” Luke said. “But we are also really trying to develop compelling stories behind them.”

WHAT: A farm-to-table restaurant owned by Luke and Ruthie Zahm.

Holli Burch and her sister, Erika Helgerson, plan to open their new Coulee Scrubs store sometime this week in the former Beef Jerky Outlet location in Suite C at 1226 Crossing Meadows Drive, in the Crossing Meadows Shopping Center in Onalaska.

Fifteen years after Viroqua-based Kickapoo Coffee Roasters began, its three owners have renamed the business Wonderstate Coffee and plan for continued growth in sales and in the number of Wonderstate cafes.

Most of Epic's nearly 10,000 employees will be required to return to the health software company's campus by Sept. 21.

SPARTA, Wis. — Eight years after he came up with the idea, Beau Burlingame and his wife, Jeanette, have opened their Beer Shop beer bar/beer s…

Steve Cahalan: Shenanigans’ future is up in the air

The owners of the Shenanigans family entertainment center and sports bar at 2100 Dawson Ave. on French Island have turned that space into Sere…

Don’t Charge These Purchases to Your Credit Card

Don’t Charge These Purchases to Your Credit Card

The Driftless Cafe in downtown Viroqua, which Luke and Ruthie Zahm purchased in 2013 and expanded in 2014.