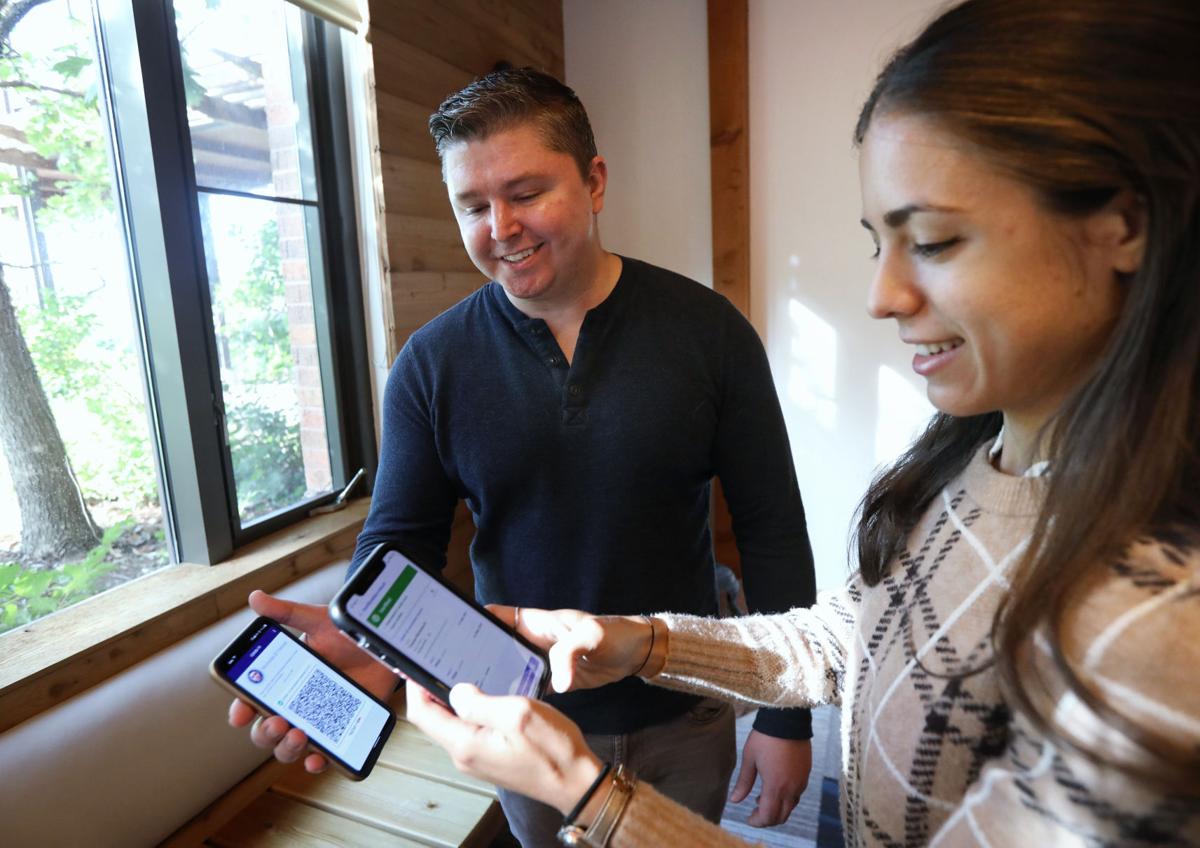 Nick Frenzer, left, implementation executive at Epic, and Danyele Homer, implementation director, demonstrate how to use software that was developed to show proof of the COVID-19 vaccine using a QR code. 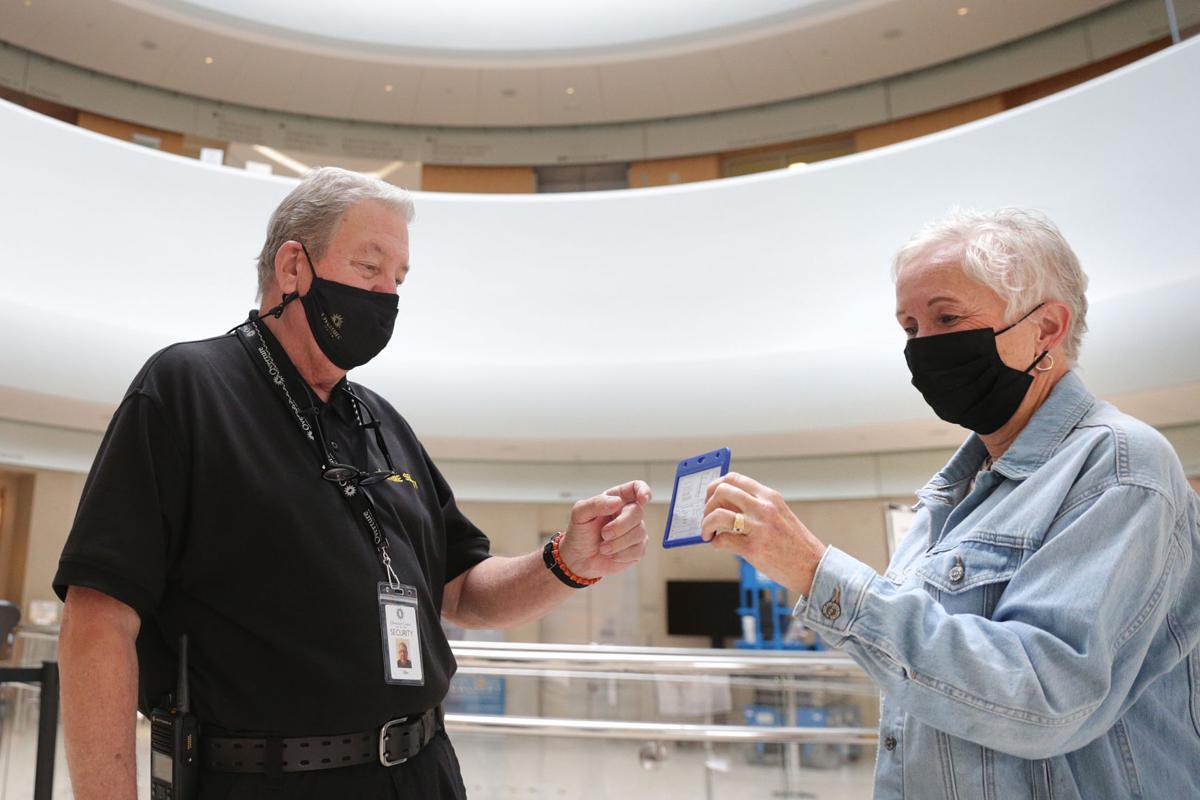 Verifying a person’s COVID-19 vaccination status or test results at local businesses may have just become more convenient thanks to a new technology developed by Verona-based Epic Systems Corp.

The technology could change how government entities, event venues, health care providers and even airports ensure people have received jabs without violating a patient’s privacy, and support industries that have experienced the worst of the pandemic’s financial fallout. It could also be used for other health conditions.

“If we could take this (software) — tied to one discrete piece of information — this is a repeatable technology,” said Epic implementation executive Nick Frenzer.

The technology is currently live for 25 million patients, Frenzer said Thursday, but 70 million to 80 million people will have access by the end of the year. More than 100 million will be able to use the tech in 2022, he said.

Epic also plans to take the tech beyond Madison borders, as Frenzer said the software giant has connected with the Federal Aviation Administration, a few states including California and New York, and even the White House. The company is additionally in talks with the Food and Drug Administration, as well as the federal Centers for Disease Control and Prevention.

But getting to this point took a while for the health care software giant.

Even before 2020, Epic had pulled together “a number of industry leaders,” Frenzer said, including Microsoft and Salesforce to see how people could check their vaccination status or lab results digitally, Frenzer said of the tech’s research and development phase. After establishing some goals for the tech, the team designed the software in an open source format so anyone could develop and support it.

“The process took close to nine months,” he estimated.

How the credential works

How the tech works, Frenzer said, is similar to a paper vaccine card.

It binds a person’s identity, including name and date of birth, with vaccination or lab results, he said. But unlike a CDC-issued card, the vaccine credentials can be represented by the QR codes, which are digitally signed to prevent tampering. They can also be displayed through MyChart on a mobile device, printed, or saved to another mobile application.

If MyChart does not yet have a patient’s vaccine information, the patient can use the software to query a connected state immunization registry to obtain it and generate a code, Frenzer said.

The credential meets what’s called the VCI Initiative’s SMART Health Cards Framework, which allows a business or venue to use a machine reader to verify vaccination status or lab results.

The VCI is a voluntary coalition of public and private organizations committed to giving people access to a “trustworthy and verifiable copy of their vaccination records in digital or paper form using open, interoperable standards,” its website states.

The show must go on

Overture staff, she said, are still learning how the credentialing tech works, but she’s excited about the convenience it will provide venue patrons and employees.

“The patron doesn’t have to fumble around trying to make sure they have all the right documentation,” Gruenewald said, which is currently a vaccination card and photo identification. “The credential would have been great if we had it ready to go for two (recent) nearly sold-out shows.”

She’s also quite relieved that the Overture has been able to host events again after a long 18 months of being closed. During that time, Gruenewald estimates, the venue lost dozens of employees.

But earlier this summer, both the Overture and Sylvee started requiring patrons to either present proof of vaccination upon attending an event, or to have a negative test within 72 hours. Other venues requiring proof include High Noon Saloon, the Orpheum Theater and the Majestic Theatre, all Downtown.

Group Health is able to access QR codes for patients but does not yet use the application that scans them.

Regardless, the health care organization checks for status. And if they find out a patient has not yet received a shot, it’s a routine part of Group Health’s workflow to offer and encourage it, Huth said.

“(Vaccinations) are the best option for keeping people safe,” Huth said of why people should consider getting a COVID-19 shot. “Even though vaccines aren’t 100 percent effective … even if (immunity) does wane a little bit … what we tend to see is even people who have breakthrough infections … the severity of their symptoms tends to be much less than in unvaccinated individuals.”

Madison is a place where people believe in science and data, said Greater Madison Chamber of Commerce president Zach Brandon. The region also has an “opportunity to learn whatever the next normal looks like,” he said. It’s a future that could include more technologies like Epic’s.

He said the Chamber has access to the scanning technology and plans to use it for events. But as with all new tech, products or even medicines, there will be people, businesses and organizations who choose to embrace it right away, Brandon said, calling them the “early adopters.”

Then will be others who are more skeptical or who choose not to adopt at all. But Brandon agrees with Huth that vaccines are the best way to put an end to the health crisis, or at least mitigate it. Like Epic’s new tech, “it brings value and provides a solution.”

“There is no other path forward,” Brandon said.

Editor's note: This story was updated to clarify how UnityPoint Health, SSM Health and Group Health Cooperative of South Central Wisconsin use the technology.

To survive, business owners know they need to be prepared for what’s next. It’s safe to say most weren’t prepared for the cataclysm of the last year. Yet, most adapted. From reducing hours and adding curbside pickup or outdoor seating to changing product lines, finding new suppliers and moving their operations online, companies reinvented themselves. Some of those changes were temporary; others will alter the face of Madison’s business community for years to come.

Post-pandemic retail: What's in, what's out

The COVID-19 pandemic touched nearly every aspect of our lives, changing how and where we work, study, play and shop. With restrictions on soc…

As employees return, flexibility is key to post-pandemic workspace

In March 2020, as stay-home orders forced businesses and offices to close, leaders at American Family Insurance were trying to figure out how …

PAID CONTENTAs the Princeton Club successfully prepared for the safe return of its members during the pandemic, it also planned for a brighter…

On their websites, members of the Food Fight restaurant group list their safety protocols alongside their menus. In email blasts to customers …

Internet use skyrockets during pandemic, driving demand for more access

As work, school and most social interactions shifted to online platforms, internet usage skyrocketed by as much as 50%, according to a report from OpenVault.

Nonprofits face long road to recovery, but organizers optimistic community will step up

Habitat for Humanity expects to build more homes but is facing higher construction costs due to a rise in the cost for building materials.

PAID CONTENTGrieving the loss of a loved one is difficult enough, but the COVID-19 pandemic provided Cress Funeral and Cremation Service with …

In its effort to make streets more pedestrian-friendly, Madison and other cities around the country have long relied on “mixed-use” developmen…

Online brands help the bottom line for some Madison-area restaurants

Some Madison-area restaurant owners who developed online restaurant concepts during the pandemic say the experiments paid off.

Madison-area hospitals to continue some pandemic protocols, push ahead on big projects

Amid a fast-spreading virus that at times threatened to overwhelm them, health care providers had to quickly retool many of their practices an…

PAID CONTENTThe Wisconsin Idea is the notion that the benefits of the University of Wisconsin should ripple well beyond the borders of campus.…

When COVID-19 outbreaks forced mass shutdowns of large slaughterhouses last year, it led to an overwhelming surge in demand for small meat pro…

Overture to bring back Broadway in the fall

When a group from Madison Opera walked inside the Overture Center a few weeks ago to film a video, several of the Madison Opera staff members …

Dance company moves — and brings technology along with it

The COVID-19 pandemic is not the reason the contemporary dance company Kanopy Dance had to find a new home for its dance studio.

Positioning for a post-pandemic world

PAID CONTENTAs the global economy bounces back, investors will face both uncertainties and opportunities. In order to maintain a strong portfo…

What things do you want to see stick around after the pandemic's over?

The costs of the COVID-19 pandemic have been immeasurable. But as the state and the nation emerge from the trials of the last year, the Wiscon…

The pandemic had devastating consequences for many Madison-area businesses. Some didn’t make it. Others found a way to limp through. The commo…

Nick Frenzer, left, implementation executive at Epic, and Danyele Homer, implementation director, demonstrate how to use software that was developed to show proof of the COVID-19 vaccine using a QR code. 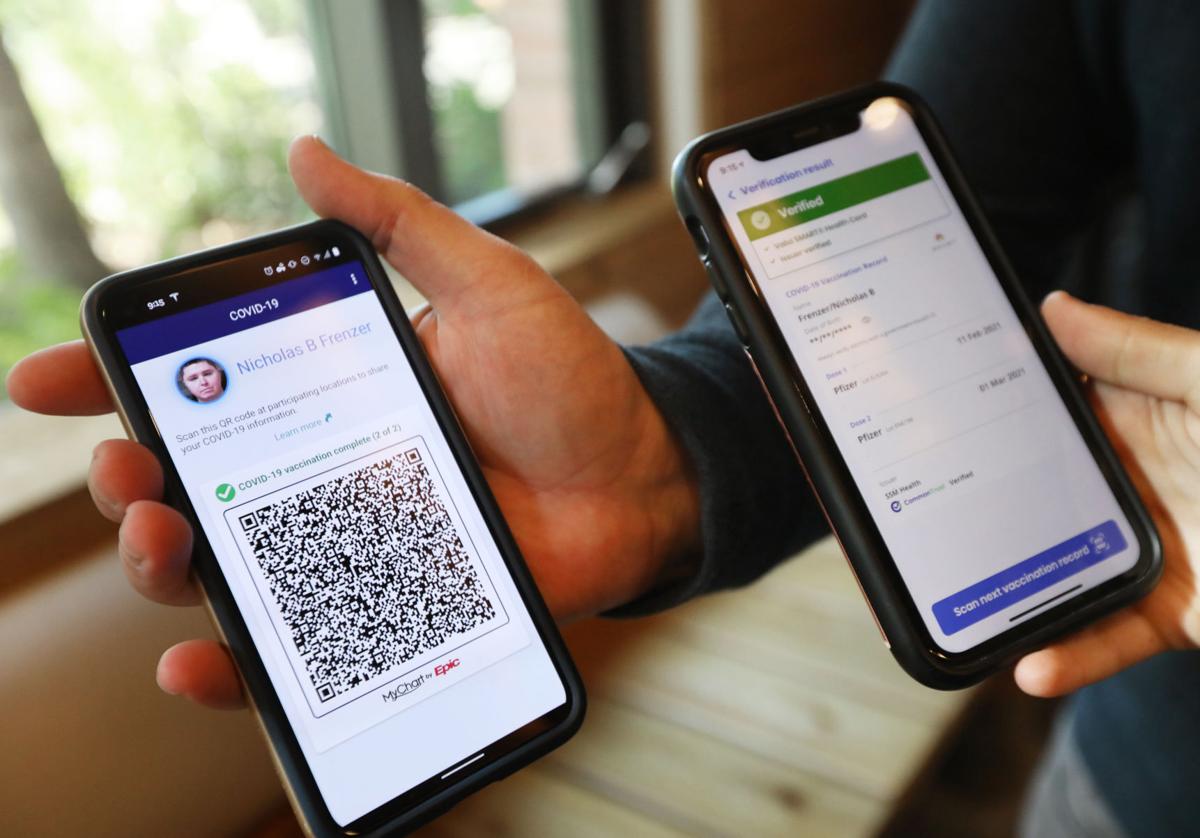 A QR code on one phone provides proof of COVID-19 vaccination to another phone, a new technology that could allow airports, event venues and other places to ensure patrons are vaccinated. 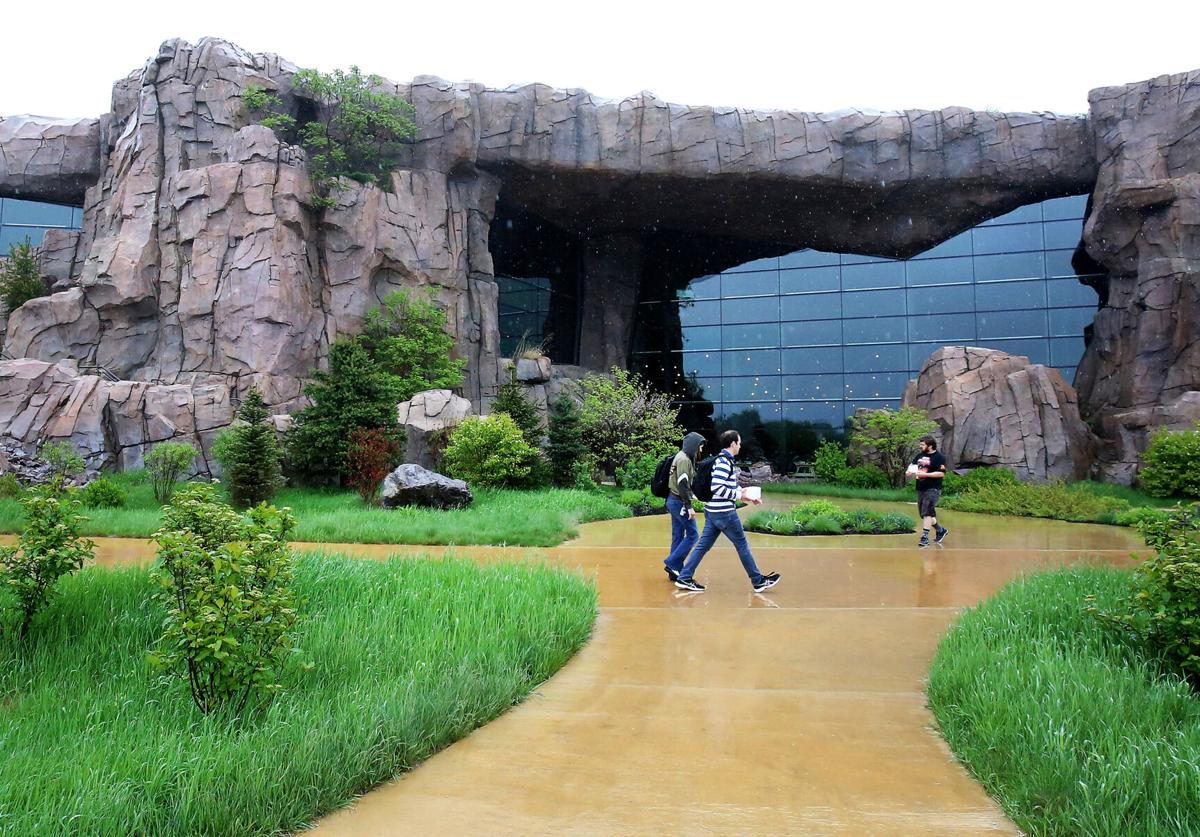 Medical software giant Epic Systems Corp. is based in Verona and is the largest private employer in Dane County.