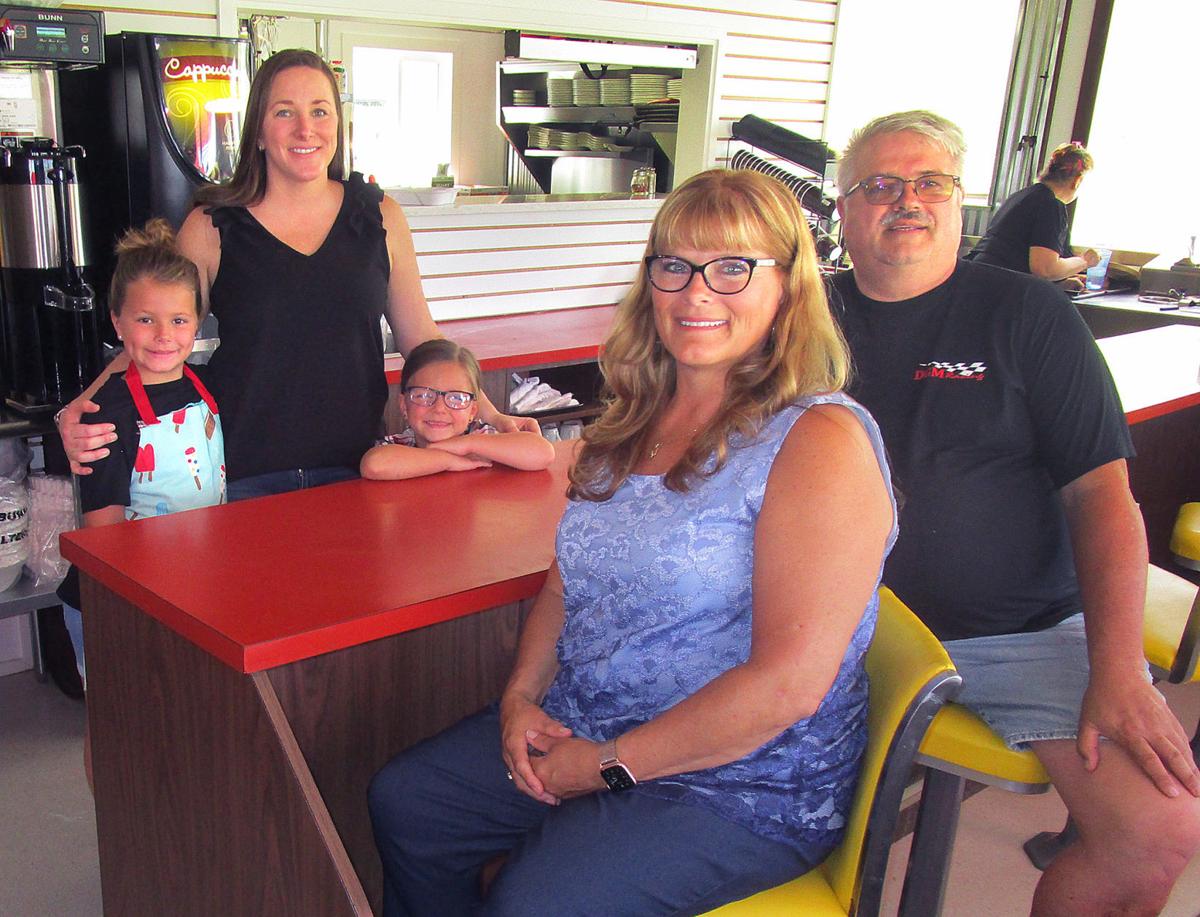 Cheryl and Dave Bean sit at a counter at their new Beanie’s Diner restaurant in Westby. Their daughter-in-law and diner general manager, Misty Bean, and Misty’s daughters, (from left) Marley and Moxley, are behind the counter. 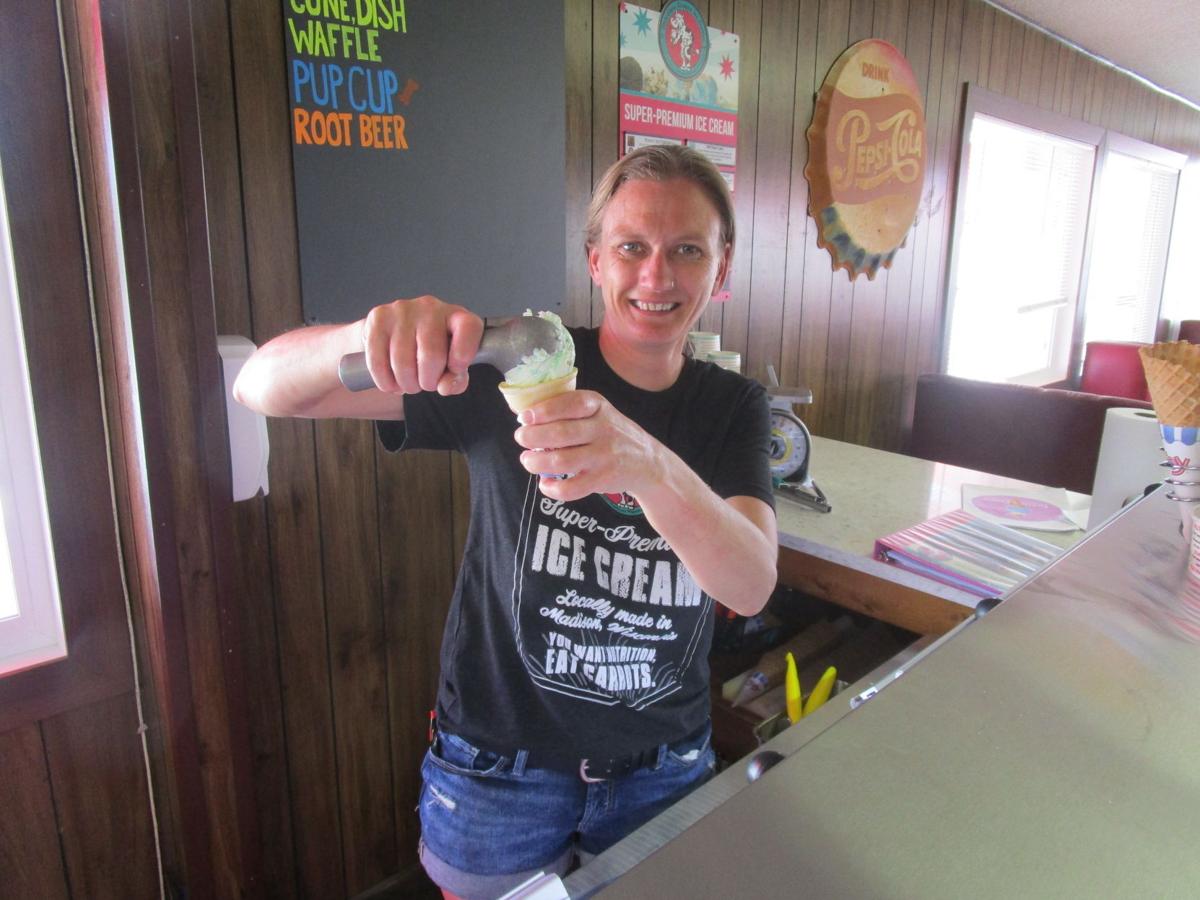 WESTBY — Dave Bean’s wish to open a retro diner known for ice cream and a large variety of hot dogs has come true.

He and his wife, Cheryl, own Beanie’s Diner, which opened June 8 at 203 W. Old Town Road, along Highway 14/61 on the south edge of Westby. It’s across the highway from the Old Towne Inn supper club, and south of Nordic Creamery’s new retail store.

The couple’s daughter-in-law, Misty Bean, is the diner’s general manager.

“It’s something I’ve been wanting to do,” Dave Bean, who owns several other businesses, said of opening the diner. “I’ve been testing hot dogs for 25 years.”

The new diner is in the northernmost of the two white former temporary classroom buildings that Dave and Cheryl Bean purchased a few years ago from the Black River Falls School District.

The diner serves 16 flavors of Chocolate Shoppe Ice Cream from Madison, which have been a big seller.

“If we stay real busy with ice cream, we’ll move the ice cream into (the south building) and possibly have an arcade for kids” there as well, Dave Bean said. The north building would continue to house the diner.

The new diner’s tables, chairs and some of its equipment and decor came from a 1960s-era diner in Michigan.

Beanie’s Diner offers several varieties of hot dogs. The most popular ones so far include the Chicago Dog, which is served on a poppyseed bun with mustard, sweet relish, onions, pickle spear, tomatoes, sport peppers and celery salt; and the Super Dave, a hot dog that is topped with chili, cheese and Fritos.

The diner also has an extensive menu of breakfast items (such as omelets, pancakes and a Beanie’s Weenies Scramble consisting of scrambled eggs with hot dogs and cheese, served with hash browns and toast) that are available all day.

The diner also serves other sandwiches, such as hamburgers, The Historic Trempealeau Hotel’s Walnut Burger, a spicy black bean burger and grilled cheese. And it has several side dishes, such as potato tots and French fries that are cooked with an air fryer, cottage cheese, fruit cup and macaroni and cheese.

“A lot of people have pitched in at some point,” she said, including Dave Bean’s mother, Donna Bean, who was busy serving up ice cream cones when a reporter visited.

“She was with us when we went to the auction and bought all of the tables and everything in Michigan,” Cheryl Bean said of Donna Bean. “She was excited that we bought the malt mixer. She used to work in a pharmacy and remembers the days when they would make the malts.”

“We were the worst-kept secret in Westby,” Misty Bean said of the diner’s debut. “We planned to do just a soft opening” but word that the diner had opened spread quickly throughout the community, she said.

IN PHOTOS: Scenes from around the region this week

Sittin' on the Pettibone dock

Zipper in Action at Steamboat Days

Games and Rides at Steamboat Days

Rides in action at Steamboat Days

Rides Set Up at Steamboat Days

WHAT: A retro-themed diner that opened June 8. Its tables, chairs and some of its equipment and decor came from a 1960s-era diner in Michigan.

WHO: The diner is owned by Dave and Cheryl Bean. Its general manager is their daughter-in-law, Misty Bean.

Don't get scammed out of your retirement

Forgotten expenses you should remember to budget for

Forgotten expenses you should remember to budget for

Laurie and Dave Janzen have been operating Lansing Hardware & Service at 238 Main St. in downtown Lansing, Iowa, for eight years.

5 mortgage trends to watch for the rest of 2021

Here are housing trends to watch for in the final months of the year. Also, check out more of the week's best money reads from the experts.

Maximizing your benefits can make for a more comfortable retirement.

The Best Reason to Take Social Security Long Before Age 70

Should you claim Social Security before you've hit your 70th birthday?

The King Street brewpub needs more capacity to meet demand and wants to do its own canning for retail sales.

The La Crosse tavern originally was built to cater to quarry workers on Grandad Bluff.

Cheryl and Dave Bean sit at a counter at their new Beanie’s Diner restaurant in Westby. Their daughter-in-law and diner general manager, Misty Bean, and Misty’s daughters, (from left) Marley and Moxley, are behind the counter.