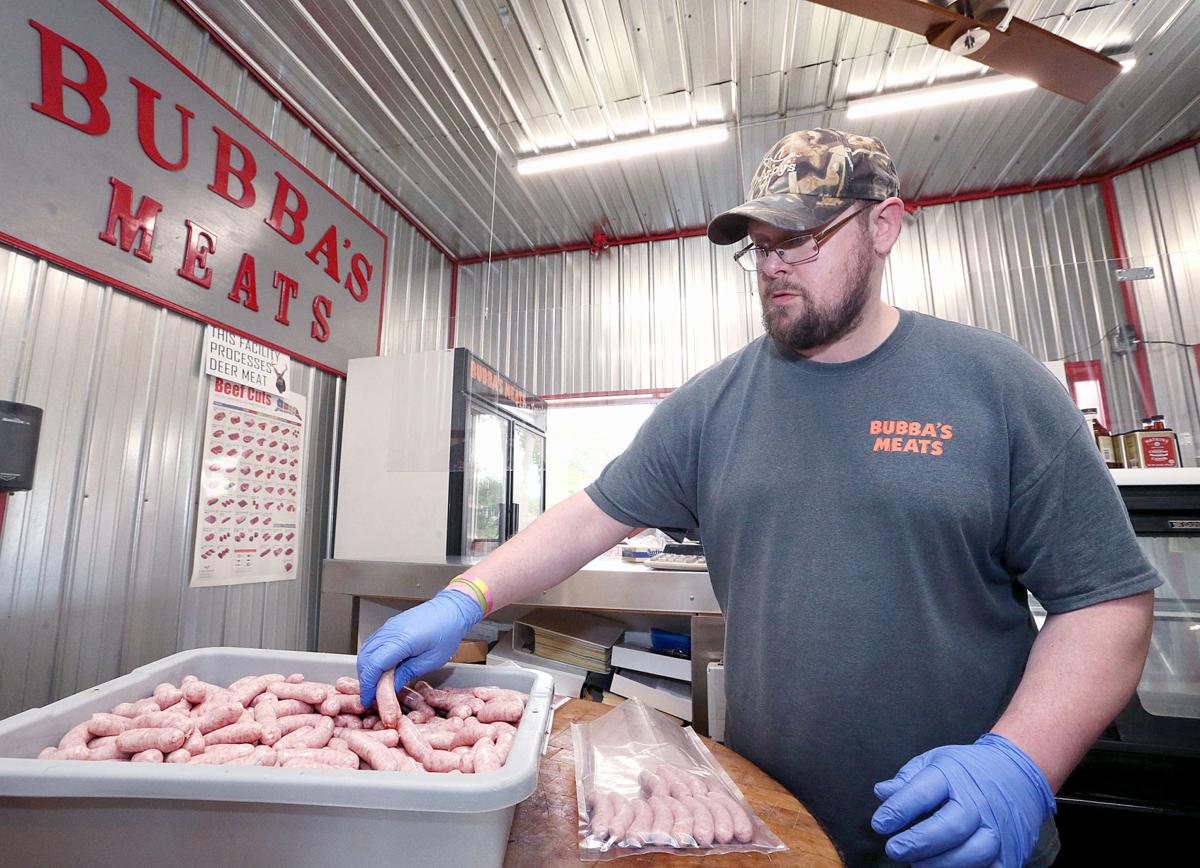 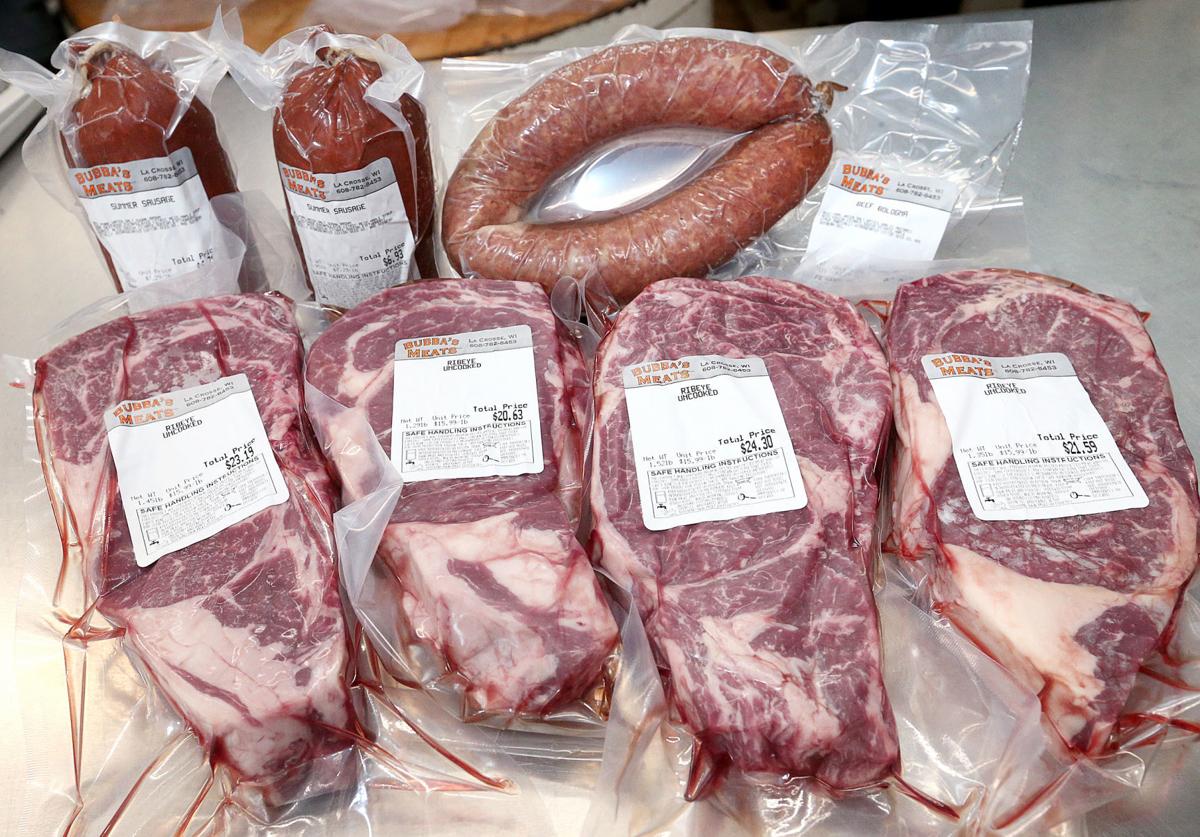 Rib eyes, summer sausage and beef bologna are among the most popular items at Bubba’s Meats.

Business continues to grow at Bubba’s Meats, which Lee Tabbert opened nearly seven years ago at 1248 Redfield St., in a building that has been a meat market for all but one year since it was built 130 years ago.

“In the last couple years, it’s really kicked in,” Tabbert said of sales increases at Bubba’s Meats, which he opened in November 2013 and enlarged two years ago. He said he thinks business has increased because “Our name is getting out there to the public,” partly because of awards his shop has received in “best of” contests in which area consumers vote.

The coronavirus pandemic has been another factor in this year’s sales increases, because consumers seem to like the precautions the market has taken, Tabbert said.

“I think it’s because we took steps right off the bat, such as limiting the number of people who come in” to two people at time, he said. “And we encourage people to do online ordering or to phone in orders” in advance. “And if they feel more comfortable doing it, we can meet them outside (the store) and hand the products to them.” Also, two large plexiglass shields were installed at the meat counter.

The building has housed a meat market for all but one year since it began in 1890 as the Lang Brothers Meat Market.

In 2013, Tabbert bought what had been known as Breidel’s Meat Market from Dave Breidel after it had been operated for 58 years by the Breidel family. Dave Breidel wanted to retire from the business that his father, Leonard Breidel started in 1955 at another La Crosse location.

Using Breidel’s recipes and some that he has developed himself, Tabbert continues to make the market’s signature products, such as hot dogs, ring bologna, turkey and beef jerky, summer sausage, snack sticks, breakfast sausage and double-smoked hams and bacon. He said he uses hickory wood to smoke products because “it provides unique flavor.”

The market also sells hamburger and fresh cuts of meat such as steaks, pork chops, beef and pork ribs, ham and chicken. And it processes deboned venison for deer hunters, as well as other wild game, which makes fall its busiest time of year.

Bubba’s Meats is probably best known for its hams and sausages, Tabbert said.

Tabbert said the market makes 13 varieties of bratwurst. Of those, its traditional German-style bratwurst is the biggest seller. “Second is probably our original (flavor),” he said. “It’s a little milder.”

Tabbert, 54, enjoyed making his own sausage products at home for several years, before he bought the meat market. “Now I do it every day, and I still enjoy it,” he said.

He had owned a drywall company for two years before buying the meat business. And before that, he had worked at three area screen-printing companies for nearly 30 years.

“I didn’t want to see it go away” when Breidel decided to retire, Tabbert said of his decision to buy the market.

He immediately renamed the business after his now 20-year-old daughter, Kaylee Tabbert, whose nickname within the family was Bubba. As a baby, she called her pacifier Bubba. Kaylee worked part time at Bubba’s Meats after it opened, but now attends Wichita State University in Wichita, Kan., where she is pursuing a degree in nursing.

Tabbert said he loves his job and owning his business. “If you enjoy your work, it’s not really work,” he said.

He said he most enjoys “the people and the compliments that we get. It makes you feel good to hear about people having their relatives over for Easter dinner, and having the best ham that they’ve ever had.”

WHAT: A meat market owned by Lee Tabbert since 2013.

SPARTA, Wis. — Eight years after he came up with the idea, Beau Burlingame and his wife, Jeanette, have opened their Beer Shop beer bar/beer s…

Steve Cahalan: Shenanigans’ future is up in the air

The owners of the Shenanigans family entertainment center and sports bar at 2100 Dawson Ave. on French Island have turned that space into Sere…

SPARTA — More than a century after a relative founded Arenz Shoe Co. in La Crosse, Mike and Cindy Arenz will start a going-out-of-business sal…

You’ve probably heard of Dave Rogers, who started Dave’s Guitar Shop 38 years ago and has sold equipment to such stars as the Rolling Stones, …

The owner of the longtime Mr. Burger food truck in Sparta has opened the Mr. Burger II restaurant at 215 S. Water St. in that community’s downtown.

Members of the Ed and Karin O’Brien family will open their new Sugar Shack ice cream and candy shop on Saturday in Suite 101, next to The Mob …

How to Build Up Your Credit from Nothing

How to Build Up Your Credit from Nothing

Rib eyes, summer sausage and beef bologna are among the most popular items at Bubba’s Meats.