The spread of coronavirus around the world, and government efforts to stop it, are having a major impact on La Crosse-area restaurants.

Many have closed temporarily, and some others are offering take-out and/or delivery service, which is all that Wisconsin bars and restaurants are allowed to have under state rules that took effect March 17.

The Freighthouse Restaurant is offering a limited carryout menu with many of the eatery’s most popular items, from Thursday through Sunday, co-owner Jon Erickson said. Orders can be placed from 4 to 7 p.m. those nights by calling the restaurant, which during normal times is open seven days a week.

The Freighthouse Restaurant’s sales volume during that first carryout-only Thursday-through-Sunday, was only about 10 percent of what it normally would be for those days, Erickson said. The number of dinners ordered has ranged from about 20 to 50 per day.

“The customers have been super generous,” Erickson said. “(Historically) A lot of times people don’t tip on a carryout. But they’re (now) tipping very well, which is nice.” About 15 employees have been working at the restaurant, down from the usual 60.

“I offered hours to people if they wanted to work,” although it would be fewer hours than usual, Erickson said. Some who wanted to work are helping with various projects such as installing a new dishwasher for the main dining room, deep cleaning and preparing the restaurant’s “back dock” outdoor patio area for its seasonal opening – whenever that is.

Erickson said he thinks a number of local restaurants are undertaking projects while they’re shut down or operating with only take-out and/or delivery service.

Erickson said he decided to stay open and offer carryout service “because I wanted to have some work for the people who wanted to work.”

He also said he doesn’t know of any local restaurants that may have permanently closed because of coronavirus and the resulting government rules. “I hope everyone comes out of it,” he said, adding that restaurants probably will end up “a little leaner” than before.

The sales volume at Rosie’s Cafe at 2225 S. 16th St. is about 15 to 20 percent of what it normally is, said Doug Kerns, who owns the business with his wife, Teresa.

Their cafe is offering take-out service as it always has, and has added delivery service with the elimination of on-premise dining because of the state’s new coronavirus rules. “We’ve never had delivery service and never accepted credit cards until now,” Kerns said. The deliveries are made by cafe employees.

“We’re consistently sending a message to anyone working here to keep a 6- to 10-foot distance from each other,” Kerns said. Six employees are working at the restaurant, down from 18 before the coronavirus-related state rules came out.

Besides preparing and packaging food, and cleaning, “We’re also taking this time to do some little projects around here that we never got to” before, Kerns said.

The two Lindy’s Subs & Salads in downtown La Crosse and in Onalaska are continuing to offer curbside carryout as well as delivery, said Deanna Wolf, who owns the restaurants with her husband, Mike.

“Our business is down at least 50 percent” from normal at the Onalaska location, which she manages, Wolf said. “The La Crosse store has been impacted a little more” than that. One of the Onalaska restaurant’s four full-time employees has been laid off.

“Everyone’s hours have been cut,” Wolf said, adding, “I have a lot of part-timers who are in college or high school. They’re OK with not working as much.”

Wolf said she and her husband decided to keep the restaurants open with carryout and delivery because “We wanted to be able to provide jobs. And this is our livelihood.” They also don’t want people to forget about Lindy’s, she said.

Although sales are down, Wolf said, she is “pleasantly surprised” they haven’t declined as much as she had expected.

Drive-thru service has long been a major source of sales for the Culver’s restaurant chain, noted Jake Bowe, who with his wife and his parents own the two Culver’s locations in Onalaska. “We’ve seen probably a 20 to 30 percent decrease” in sales since the state allowed restaurants to offer only take-out and delivery service, he said. “All of our business is drive-thru” since the new rules took effect.

Most of the two Onalaska restaurants’ employees are working fewer hours than before, Bowe said. And both Culver’s now close earlier — at 9 p.m. rather than 10 p.m., he added.

“A lot of the other retailers have reduced their hours,” Bowe said. “So they’re closing earlier. That’s led to less traffic” at the two restaurants.

“We’re one of the few restaurants designed for drive-thru and carryout,” Bowe said. “A lot of the sit-down restaurants aren’t designed to do take-out.”

Rudy’s Drive-in in La Crosse opened for the season on Friday, a week later than usual, with no inside dining and all food and beverages packaged to go, in order to comply with the new state coronavirus-related rules. Customers were asked not to consume them on the drive-in’s premises.

Most La Crosse-area restaurants that normally offer inside dining have closed temporarily because of the coronavirus-related state rules, said drive-in owner Gary Rudy, who also is president of the La Crosse chapter of the Wisconsin Restaurant Association.

Some local restaurants that normally have inside dining tried offering carryout and/or delivery service, but some of those have discontinued that and temporarily closed.

For example, Fayze’s and North Country Steak Buffet tried offering carryout service for a few days before announcing on their Facebook pages that they were discontinuing that. (During the past week, subsequent Fayze’s Facebook posts offered opportunities for people to order cinnamon rolls and brownies for local delivery.)

Piggy’s Restaurant & Blues Lounge opted to close temporarily after Gov. Tony Evers ordered a halt to in-house dining on March 17. As of Friday, Facebook pages and recorded telephone messages for some other major downtown La Crosse restaurants showed that The Waterfront Restaurant and Tavern was offering carryout food, Dublin Square Irish Pub & Eatery was offering limited menu carryout and delivery, and the Three Rivers Lodge Restaurant and Bar and the 4 Sisters Wine & Tapas Restaurant both had closed until further notice.

For more information on which area restaurants have temporarily closed and which have not, check their websites or Facebook pages.

The Tribune also has been publishing a daily list of restaurants in the La Crosse and Winona areas that are offering pick-up and/or delivery service.

The new German-themed La Crosse Bierhaus, and new locations for Fathead Steve’s Bar & Grill and for RootinCrown are in this week’s local business news.

Steve Cahalan: Gino's, other businesses opening up in area

Hello and welcome: Robot waiters to the rescue amid virus

RENESSE, Netherlands (AP) — You can always count on a robot for perfect timing.

MISSION, Kan. (AP) — Public pools will look very different this summer if they open at all with the coronavirus threat still looming, as staff…

Walmart shoppers did not limit their purchases to just essential items, using their federal stimulus checks to buy clothing, TVs and video games.

FORT LAUDERDALE, Fla. (AP) — SeaWorld and Walt Disney World will reopen in Orlando, Florida, in June and July after months of inactivity becau…

ONALASKA — In the two months since the coronavirus pandemic prompted governors of many states to issue stay-at-home orders, more people with m… 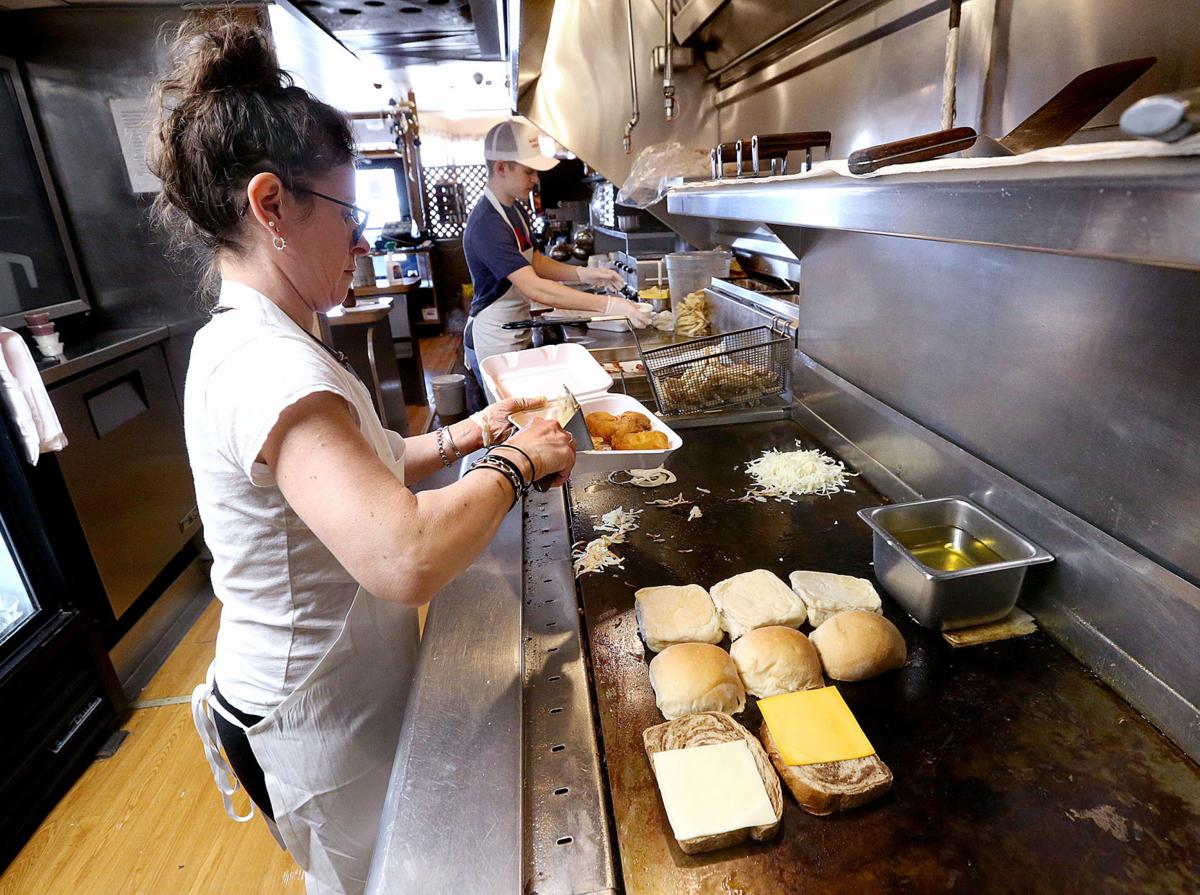 Teresa Kerns, who owns Rosie’s Café with her husband Doug, prepares to-go orders March 27 at the eatery at 2225 S. 16th St in La Crosse. The South Side neighborhood hub has managed to do a reasonable amount of business during the take-out or delivery only period imposed on restaurants and bars by Governor Tony Evers during the COVID-19 outbreak. Click here to read more. 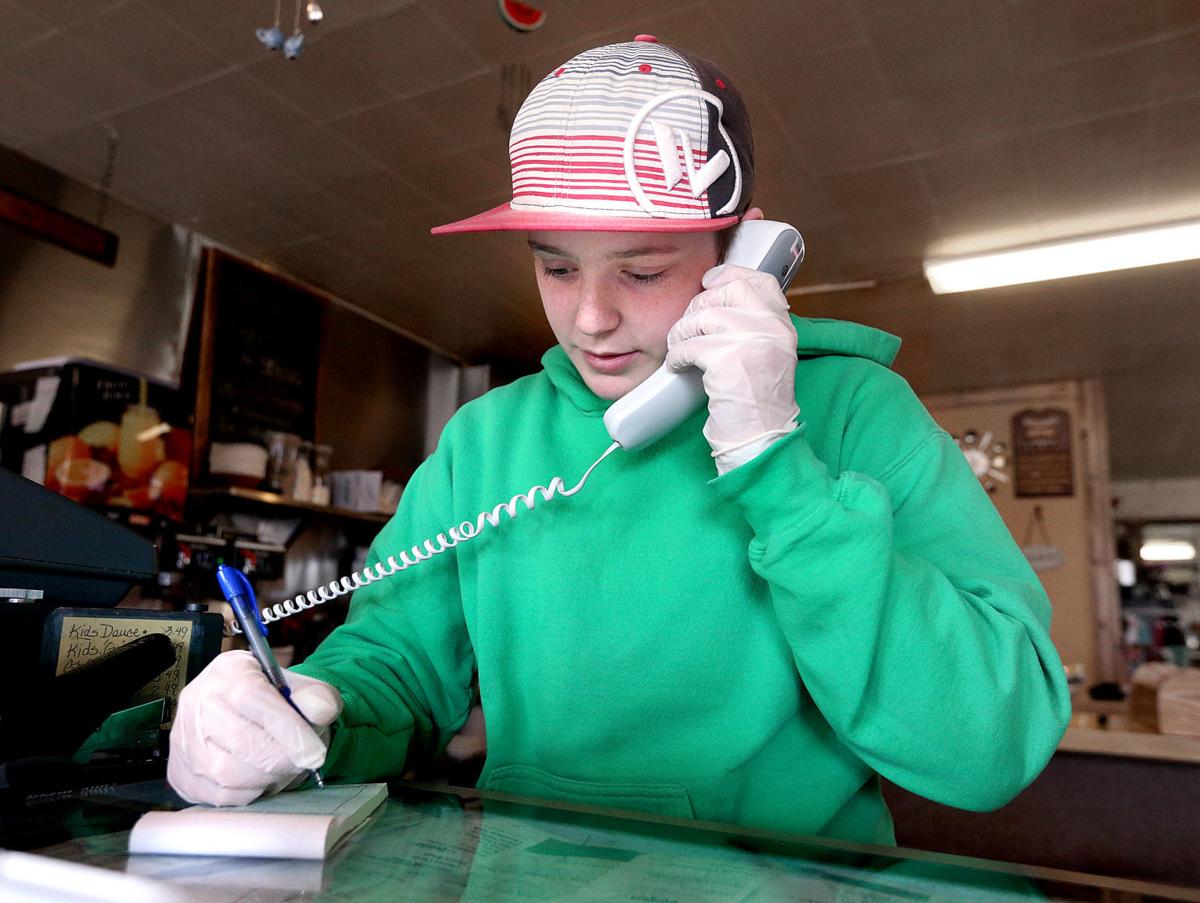 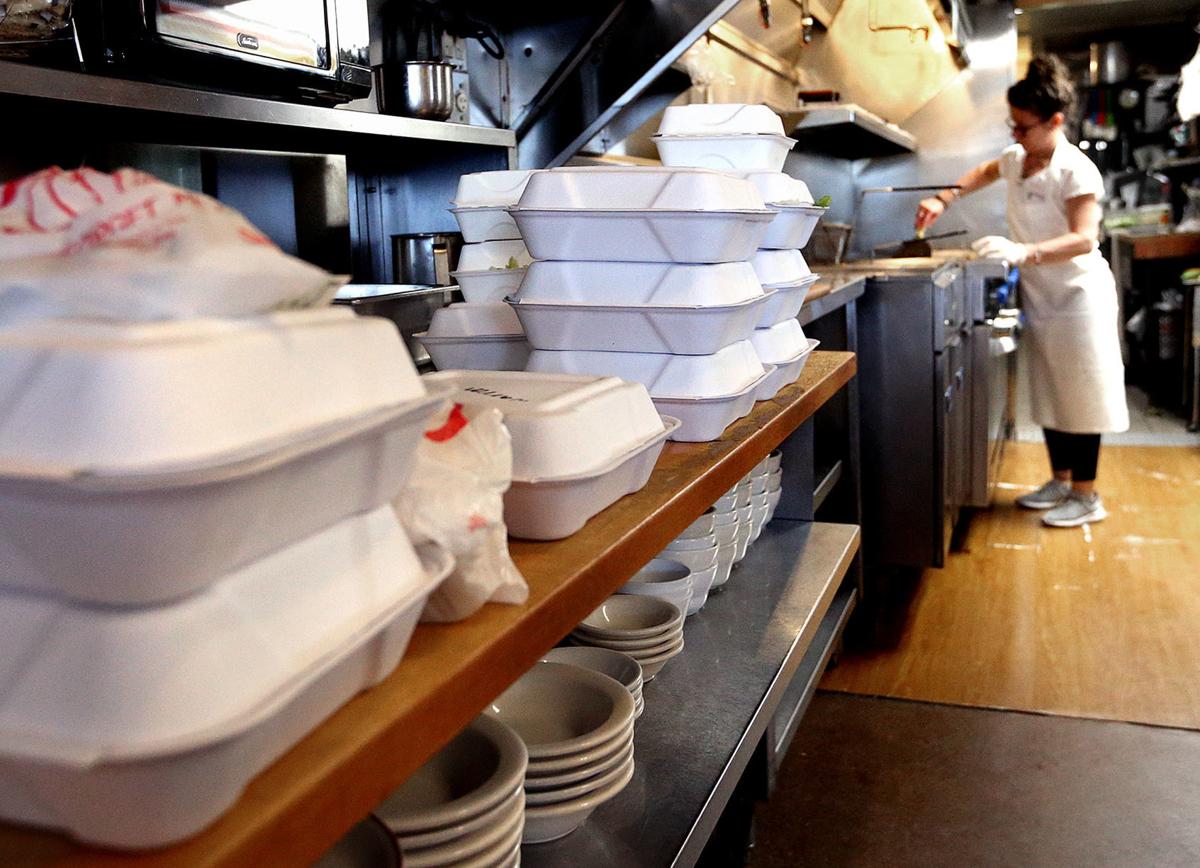 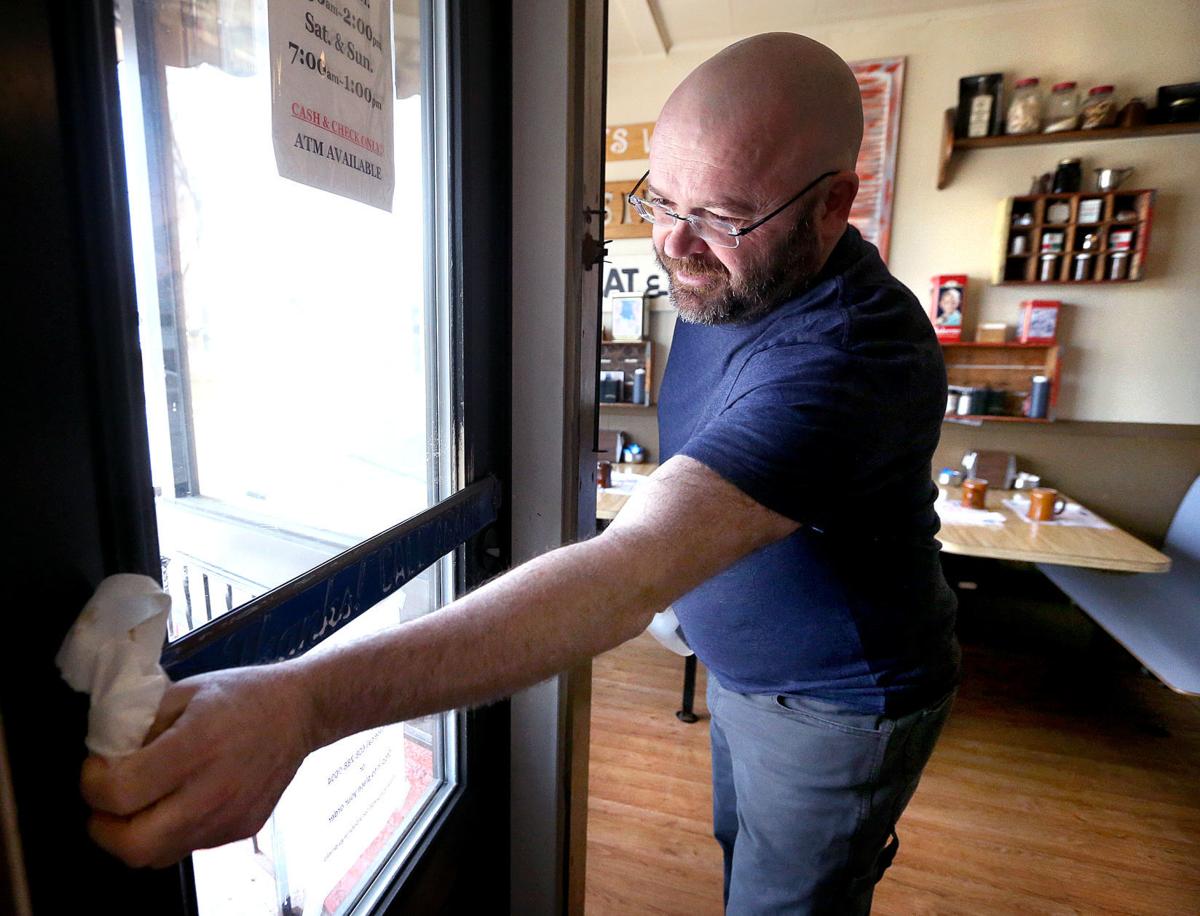