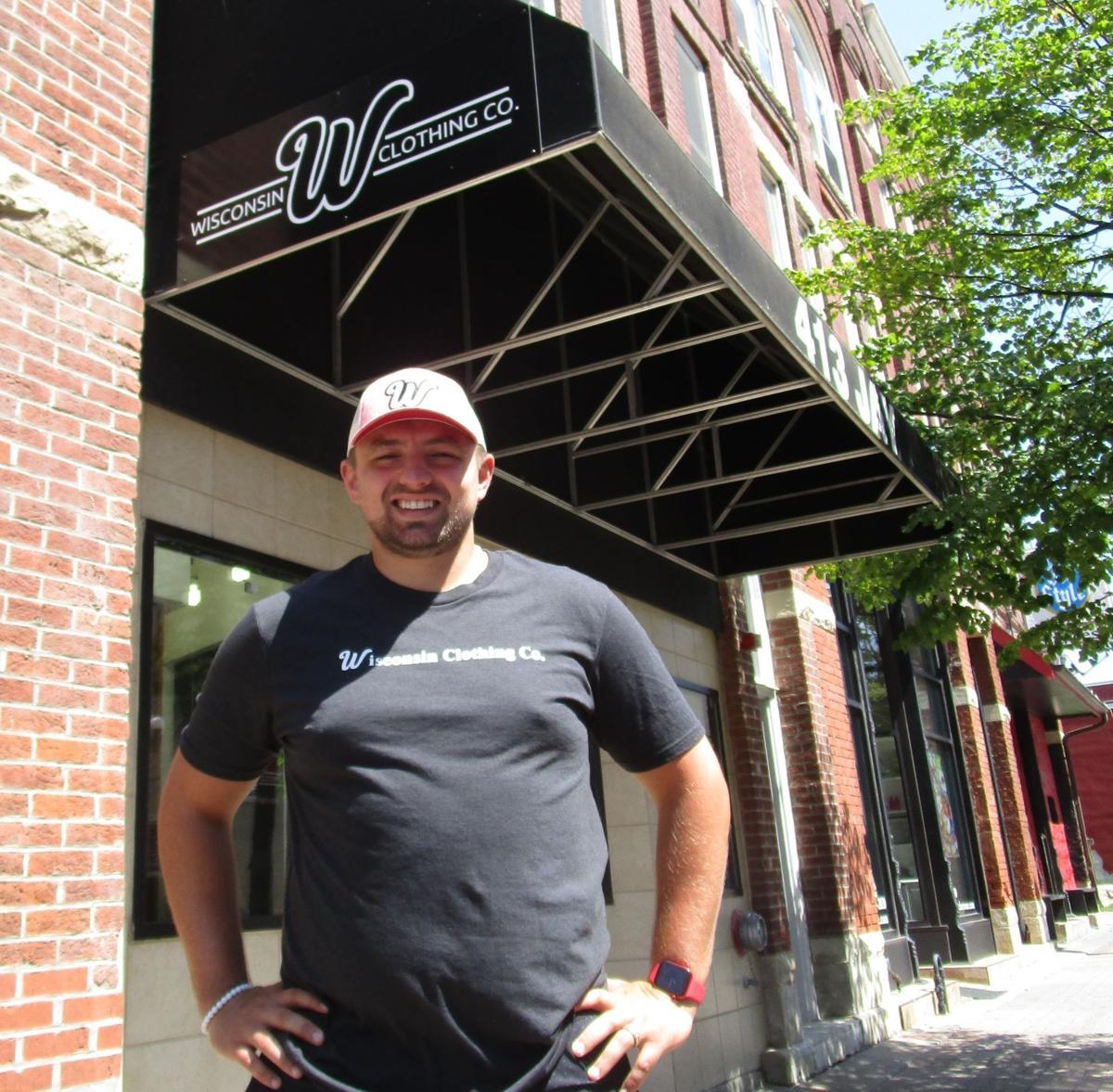 Corey Kaiser is one of the owners of the new Wisconsin Clothing Co. store at 413 Jay St. in downtown La Crosse. 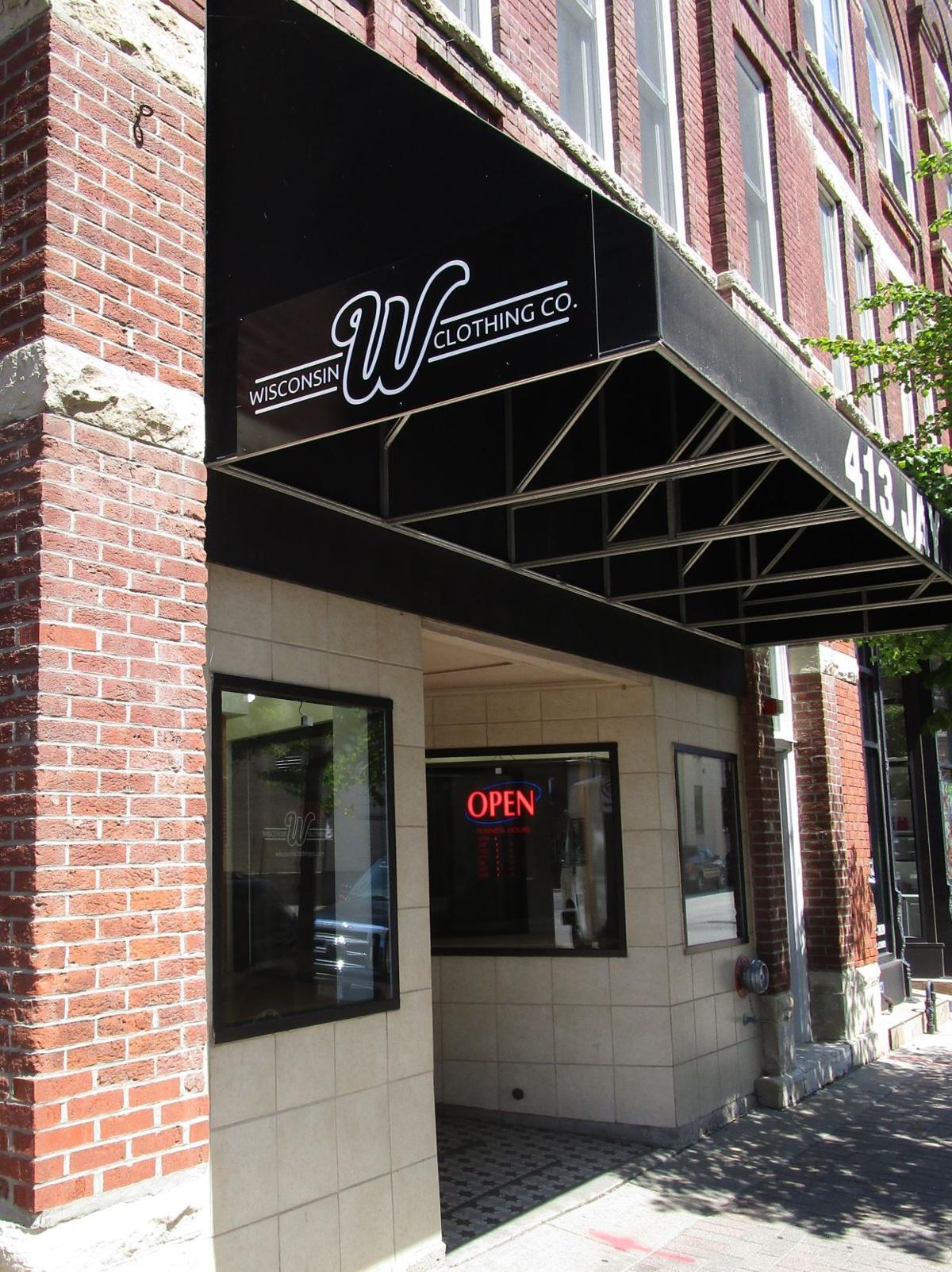 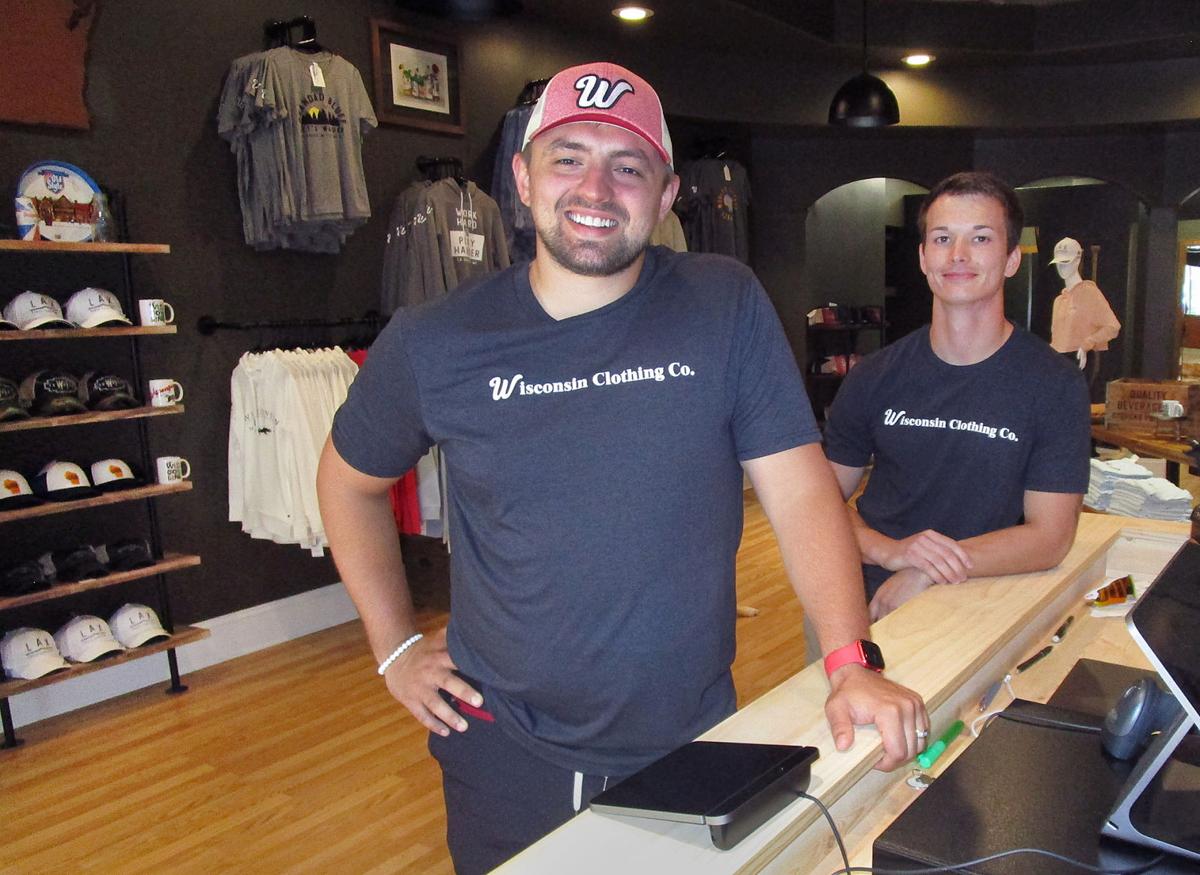 From left are Corey Kaiser, one of the owners of the Wisconsin Clothing Co., and Joel Fawcett, manager of the firm’s new store, which opened Aug. 11 at 413 Jay St. in downtown La Crosse.

Wisconsin Clothing Co., which mainly sells locally-themed and Wisconsin-themed athleisure apparel, saw La Crosse as the perfect location for its second store, one of its owners says.

That led to the store’s opening on Aug. 11 at 413 Jay St. in downtown La Crosse, said Corey Kaiser, who owns the business with his wife, Teah, and his sister, Amanda Kaiser.

“We thought this would be a perfect spot to expand of our business,” Kaiser said of downtown La Crosse, which he said somewhat reminds him of Dubuque.

“Even though La Crosse is a way bigger town than where I’m from, it still gives off the same feel and community vibe that we get in our smaller towns in the southwest part of Wisconsin,” Kaiser said.

He hopes to add more stores around the state in the next several years.

The business also does video segments on its YouTube channel in which it explores “cool communities” in the state, Kaiser said.

Athleisure apparel, which accounts for most of Wisconsin Clothing Co.’s business, is a style of clothing that can be worn as athletic apparel but also is suitable for casual, everyday wear.

It soon will have Oktoberfest apparel, as well as apparel that bears the numbers of a Wisconsin telephone area code, such as 608. Each area code in the state will be represented in the store’s collection.

The new La Crosse store also sells five varieties of scented candles developed and made for it by the Velvet Couch Candle Co. in Bangor.

Besides retail sales at its Kieler and La Crosse stores, Wisconsin Clothing Co. sells online and will wholesale apparel to other retailers. “We’re in three or four boutiques on and off throughout the year,” Kaiser said of his firm’s apparel. He plans to expand his company’s wholesale business, as well as its retail business.

Kaiser lives in Kieler, where he and a friend own the Kieler Mall Tavern, next to Wisconsin Clothing Co.’s Kieler store. “My parents used to run it when they were younger,” he said of the tavern.

Kaiser and his father also are developing the new Parkside Estates residential subdivision on the outskirts of Kieler.

His sister, Amanda, is busy owning and operating AJ’s Boutique in Dubuque.

The embroidered and screenprinted apparel that Wisconsin Clothing Co. sells comes from Brand L Embroidery & Screenprinting in Kieler, a business that Kaiser’s parents own. Brand L also has a location in Lancaster.

WHAT: A business that mainly sells Wisconsin- and locally-themed athleisure apparel. Based in Kieler, Wis., it opened its second retail store on Aug. 11 in downtown La Crosse.

Here's what you should know if you're planning on purchasing an electric vehicle in the near future. Also, check out more of the week's best money tips from experts.

Last week the Coulee Region Business Center, in conjunction with the La Crosse Area Development Corporation, who is the management entity, hel…

Madison has bolstered its potential to become an artificial intelligence tech powerhouse within the last decade because of research activity, according to a new report from Washington D.C.-based think tank Brookings Institution.

Too Young to Claim Social Security? Here's Why You Should Pay Attention Anyway

Your future benefit depends on the choices you're making now.

A change from Fannie Mae means more mortgage lenders will consider rental payment history when deciding whether to make loan.

Corey Kaiser is one of the owners of the new Wisconsin Clothing Co. store at 413 Jay St. in downtown La Crosse.

From left are Corey Kaiser, one of the owners of the Wisconsin Clothing Co., and Joel Fawcett, manager of the firm’s new store, which opened Aug. 11 at 413 Jay St. in downtown La Crosse.