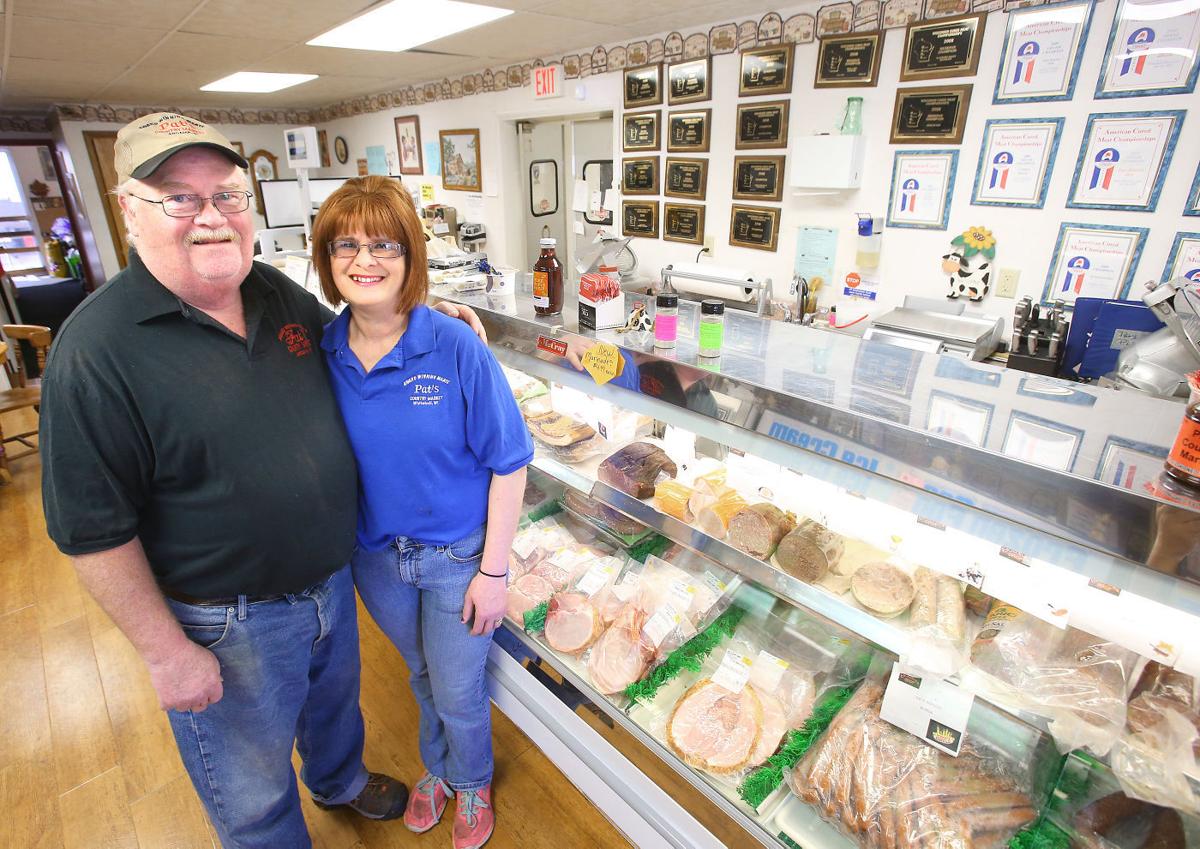 Tony and Marie Johnson own Pat’s Country Market. It was a well-known meat market in Arcadia for years, and the Johnsons bought and later moved it to Whitehall. 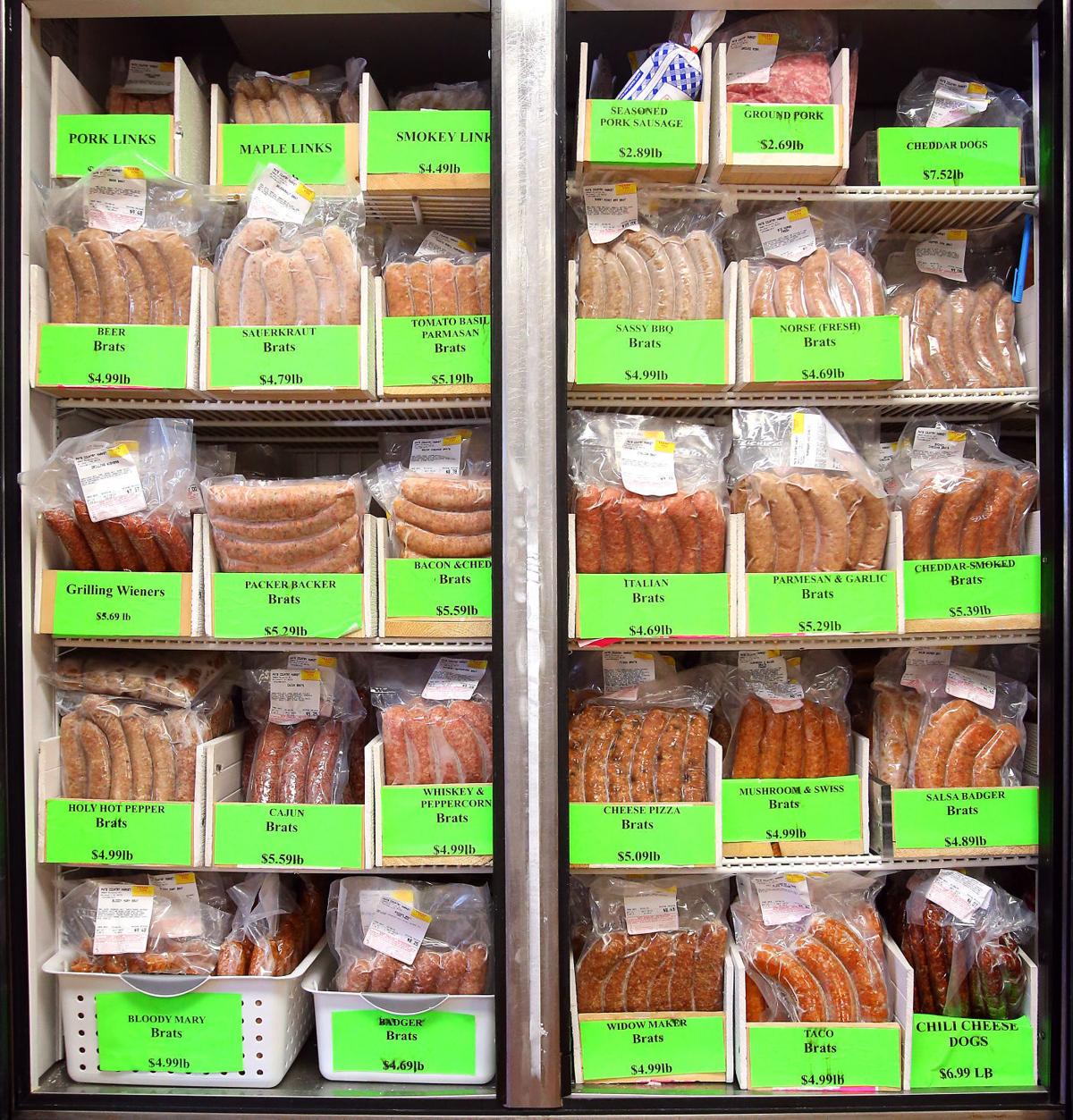 Pat’s Country Market in Whitehall makes over 40 varieties of brats.

That’s why, six years after it moved from Arcadia to Whitehall, customers are still driving to the market from as far away as La Crosse and Winona.

Tony and Marie Johnson, who have owned the business since 2003, moved it to 18461 Scranton St. in downtown Whitehall.

The Arcadia location closed at the end of January 2010 after the Johnsons sold the building to a developer who leveled it and constructed a new multi-tenant building. The market reopened in June 2010 at its current Whitehall location.

“The opportunity came up and the timing was right,” Tony said of the move to Whitehall, where he and his wife already were living in the home where he was raised. “The (Arcadia) building was old and it took a lot of electricity and heat.”

Tony began working for Pat’s Country Market owners Pat and Florence Nelson in 1979. The Nelsons had purchased the City Meat Market in Arcadia in 1963 and renamed it two years later when they moved to their second location.

In 1998, Tony married Marie, who also was working at the market in Arcadia. A year later, they moved to Whitehall and began commuting to work in Arcadia.

“Quite a few people still come here from places like Arcadia, Winona, Waumandee and La Crosse,” because of the market’s reputation for quality products, Tony said. But most customers live within 10 miles of Whitehall, he added.

“It was a name that was known,” Tony said of the couple’s decision to keep the Pat’s Country Market name when they moved the business to Whitehall.

The full-service meat market sells fresh meats and products such as sausage, bologna, wieners and bratwurst. It also processes venison, and it sells bakery products from Myers Bakery in Arcadia.

Bratwurst and summer sausage are the market’s two biggest-selling sausage products, which is why the Johnsons promote their business as the Wurst Haus in Whitehall.

“We keep 30 flavors on hand,” Tony said of the market’s bratwurst. “But we have recipes for over 50 flavors.”

The biggest seller is the Norse Brat, which Tony described as a traditional Wisconsin bratwurst.

Some other most popular flavors include mushroom and Swiss, garlic and onion, and the Packer Backer bratwurst made with aged cheddar cheese and green peppers.

Sales have continued to grow at the Whitehall location, Tony said, and peak from September through March. During the school year people are home more often, he explained. “During the summer, their kids are out of school and they travel,” he said.

“I enjoy visiting with customers,” Tony said. “We get to see people from around the area that we’ve seen for years and years.”

He also enjoys his trade.

“When you take a piece of raw meat, add spices and make it into a good-tasting sausage, that makes you feel good,” Tony said.

“When you take a piece of raw meat, add spices and make it into a good-tasting sausage, that makes you feel good.” Tony Johnson

ABOUT THE MEAT MARKET

WHAT: A meat market that moved in 2010 from Arcadia to Whitehall. It sells fresh meat and products such as sausage, bologna, wieners and bratwurst, and also processes venison.

WHERE: 18461 Scranton St. in downtown Whitehall.

WHO: Tony and Marie Johnson have owned the business since 2003.

HOURS: 8 a.m. to 6 p.m. Tuesday through Friday, 8 a.m. to noon Saturday and closed Sunday and Monday.

Tony and Marie Johnson own Pat’s Country Market. It was a well-known meat market in Arcadia for years, and the Johnsons bought and later moved it to Whitehall.

Pat’s Country Market in Whitehall makes over 40 varieties of brats.