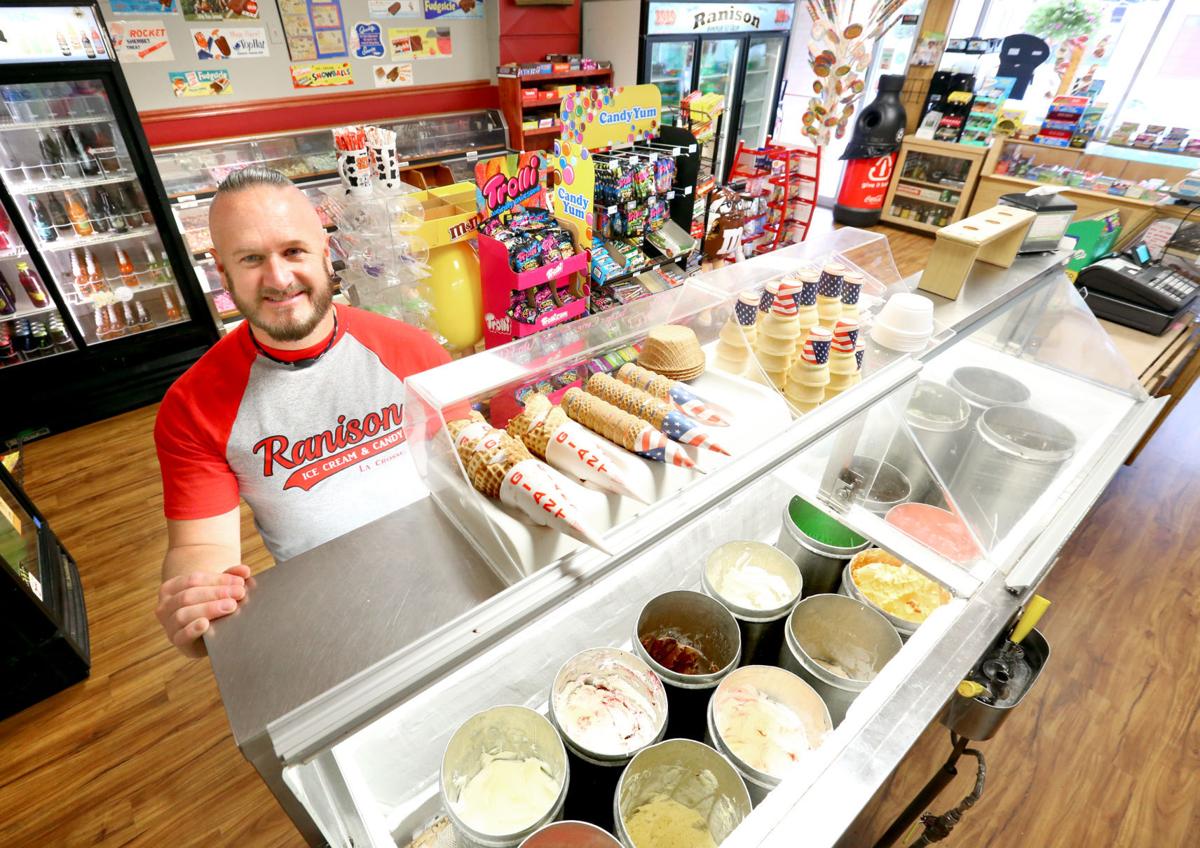 Dave Edwards, along with his wife, Kim, have owned Ranison Ice Cream and Candy since 1998. 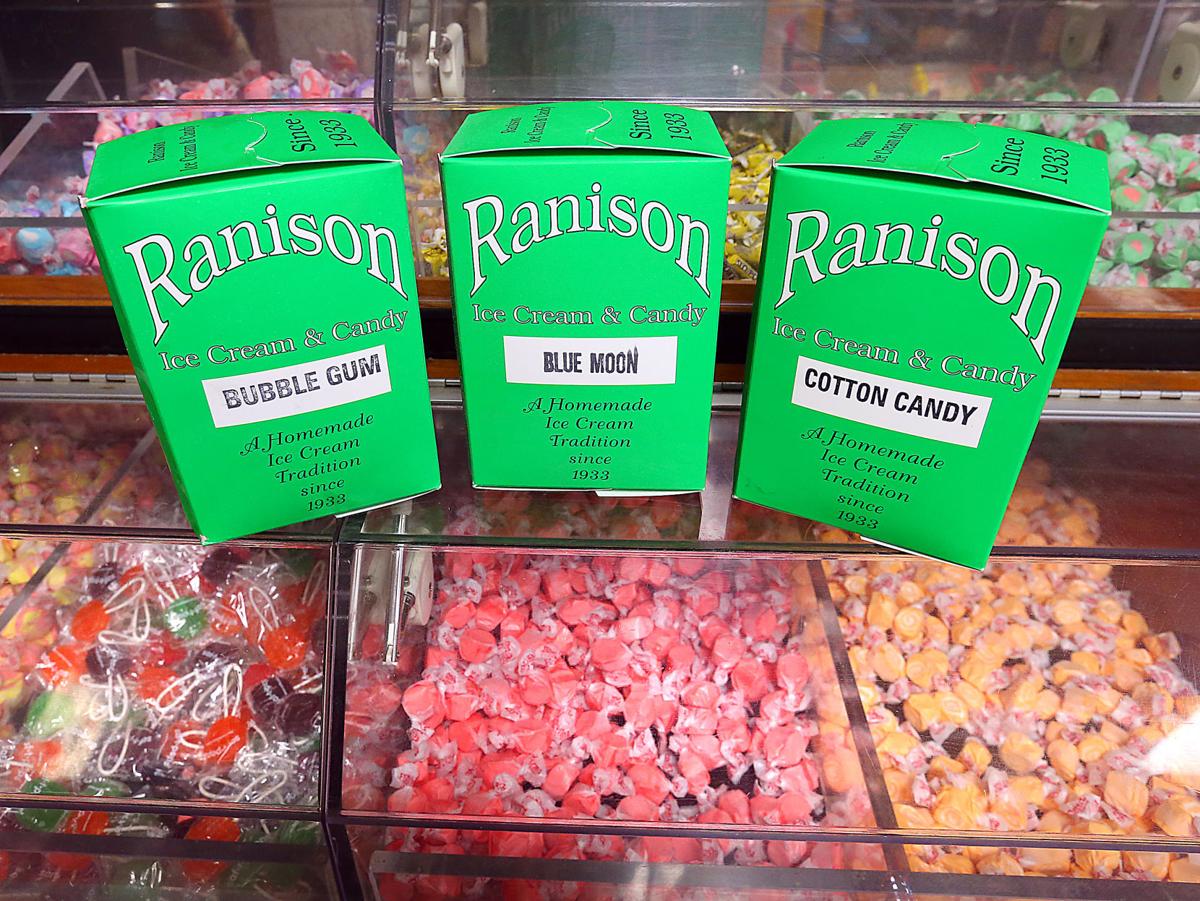 The Ranison Ice Cream and Candy Shop sells it’s ice cream by the half gallon as well as by cones.

Ice cream and hand-dipped chocolates made on the premises, as well as an expanding variety of nostalgic candy, draw customers to Ranison Ice Cream and Candy at 706 S. 16th St. on the South Side of La Crosse.

It’s been 18 years since Dave and Kim Edwards bought the business from Bruce and Bev Ranis, who had served up cones and malts on hot summer days for 39 years.

Dave Edwards had worked for the Ranises for five years before he and his wife bought the business in 1998. Dave works there full time. Kim helps run the business but also works as a literacy specialist at the nearby La Crosse School District Hogan Administrative Center.

“There aren’t too many of these (ice cream and candy) shops left in residential neighborhoods,” said Dave Edwards, who is 45. That contributes to his shop’s popularity, he said.

“A lot of kids can walk or ride their bikes here without having to cross busy streets,” Edwards said. “And this is a place where people can come, enjoy some family time, and it won’t break the bank.”

Ranison can seat about 16 people at its outdoor tables and chairs. The building isn’t large enough to have inside seating.

Edwards makes about 3,000 pounds of candy per year.

In the summer, he makes about 600 gallons of ice cream per week. That slows to about 200 gallons a week in the winter months.

Besides what Edwards and his seven employees sell at the store, he wholesales Ranison ice cream to six retail establishments in La Crosse, Galesville, Trempealeau and Warrens. That includes cranberry ice cream sold at the Wisconsin Cranberry Discovery Center in Warrens, and at the annual Warrens Cranberry Festival.

“Vanilla is still the best-selling ice cream flavor overall, because you can do so much with it — like shakes, malts, sundaes and root beer floats,” Edwards said.

Blue moon ice cream — with a taste somewhat similar to Fruit Loops cereal — is popular with children, while adults favor such flavors as maple nut, butter pecan and grape nut.

Ranison Ice Cream and Candy has more than 60 flavors of ice cream, and Edwards plans to continue adding new ones. “This year we’ve done caramel macchiato and salted caramel” for the first time, he said. Tiramisu and birthday cake ice cream were introduced last year.

Edwards also sells a large variety of hand-dipped chocolates. And he has been bringing in more and more old-fashioned candy. He added about a dozen kinds after he installed new flooring and rearranged the center of the store about two months ago. Some of the new sweets include Mary Jane, Bit-O-Honey, Slo Pokes and Pixy Stix.

“I want to get into more of the nostalgic candies,” Edwards said. “I think people are looking for that.” He frequently gets phone calls from people asking whether he sells a certain old-fashioned candy.

The business is seasonal, with ice cream leading the way in the summer months and candy in the winter months. Christmas is the store’s busiest holiday because of people ordering chocolates and other candy, followed by Easter and then Valentine’s Day.

Ranison Ice Cream and Candy also ships candy to former residents and others who call in orders.

Edwards plans to introduce smoothies next summer; he’s already bought the machine he needs for that.

He and his wife have four children, two of whom work at the store. A third child will start there this fall.

One child has mentioned an interest in operating the business after his parents retire. “But I’m not ready to leave this for quite a while,” Edwards said with a smile.

Running an ice cream and candy store can mean long hours, but he doesn’t mind.

“I like being my own boss,” Edwards said. “And a lot of the customers are regulars and you get to know them.”

WHO: Dave and Kim Edwards have owned the business since 1998.

HISTORY: The Edwards bought the business from Bruce and Bev Ranis. The building originally was a grocery store and is believed to have been built in 1871. Bob and Helen McVey opened the Super Ice Cream store there in 1933. Ranis bought the business from them in 1959 and in the early 1970s renamed it Ranison Ice Cream, a play on words that referred to him and his father Walter, who was a teacher at Logan High School.

Dave Edwards, along with his wife, Kim, have owned Ranison Ice Cream and Candy since 1998.

The Ranison Ice Cream and Candy Shop sells it’s ice cream by the half gallon as well as by cones.