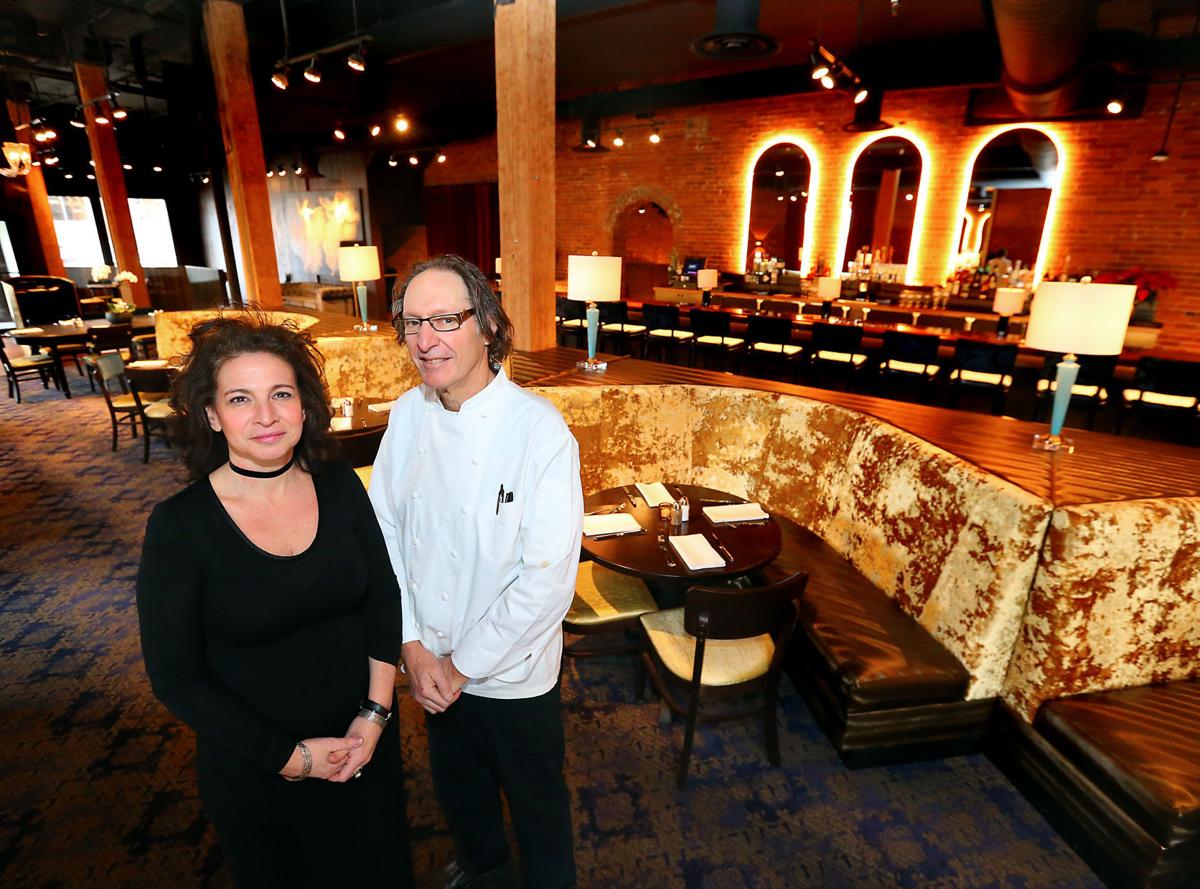 Joan Ferris and Jay Sparks have opened their new Lovechild restaurant in the former Hooters location. 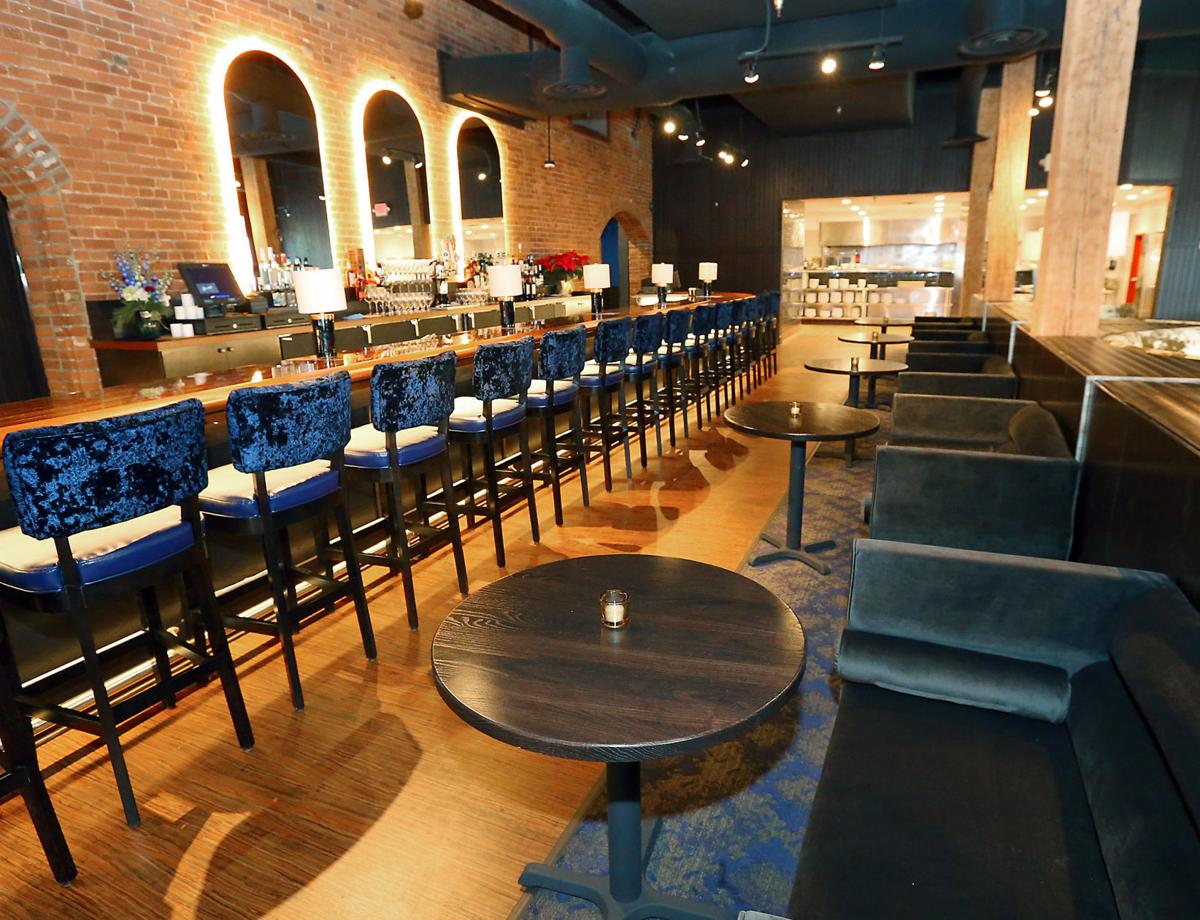 The lounge of the Lovechild restaurant has five loveseats and crushed blue velvet barstools.

Sparks and Ferris, who have been together for 25 years, say their casual fine dining restaurant offers uncomplicated food with intriguing ingredients and big flavors, using locally sourced and seasonally-driven ingredients.

They’ve gone to great lengths to create a warm, inviting atmosphere in the building, which has exposed brick walls, high ceilings and large windows.

“We wanted to be really cozy, with comfortable seats,” Ferris said. “Lighting was important. We wanted it to be visually beautiful, but with things you touch being soft and nice.”

People don’t have to dress up to go to Lovechild; casual dress is welcome.

“It’s a place where people can come in and relax and have a premium pasta (or other entrees) and a glass of wine and hang out,” Sparks said.

Lovechild’s dining room can seat 100 people and its lounge can seat another 31. Hours are 5 to 10 p.m. Monday through Saturday (and closed Sunday), although the lounge is open later than that.

Sparks and Ferris moved from Minneapolis to La Crosse in June. They live in an apartment a few blocks from Lovechild.

Both had spent two decades with the D’Amico & Partners family of restaurants in the Twin Cities and in Naples, Fla.

Sparks, who grew up in Tampa, Fla., served for nearly 20 years (until 2014) as executive chef for D’Amico’s full-service restaurants and has been influential in the Twin Cities restaurant scene. He was profiled in a 2013 Minneapolis Star Tribune story that was part of the newspaper’s “Great chefs of Minnesota” series.

Ferris joined D’Amico in 1991 as general manager of the acclaimed French Mediterranean restaurant Azur in Minneapolis, then went on to hold various corporate management positions with D’Amico.

Ferris said she and Sparks love the La Crosse area and had visited it frequently over the years. Her mother, Jean Ferris, lives in Onalaska.

Joan’s late father, Roger Ferris, had a shoe repair shop on Main Street for many years. Joan was one of 11 children in the family and said each of them worked in the shoe repair shop at some point.

Ferris and Sparks both left D’Amico in 2014, planning to open their own restaurant.

“We were going to (open a restaurant) in Minneapolis,” Ferris said. “But they were opening so many restaurants there and staffing was an issue. This spot (in La Crosse) came open and it’s such a beautiful building. Once we saw the space, we had to have it.”

“This is an amazing place” for locally produced food, Sparks said. Much of the food at the Minneapolis food co-op he belongs to comes from this area, he said. “The epicenter is Viroqua,” Sparks added.

Both Ferris and Sparks describe Lovechild’s menu as “eclectic.”

“With the center of gravity being the Mediterranean,” Sparks continued. “Right now it definitely has a little bit of an Italian feel because of the pasta selection. There are a couple things that have influences from Morocco. And we have one dish that is from Mexico – pozole verde.” The latter is a traditional hominy-based Mexican stew.

Some of Lovechild’s pasta selections include ravioli with braised beef, soffrito and butter; tortelli with sweet potato, cranberries, sage and ricotta cheese; linguine with clams, garlic and red chiles; and ricotta gnocchi with winter tomato sauce and pecorino.

Food and drinks are served by some of Lovechild’s more than 30 employees.

Ferris and Sparks said they’ve been impressed by how friendly area residents are and by the help they’ve received from their landlord, Fortney Cos.

WHAT: A restaurant and lounge that opened Dec. 9 in the former Hooters restaurant location at 300 S. Third St. in downtown La Crosse.

HOURS: 5 to 10 p.m. Monday through Saturday and closed Sunday. The lounge stays open later than that.

Here are the most-read stories about local businesses in the past year.

In the 15 months since Lovechild restaurant opened in downtown La Crosse, chef Jay Sparks has made a name for himself in the Coulee Region, an…

Joan Ferris and Jay Sparks have opened their new Lovechild restaurant in the former Hooters location.

The lounge of the Lovechild restaurant has five loveseats and crushed blue velvet barstools.