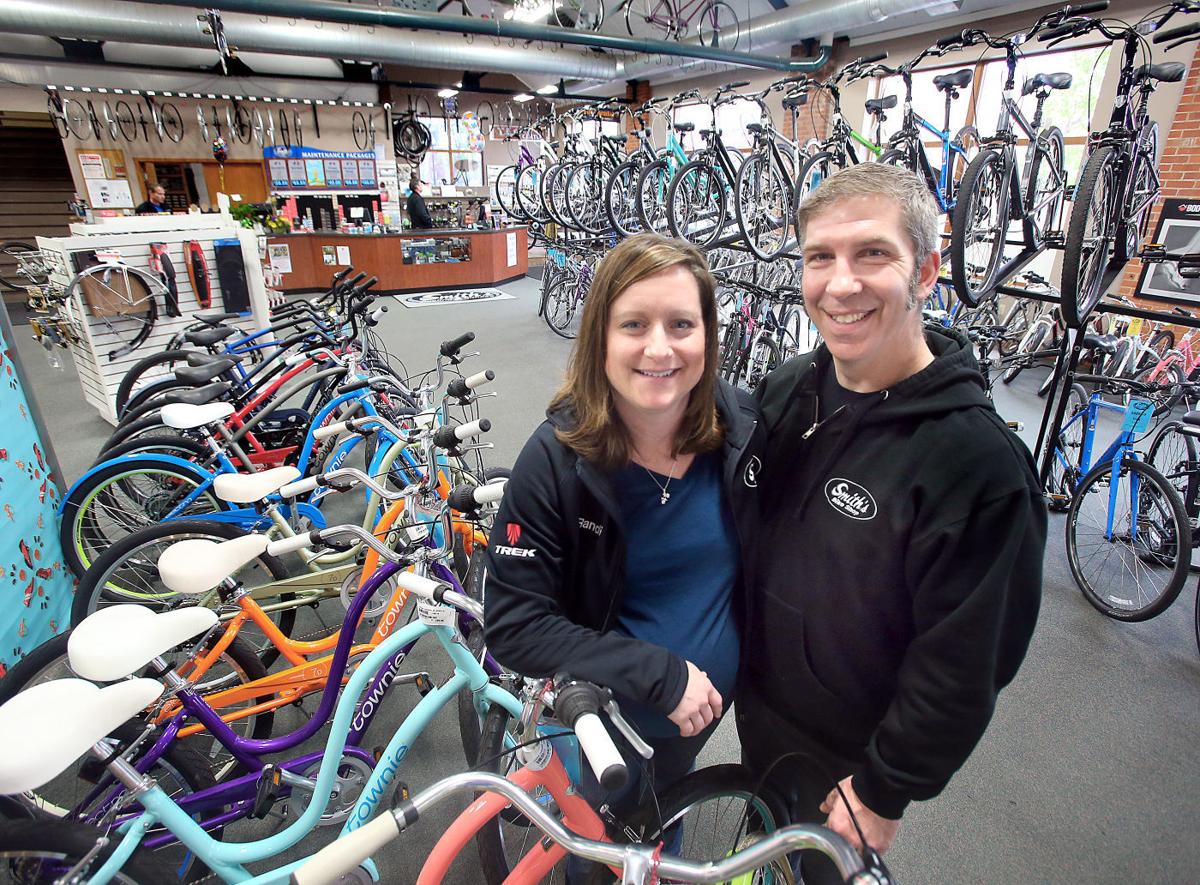 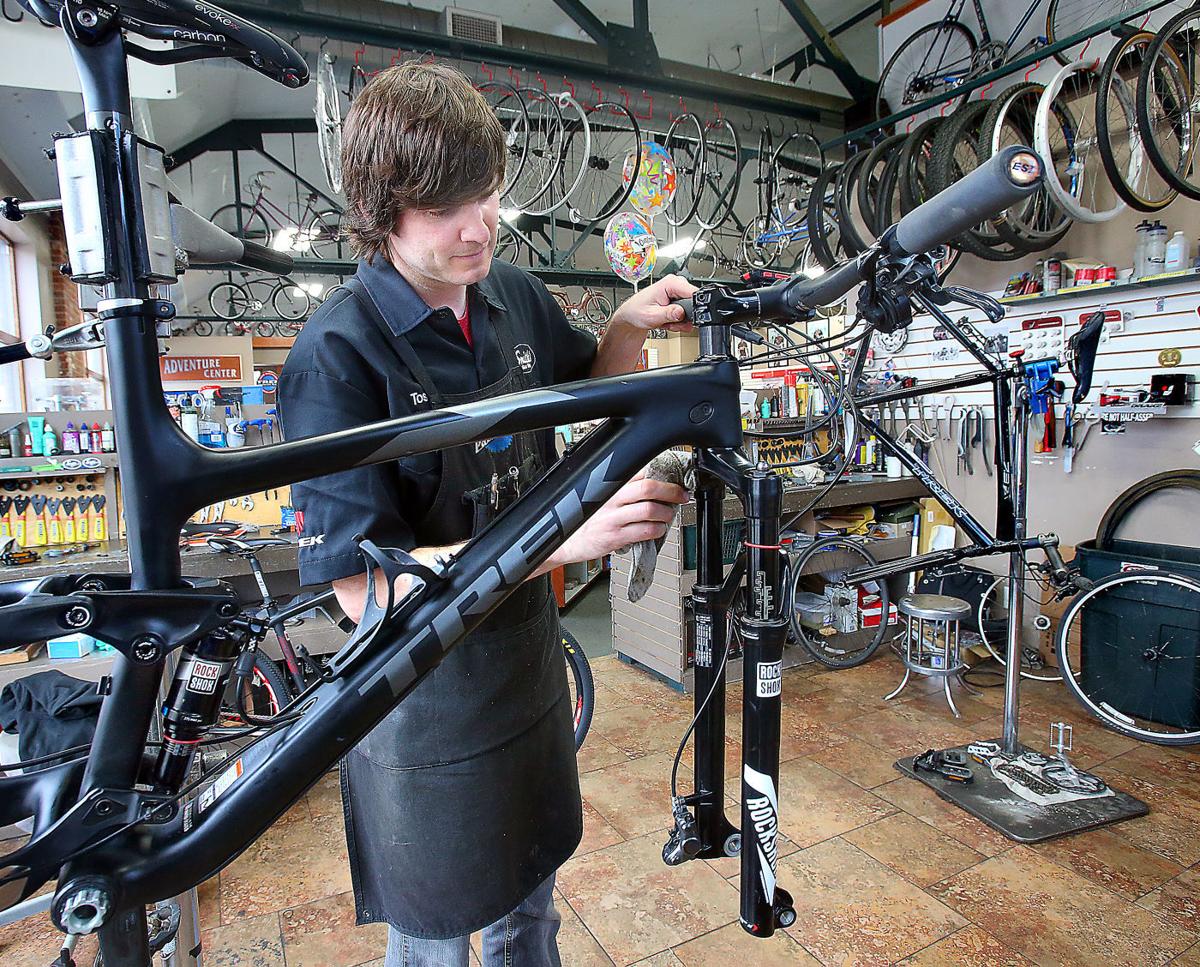 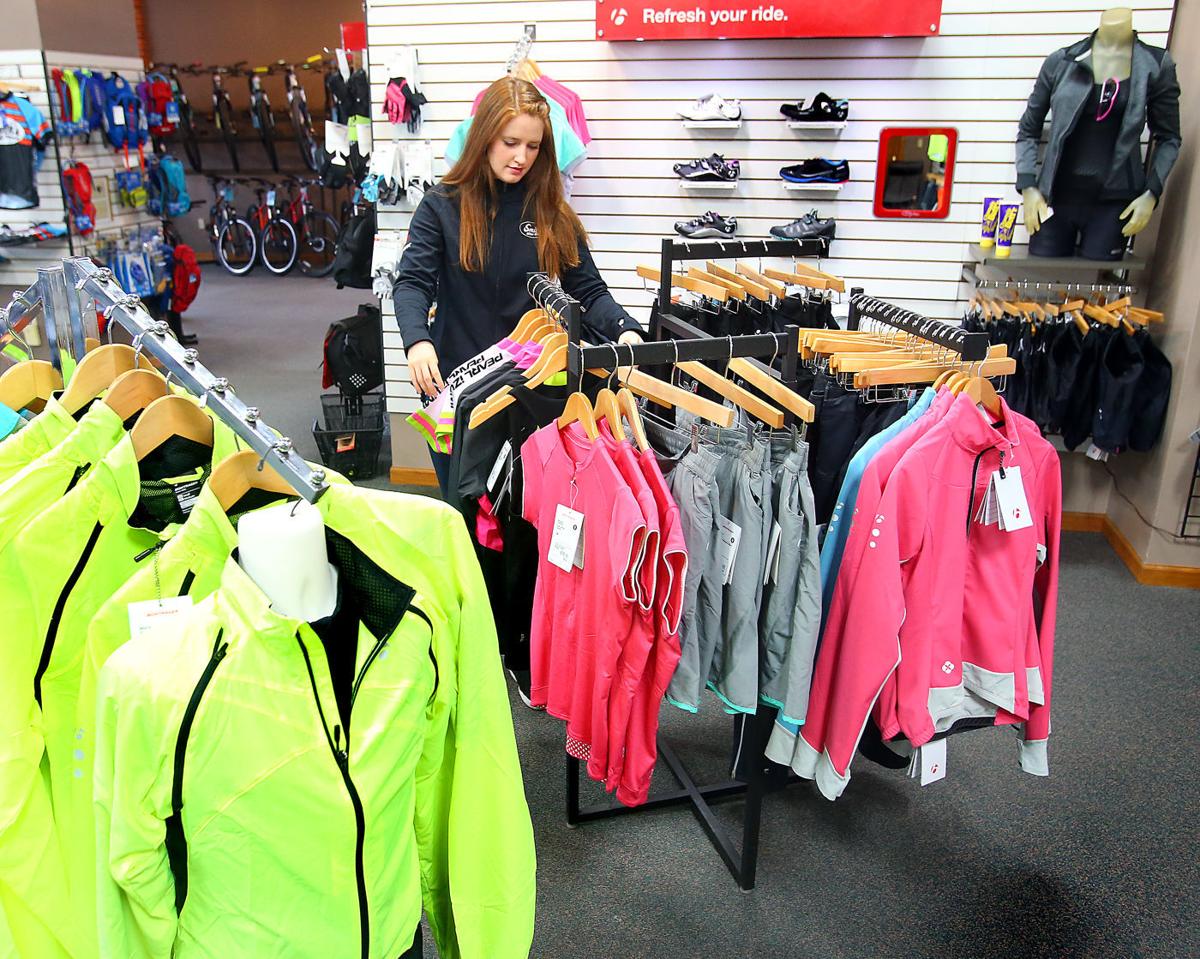 They bought Smith’s Cycling and Fitness at 125 N. Seventh St. from Carl and Lisa Johnson on April 15 and renamed it Smith’s Bike Shop.

The store has been phasing out fitness equipment over the past year, but can still order it upon request, Erik said.

“We’ll have more focus on bikes,” Randi said. And the store will increase its inventory of women’s bicycling apparel and accessories, she said, as those items are an “up and coming part of the bicycle market.”

The bike shop will continue to sell several brands of bicycles, with Trek as its main brand.

Randi said the store also will continue to be known for its service. “We’re huge with service,” she said. “We have one of the best (bicycle) service departments around.”

The Pueschners have about 10 employees, including four full-time mechanics and a few part-time mechanics. Their store services and repairs all brands of bicycles.

“We’re also looking to increase our community involvement” in such things as trail maintenance, group rides by bicyclists, and events held by outdoor organizations, Randi said.

The Marshfield, Wis., native got his start in the industry around 1992, when he began working at a bike shop in that community. He moved to La Crosse in 1995 and received an associate degree in marketing in 1998 from what is today Western Technical College.

“I started working on my bikes in my garage when I was a kid,” Erik said. “I was working on them with my dad’s tools when I was in middle school.” As a youth, he began entering BMX bicycle races. He moved on to racing mountain bicycles (which he still does) when he was in his 20s.

When he was in high school, Erik began thinking and talking about owning a bicycle shop someday. “This is doing what I and a few friends thought would be cool, owning our own bike shop,” he said of buying the bicycle shop.

She is 36 and a lifelong La Crosse resident. Randi graduated from Logan High School in 1998 and received a bachelor’s degree in marketing from the University of Wisconsin-La Crosse in 2002. She has held marketing jobs since then, and is active in the bike shop business.

“He’s passionate about bikes,” Randi said of her husband. “Customers can tell that.”

The bicycle shop has been in business for more than a century, and has been in its current location since 2002.

It draws customers from as far away as Prairie du Chien, Tomah and Winona, Erik said.

According to the La Crosse Public Library’s Archives Department, Joseph Smith started Smith’s Bicycle Shop in 1913 in the 500 block of South Eighth Street, although there had been a bicycle shop at that location since about 1896.

Carl and Lisa Johnson, who sold the business to the Pueschners, had purchased it in 1994. They moved it in 2002 from 520 S. Eighth St. to the current location at 125 N. Seventh St., which at one time was a Studebaker car dealership.

Carl Johnson said last week that he and his wife will continue to own and grow their Coalition Drum Shop and Coalition Boardshop and Indoor Skatepark businesses in downtown La Crosse.

WHAT: A store that sells, services and repairs bicycles.

WHO: The business is owned by Erik and Randi Pueschner, who bought it April 15 from Carl and Lisa Johnson. Erik has been working at the bike shop since 1996 and has managed it since 1998.

Two new La Crosse restaurants — Lovechild and Senor Villa — are in the works, in the former Hooters restaurant at 300 S. Third St. downtown, a…

After nearly 30 years, Whitehall artists’ works are still seen around the world

WHITEHALL — The images they create together at their home near Whitehall are seen by millions of people around the world each year.