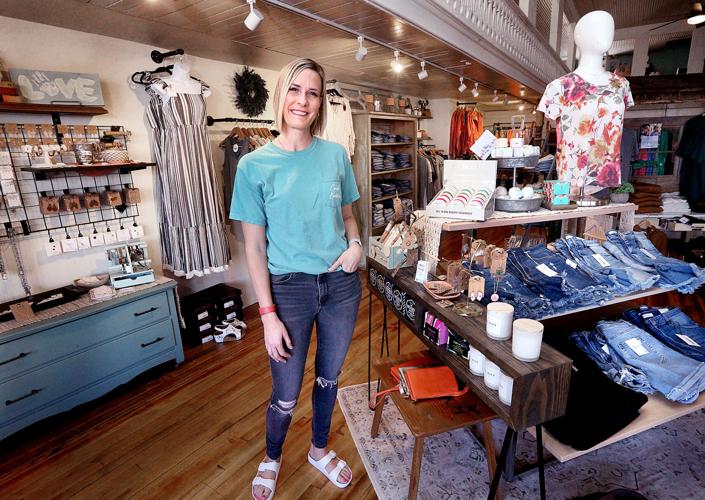 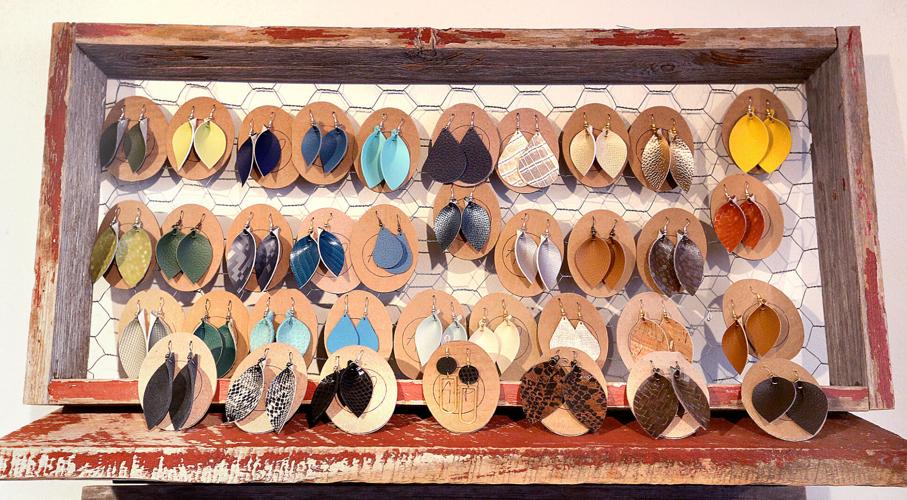 An assortment of locally made earrings are available at Coulee Boutique in Galesville.

STEVE CAHALAN For the Tribune

GALESVILLE — Former school teacher Anna Ledebuhr soon will celebrate four years as founder and owner of Coulee Boutique, as well as its recent move to a much larger storefront at 19865 E. Gale Ave. on the town square in downtown Galesville.

Ledebuhr, who with the move expanded the product lines she carries and added some new ones, tentatively plans to hold the boutique’s birthday party on June 11.

She started the business in June 2018 as a pop-up shop and online sales business, before opening a brick-and-mortar store in November of that year at 19871 W. Gale Ave., across the street from the store’s new location.

Coulee Boutique and The Treasure Chest gift shop announced in January that they were swapping spaces. The Treasure Chest will continue to use the third floor of the building that it occupied since 2003 to showcase larger items and home decor.

Coulee Boutique opened April 1 in its new location, a building where Casberg’s Department Store had operated from 1979 to 2002. Before that, it had been Gilbertson-Myhre Department Store since 1884, when the three-story brick building was constructed.

With the boutique’s move to its new, larger location, Ledebuhr has much more room to display merchandise. “And everything is under one roof now,” said Ledebuhr, whose office and some merchandise storage space had been in another nearby building.

“We carry the things that you need,” Ledebuhr said of her boutique’s merchandise. “And size inclusivity is really important to us,” so the boutique carries a large range of apparel sizes.

Besides apparel, she said, “We have lots of jewelry, shoes and other footwear, cards, stickers, skin care products, candles and soaps” including some merchandise made by area artisans.

Ledebuhr plans to feature area artisans on a regular basis on the north side of her store’s mezzanine level.

“My vision is to feature local makers,” she said. “We’ll feature them probably starting on Saturdays and depending on how that goes, we can incorporate doing that on Fridays as well. It would be like a little mini-market.” The first such event was held Saturday.

With a larger building, Coulee Boutique has five fitting rooms where customers can try on apparel. It had two fitting rooms at its previous location.

Ledebuhr has three employees besides herself and soon will have four. And her three children help “as needed,” she said.

“I really enjoy my wonderful team and the people around me,” she said.

The boutique also has online sales.

A native of Altoona, Wis., Ledebuhr and her husband moved to the area in 2007, the same year that she received a bachelor’s degree in education from Winona State University. “He was working in La Crosse and I had gotten a teaching job in Arcadia,” she said.

Ledebuhr taught math for 12 years, starting with one year as a teacher at Holy Family Catholic School in Arcadia. She then taught at Gale-Ettrick-Trempealeau Middle School for 11 years. She wrapped up her teaching career in the spring of 2019 so she could devote all of her time to the boutique.

“Teaching is a great job,” Ledebuhr said. “And you have your summers and your holidays. But I wanted more flexibility, with three little kids, to be able to take off and attend their school functions.” As a business owner, “Now I do have the flexibility to get up and go, so to speak,” she said.

Ledebuhr said she decided to go into the boutique business because “I really like clothing and fashions.”

She decided to do that in Galesville because “Being that this was the city where I taught for years, I feel a connection to the people of Galesville. And I had frequented many of the (retail) businesses before opening my own. Just seeing the support of this town just made it seem like a no-brainer” to locate the boutique in Galesville.

WHAT: A boutique that mainly sells women’s clothing and accessories, but also carries some gift items.

WHO: The business is owned by Anna Ledebuhr.

Also learn more about controversies at Airbnb and Whole Foods, plus view six charts tracking the markets. Here's a look at the week's top business and consumer news.

Biden said he is sympathetic to the union's demand, but he said a rail strike would cause too much economic damage and must be avoided.

The festive atmosphere has largely evaporated, but some shoppers have stuck with the tradition of waking early in the hunt for deals.

This could be the last holiday shopping season for Sears

It's been a slow, quiet death for the iconic chain, whose groundbreaking catalog and anchor position at many malls nationwide once made Sears both the Amazon and the Walmart of its day.

The Caledonia Gallery opens with a focus on local art

Jay L. Howard and Clare and Josh O’Brien opened The Caledonia Gallery on Oct. 28 at 115 E. Main St. in downtown Caledonia, Minn., with a focus…

An assortment of locally made earrings are available at Coulee Boutique in Galesville.