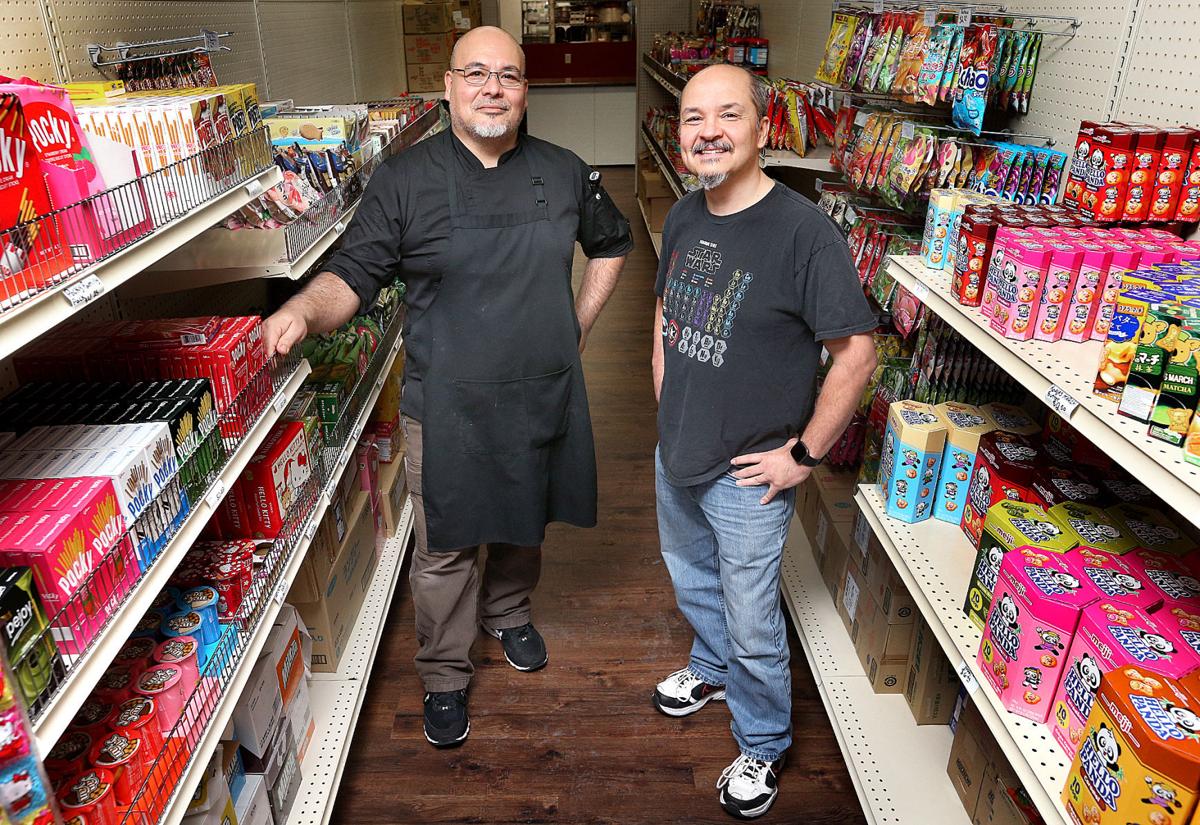 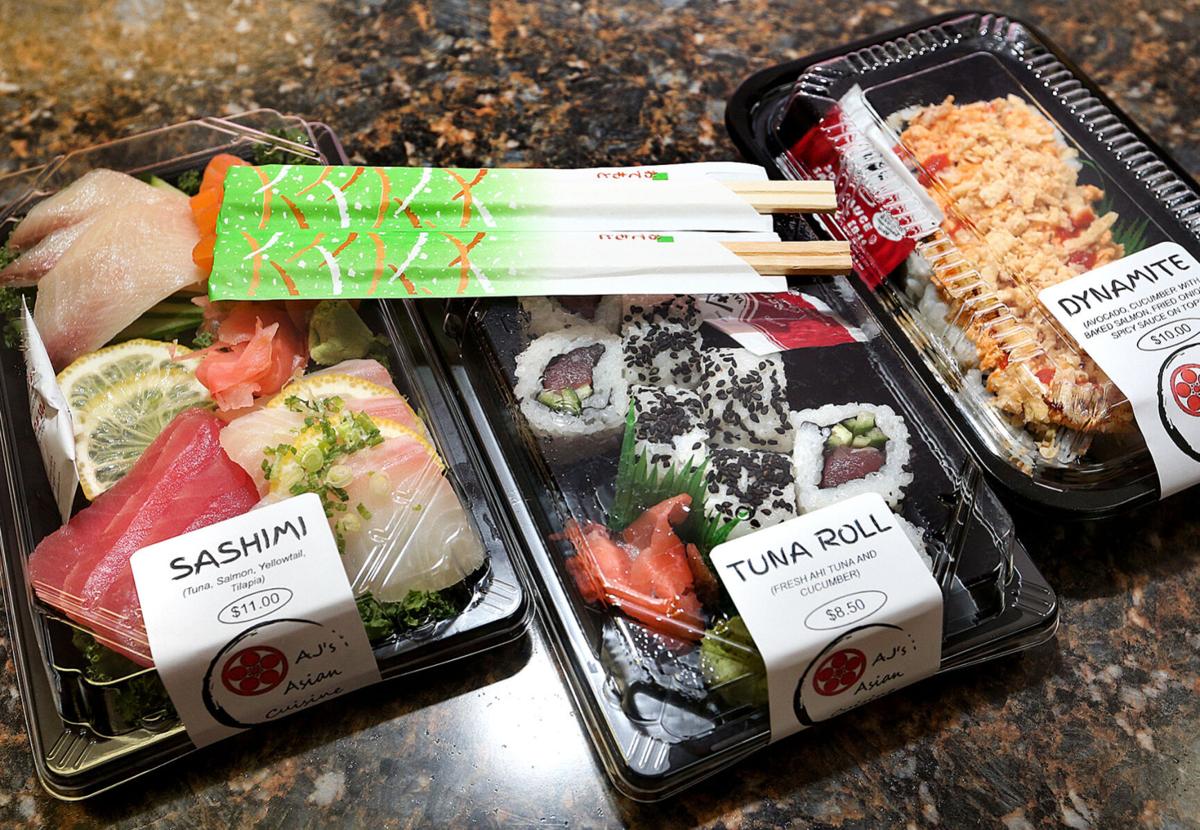 Sushi, Japanese lunches, sauces and snacks are packaged and ready to go in a refrigerated deli case at J-Mart Japanese/Asian Grocery Store and Asian Japanese Sushi Café in Sparta.

SPARTA — J-Mart Japanese/Asian Grocery and its owner, Brian Jewell, have expanded its merchandise selection and settled into its new, much larger location at 229 N. Black River St. in Jones Plaza in Sparta.

And Jewell’s brother, A.J. Jewell, has opened his Asian Japanese Sushi Cafe in part of the grocery store.

The cafe, which opened two months ago, can seat about 16 people and serves Japanese and other Asian food to customers who dine in or get it to go. The cafe also prepares food items in its new kitchen inside the grocery store, that are then packaged and available in refrigerated cases.

A.J. Jewell is a trained chef and makes sushi, Japanese lunches, sauces and snacks. Before opening the cafe inside the grocery store, he was making food items for the store at a commercial kitchen elsewhere in Sparta.

The grocery store opened Aug. 21 in its new location. It moved there from a smaller space in Jones Plaza, where the business began in August 2020. With the move, Jewell’s store carries a much larger selection of products.

They and their parents, Raymond and Chizuko Jewell, live in Sparta. Raymond had been stationed at a U.S. Navy base in Japan, where he met Chizuko, who is Japanese.

Brian Jewell said he held a variety of information technology jobs for more than 30 years in Florida, Oregon and Wisconsin, before starting the Sparta grocery store. His brother, A.J., had been a chef since 1988, mostly in Florida.

While the grocery store is open seven days a week, the cafe is open Monday through Saturday.

“Right now I’m doing 10 a.m. to 6 p.m. Monday through Saturday,” A.J. Jewell said of his cafe. “On Sunday, I have foods in the deli cooler for grab-and-go, although I’m not here then. People also can call in orders.”

“The most popular things (at the cafe) have been Asian comfort foods,” A.J. Jewell said. “that are hot or cold and ready to be reheated” at home.

“Most of what I make is Japanese,” such as curry stews, yakisoba noodles and fried rice, A.J. Jewell said, although he also prepares other Asian foods.

Brian Jewell said the grocery store sells Japanese, Korean and other Asian foods and gift items. About three-fourths of the products are Japanese, he said.

Jewell said he started the grocery store “Mostly because of a lack of selection (of Japanese food items) in the area. We would have to drive at least a couple hours away to find any of these kinds of ingredients and snacks and things,” he said.

“And sometimes we would have to go as far as Chicago,” Jewell said. “So once the opportunity came up (to start the Sparta store), I talked with a number of friends in La Crosse, Tomah and various other areas, and they said they would definitely be interested in something like this.”

The food can be picked up as ready-made, prepackaged or as ingredients for cooking at home.

Jewell said he has been able to increase his merchandise selection at his new, larger location despite worldwide shipping issues that the COVID-19 pandemic brought. “I’ve noticed that Korean and Chinese ingredients are fairly tough to come by right now,” he said. “But before that, I was getting more and more of that stock in.”

WHAT: A grocery store that mostly sells Japanese food items, but also sells items from other Asian countries.

WHO: The business is owned by Brian Jewell, who as a youth lived in Japan for about 10 years.

ASIAN JAPANESE SUSHI CAFE: Is a cafe that Brian’s brother, A.J. Jewell, opened about two months ago inside the grocery store. Its hours are 10 a.m. to 6 p.m. Monday through Saturday. The cafe also prepares and packages foods that are available in a refrigerated case seven days a week. For more information or to place an order, call the cafe at 608-487-9496. The cafe also is on Facebook.

After 46 years in its original location, Pizza King has moved to the former Clason Buick GMC showroom at 2915 East Ave. S.

BANGOR — Natasha Everson enjoys hearing people talk about their lives, in her part-time job as a bartender at the Robins Nest bar on French Is…

Burreson's Foods has been purchased by the owners of Piggly Wiggly stores in Waunakee and Lodi.

5 steps to strengthen your finances in 2022

In 2022, setting grand financial goals may not be realistic for every budget, but there are still smart steps you can take to shore up your finances.

Microsoft is buying the gaming company Activision Blizzard for $68.7 billion, gaining access to blockbuster games like "Call of Duty" and "Candy Crush."

Steve Cahalan: Hy-Vee likely to open in latter part of 2022

It will be several months before a Hy-Vee supermarket opens in the former Sears department store building at 4200 State Hwy. 16, at Valley View Mall.

SHINE Technologies has signed one of the "first-ever" contracts through the Department of Energy to expand the safe and domestic production of a material used in over 40,000 diagnostic medical procedures each day.

Face your financial anxiety by reframing your relationship to money

How to cut the cost of preventative care

How to cut the cost of preventative care

These are the best tips and tricks for donating to charity

These are the best tips and tricks for donating to charity

How to make room for fun in your monthly budget

How to make room for fun in your monthly budget

Sushi, Japanese lunches, sauces and snacks are packaged and ready to go in a refrigerated deli case at J-Mart Japanese/Asian Grocery Store and Asian Japanese Sushi Café in Sparta.