The grilled cheese sandwiches are back along with the farm equipment, acres of vendors and of course the cows.

But when World Dairy Expo opens in full on Tuesday there will be few international visitors roaming the vast grounds of the Alliant Energy Center.

COVID-19 canceled the 2020 event. This year, international travel restrictions and company policies are preventing many from outside the U.S. from traveling to Madison.

Of the 60,000 people who attended the 2019 show prior to the pandemic, about 2,000 came from nearly 100 countries. But this year only a fraction of the regular international vendors and guests will be making the trip, according to Scott Bentley, general manager of the Expo since 2013.

Considered the world’s largest dairy-focused trade show, World Dairy Expo features 2,000 cows, 650 vendors and about 500,000 square feet of exhibitor space. About half of those who attend the show are from Wisconsin. The event also occupies two agricultural pavilions, Exhibition Hall, Dane County Coliseum, a temporary structure in the parking lot and the Dane County Arena.

Founded in 1967, the Expo is the largest convention in Dane County. The week-long event has a $25 million annual economic impact on the region and is a boon to hotels, bars, restaurants and retail shops, all of which have struggled since spring 2020. Officials announced in April that the Expo would return this year.

The Expo’s contract with Dane County runs through 2023. The county is also exploring a massive $300 million to $500 million redevelopment of the 164-acre site that could include restaurants, hotels, retail and housing. And while no decisions have been made on the future of the Expo at Alliant Energy Center, Bentley said the organization is “absolutely” committed to keeping the event at Alliant. He would not say when a final decision would be made.

“It’s the only place we’ve ever been,” Bentley said, while masked and seated in the media room on the second level of the New Holland Pavilion, which for months was used as a drive-thru COVID-19 testing and vaccination facility. “Our focus is Expo 2021, and we’ve been kind of clear with that from day one. We want to get through this event and have it be the best and most successful event possible.”

A few cattle judging and showmanship contests will be held Sunday and Monday, but the Expo kicks into high gear on Tuesday with the opening of the trade show and judging events in the Coliseum. Seminars and other educational events are held throughout the Expo and can include topics like cow comfort, manure management, mastitis management and nutrition. Cow shows, also held throughout the week, can include brown Swiss, Jersey, Shorthorn, Ayrshire and Guernsey.

On Thursday, Tyne Morgan, host of the “U.S. Farm Report,” will guide a one-hour session featuring a panel focused on markets, industry news and trends. Some of the session will be used for the “Farm Report” episode that airs Saturday and Sunday.

New this year is using the Arena for Tanbark, a social area that will be larger, with expanded hours and home to talks, networking and a concert on Friday by Nashville country music artist Dillon Carmichael. The Expo also features a “career connections” area to help introduce agricultural businesses to students and young professionals in search of positions in the dairy industry and a Tech Spotlight that allows visitors to get their first look at new products and services from 10 tech start-up companies.

Josh Hushon grew up on his parents’ dairy farm in south-central Pennsylvania. His first trip to World Dairy Expo when he was 16 was life-changing and provided the prompt for him to seek a career in agriculture off the farm. He now works in marketing for animal nutrition for Cargill and, along with his wife, Casey, has a small hobby farm near the Waukesha County community of North Prairie. They each brought a single Ayrshire and brown Swiss cow to show at this year’s expo.

“Showing gave me a lot of self confidence as a kid,” said Hushon, 40, who is at his 25th straight Expo. “From a professional standpoint, it’s an important opportunity for our company. I’ve made a lot of connections over the years that have been fruitful and I just like the people so much. I just like cows and the people that like cows, and there’s no better place than World Dairy Expo for both.”

Brenda Murphy and her brother, Brian Behnke, grew up on a dairy farm in the town of Brooklyn. Murphy is now director of farmer communications and programs with Dairy Farmers of Wisconsin, formerly known as the Wisconsin Milk Marketing Board, charged with increasing the consumption and sale of Wisconsin milk. Murphy has a booth in Exhibition Hall this week and helped procure artisan cheeses from around the state to be sold at the grilled cheese stand.

“Without World Dairy Expo last year there was a big hole,” Murphy, 46, said. “Not only is it important to the Madison community, because the businesses around this need the revenue, but for us as people, there’s so many friendships built here.”

Behnke works for ABS Global USA in DeForest. For Behnke, 54, who has attended every Expo since its inception (he was 11 months old in 1967), his booth is in the Coliseum and he will be master of ceremonies on Saturday when the best cow in North America is crowned. Behnke will also be handing out copies of Holstein International, published in The Netherlands, because those with the magazine are unable to travel to the U.S.

“It’s friends from all over the U.S. and around the world that you meet here,” Behnke said. “This is our meeting place, but it’s pretty much just North America this year.”

When: Tuesday through Saturday (with limited additional events on Sunday and Monday) beginning each day as early as 7 a.m. The trade show is open daily from 9 a.m. to 5 p.m. 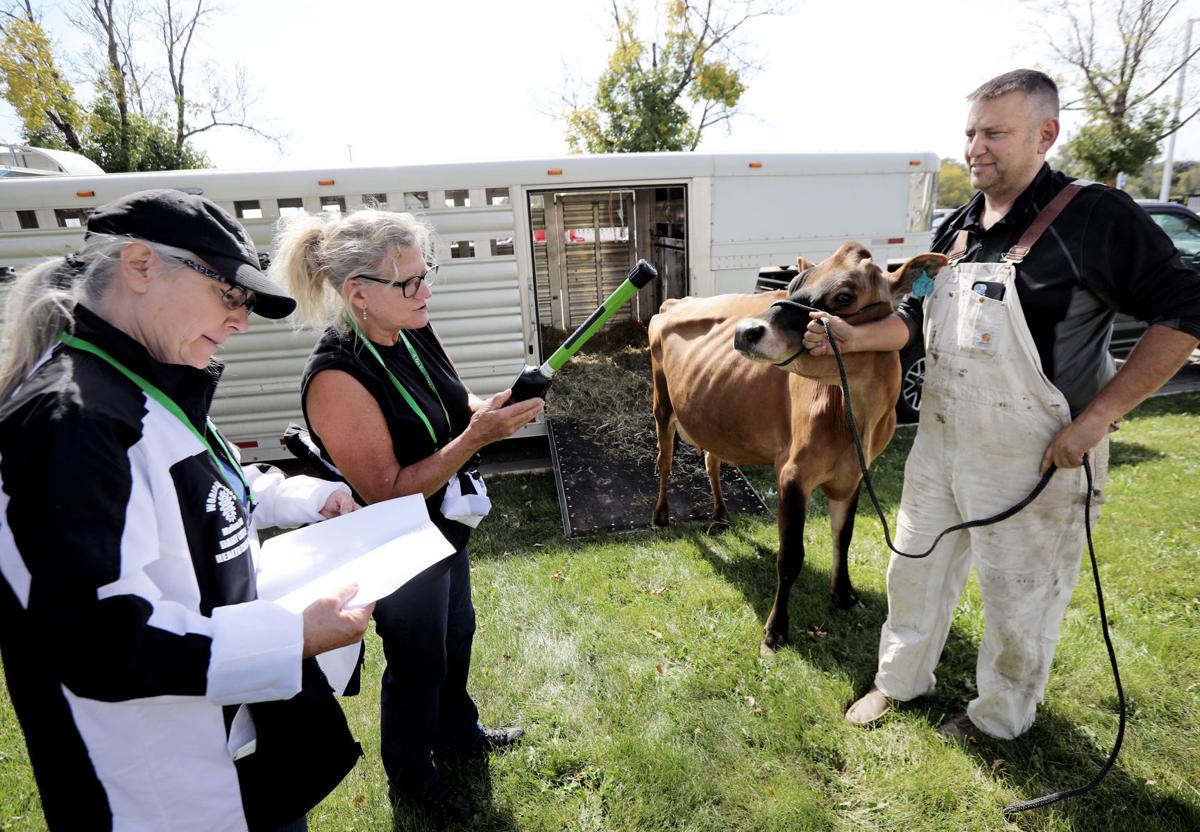 The cows have returned to World Dairy Expo after the week-long event was canceled in 2020 due to COVID-19. The Expo begins in full on Tuesday, but on Friday animals began to arrive at the Alliant Energy Center. From left, Dr. Shelby Molina and Dr. Ellen Hooker, both with the state Department of Trade and Consumer Protection's Animal Health, check in a Jersey cow for Allen Berry of Sherwood, Ore. 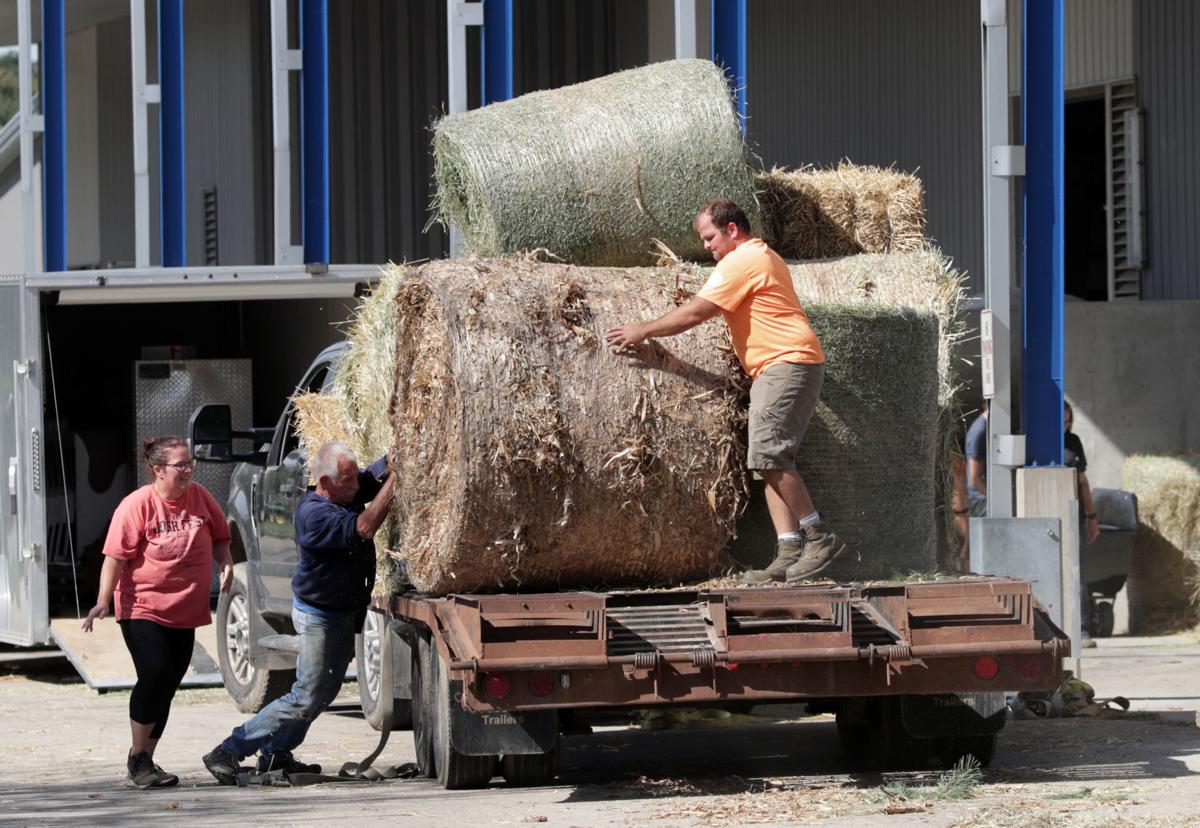 Mike Maier, right, of Lazy M Farm in Stitzer, with his sister, Laura, at left, and Mike Fiedler, work together to unload hay from a trailer during setup Friday for World Dairy Expo. 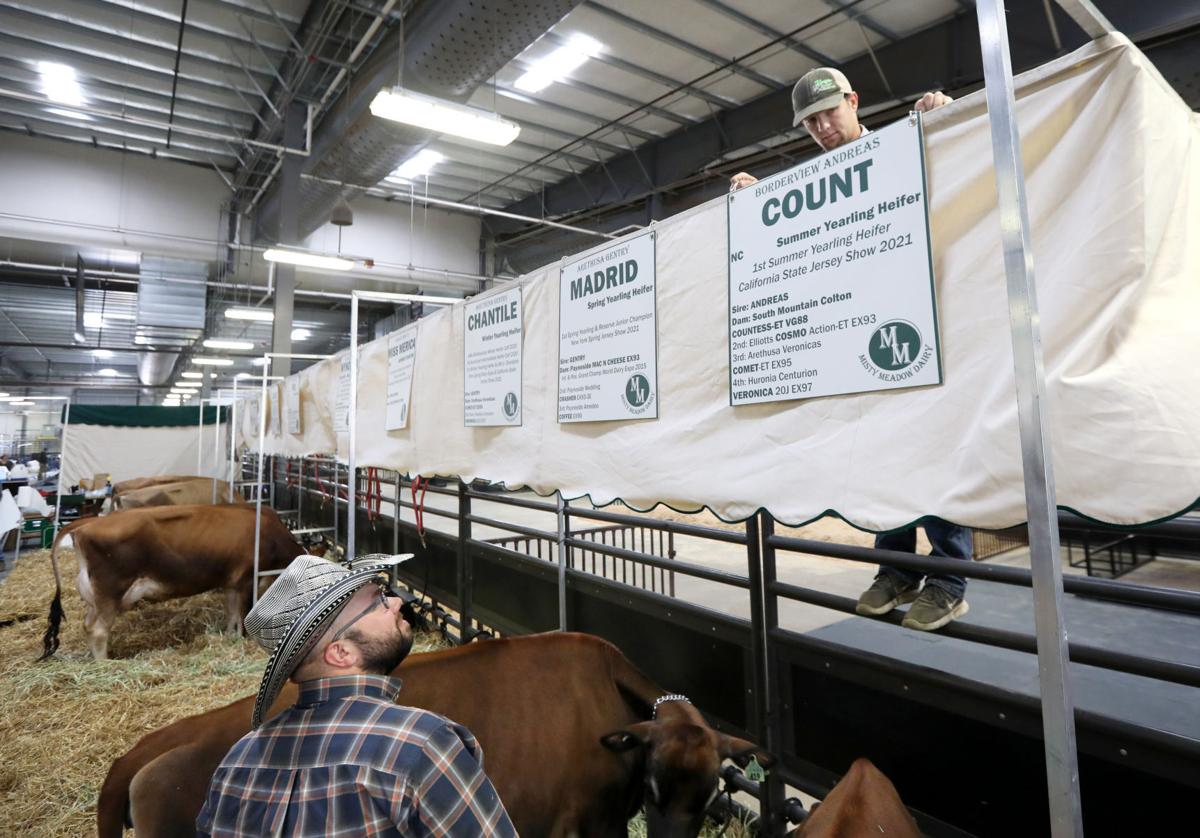 Dalton Anderson, of Seward, Neb., with the help of Joe Odden, at left, of Sioux Falls, S.D., hangs signs for the Jersey cows from Misty Meadow Dairy in Tillamook, Ore. 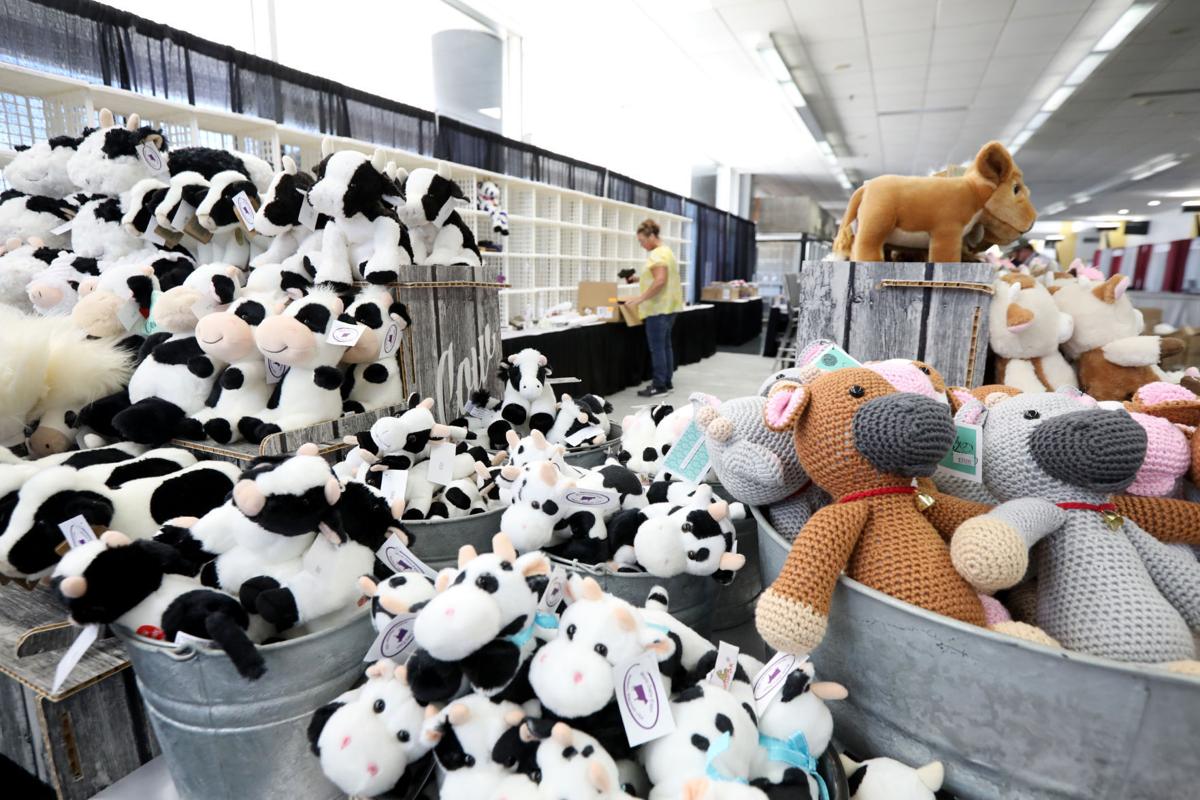 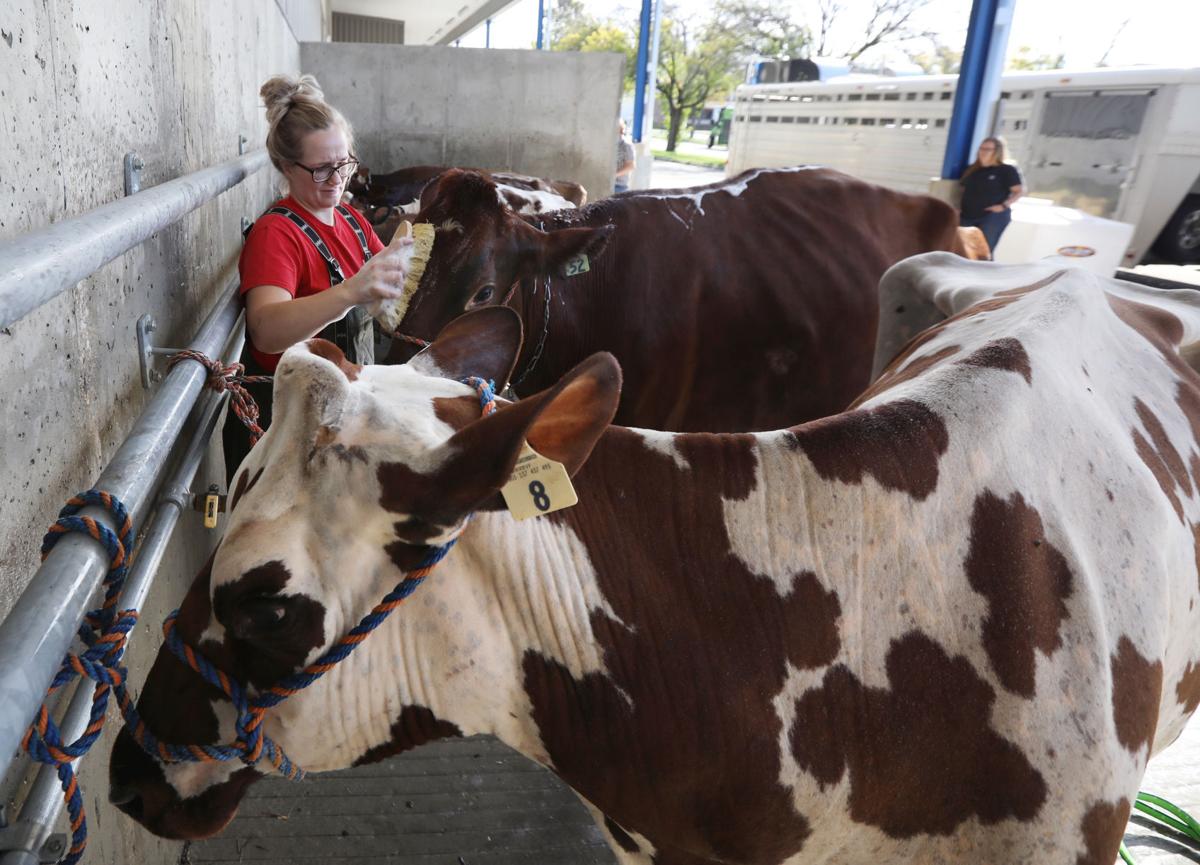 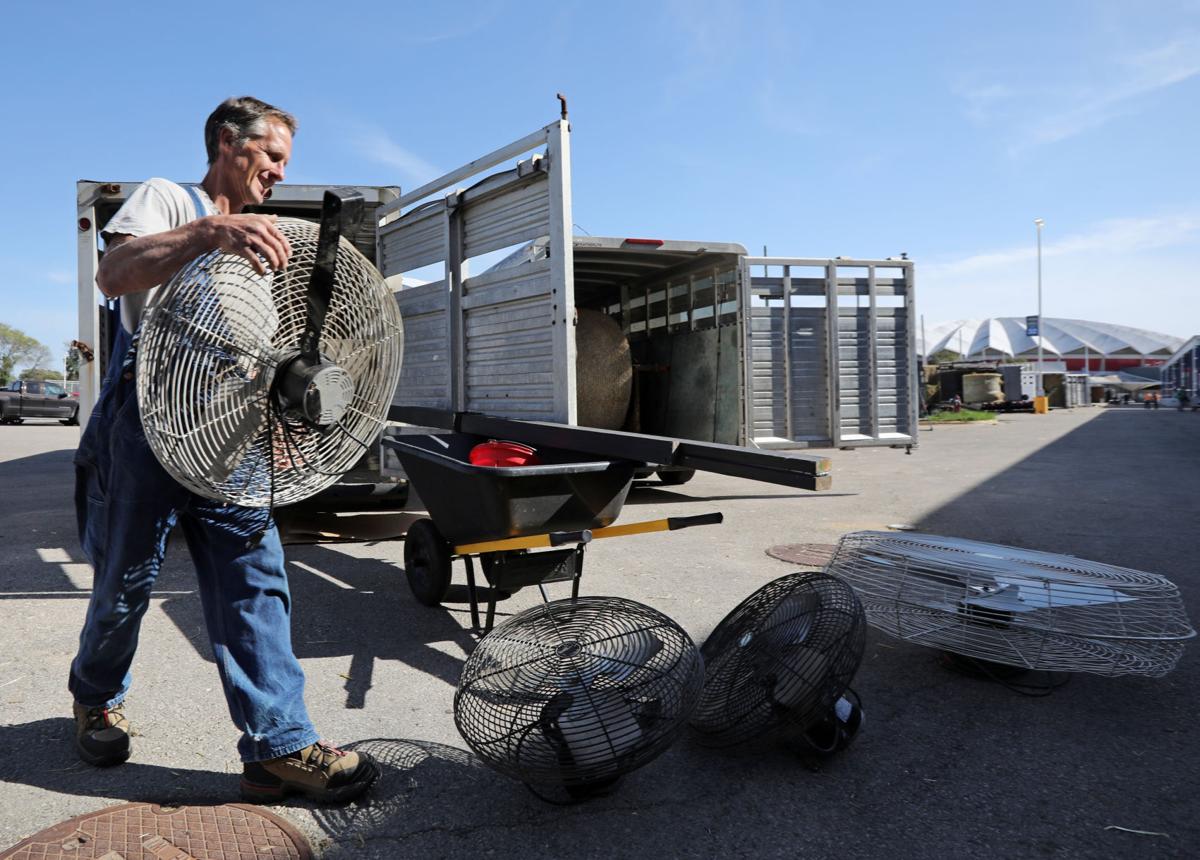 Jon Schmidt, of Bloomer, unloads fans for cattle ahead of this year's Expo. Warm temperatures are expected in the days ahead. 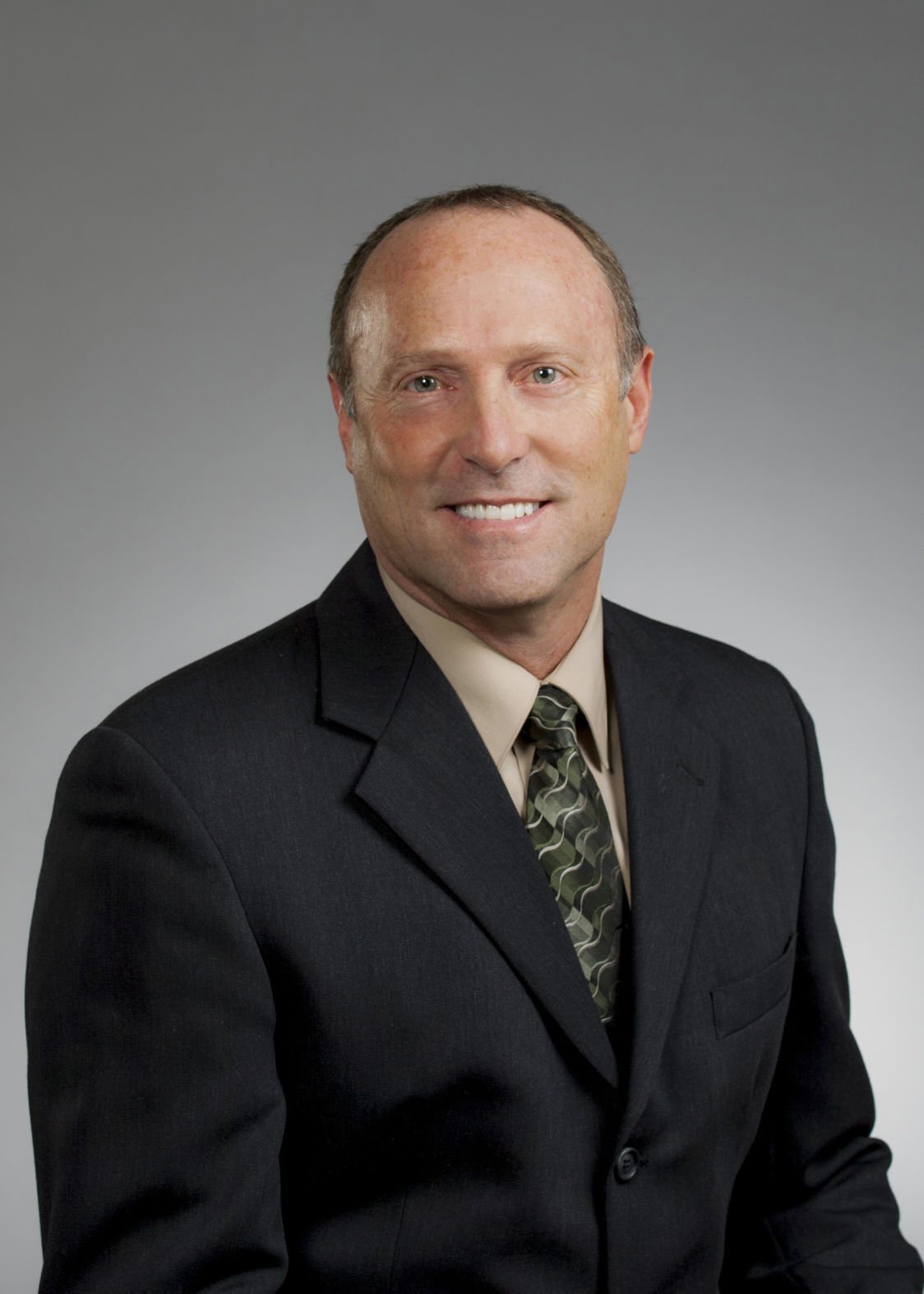