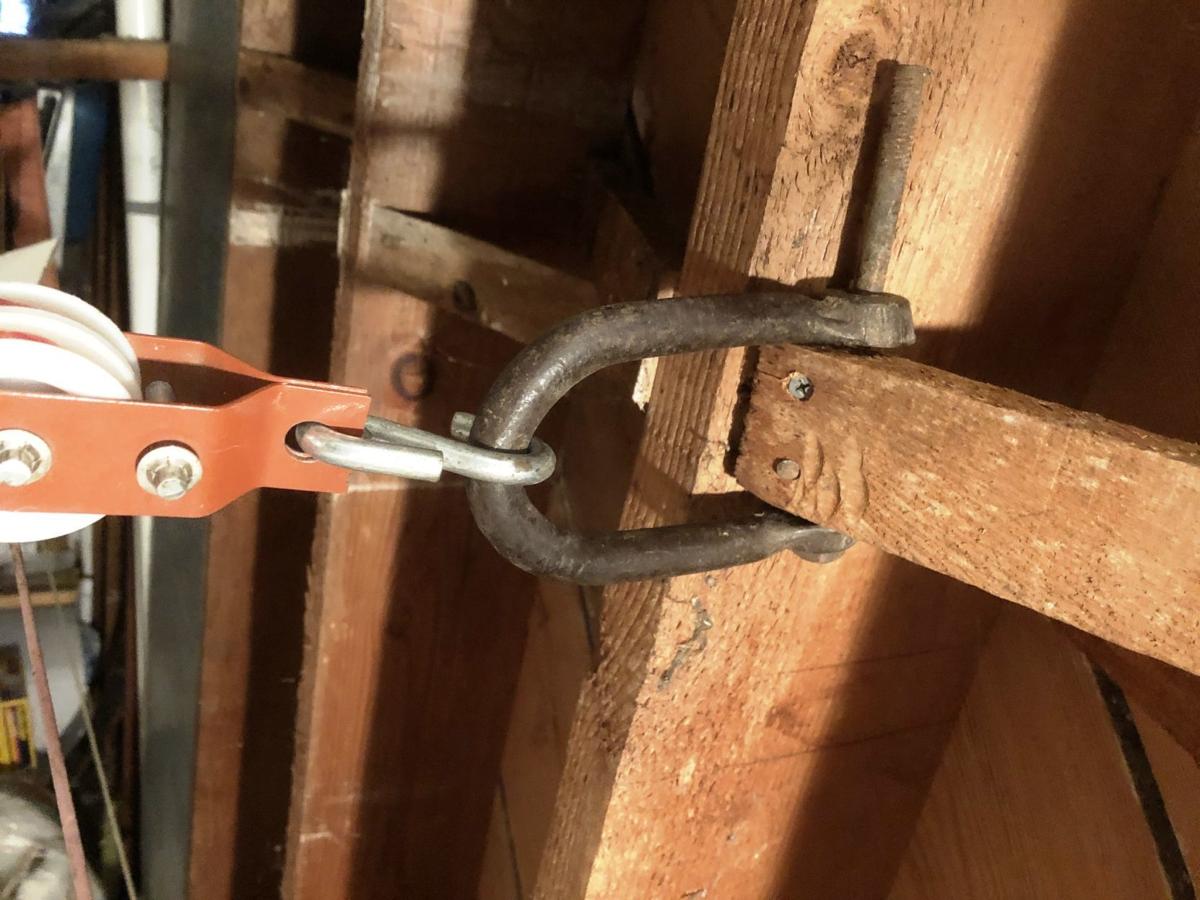 This hook used to be used for hanging Hereford beef quarters in the basement of Chris Hardie's house. It was used recently to hang a deer.

These two knives were used back in the 1950s and 1960s to butcher cattle. They are now used to process deer. 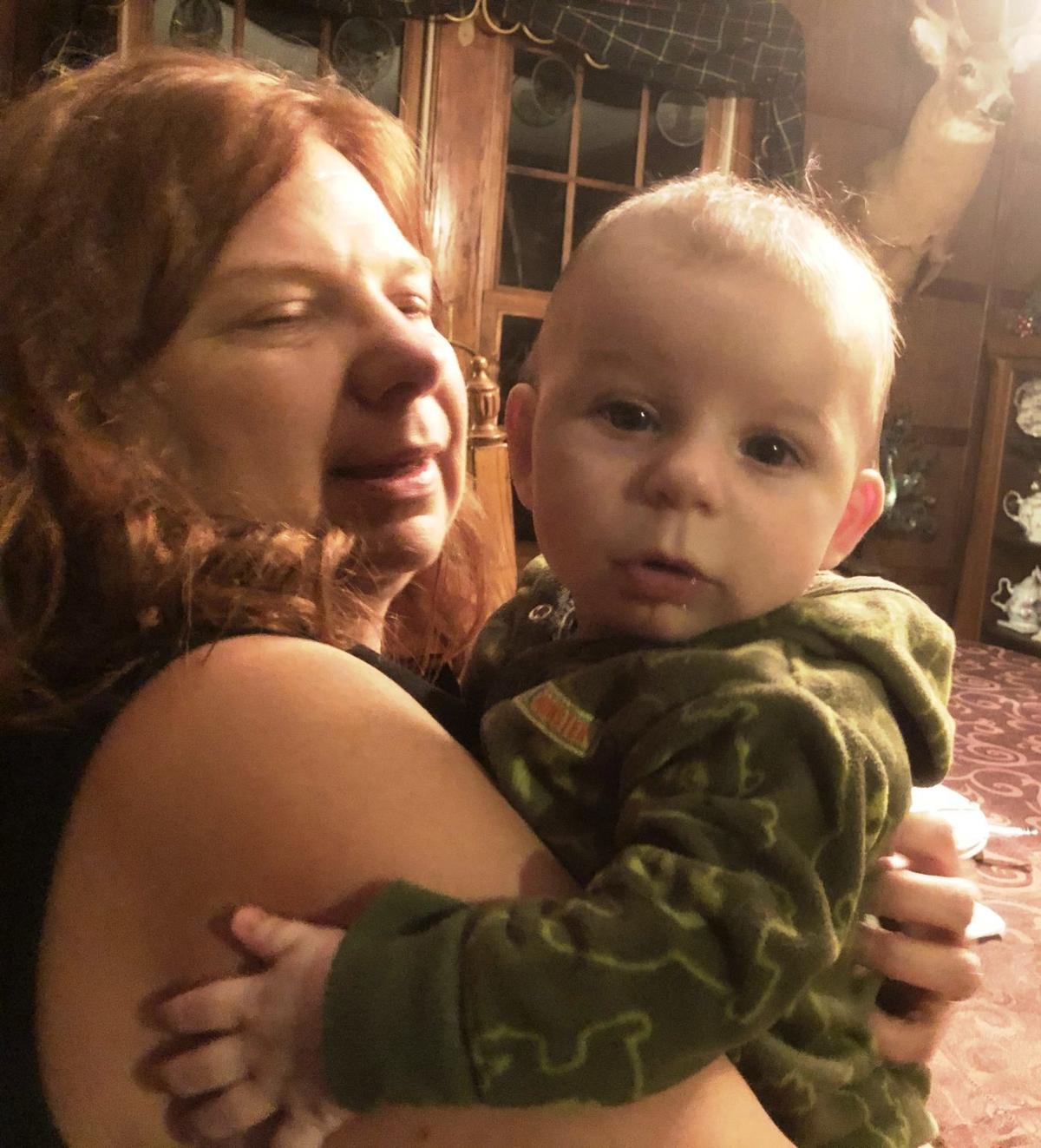 Sam always has a smile for his Grandma Sherry, but he sobers up when he looks at Grandpa Chris. 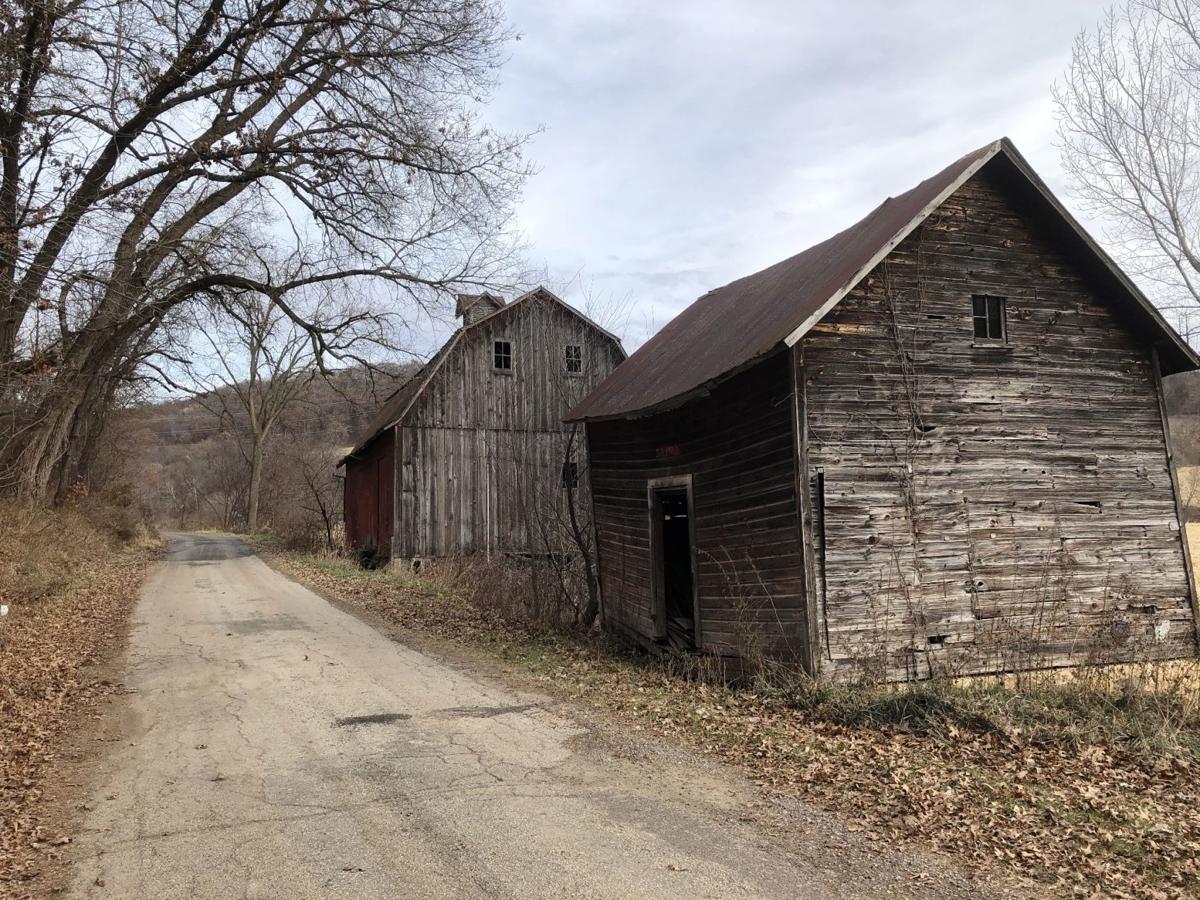 Two weather-worn buildings along a country road near Galesville, Wisconsin.

The original part of our farmhouse was built by my great-grandparents and is full of memories.

One of my earliest memories dates to the middle 1960s when we were visiting on butchering day. My uncle Leland Clair had a herd of Herefords, so there were always delicious beef dinners.

A cow or steer would be skinned and eviscerated outside and cut into quarters. The quarters would be taken into the basement, where they were hung from the ceiling and cut into steaks and roasts.

I remember a big wooden table where the cutting was done. I still have two of the knives with oak handles that were used. The old pieces of linoleum that covered the concrete floor are still there.

I was only 3 or 4 years old at the time, but that memory came back to me last week when my son Ross and I butchered a deer in the basement.

Ross and his wife, Lucy, went deer hunting Thanksgiving morning, giving my wife, Sherry, and me the pleasure of watching our 4-month-old grandson Samuel for a few hours.

I stayed with Samuel for about an hour or so and read a book while he was still sleeping. The kids told me he usually sleeps with white noise, so I thought I could just turn on any cable news channel. I was told that would give my grandson nightmares and they have an actual white noise machine that does not include talking heads.

Samuel is at that magical age when he can go from charming you with a smile to ear-piercing wails in the flip of a switch. From observation, I believe the former is triggered when he’s gazing at his lovely grandma and the latter when he looks at me.

Two diaper changes, two bottles and a short nap later (for him and his grandpa) the kids came back with a large doe that Ross shot. Our goal was to get it processed and in the freezer by late afternoon so they could spend the evening with Lucy’s family.

The basement was the place to do it. We have a small kitchen with an island counter perfect for cutting. The iron hooks used to hang the beef quarters are still in the ceiling joists. I moved one to a more convenient spot. There was only one nail holding the joist, but I grabbed the hook and did a pull-up to test its strength.

“That will hold unless you have the world’s largest doe,” I told Ross.

It didn’t, and he didn’t. We were hoisting up the deer when the nail pulled loose and everything came tumbling down.

I went to grab a hammer and another nail. I started to rummage through my toolbox looking for a nail or a big screw. However, my left index finger located a utility knife blade, and we had blood even before the butchering began.

I held my finger under running cold water, wrapped it tight with some paper towels, found a couple of bandages and a plastic glove and we were back in business.

I went back to the unorganized box of danger otherwise known as my toolbox and carefully located a big screw that we used to shore up the joist.

We were also delayed by a few minutes when I tried to stream a football game to the TV in the kitchen. My slow connection forced us to give up. The internet was slow, too.

The joist held. The skinning, cutting and wrapping went without further incident. It went so well, it was only a one-beer deer.

We had the meat in the freezer, the kitchen cleaned up and the kids were on the road in time.

Despite the setbacks, it was a great day.

I have much to be thankful for indeed.

The ultimate harbinger of spring appeared last week and I was not happy.

Spring is slowly coming to our farm, with the days growing longer and the sun growing stronger.

This hook used to be used for hanging Hereford beef quarters in the basement of Chris Hardie's house. It was used recently to hang a deer.

These two knives were used back in the 1950s and 1960s to butcher cattle. They are now used to process deer.

Sam always has a smile for his Grandma Sherry, but he sobers up when he looks at Grandpa Chris.

Two weather-worn buildings along a country road near Galesville, Wisconsin.