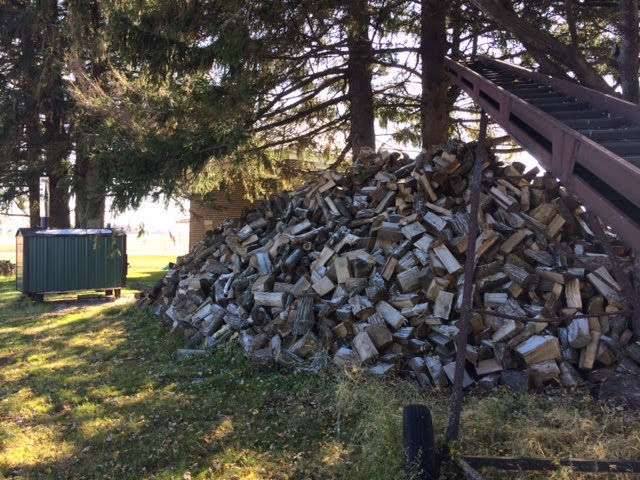 This is how you stack a big woodpile -- use an elevator like Michael Clements of Middle Ridge does. 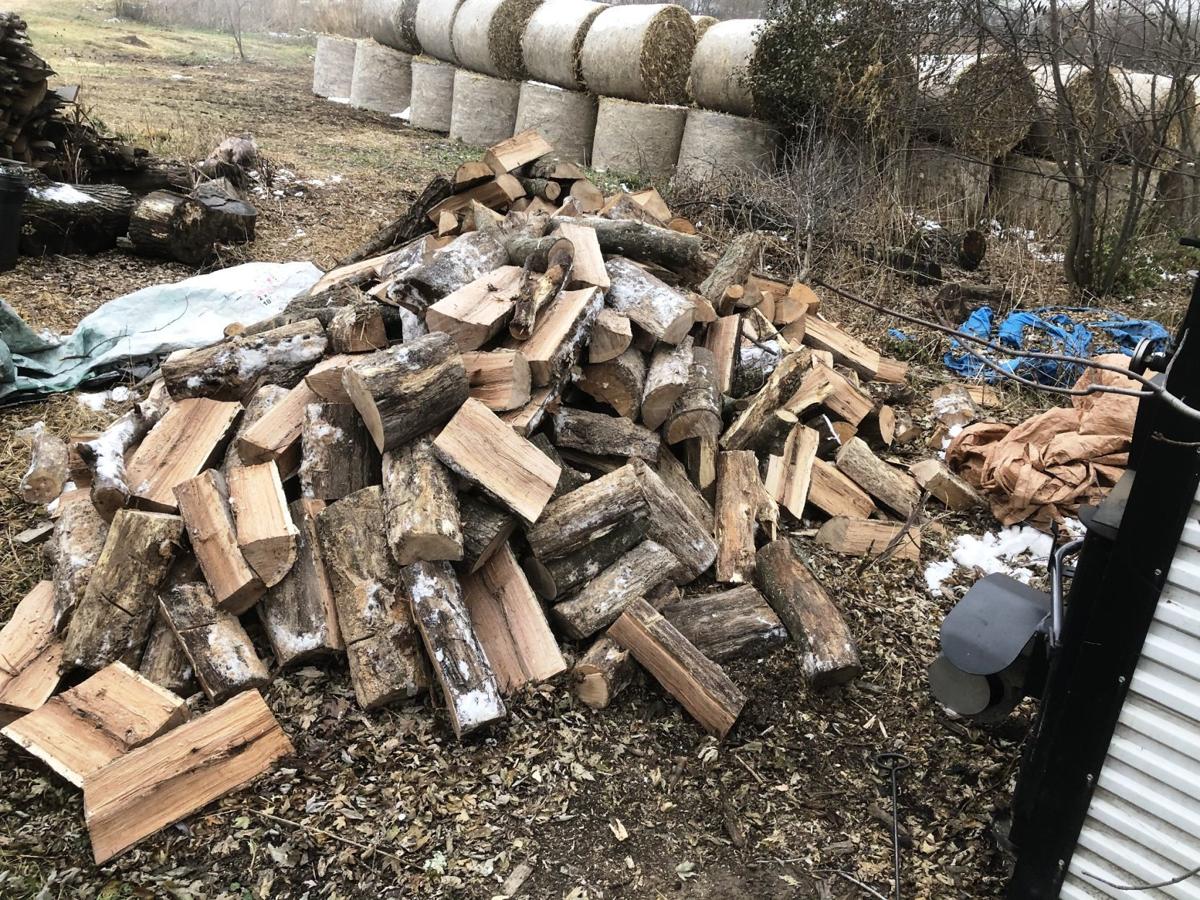 Chris Hardie's woodpile -- while slowly growing -- is much smaller. 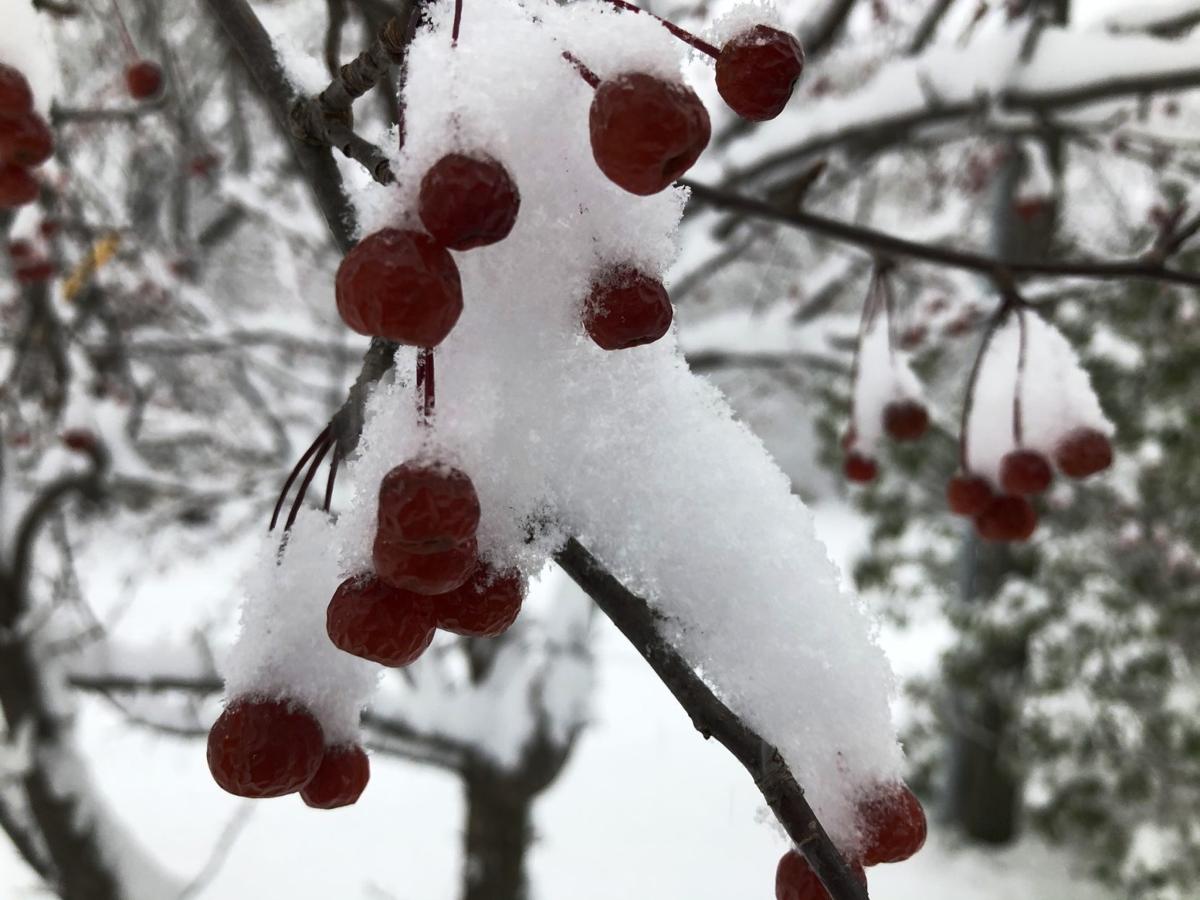 Some wrinkled crab apples are covered with an early snowfall.

I think it’s time to call in a professional negotiator to settle a serious dispute between Mother Nature and Old Man Winter.

By my calendar this is supposed to still be fall — light jackets, sweaters and crisp mornings.

Apparently Mother Nature needs a better calendar manager, or she has taken a serious bribe from Old Man Winter. Because early November skipped forward a month or two and we went straight to winter coats, gloves and sub-zero mornings.

Yes, I mean sub-zero. I am not exaggerating. On Nov. 8, the area where I live in Jackson County dipped to minus-8 degrees as recorded at the Black River Falls Airport. Rome, Wisconsin, also measured minus-8, giving those two locations the notorious distinction of the lowest temperature that day in the entire lower 48 states.

The average low temperature in La Crosse for Nov. 8 is 32 degrees. The temperature dipped to 9 in La Crosse that day, coming close to the record low of 5. Even that would have been warm welcome from minus-8. The previous morning on our farm I recorded minus-1, which gave us back-to-back days of below zero.

As of this writing, the extended forecast calls for below freezing temperatures for highs until the end of the week. Overnight will be a couple of flirtations with zero again.

All of this early and extended appearance by winter is putting even more pressure to build the woodpile for what’s shaping up to be a very long and extended heating season.

A few weeks ago, I featured a photo of my first wood pile stack of the season. It was a feeble attempt duly noted by Michael Clements, who lives near Middle Ridge between La Crosse and Cashton.

Clements brazenly flaunted the size of his woodpile by emailing me a photo of “what a real wood pile for the winter looks like.”

Sure enough, there was a large mound of wood that immediately made me jealous.

Clearly, Clements was showing no regard to my problem with woodpile envy, a malady I wrote about last year. I’ll be driving down the road watching the scenery and bam! I am instantly overcome with jealousy and covetousness and almost a feeling of resentment.

I’m particularly attracted to very large woodpiles, no doubt because I’m ashamed at the size of my own. It seems that no matter what I do, my cordwood simply doesn’t cut it.

I know that wood piles that as big as Clements’ don’t simply materialize overnight. Michael and his wife, Ann Marie, have lived on the farm for 41 years, and it’s been in Ann Marie’s family for more than 140 years.

Clements heats an “old, cold farm house” and a 36-by-45-foot shop with an outdoor boiler. He marks dead or storm-damaged trees, cuts them and drags them to pile where they are cut and split with a tractor-driven wood processor and piled high with an elevator.

“So it is not really fair to compare my wood pile to yours,” Clements graciously replied.

My less than professional wood processing is accomplished with my old pickup truck, whichever chainsaw will start and an 8-pound splitting maul. All of this to feed an outdoor boiler that holds 1,000 gallons of water and has a firebox that is 4 feet long, 28 inches high and 32 inches wide.

The boiler heats two houses and the milkhouse in the old dairy barn. It’s a hungry beast that devours more than 40 full cords each winter. It’s a task that my dad and I used to share but now falls upon my broad but aging shoulders.

I shouldn’t complain. At 74, Clements has 19 years on me and says he still cuts most of the wood himself. “If I have bigger trees, I get some help from my sons,” he said, admitting that the big saws are getting harder to handle.

The benefit of all the work is a truly warm house.

“The only time we have really been warm in this house is since we put the outdoor stove in,” he said. “We set the thermostat at 68 degrees in the fall and leave it there all winter.”

One of the advantages of having a large firebox is that I usually cut and split the pieces only the size that is necessary for me to lift them. Sometimes I overestimate my strength and those end up smoldering away in the front of the firebox because that’s as far as I can toss them.

Clements has a better idea to help lighten the load … in more ways than one.

“Never split wood bigger than your wife can handle,” he said.

One of the great joys in writing a column is getting feedback from readers.

Chris Hardie: The confusion of calendars

This is how you stack a big woodpile -- use an elevator like Michael Clements of Middle Ridge does.

Chris Hardie's woodpile -- while slowly growing -- is much smaller.

Some wrinkled crab apples are covered with an early snowfall.