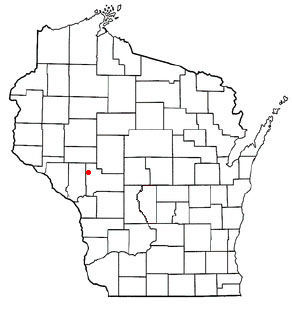 Northfield is located in northeastern Jackson County, about 34 miles southeast of Eau Claire. 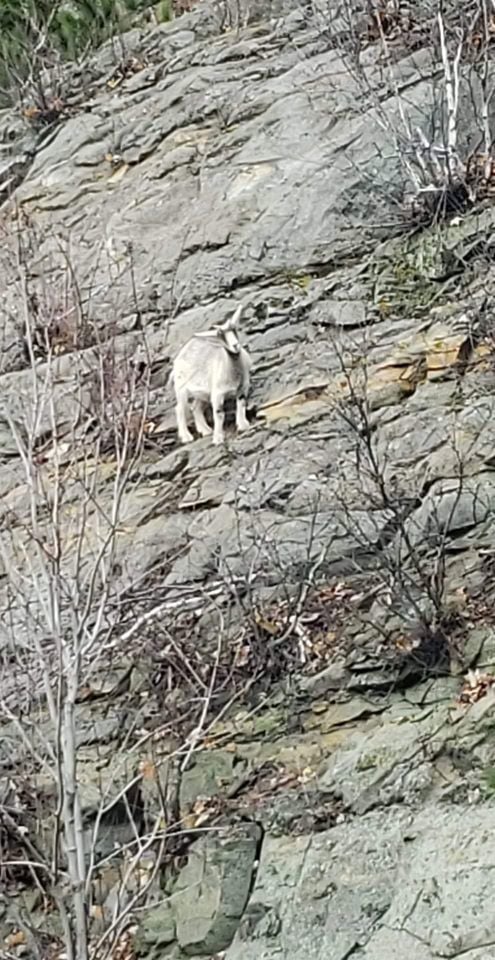 Jean Bengston posted this photo of Betsy on Facebook. 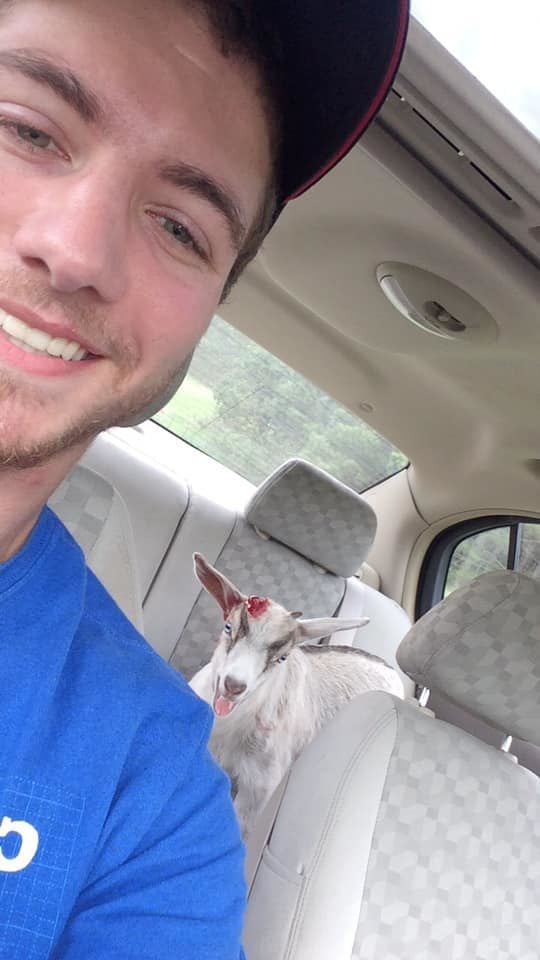 Roberto Bernabie-Grassi took this photo of Betsy as she was riding in the car after he purchased her. Her horn was bleeding at the time but has since grown back. 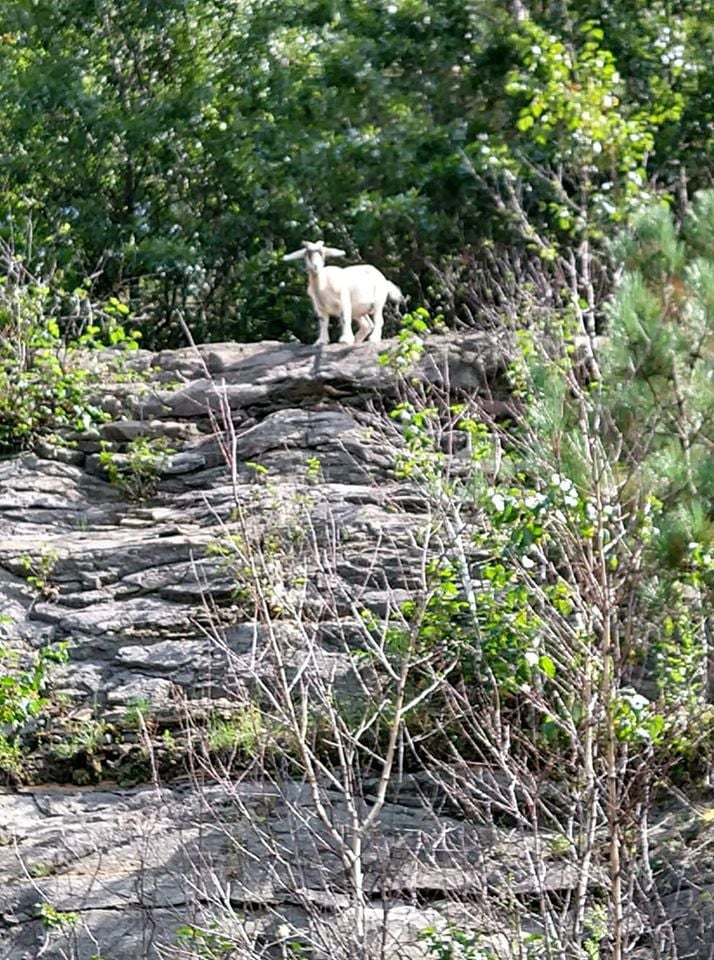 Karla Demaske posted this photo of Betsy on Facebook. 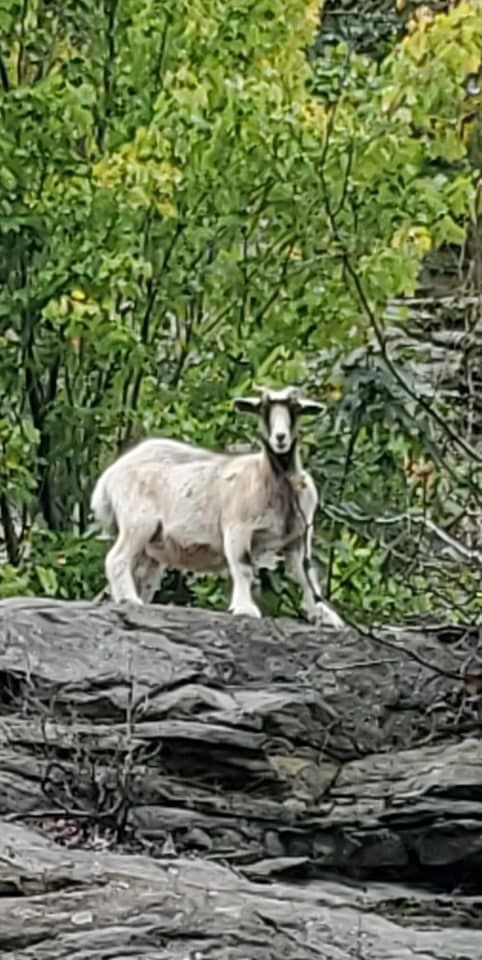 Rob Patrick posted this photo of Betsy on Facebook.

The unincorporated town of Northfield, Wis., is located in the northwest corner of Jackson County where Interstate 94 exits at Hwy. 121 between Osseo and Hixton, 34 miles southeast of Eau Claire.

The town celebrated its 150th anniversary in 2007 and today is perhaps best known as the location of Superior Fresh, the nation’s first indoor Atlantic salmon farm in the U.S.

The large facility sits on the hilltop above the town and its purple lights can sometimes be seen glowing from miles away.

One of Northfield’s notable residents is the late William F. Dettinger, who was born in the town in 1880 and served 12 years as a Progressive Republican in the state Assembly.

But today some would say the hamlet’s most famous resident is not a person but rather a goat — the Northfield Goat. Passersby on I-94 sometimes spot the goat along the cliffs near the 100-mile marker about two miles southeast of town.

Concerned citizens have called 9-1-1, but whenever anyone gets near the goat, it scrambles up the rocky ledge.

It is well-known to the Wisconsin State Patrol. A spokesman said the patrol has sent squad cars when calls are received, but said as long as the goat is not in traffic there is not much they can do.

Other motorists have taken photos or videos of the goat and have posted them on a Facebook page (@northfield goat) for the Northfield Goat of Jackson County, WI.

The goat does have a name — Betsy — and is owned by Roberto Bernabei-Grassi.

In 2018, Bernabei-Grassi had returned from the Marines to his family farm near Northfield. His old goat had died so he bought a new kid — just eight weeks old. He brought the goat home in his car and it escaped when he opened the door.

Bernabei-Grassi and his father caught Betsy, but it was a precursor of what was to come.

The farm already had three fainting goats and Betsy was to be the fourth, but she turned out to be a Nigerian Dwarf. Don’t let the name fool you — the goats are by no means miniature and they can jump and climb. It eventually escaped the goat pen by clearing a 6-foot fence.

“We tried to chase it, but it ended up getting out again,” Bernabie-Grassi said. And then it disappeared.

He thought Betsy was probably dead, but about a year later he was driving on I-94 when he saw Betsy again — atop a rock outcropping near the 100-mile maker not too far from the farm. He stopped and confirmed that it was her.

Bernabie-Grassi got phone calls from authorities, asking him if he owned the goat. Yes, he said. But catching Betsy is another matter and she has so far stayed out of the traffic, scrambling back up the cliff when approached.

Goats have incredible agility — they can even climb trees. That combined with intelligence equivalent to dogs and their ability to revert to the wild makes the cliff a perfect hangout for Betsy — who has managed to survive two winters so far.

“I thought about trying to get her again, but she’s happy out there,” Bernabie-Grassi said. “And everybody likes her, so I figure I’ll let her be.”

Meanwhile, Betsy’s fame continues to grow. Her Facebook page has more than 1,200 likes and 1,400 followers. Bernabie-Grassi said he’s received phone calls from as far away as South Carolina from fans traveling through the area.

Goats can live 15 years or more and clearly Betsy has eluded any predators so far. If she continues to elude traffic, she may be a roadway fixture for years to come.

The grass was heavy with dew and a foggy mist shrouded the creek bottoms as I arose early to begin the task of removing some unused fence.

Northfield is located in northeastern Jackson County, about 34 miles southeast of Eau Claire.

Jean Bengston posted this photo of Betsy on Facebook.

Roberto Bernabie-Grassi took this photo of Betsy as she was riding in the car after he purchased her. Her horn was bleeding at the time but has since grown back.

Karla Demaske posted this photo of Betsy on Facebook.

Rob Patrick posted this photo of Betsy on Facebook.