The La Crosse County Republican Party said that Facebook is interfering in the upcoming election and restricting free speech after a number of its ads and posts were removed for alleged repeated sharing of false information.

“These actions which restrict free speech strike at the heart of our democracy. Facebook is interfering in our elections and that cannot be tolerated,” the party said in a statement to media Tuesday.

Through screenshots provided by the local GOP group, several of the group’s Facebook ads and posts have been removed from its page, and the page has been put on a “page restriction,” showing its content to fewer people, because of “repeated sharing of false news.”

The group said that the Republican Facebook page for Wisconsin’s 3rd Congressional District has also been banned from advertising.

“The posts that Facebook has objected to as false are certainly arguable,” the party said in its email.

The story, published by the Federalist, a right-leaning media outlet, says that a September report from the Centers for Disease Control “shows that masks and face coverings are not effective in preventing the spread of COVID-19, even for those people who consistently wear them.”

In the screenshot provided by the group, Facebook labeled the story as misinformation, as have other fact-checking groups, and provided articles that say that masks do not increase the risk of contracting the virus.

"The CDC post doesn't say what fact checkers say it does," the party said in an email, pushing back against the action.

In another post, per the screenshots, Facebook removed a post from the party sharing a YouTube video suggesting that former Vice President Joe Biden wore a wire during his earlier debate with President Donald Trump, which has been debunked.

“Whether or not Joe Biden was wired in his debate with Trump seems insignificant and does not warrant shutting down our political speech,” the party said in its email.

Facebook also censored a widely shared screengrab the group shared of a video Trump shared while battling COVID-19 at Walter Reed Medical Center, with a caption reading: “The doctors said they’ve never seen a body kill the Coronavirus like my body. They tested my DNA and it wasn’t DNA. It was USA.”

Fact checkers have been labeling the image as misinformation, saying it intends to falsely attribute the caption as a direct quote from Trump, though he never made those remarks.

Two other posts for the Wisconsin 94th Assembly race were also removed by Facebook, according to the party — one of La Crosse County Sheriff Jeff Wolf’s endorsement of Republican candidate Kevin Hoyer of West Salem, and another of a photo of an incident the party has drawn-on often, accusing Rep. Steve Doyle, D-Onalaska of refusing to stand and applaud members of the National Guard.

“I expect the 94th Assembly race to be decided by a few hundred votes. This is a district that President Trump won with 52% of the vote in 2016 that is held by Democrat Steve Doyle. They are interfering with our election. Pulling these ads may cost Hoyer the election,” the email from the party said, which was signed by party chair Bill Feehan.

The party said in its email that one of the posts included was made humorously, but it was not clear which one.

The local party’s outcry over social media’s crackdown on misinformation isn’t alone, and Republicans nationally are calling it election interference and censorship.

In recent weeks and months leading up to election day, social media platforms have been going to work removing and labeling posts that depict misinformation or falsities, and removing dangerous conspiracy theories.

Facebook also announced it would halt all political ads after polls closed on Nov. 3 and would display a note at the top of its platforms indicating that election winners were not confirmed until news outlets confirmed them, on top of limiting any new political ads the week before the election.

“I expect the 94th Assembly race to be decided by a few hundred votes. This is a district that President Trump won with 52% of the vote in 2016 that is held by Democrat Steve Doyle. They are interfering with our election. Pulling these ads may cost Hoyer the election.” Bill Feehan, La Crosse County GOP party chairman

"I expect the 94th Assembly race to be decided by a few hundred votes. This is a district that President Trump won with 52% of the vote in 2016 that is held by Democrat Steve Doyle. They are interfering with our election. Pulling these ads may cost Hoyer the election."

Watch Now: On Wisconsin's worst day of the pandemic, thousands pack in at West Salem race track for Trump Rally

WEST SALEM — Thousands filled the stands of a race track in West Salem on Tuesday for a campaign rally for President Donald Trump, the same da…

Building on its ongoing sustainability and social responsibility efforts, Pilgrim’s announced plans to invest $230,000 in Arcadia, Wis., to su…

In a screenshot provided by the La Crosse County Republican Party, it shows its page has been barred from advertising for "repeatedly posted content that has been debunked by third party fact-checkers." The party said that these actions by Facebook are election interference. 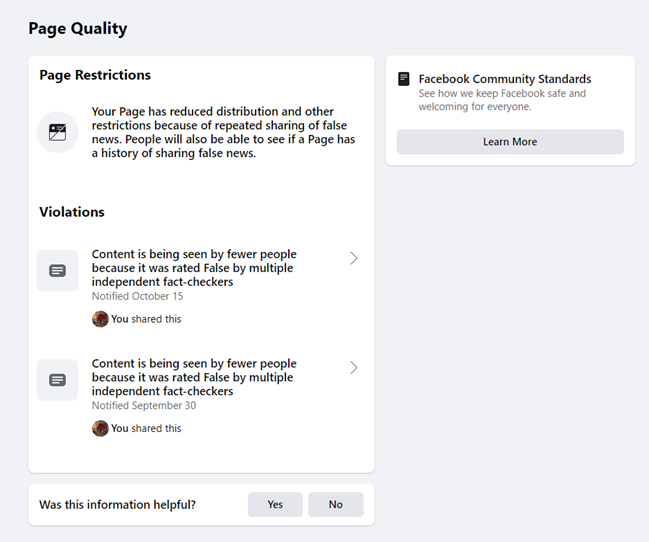 The La Crosse County Republican Party's Facebook page has recently been restricted so that its content is distributed to fewer people because of "repeated sharing of false news." 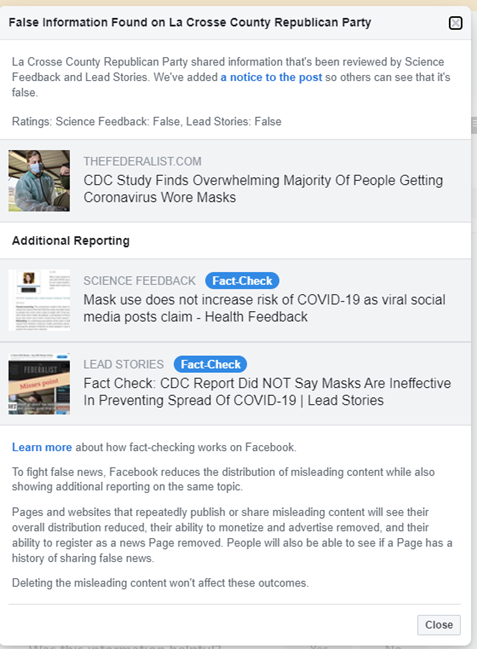 The party shared a story about a CDC report indicating that those who have tested positive for COVID-19 have largely been mask-wearers. Facebook removed the post for misinformation, responding with stories that say masks do not increase the risk of the virus. 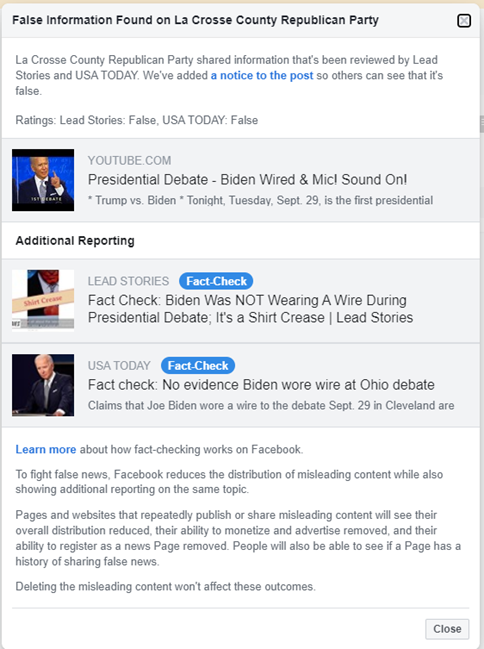 Facebook removed a video the group shared that suggested that Joe Biden wore a wire during a recent debate, which has been debunked. 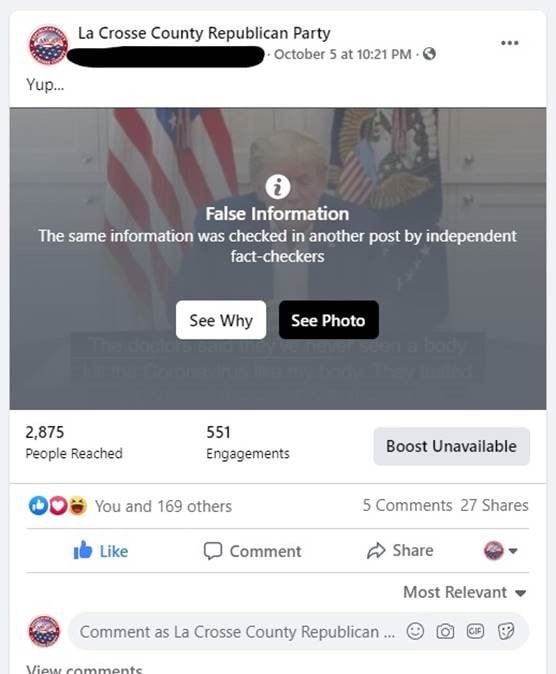 This screenshot shows that Facebook censored a post from the party of a widely-shared image misquoting Trump as saying "The doctors said they've never seen a body kill the Coronavirus like my body. They tested my DNA and it wasn't DNA. It was USA. 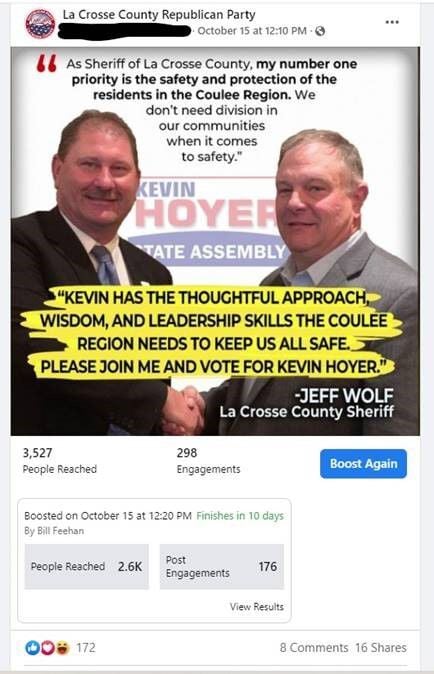 This ad, showing the La Crosse County sheriff endorsing a Republican candidate, was removed from the group's Facebook page, the group said. 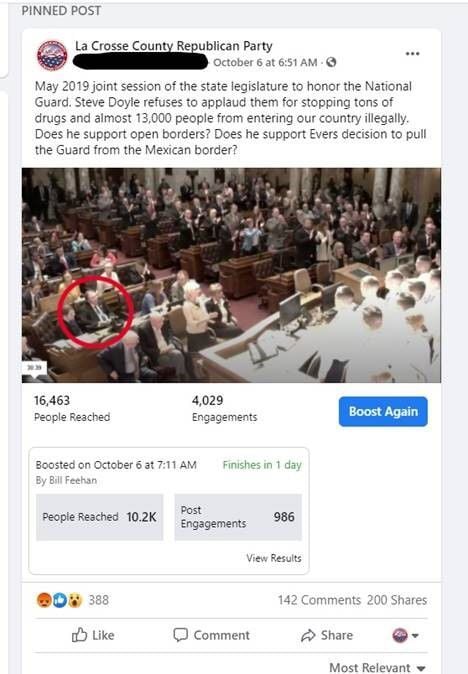 The party shared an image from a legislative session, with a circle around Rep. Steve Doyle, D-Onalaska, of standing and refusing to applaud members of the National Guard. The incident has been fought back and forth between party members for the past year, but this most recent post was removed by Facebook, the group said. 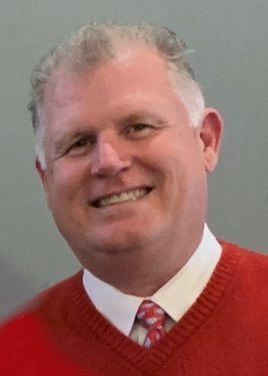