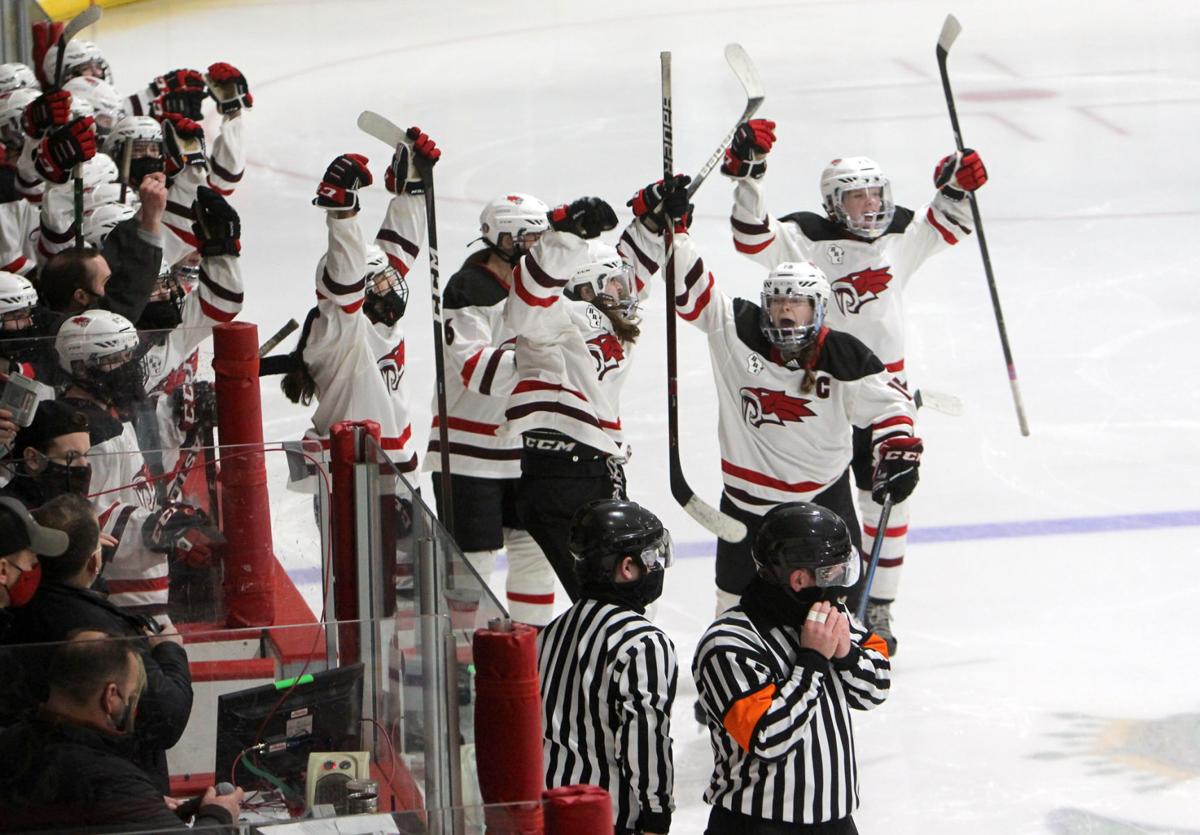 Chippewa Falls/Menomonie celebrates after Ella Ausman's goal early in the third period is allowed on Saturday in Wisconsin Rapids. 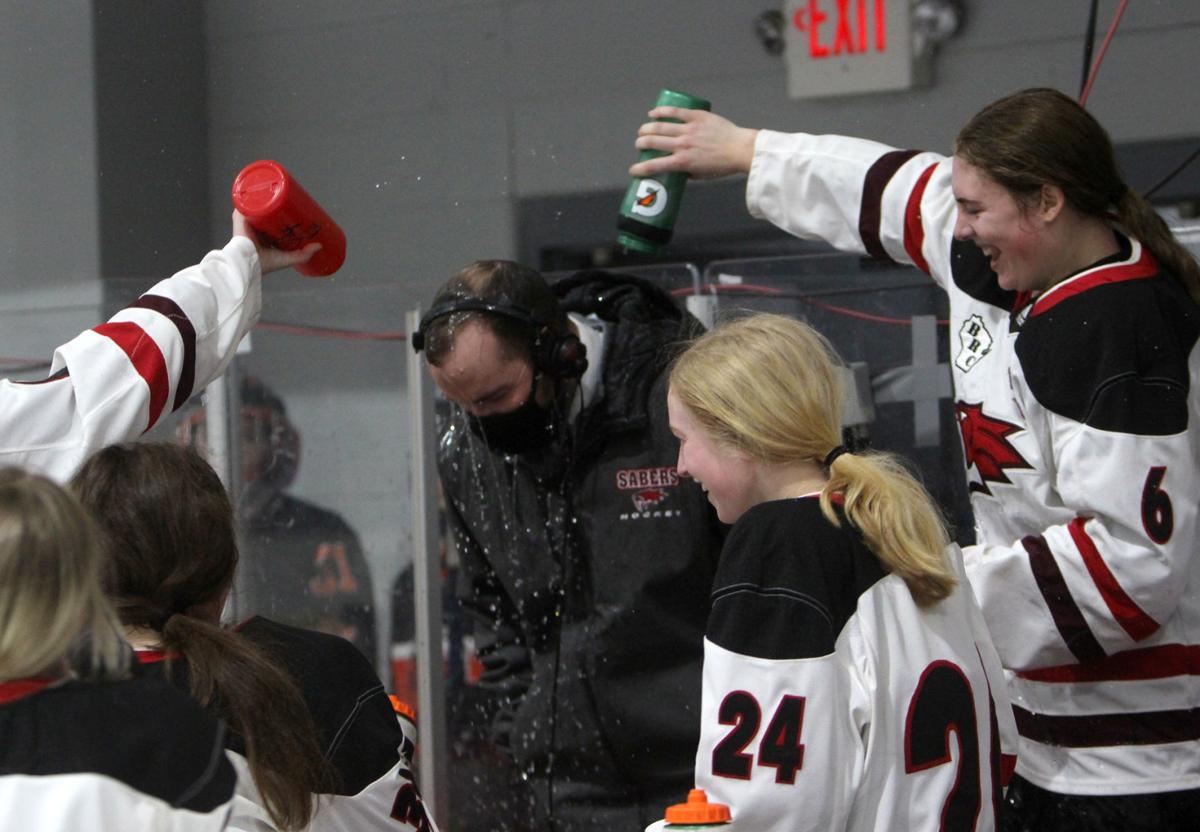 Chippewa Falls/Menomonie coach Tony Menard is doused with water after the win.

The senior scored just 40 seconds into the third period to put the Sabers on the board before the team ultimately earned a 3-2 overtime victory over the University School of Milwaukee in Saturday afternoon’s state championship game.

Ausman’s goal came early in the third after the Sabers had logged plenty of shot attempts on Wildcats goaltender Molly Jex but without getting past her.

The senior charged the net and broke the plane of the goal with her equalizer before a collision knocked the net out of place. The Sabers were celebrating the tying goal, but officials went to a replay to double-check the goal and after a few minutes it was ruled good to give Chippewa Falls/Menomonie the tying score as well as a boost emotionally.

“Thank God for instant replay,” senior forward Sidney Polzin said. “That was a big momentum changer, and at that point we knew we were tied now so we just had to keep working to get there.”

The Sabers were turned away on all 17 shots in the first two periods against Jex, but converted three of 11 shots in the third period and overtime including Joey Schemenauer’s game winner.

Overtime had not been kind to the Sabers prior to this week.

Chippewa Falls/Menomonie was 1-3-1 in overtime games during the regular season but moved that record to level for the season with a pair of victories in state games. Emma-Lyn Stephenson won the game in overtime for the Sabers on Wednesday in the team’s 4-3 semifinal victory at Central Wisconsin before Schemenauer came through with another walk-off win on Saturday.

The Sabers went to overtime twice during the regular season with Eau Claire Area, losing once and tying in the other. The Wildcats earned a 1-0 victory over Eau Claire Area in Wednesday’s other semifinal. Chippewa Falls/Menomonie also lost to Western Wisconsin and Hayward in regular season play, two losses the team avenged on the way to the co-op’s first state championship.

The most recent state appearance for a Chippewa Falls girls hockey team at state was also filled with heartbreak as the Chippewa Falls/McDonell co-op suffered a 3-2 loss in overtime to Fond du Lac in 2008 in the state semifinals.

Chippewa Falls/Menomonie is the third of the four Big Rivers Conference teams to play in a state championship game in the last four years. Eau Claire Area won the championship in 2018, and Hudson fell in double overtime to Fox Cities in 2019. The St. Croix Valley Fusion have made four trips to state with three-peat of titles from 2009-2011 and a semifinal appearance in 2014.

Saturday’s state championship adds another gold ball to the trophy case for each Chippewa Falls, McDonell and Menomonie.

The girls title game was the middle game of a three-matchup schedule of title games on Saturday in Wisconsin Rapids.

Fond du Lac St. Mary’s Springs opened action on Saturday morning with a 4-1 victory over Superior in the Division 2 boys state championship game. The Ledgers never trailed in scoring the first three goals of the game. Brady Welsch scored twice and Dayne Deanovich and Calvin Grass each adding goals as the Ledgers repeated as champions.

The Hudson boys won the Big Rivers its second state title of the day by shutting out defending champ Verona 4-0 in the state championship game. Carter Mears scored twice while Matthew Mauer and Alex Pottratz each added goals in the win for the Raiders as they outshot Verona 35-7. Hudson defeated Chi-Hi 4-2 in a Division 1 sectional final on Feb. 13.

Chippewa Falls/Menomonie celebrates after Ella Ausman's goal early in the third period is allowed on Saturday in Wisconsin Rapids.

Chippewa Falls/Menomonie coach Tony Menard is doused with water after the win.