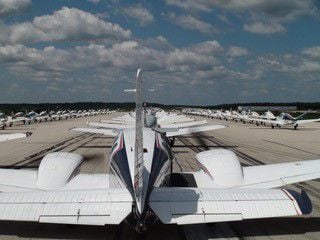 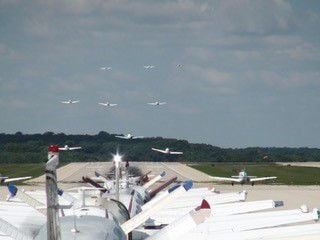 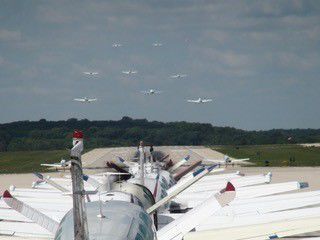 This annual takeoff normally takes place from Rockford, Illinois, but this year a demand in air delivery shipments from Rockford forced organizers to look elsewhere. They chose La Crosse.

Anyone interested in viewing can park in the Cell Phone Parking Lot next to the La Crosse Regional Airport Terminal and watch the more than 100 aircraft take off for Oshkosh.

Joe Pavela, who participates in the flight, shared the following details and photos with The Tribune:

“Bonanzas to Oshkosh began in 1990 when Wayne Collins and a few friends decided the only way to ensure camping together was to arrive together in formation.

Every year 100 plus Beechcraft Debonairs, Bonanzas, TravelAirs and Barons meet and fly in formation to Oshkosh. Every pilot must attend formation training each year to participate in this event.

Rockford, Ill., is their normal departure point. Due to the increased demand for shipments by air, the ramp space in Rockford was not available. This led to La Crosse being selected as an alternate departure point.

Larry Gaines is the current chief of operations, Craig Wilcox the director of flight operations, and Richard Schmidt the formation leader this year.

Upon the final ‘go’ decision, a flagman with a stopwatch on the side of the runway will signal for takeoff. Every 15 seconds, the flagman will signal, and 3 aircraft will takeoff together for a formation flight to Oshkosh for Airventure.

This is the 31st year of this event, and personally, my 10th year participating! Unfortunately, Mr Collins passed away a few years ago.”

After a season on the sidelines, drum corps is back with the Blue Stars’ River City Rhapsody Drum & Bugle Corps event on Friday at UW-L’s …

Here’s a look at how area members of Congress voted over the previous week.