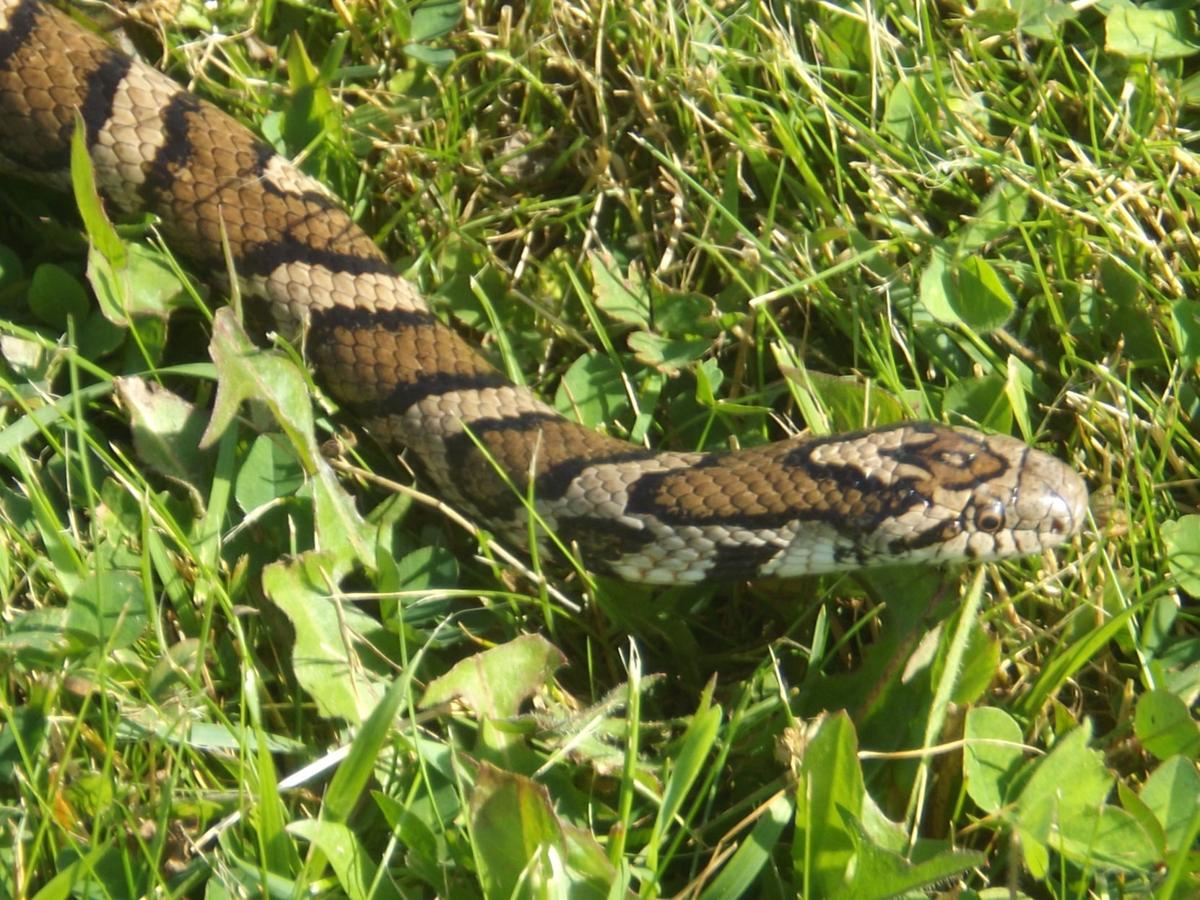 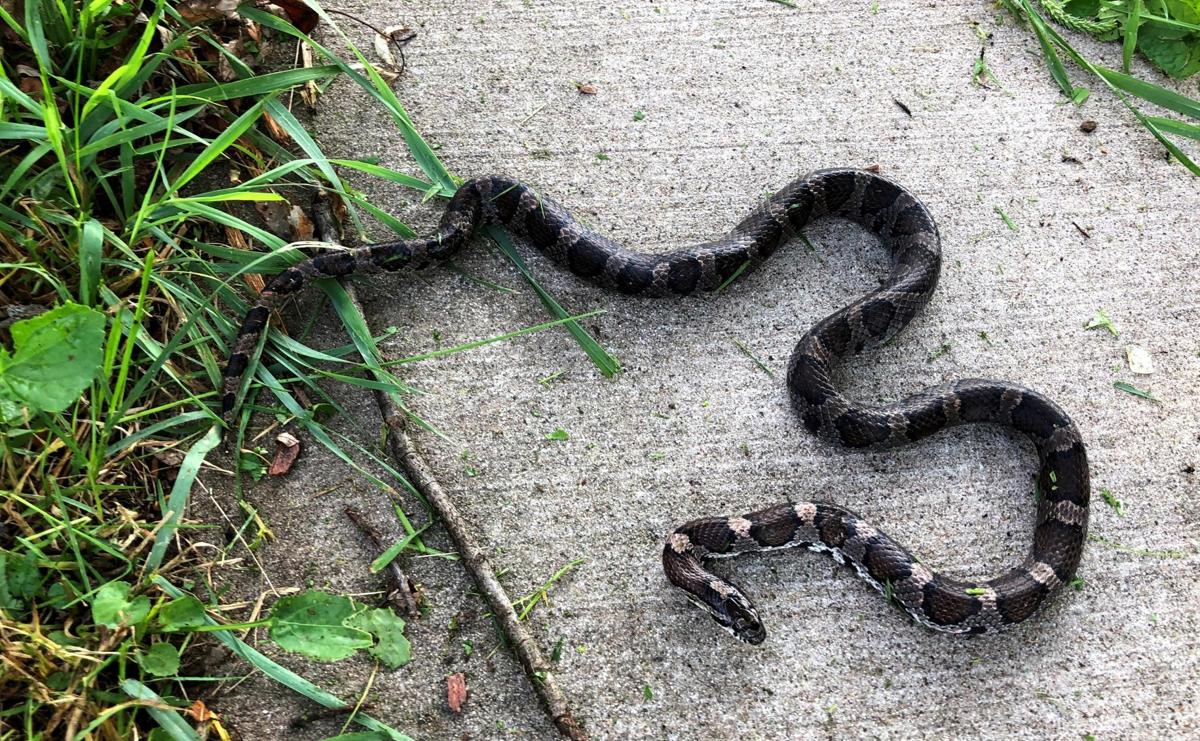 A possible milk snake next to Chris Hardie's home. 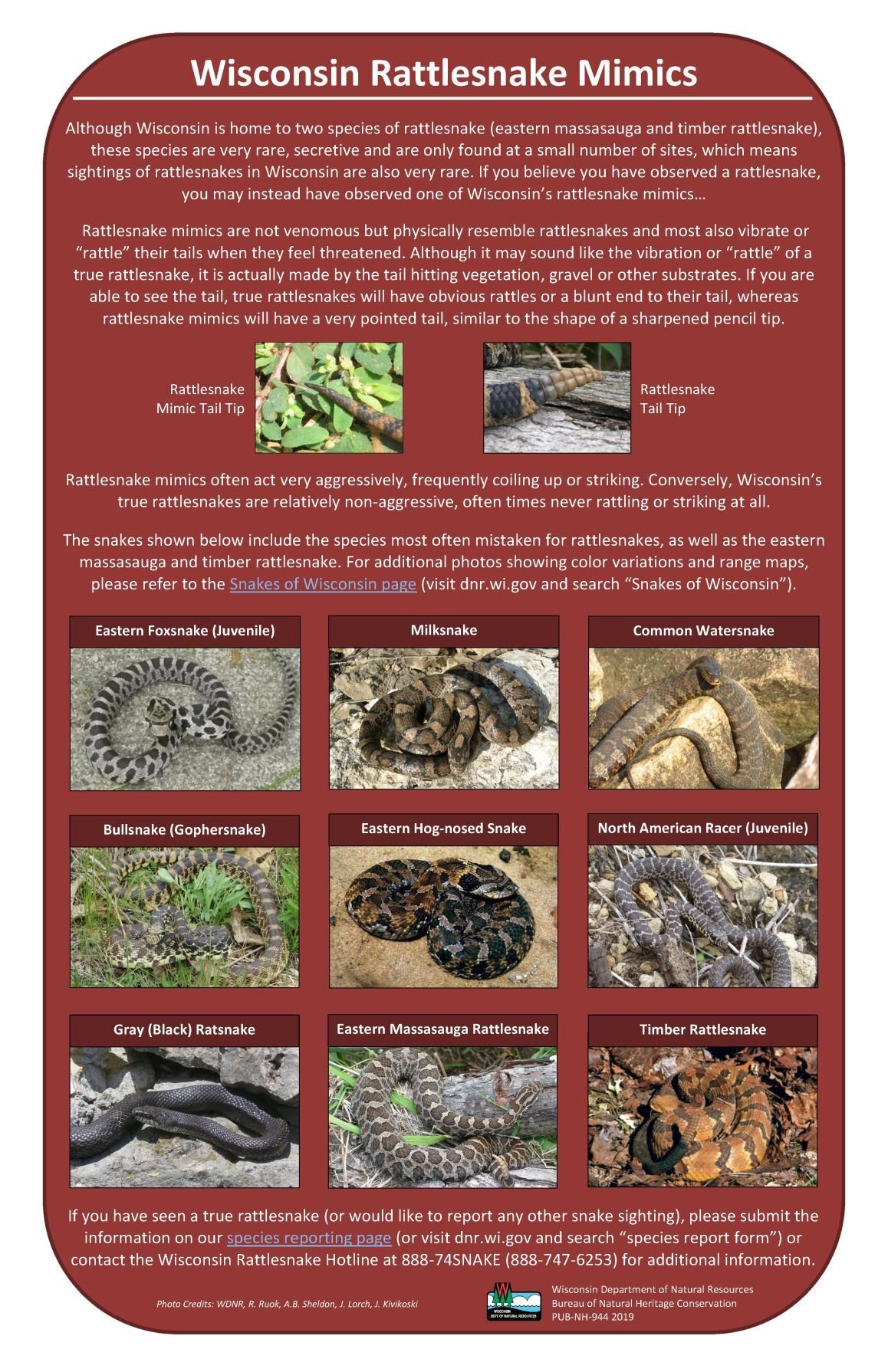 A Wisconsin DNR graphic shows some of Wisconsin's snakes.

Critter encounters are part and parcel with living in the country — they were here before us and will be here after us.

One coiling creature that is part of the farm is the silent and slithering snake.

While they mainly keep to themselves, inevitably during the haying season snakes in the field were gathered up in a hay bale. There would be tails, heads and snake parts sticking out of the bale — waiting for the first person to pull it out and unexpectedly throw it at someone else.

The garden is another favorite location for snakes.

Their appearance means the disappearance of my wife or mother — both of whom are not willing to share their space with what Dad called “slender fellows.” So either Dad or I would move the snake to a different location.

Snakes are beneficial creatures often maligned or misunderstood. They are friends to farmers, as the larger snakes eat mice and other grain-eating rodents.

The Wisconsin Department of Natural Resources says many snake populations are in decline because of habitat loss and human persecution.

Today there are 21 species of snakes in Wisconsin, of which 14 are considered rare and listed as endangered, threatened or of special concern.

I once unknowingly took a ride to town with a snake in my pickup truck. A few days earlier I noticed a two-foot-long snake sunning itself on the hood. When I approached, the snake dove down through the hood cowling into the engine area.

I drove about 10 miles to Melrose to get gas for the mowers. When I checked the oil on the truck, I opened the hood and there was a slithering stowaway, wrapped around a non-moving piece of the engine. You could call it my backup serpentine belt.

The snake survived the drive back and a few days later left its calling card — a shed skin on top of the radiator. I think it moved on to a more eco-friendly environment than a 300-cubic inch six-cylinder.

Recently I encountered another slender fellow. I had just started to cut grass near the house with a string-trimmer when there was sudden movement. Sure enough, out slithered a slightly annoyed snake about 24 inches long.

I stopped to take a photo before I relocated the snake with the aid of a long stick to a safer location out of the trimming zone.

I am not a herpetologist, but after painstaking research that involved a cup of coffee and Google, I have concluded based on the color pattern and size that the snake was either a milk snake or an Eastern foxsnake, also called a pine snake. Both are common in western Wisconsin.

Milk snakes are 2- to 3-feet long and are often found around farm buildings and older homes. It has a gray or light-brown skin color with reddish-brown or brown blotches bordered with black.

They feed on rodents and other small snakes. Because it hangs around barns, it was called a milk snake because legend has it that the snake would suck milk from cows.

The other possibility based on the color pattern is the Eastern fox snake. But these snakes are normally 3-feet to nearly 6-feet in length, although they like to hang around farms because they too enjoy a rodent diet and old buildings.

The DNR says fox snakes are also often mistaken for rattlesnakes, as they often “rattle” their tails in dry leaves, grasses or against objects when disturbed.

Their pointed tail distinguishes them (and all other Wisconsin snakes with pointed tails) as a non-venomous species in Wisconsin. They also produce a musky odor similar to that of the red fox when handled, hence their common name “fox snake.”

Fox snakes are constrictors, grabbing prey with their teeth and wrapping themselves around it to stop its breathing before swallowing it whole. But fox snakes don’t hatch until late August and are about a foot long at birth, so the timing doesn’t match my siting.

However, a third candidate emerged after a third cup of coffee and some additional keystrokes: the Eastern hog-nosed snake. These snakes are also common in my neck of the woods.

The color pattern is similar and the size is right (20 to 35 inches), but the head seemed a little too small.

My vote is for the milk snake. This was a dairy farm for many years, after all. No matter what species it was, I wish the serpent and all of its slithering associates all the best — and please practice social distancing.

Growing up on the farm meant plenty of chores and hard work, but there was always some time for exploration. With more than 700 acres of woods…

The Holmen Area Community Center has appointed three new members to the board of directors, each bringing experience and talent to round out t…

While the debate continues whether School Resource Officers are necessary to schools, the Onalaska and Holmen school districts are fortunate t…

Living in the country without the municipal services provided to our urban friends can be a blessing or a curse.

A possible milk snake next to Chris Hardie's home.

A Wisconsin DNR graphic shows some of Wisconsin's snakes.