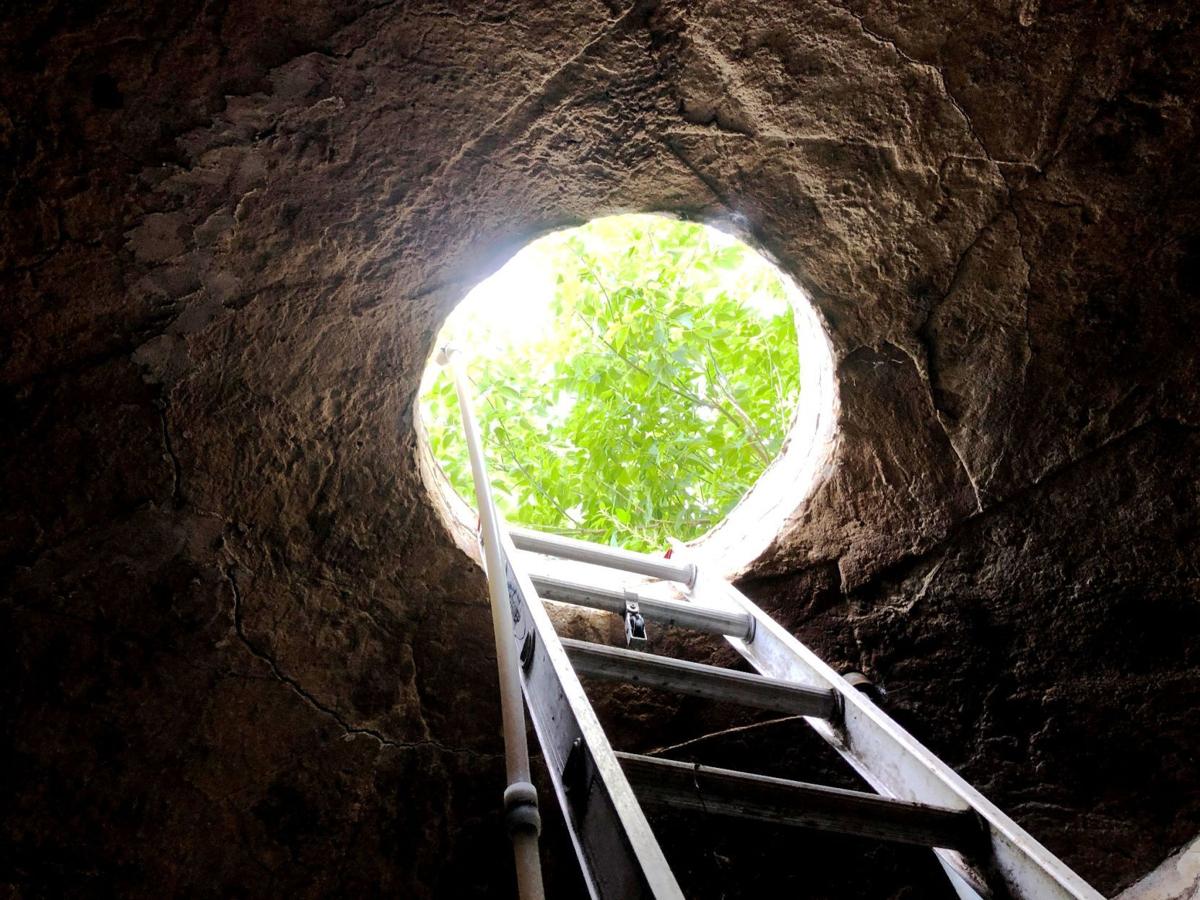 Looking up to the top of the old cistern on the farm that is still used to house our water system. 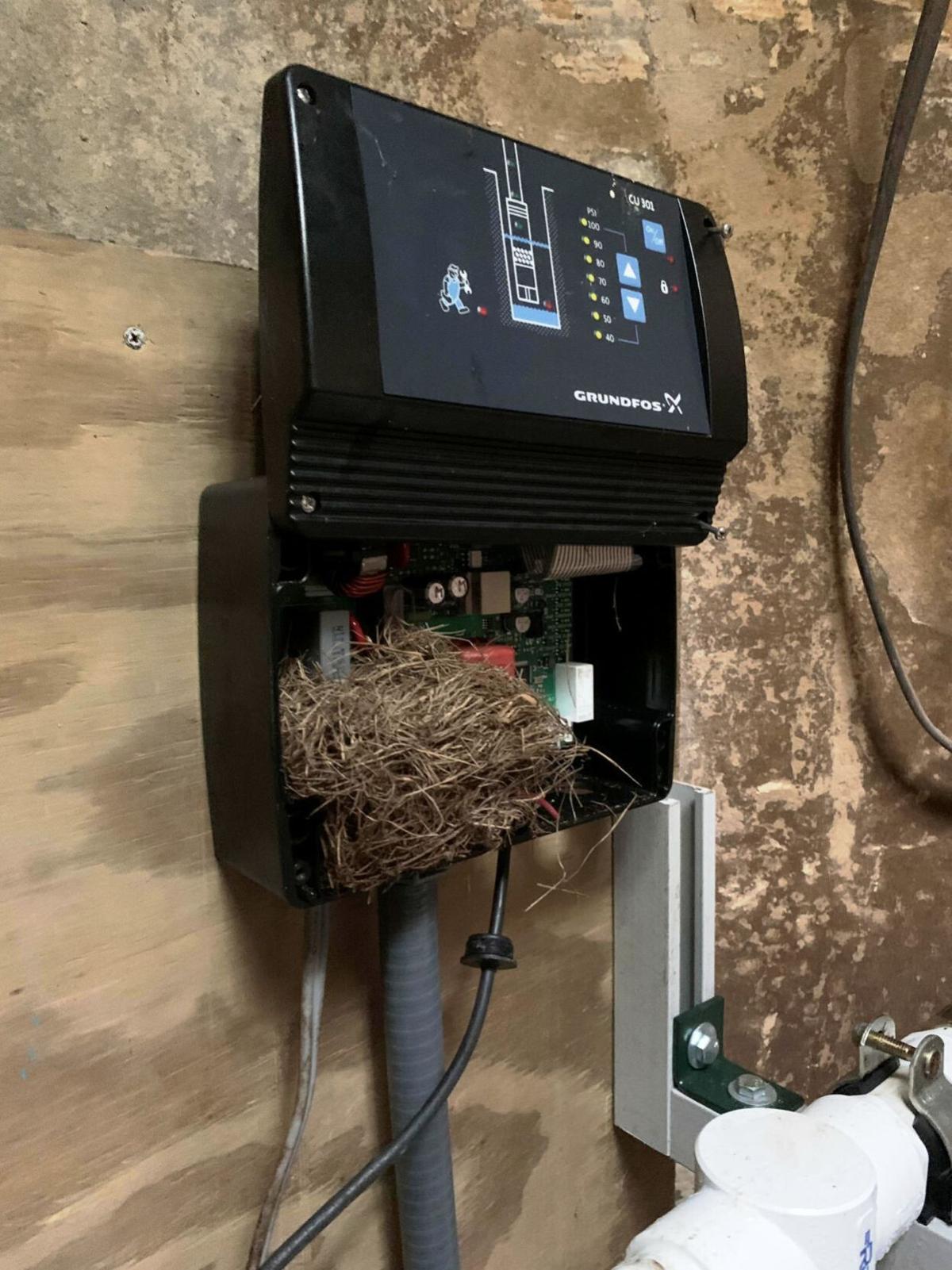 A mouse nest built inside the well system control unit shorted out the system. 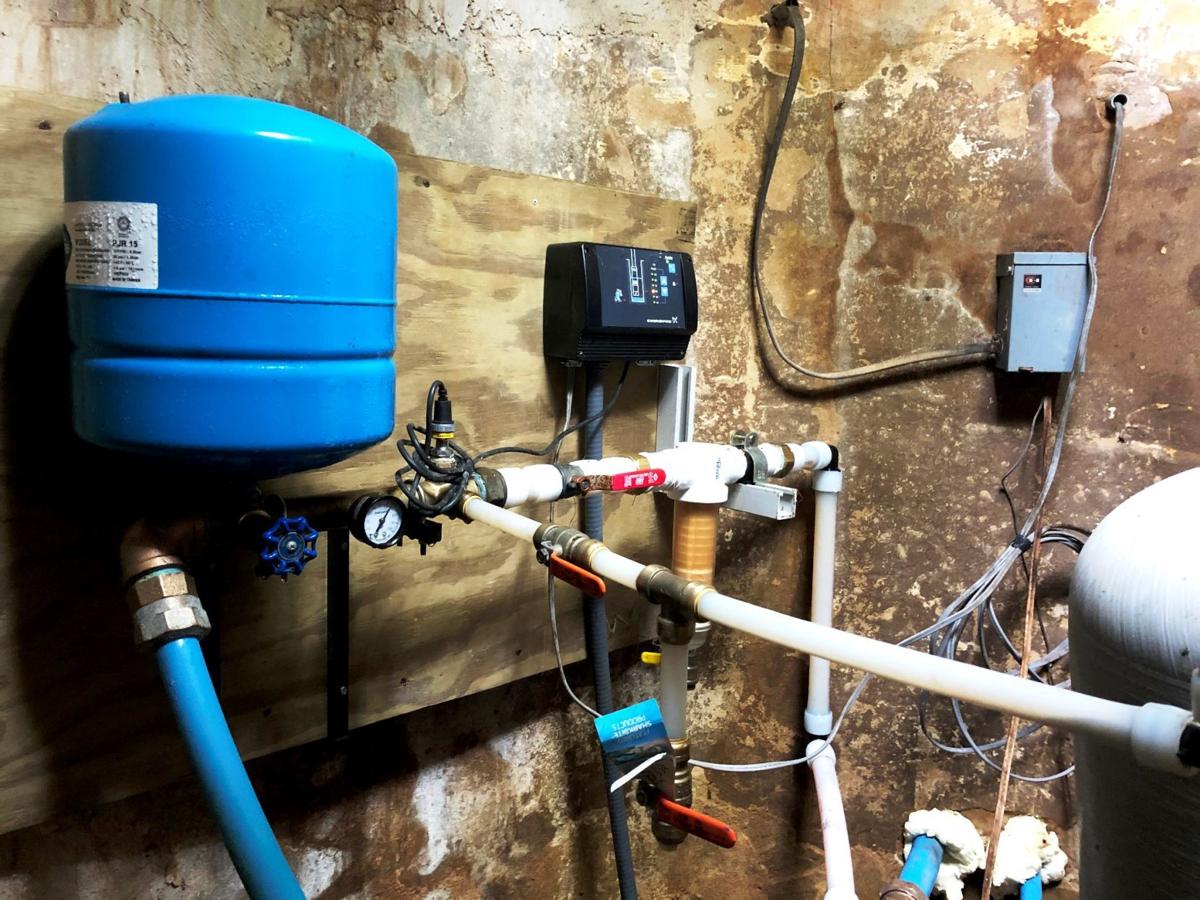 The new water system is mounted on a wall next to the old pressure tank.

Living in the country without the municipal services provided to our urban friends can be a blessing or a curse.

Country folk don’t have to pay water and sewer bills or worry about sidewalk fees assessments. But we have to rely on our own water well and sanitary system, which depending on the age and reliability, can present its own sometimes expensive challenges.

When we moved back to the farm in 2006 and remodeled my great-grandparents’ house, one of the first orders of business was to put in a new septic system. The existing system consisted of an old metal tank buried in the ground with more or less a trench that was covered with some rusty sheets of tin. Let’s just say it was not up to code.

Since we were opening a lodging facility with five bedrooms — which are a critical factor in determining the size of a sewer system — we went through a significant upgrade that will hopefully last the rest of our lives.

But we didn’t do anything with our well, which was original to the homestead dating back to the earlier part of the 1900s. It was once powered by a windmill, made by the ubiquitous Aermotor Windmill Co., which was emblazoned on the tail. The company started making windmills in 1888 and still makes them today.

The farm’s windmill was used at least through the end of the 1940s as electricity did not arrive until then.

The mill would draw water from the well through pipes that went above the ground, then fill an underground rock cistern in the hillside.

The cistern would provide water to the house and the barn through gravity and the water (in theory) would drain back down into the well when the pump shut off to prevent it from freezing.

Eventually an electric pump was installed, but we continued to use the well. The pressure tank sat on the bottom of the cistern. The cistern still holds water, which we found out the hard way a few years ago when the metal pressure tank sprang a leak and the cistern filled. Even though the fuse box was underwater, it never shorted out.

My parents drilled a newer high-capacity well in the early 1970s to handle a larger dairy herd, but the old well has much better water. There is little iron — a rarity in these parts — and the taste is delicious.

We’ve had some maintenance issues the past few years with the old well design and its 4-inch pipe did not not provide enough water when we added an event center, so we had to drill a new well.

I had the new well drilled close to the old one with the hopes that we could hit the same excellent water vein. They came close, but we’ve had to add some additional filtration to deal with sand and iron issues.

But we now have a state-of-the-art country well with a computer-driven water monitoring system that provides constant pressure without the need for a tank.

New does not mean infallible, however. Recently I got up in the middle of the night to answer the call of nature — which seems to happen more as I get older — and I flushed the toilet only to be greeted by the sound of a trickle of water refilling the tank. I turned on the bathroom tap and the water stopped running.

Since we had no guests, I was content to wait until daylight to investigate. Just after dawn broke, I checked a few more taps both inside and outside. Nothing. I checked the breaker box. All good.

Did I mention we have a state-of-the art water monitoring system powered by a computer? That monitor is installed at the bottom of our ancient rock cistern. So I removed the covering, powered the flashlight on my phone and descended the 12 feet to the bottom.

The monitor was dead. No lights. I pressed the power button. Nothing. It was still plugged in, but clearly not working. Using the age-old method of unplugging and plugging it back in, I kept my fingers crossed. But there was only darkness at the bottom of a pit.

So I climbed up back to the daylight and texted my plumber. He replied in a few minutes that he’d be there as soon as possible. Thankfully I had enough water in a pitcher that I could make my morning coffee to partially compensate for the bad morning.

I was gone when the plumber arrived, but I had steeled myself for the worst. A new computer system at the very least, perhaps a pump. But what the plumber found when he took off the cover to the monitor was not a technology issue but a trespassing issue caused by a squatter.

A mouse had managed to wriggle its way through a crack where the electric cord feeds and decided to take residence inside the monitor by building a massive nest. It was this ball of grass and weeds that shorted out the system.

Once the nest was removed, the system booted back up. The rodent entrance was sealed and we were back in the water business.

I’m not surprised that such a small critter could cause a major problem. I heard that the cause of many power outages is sometimes a larger cousin of the mouse — a squirrel — wreaking havoc in a substation.

And the pesky mouse will need to find another house.

Growing up on the farm meant plenty of chores and hard work, but there was always some time for exploration. With more than 700 acres of woods…

The Holmen Area Community Center has appointed three new members to the board of directors, each bringing experience and talent to round out t…

Chris Hardie: No quivers if it slithers

Critter encounters are part and parcel with living in the country — they were here before us and will be here after us.

While the debate continues whether School Resource Officers are necessary to schools, the Onalaska and Holmen school districts are fortunate t…

Looking up to the top of the old cistern on the farm that is still used to house our water system.

A mouse nest built inside the well system control unit shorted out the system.

The new water system is mounted on a wall next to the old pressure tank.