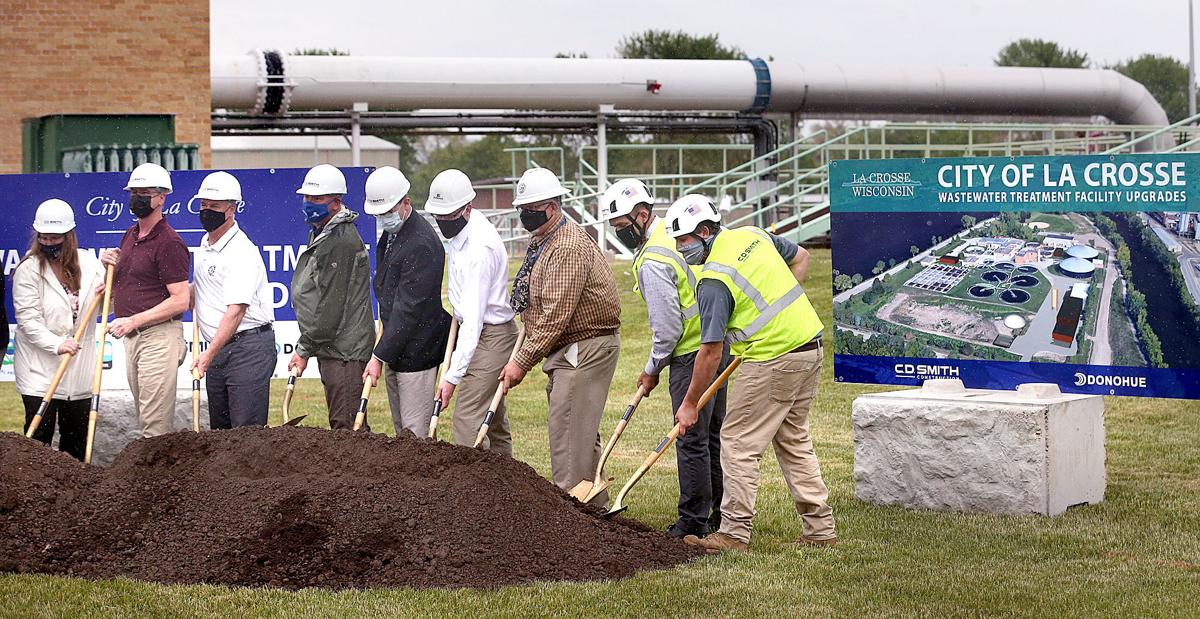 Elected officials, city staff, contractors and other community members participate Tuesday in a groundbreaking ceremony for upgrades at the Wastewater Treatment Facility. 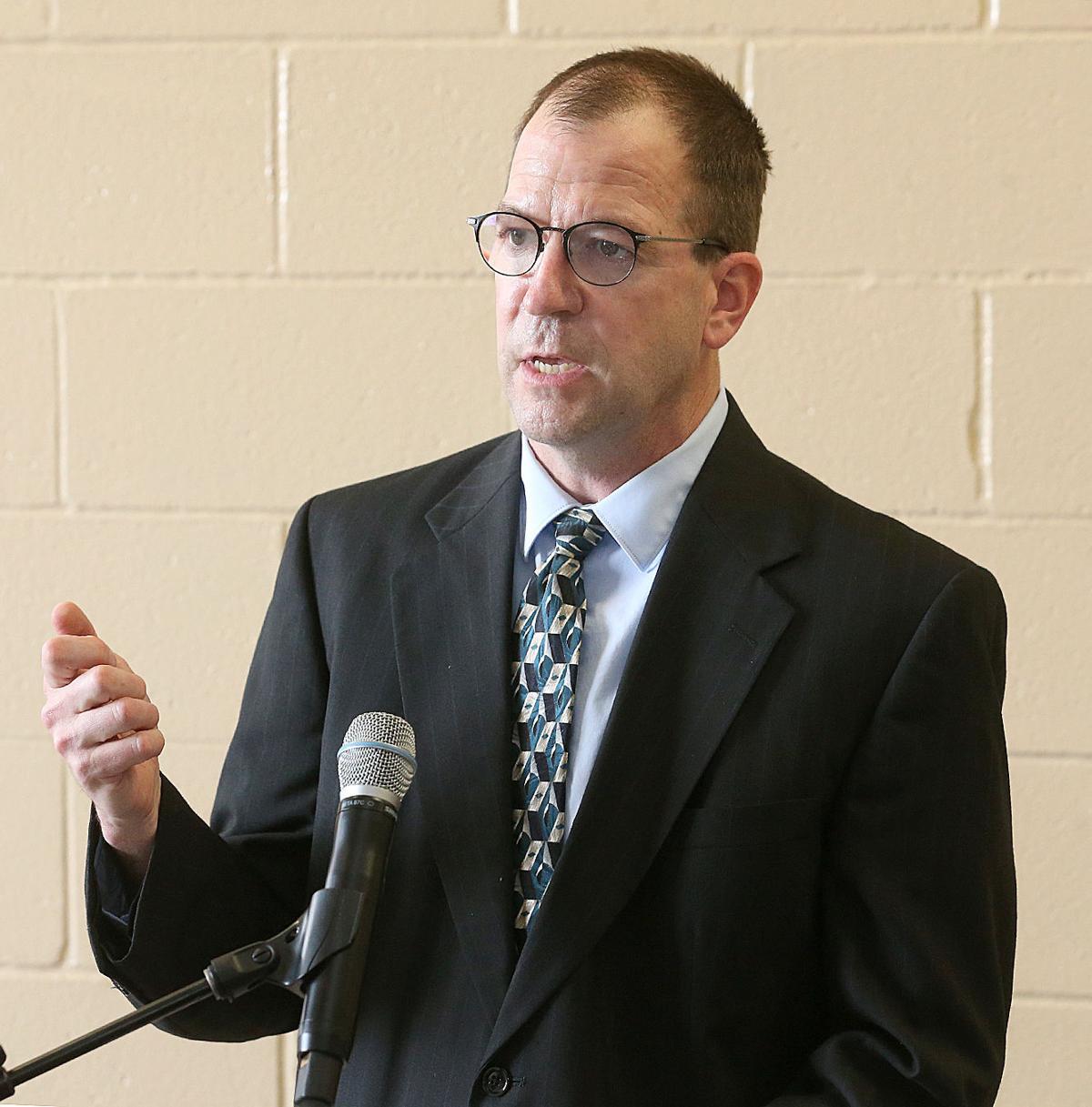 The roughly $68 million expansion at the La Crosse Isle La Plume Wastewater Treatment Facility has officially begun, marking the start of a project that aims to make the city’s waste operations more environmentally and cost efficient.

Officials broke ground at a ceremony at the facility Tuesday, with representatives from the various partnering communities who use the facility digging their shovels into the ground to mark the occasion.

The expansion project was largely driven by a need to meet new state standards on phosphorus pollution, but also helps the city make many more much-needed improvements, officials said.

“It is really positioning us towards a future of incredible levels of sustainability and efficiency, and the ability to handle new” requirements as they come along, said La Crosse Mayor Mitch Reynolds, who called the project “historic and monumental.”

The wastewater facility provides services to the city of La Crosse and its municipal partners of La Crescent, Campbell, Shelby and Onalaska, and officials said that it’s possible it is the largest public works project in city history.

The big component of the project will be environmental, and new regulations by the state on how much phosphorus can be discharged from the plant will begin Jan. 1, 2025.

“And since the facility improvements will take several years to complete and optimize, breaking ground this spring was critical to ensure the WWTP stays compliant,” the city stated in an info sheet.

To address the phosphorous output, the plant’s existing biological treatment systems will be upgraded to enhance the removal of the mineral, which can be harmful to the environment, specifically aquatic areas. A new filtering system that “captures the last bits” of phosphorus and a rotary filter membrane will also aid in this process.

Another big win for the community’s environmental goals includes estimates that the plant can achieve energy neutrality for electricity with these upgrades, while also setting it up for future sustainable initiatives such as becoming energy neutral for gas, as well.

This big feat is being accomplished by installing a gas scrubber, which cleans the methane used to power the plant so it can be used in a biogas fueled engine generator. That waste heat is then captured and reused, reducing the natural gas consumption.

The city is also installing a biogas storage sphere to better aid this process.

The expansion of the facility, which is located on the west side of the city along the Mississippi River, also will make it more reliable, flood resilient and give it more capacity.

Specifically, the facility will get a new fine screen system, which removes large debris and rags from the raw sewage that enters the plant, which then protects equipment and other mechanisms downstream.

The new plant also will have the capability to create more biosolids, which can then be used as fertilizer or burnt as a renewable energy source, and a new structure that will allow crews to lift the treated water to the flood-stage along the river in events of high water.

Other aging pieces of equipment nearing their expiration will be replaced during the project.

The city’s sewage system has come a long way, officials highlighted, with the first sewers built in the 1800s, which dumped directly into the river untreated. Now the facility will be able to instead use the city’s waste and turn it into reusable materials such as fertilizer or bio fuel.

“This is a very big deal,” utility manager Bernie Lenz said of the project, noting how infrequent the facility has been upgraded since it was built in 1930.

The project will play a major role in regional collaboration, showcasing the work and improved services that can be accomplished, officials said, and will also help address region-wide issues down the road, such as PFAS.

“The Wastewater Treatment Plant is the epitome of regional collaboration,” Reynolds said. “What we’re doing here today, in order to not only meet different requirements for contaminants and dealing with those, but also increasing efficiency and sustainability, these types of things are not possible on smaller scales.

“Working together collaboratively I think creates an enormous benefit, for not just the city of La Crosse,” he said, “but also our regional partners.”

The expansion project is being done by the construction crews with C.D. Smith Construction and engineers at Donohue & Associates, and is expected to take several years to complete.

"Since the facility improvements will take several years to complete and optimize, breaking ground this spring was critical to ensure the WWTP stays compliant."

I’ve always been a bit of a weather nerd, as longtime readers already know, but recently our wild weather ride ventured into the ridiculous category.

Elected officials, city staff, contractors and other community members participate Tuesday in a groundbreaking ceremony for upgrades at the Wastewater Treatment Facility. 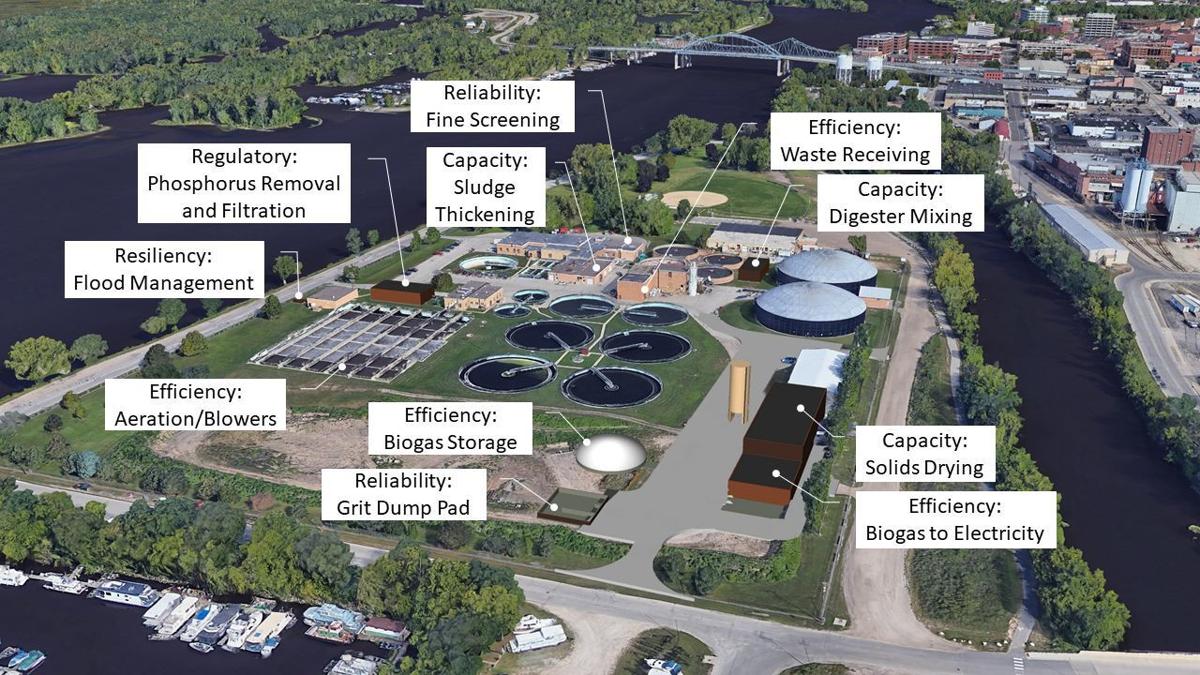 A map shows where expansions and upgrades will be made to the La Crosse Isle La Plume Wastewater Treatment Facility. The project broke ground Tuesday.