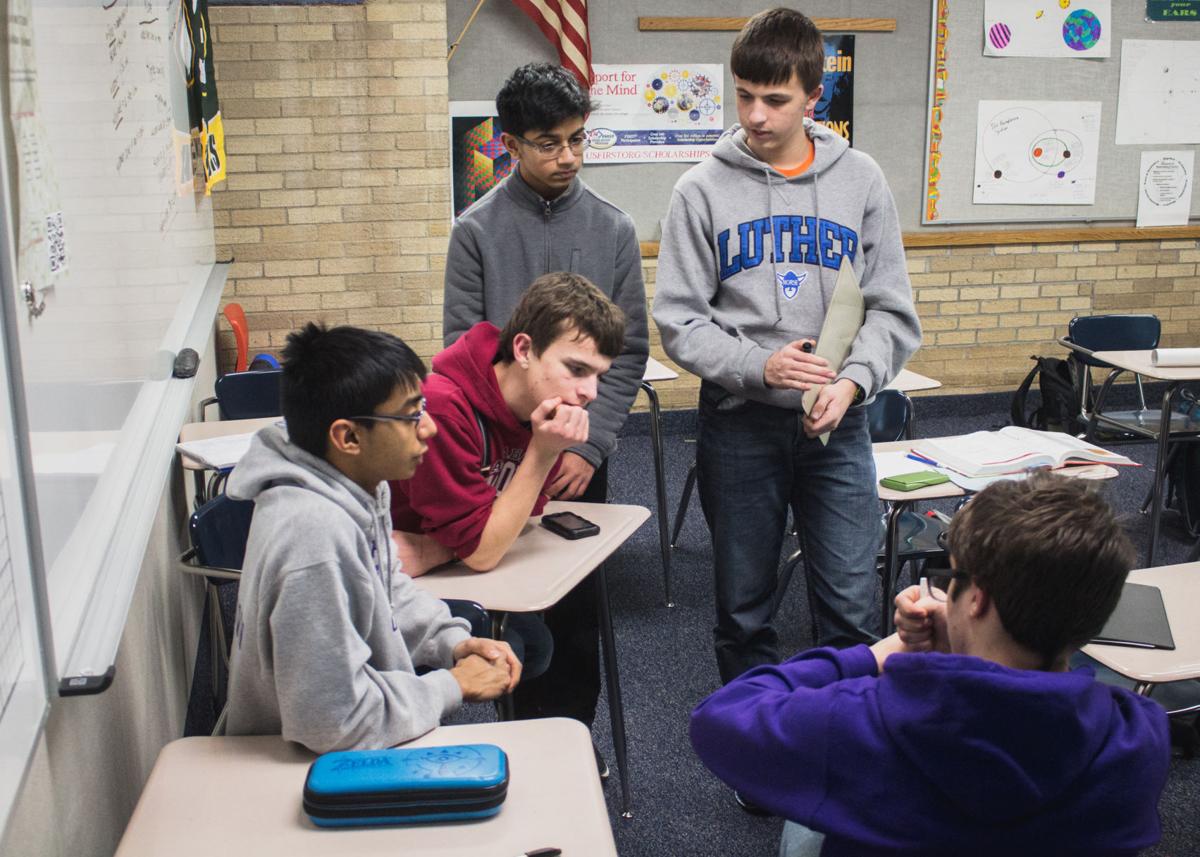 Onalaska robotics students brainstorm solutions and strategies for this year's First Robotics Competition. The students have just six weeks to build, program and test their robot before the competition begins. 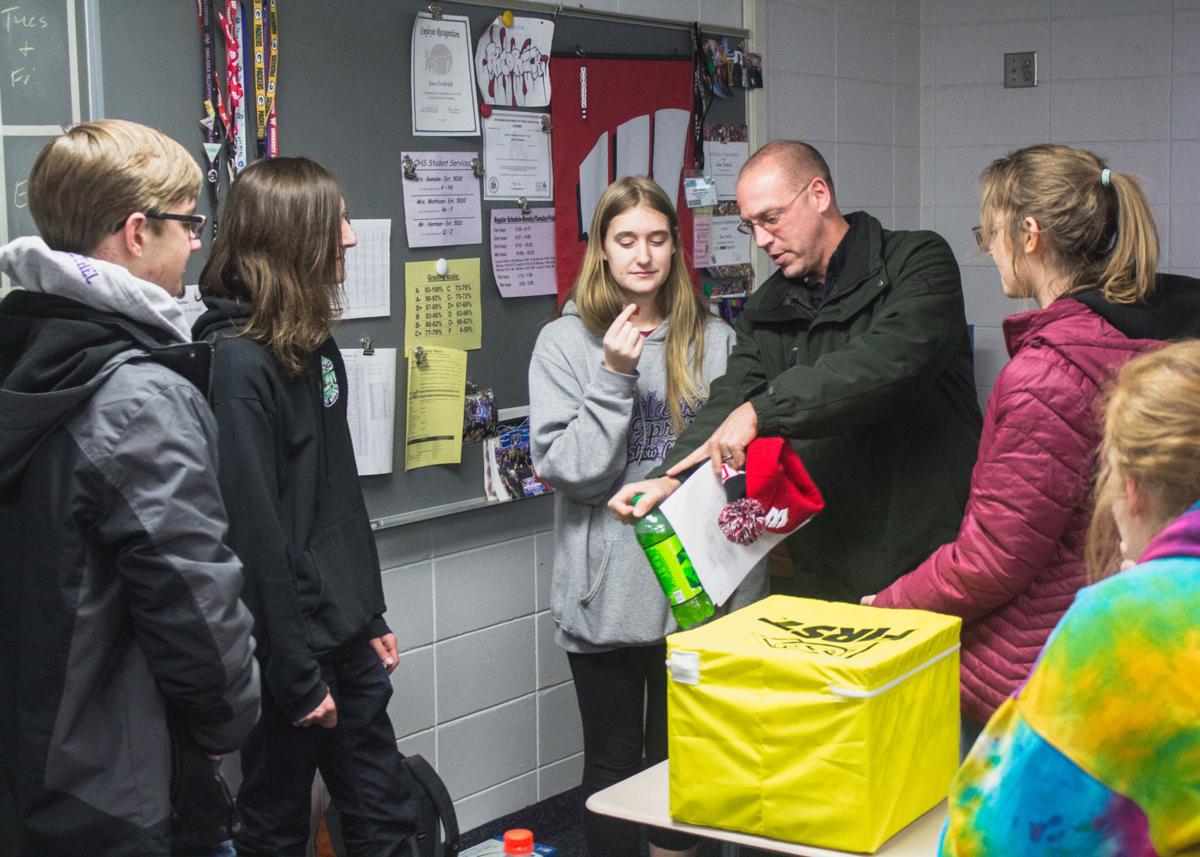 Members of the Onalaska robotics team gather around a mentor to discuss mechanisms to overcome this year's First Robotics challenge.

Within minutes of the 2018 First Robotics Competition being announced last Saturday, teams all across the Coulee Region were already hard at work brainstorming ways to overcoming this year’s challenges.

This year’s competition leaves the age of steam behind and jumps straight into cyberspace with a retro-arcade themed challenge dubbed First Power Up.

The competition will put teams and their robots in a “TRON”-like scenario where they’re trapped in an arcade game and have to use their robots to escape by taking control of various switches and scales set throughout the field.

A team takes control of a switch of scale by piling on enough “power cubes,” which are located throughout the map. The final challenge will require teams to design their robot to hoist itself seven feet off the ground, and unlike last year’s climbing challenge there is no rope.

During the first 15-seconds of the competition, team’s robots must function autonomously, without out any assistance from students drivers. After the time has elapsed, teams will be allowed to take control of their robots and pilot them around the field.

The teams will have the option of using retrieved cubes to gain bonuses throughout the match, kind of like a power-up in an old arcade game.

“I’m pretty excited about the competition,” he said. “To me, it feels more like an interactive game than a robot with a student driving it.”

As for the obstacles themselves, Moulton has mixed feelings.

He said there are so many ways to score points, the teams that do the best will be those that spend the most time finding the most efficient way to do it.

“There are 20 or 30 different strategies that can be had and you have to figure out which one is the best,” Moulton said.

Onalaska senior and four-year robotics veteran Sawyer Hansen said he was confident the team would be able to overcome the obstacles.

“I think this year’s challenge is really interesting,” he said. “It has a lot of different complexity to it.”

Hansen said there seemed like there were more things the robot had to do in last year’s competition.

Fredrick agreed and added, “my initial opinion is that it isn’t as challenging as in the past, but I’m probably wrong on that.”

He said he was excited to see more opportunities for students to get involved during the competition.

Fredrick said in the past only two of the four-member drive crew were actively involved in piloting the robot. Now students will be required to make decisions about which “power-ups” they should use to give them an edge.

“If one kid is driving, a lot of kids have to take a back seat,” he said.

Newcomers to Onalaska’s robotics team freshmen, Ashley Bray and Nadia Tak were excited to be a part of the robotics team.

“I thought it would be fun to learn how to put things like electronics together,” Bray said. “I don’t know much about electronics, but I know about tools and how to put metal to metal.”

Tak said she saw robotics as an opportunity to learn life skills.

“I can’t wait to see how it will do in the competition,” she said.

Mouton said the first week of planning, the biggest challenge his team has faced is figuring out what strategy is going to get them the most points.

Fredrick however, is focused getting his team of 20 to agree on a design.

He said it’s an opportunity for the students to learn to work together and reach a consensus.

“If your idea is better, you need to go out of your way to spin it and sell it and be a leader of your team,” he said.

Moulton, who commands a team of 26, has turned to a majority vote when deciding the best design for the robot. He said with such a short deadline ahead of than the team needs to have a plan buttoned out by the end of the first week. Moulton added that while they have six weeks to complete their robot, in practice, the build can’t take much longer than three or four weeks.

“The building is just a fraction of what we have to do,” he said. “We still have to program it… then we have to practice driving.”

Moulton said if they start building on Saturday, which has traditionally been the teams biggest build day, they should be on track to complete their robot on time.

“Right now, we could have a driving box, which would take us about two hours to make,” he said. “The hard part is how we are going to overcome the obstacles of this game.”

Hansen said he didn’t expect lifting or moving the cubes to be a problem because many of the team’s previous robots have had similar functions.

Tak suggested a mechanism that would scoop the cubes up with a shovel. He said finding a way to hoist the robot off the ground without the aid of a rope will be the challenge.

Fredrick said the solution to this challenge would require his students to use skills taught in his class.

“You have to climb, and the thing to grab onto is seven-feet tall,” he said. “Last year there was a rope.”

He said the most significant benefit of robotics is the application of math and physics which is hard to teach in a classroom.

“This is hands-on and the kids are just super into it,” he said. “The kids who in here are really passionate.”

At the end of the six-week build season, teams will tag and bag their robots until the first skirmish on Feb. 18, at Aquinas, where teams will have the opportunity to work out any remaining kinks.

The first regional competition is set for April 5-7 at the La Crosse Center. There, teams will compete against 52 teams for the top spot and a chance at the national competition.

Onalaska robotics students brainstorm solutions and strategies for this year's First Robotics Competition. The students have just six weeks to build, program and test their robot before the competition begins.

Members of the Onalaska robotics team gather around a mentor to discuss mechanisms to overcome this year's First Robotics challenge.