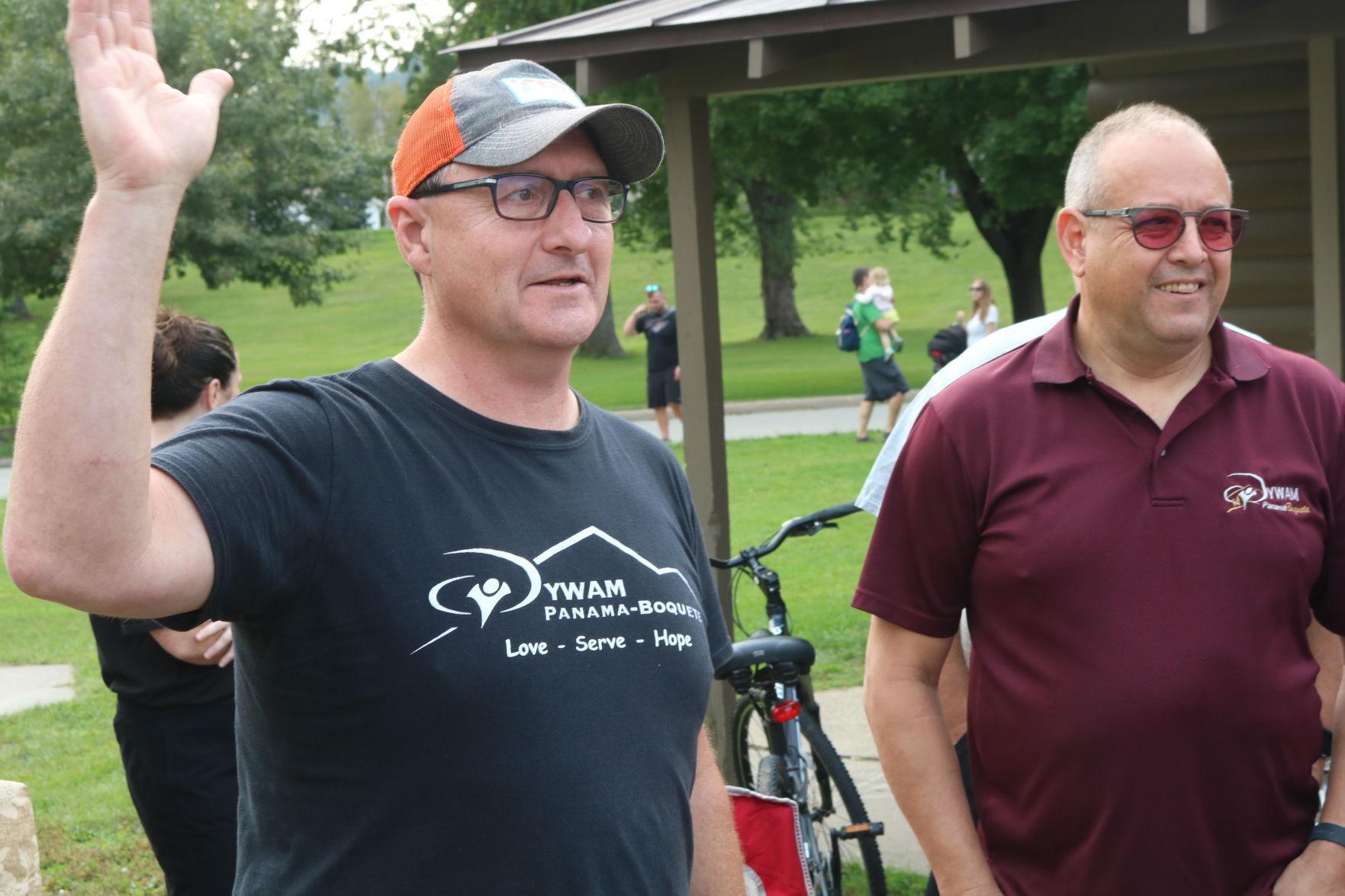 5015 Mike Hackworth of La Crescent and Richard Tracy, director of the Hogar School and youth home in Panama welcome riders to Myrick Park on Saturday. 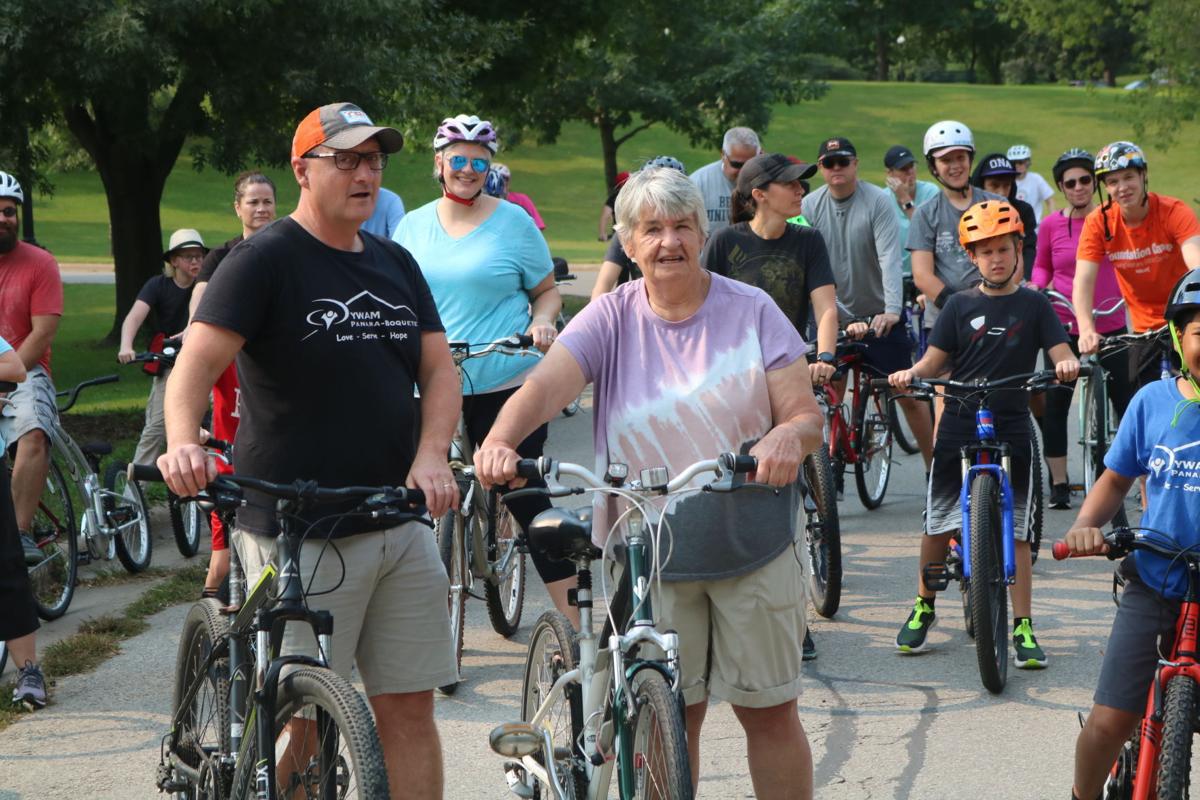 Mike Hackworth of La Crescent and Cathy Pierce of Pittsburgh lead the riders at First Free's Ride for Panama at Myrick Park on Saturday. 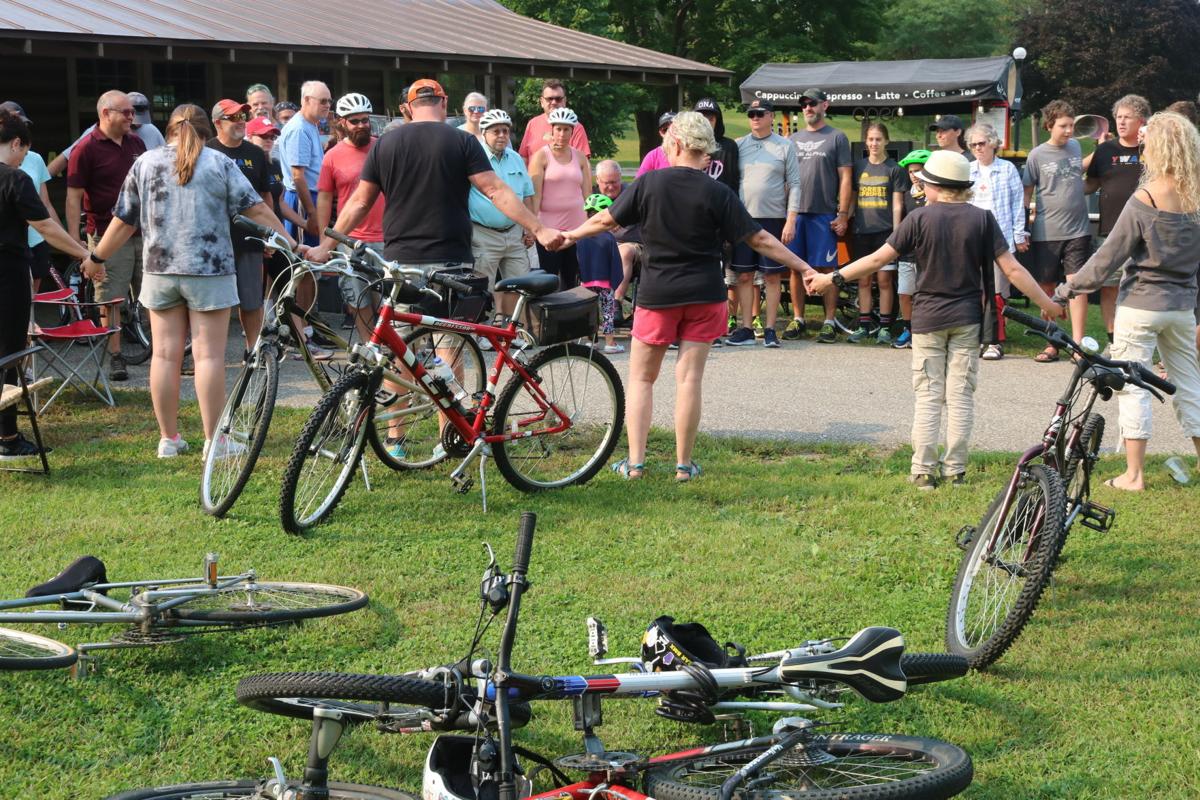 Riders at the third annual First Free Bike for Panama pause for a moment of silence to remember victims of 9/11 and prayer at Myrick Park.

When Mike Hackworth signed up for a missions trip to Panama three years ago, he had some serious doubts. His daughter, Lilly, then a high school senior convinced him to join her and nearly 50 others from First Free Church in Onalaska. The mission: to help improve the lives of three indigenous mountain tribes. But what happened changed his life as well.

“I realized that Christians weren’t weird or some kind of cult,” he said looking back on that first trip. “They were just truly interested in my life and showed me how to have a personal relationship with Jesus.”

During the trip, Hackworth, a La Crescent resident, met Cathy Pierce from Pittsburgh who coordinated bike-a-thons in her home state to support the Panama mission. An avid biker himself, Hackworth realized he had suddenly found a way to put his newfound faith into action. Returning from the mission, he pitched the bike-a-thon idea to church leadership at First Free.

On Saturday, over 75 people from around the Coulee Region gathered to mark the church’s third annual Bike for Panama, a six-mile round-trip from Myrick Park to Riverside Park and returning to the gun shelter. Anticipating proceeds of around $5,000, Hackworth said the money will go toward finishing a dorm complex at the Hogar school and youth home in Boquete, the city closest to the mountain tribes.

“All education in Panama is fee based, so the further you are from a metro area, the less likely you are to go to school,” explained Hackworth. Students living a three-day walk through the mountains from the city now have the opportunity to live and study close to schools. “We’re not trying to take away indigenous culture or acclimate them to American standards,” stressed Hackworth.

Richard Tracy, founder and director of Hogar school and a Wisconsin native, said that before the mission, parents from tribal regions who sent their children to the city often lost them to traffickers, gangs or the cartels. “This program has created a new option,” he said. “Some of our graduates have gone on to universities and are now community leaders.”

Dr. Evan Nelson and his wife Maggie of La Crosse helped lay the groundwork for First Free’s outreach to Panama in 2007. Since then, 21 teams have made the trip overseas to build churches, and conduct women’s health and discipleship programs.

Several of the tribes are the poorest of the world’s poor. “It’s a rugged trip and not everyone is able to go,” Maggie noted. Looking around at all the bikers she said, “This raises awareness and Mike is a big piece of this.”

And for Hackworth? He’ll keep training for another Ride Across Iowa. But he’ll have a permanent connection to Panama. His daughter Lilly is a full-time missionary there and will soon marry a national Panamanian.

La Crosse area residents between the ages of 50 and 90 are sought for research on wearing face masks with exercise.

Back roads from Wisconsin's past

WEST SALEM, Wis. – The village of Neshonoc was one of those towns whose fate was decided by the railroad. But its long legacy of providing power, first for milling and later for electricity, still services the area. The residents of the town, along with many of its buildings, moved to nearby West Salem – so the town never really died; it just relocated.

The Suicide Prevention Initiative Awareness Event on Wednesday at Riverside Park has been canceled due to coronavirus concerns.

5015 Mike Hackworth of La Crescent and Richard Tracy, director of the Hogar School and youth home in Panama welcome riders to Myrick Park on Saturday.

Mike Hackworth of La Crescent and Cathy Pierce of Pittsburgh lead the riders at First Free's Ride for Panama at Myrick Park on Saturday.

Riders at the third annual First Free Bike for Panama pause for a moment of silence to remember victims of 9/11 and prayer at Myrick Park.