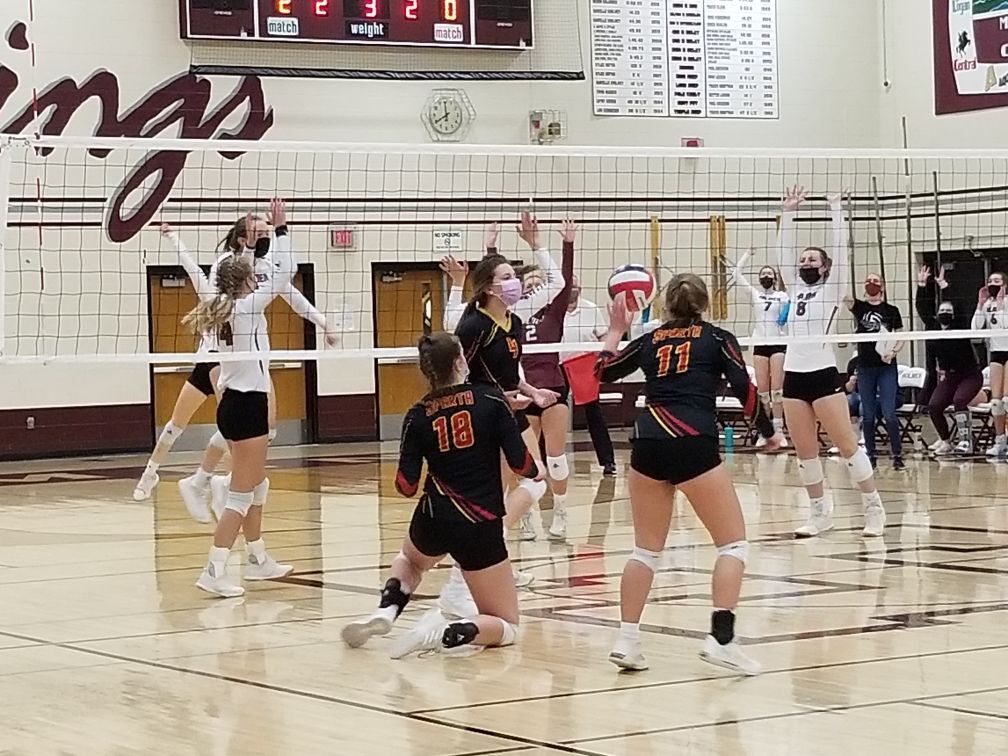 The Holmen High School volleyball team celebrates a point during its 25-18, 25-17, 29-27 victory over Sparta at Bernie L. Ferry Field House on Thursday. 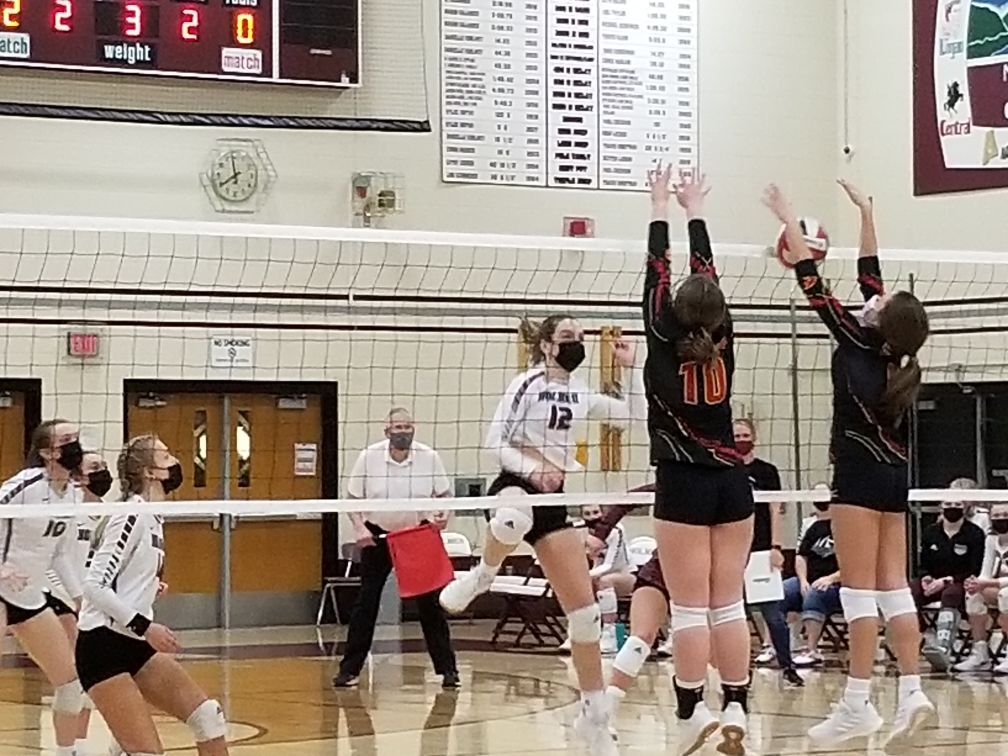 Sophomore Kyla Christnovich attacks at the net for the Holmen High School volleyball team on Thursday. The Vikings remained unbeaten by sweeping Sparta 25-18, 25-17, 29-27 on Thursday.

HOLMEN — The Holmen High School volleyball team wasn't on the verge of losing control of its match against Sparta during an exciting third set on Thursday, but a strong finish was going to be welcomed.

After losing the first two sets, the Spartans led the third by as many as six points once and five on three occasions before Vikings battled by for a 29-27 win that completed a sweep at Bernie L. Ferry Field House.

Holmen won the first set 25-18 and the second 25-17 before the hotly contested third.

"That was an awesome comeback," said Holmen coach Sammi Maier, whose team improved to 4-0 overall and 4-0 in a makeshift conference consisting of MVC and Big Rivers Conference teams. "I thought Kassie Mueller made a couple of big defensive plays for us that turned that third set around.

"We were kind of stuck in the mud for a little bit, and they really just jump-started us into the end of the third set."

Sparta (2-1, 2-1), which beat Logan in four sets on Tuesday, held its biggest lead when a Callie Ziebell kill made the score 22-16. Mara Schmidt immediately answered with one of her own to keep the Spartans from pulling away.

Sparta later led 22-22 but made a couple of errors while in possession of the ball to help keep Holmen in it.

Holmen showed plenty of depth and experience in becoming the first team this season to beat Sparta, which, like Holmen, is embarking on a spring season after playing a couple of matches in the fall.

"They have height, and they run a lot out of their middle," Maier said of the Spartans. "They are so scrappy, and that's something you can always expect out of a Sparta team. They are very good at keeping the ball alive, so we had to be ready for anything."

Senior Raegan Boe had a team-high 15 kills, but teammates Schmidt and Sydney Bahr were right there with 11 and 10 more, respectively. Junior Ellie Kline had 32 digs and junior Marissa Pederson 21 assists.

The Vikings took control of the first set with an 11-point run that began with a Sparta service error to get them within 11-10. Schmidt and Jahr dominated at the net during the stretch, which was mainly served by Mueller. A Schmidt kill followed by a Sparta hitting error allowed Holmen to turn its 11-9 deficit into a 20-11 lead.

"I think the girls have a different intensity that they've had the last few years," Maier said. "Especially in that third set, and I haven't seen that in a little bit."

He’s been told his first present when he was born was a fishing pole, perhaps setting the tone. When a kid, he says all he could think about w…

The Holmen High School volleyball team celebrates a point during its 25-18, 25-17, 29-27 victory over Sparta at Bernie L. Ferry Field House on Thursday.

Sophomore Kyla Christnovich attacks at the net for the Holmen High School volleyball team on Thursday. The Vikings remained unbeaten by sweeping Sparta 25-18, 25-17, 29-27 on Thursday.