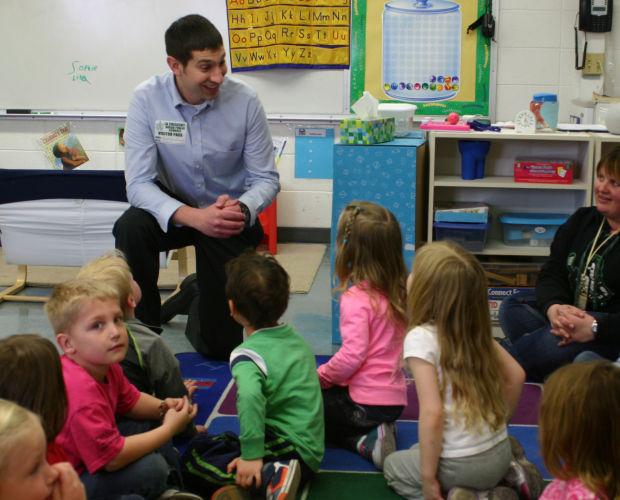 State Sen. Jeremy Miller visits with a group of children in Judy Bissen's early childhood classroom at La Crescent-Hokah Elementary School on April 16. Miller was visiting the district over the legislature's Easter/Passover break, stopping in all three district schools. 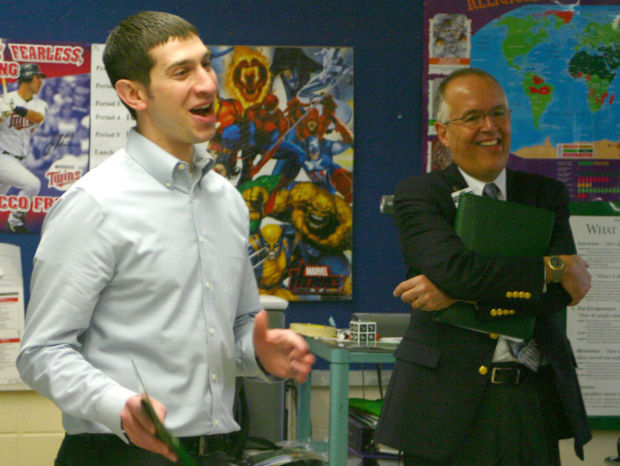 Sen. Jeremy Miller responds when asked if he "makes bank" as a state senator by a student in Jason Shippy's social studies class at La Crescent High School. 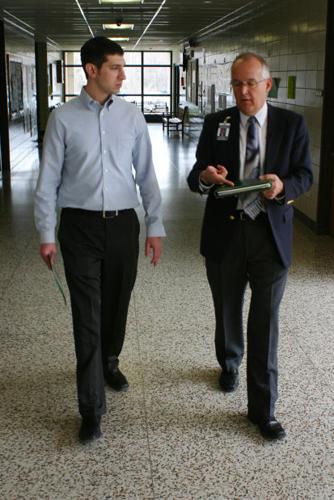 La Crescent-Hokah Superintendent Ron Wilke walks with Sen. Jeremy Miller through the halls of La Crescent High School on April 16. During Miller's tour, he stopped in several classrooms throughout the district and spoke with officials about a number of the district's programs.

It may have been the Easter/Passover break for members of the Minnesota Legislature, but Sen. Jeremy Miller was busy.

Miller, R-Winona, made a swing through Houston County on April 16, stopping at a nursing home in Spring Grove, Caledonia High School and in La Crescent. Locally, Miller met with La Crescent-Hokah Superintendent Ron Wilke and community education director Beth Theede for about 90 minutes, during which time he toured all three school buildings, sat in on several classes and learned about a number of initiatives happening in the district.

“One of the things I like to do during this time is get out and visit folks within the district,” Miller said. “Over the next couple days, I’ll be visiting different places, meeting with constituents, small businesses, nursing homes and school districts.”

Wilke said the senator has been good about visiting schools during his tenure in office, and that afternoon, his goal was to share with Miller some of the programming in place in La Crescent-Hokah. Both he and Theede highlighted three areas, including the district’s mobile computing initiative LancerLearningHD, the redesigned early childhood education program, and the facilities initiatives which involve the city of La Crescent.

“It’s a great opportunity to develop an understanding of what life is like on the ground, in our district and in our classrooms,” Wilke said of Miller’s visit. “It’s exciting to see a state senator engaging our students and to see the tremendous learning and thinking, and the engagement of our students.”

Miller had the opportunity to do that as the group walked the halls of the schools, with Wilke explaining what he’d be seeing at each stop. Making an unscheduled pit stop in the robotics room to begin the tour, Wilke introduced Miller to students Sir Lancer Bots team members Bennett Norris and Ryan Kling, who were working at the time.

“This started with one of those tool chests and a kit,” Wilke said of the program, “and a lot of people enthused about this type of learning. This is STEM on steroids.”

The other visit in the secondary building was to Jason Shippy’s social studies class, where students worked on Google Chromebooks, which were rolled out this year on a limited basis at the high school level as part of LancerLearningHD. That day, the class was reading an article on mass media, and then used a worksheet on a Google form, which would then be submitted and graded electronically.

“You, along with Mr. Shippy, have done some amazing things in being in the forefront to model and move our program forward,” Wilke told the students.

Miller introduced himself, and then took a couple questions from students. One asked why he wanted to be a senator.

Then Miller had the chance to visit a couple primary classrooms, as well as an early childhood group, at the elementary school. In Kay Schafter’s multiage room, students there, too, were engaged on Chromebooks, doing research on animals they were trying to find specific information on.

“They’re learning the research process and ways to use the computers to find good information while learning about science,” Schafer said. “They’re blending a lot of different things.”

Miller then visited with several students who talked about what they were doing. One was looking for facts about frogs, and another was curious about lizards.

“Is anyone looking for sharks,” Miller asked, seeing a hand or two shoot up. “How about lions?”

Wilke asked if all information found on the Internet is reliable.

“Nooooo,” the class responded in unison.

“You usually try to go on resources that are credible,” one student said when asked how to research.

The final stop was in Judy Bissen’s early childhood room, where Miller crouched down on the carpet and talked to kids about what they’re learning. Some poked at his arm to get his attention, while another ran to her locker to show him something she colored. Though there was more that could be highlighted, Miller was excited by what he saw that day.

“I’m very impressed with what our local school districts are doing. Our educators, the staff, they’re doing a wonderful job educating our students and we’re very fortunate to have that here in southeast Minnesota,” he said. “With the work I do at the Capitol, I want to best represent the people from the district I represent, so that’s what I’m doing today – getting feedback, questions and comments, and trying to do everything I can to best represent the people of southeast Minnesota.”

Uniformly that day, Miller said he heard about the importance of funding for education. The father of three young children, he said he has a passion for early childhood learning and is hopeful some additional funding for schools could come out of the current session — which includes fixing some issues that are unfavorable to school districts outside the Twin Cities metro area.

“We’re trying to address some of those issues to make sure our schools in Greater Minnesota receive their fair share of the funding,” he said. “In my opinion, a student is a student whether that student is in La Crescent or in the metro area. Unfortunately, the funding formulas don’t represent that very well.”

Wilke felt the visit was time well spent, allowing Miller to get a look at what’s happening within the walls of the school – and beyond.

“For the senator to experience that up close and personal from our students and our faculty, it puts a face on things. It puts a story behind it,” he said. “I think it better equips him to work to support the needs of all of our students, and truly, our communities.”

State Sen. Jeremy Miller visits with a group of children in Judy Bissen's early childhood classroom at La Crescent-Hokah Elementary School on April 16. Miller was visiting the district over the legislature's Easter/Passover break, stopping in all three district schools.

Sen. Jeremy Miller responds when asked if he "makes bank" as a state senator by a student in Jason Shippy's social studies class at La Crescent High School.

La Crescent-Hokah Superintendent Ron Wilke walks with Sen. Jeremy Miller through the halls of La Crescent High School on April 16. During Miller's tour, he stopped in several classrooms throughout the district and spoke with officials about a number of the district's programs.