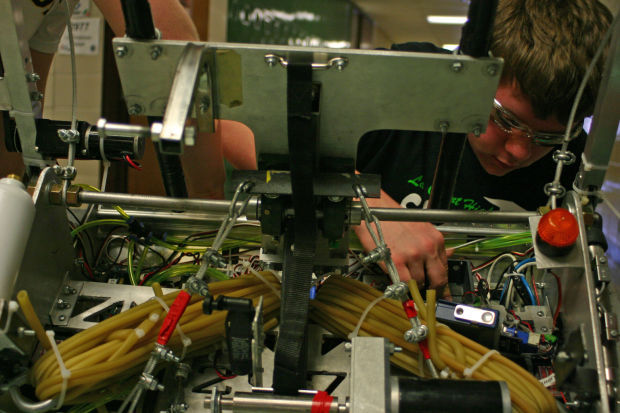 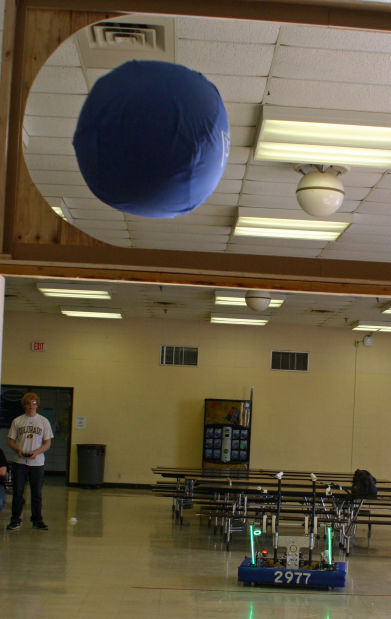 Sir Lancer Bots team member Ryan Kling demonstrates how the robot throws a ball through the goal, which is the objective of this year's game, entitled "Aerial Assist." 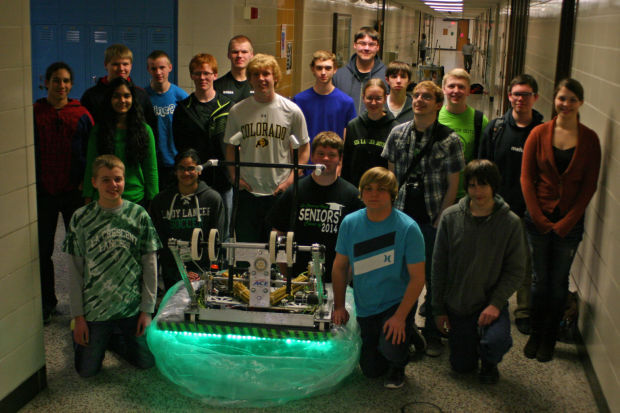 The Sir Lancer Bots pose with their robot, Nexus, during a practice session last week.

This season was different in several respects for the Sir Lancer Bots, La Crescent High School’s robotics team. This year, the team’s sixth, wasn’t met with a mad dash to the finish of the build season with tweaks and adjustments in the final hours. But that doesn’t mean it didn’t encounter challenges, including an important one it’s never dealt with before.

Last Thursday, exactly one week ahead of the first day of competition in the Lake Superior Regional in Duluth, the 21 members of Team 2977 met to iron out the final details of a project they started working on Jan. 4 – the first day of the build season, one that ended six weeks later on Feb. 18.

The mood was light. The team’s robot, which it named Nexus, was wrapped in a plastic bag and nothing more could be done to it to improve its functionality. It had been that way well ahead of the deadline.

“It was a sprint to the finish, except for the last day,” said Ryan Kling, a senior on the team. “The last day was actually very calm. We got a lot of the stuff done before that day and the last day was mostly just giving our drivers practice.”

Just one day ahead of schedule might not seem like a lot, but with 21 sets of eyes looking at how to make one machine better, to come to a conclusion with time to spare isn’t the norm.

“Even just the one day is unusual to be ready that early,” said Geoffrey Bissen, a senior and four-year veteran of the team. “People were a lot more dedicated to staying after the usual time and getting stuff done on time. We set a tentative schedule at the beginning of how long we want everything to take and we worked really hard to meet that.”

“And along with that, I think we encountered fewer problems at the end of the season” as compared to last year,” Kling added.

Like any other season, the Sir Lancer Bots in January learned about this year’s game, selected by FIRST Robotics Competition, that they had to build a robot to play. Entitled “Aerial Assist,” Nexus will join an alliance of two other robots from other competing schools on a 25-by-54 foot field in an attempt to score balls in goals at each end.

For the first 10 seconds, known as an autonomous period, the robot drives itself based on how it’s programmed, scoring as many points as possible in both a low and high goal. For the next two minutes and 20 seconds, the robots are controlled by team drivers, who attempt to scoop up the balls, pass them among alliance members, and fling them over a suspended truss and into the goal. Points are scored based on how much the teams pass the balls, which goals they’re scored in, and if they’re scored in “hot” goals, which award additional points.

“It’s all about ‘coopertition,’” said junior Marina Hafner, referring to a combination of cooperation and competition among teams. “It’s all about passing and catching. It’s about cooperating in our alliances and working with the other two teams to complete an objective.”

And because points are awarded for working with other teams and not just by scoring, cooperation is a key objective to success.

“There are different zones on the field where you’re passing from robot to robot and you get points,” Bissen said. “They’re stressing the teamwork portion of it a lot more this year.”

Though teamwork will be paramount as the team competes this weekend, it was needed throughout the build season for the Sir Lancers Bots, as they took on a challenge Kling, another four-year participant, and others on the team hadn’t seen in other seasons.

“Quite honestly, for me, I was really nervous,” Kling said about the objective. “It was a very, very different game than we’ve encountered before.”

No more was that difference more evident than in the game piece. In past years, their robot was built to manipulate smaller objects like a Frisbee or something the size of a basketball. However this year, the balls Nexus will have to move, though rather light, are as big as the robot itself. The last time game pieces were this big, Hafner said, was in 2008 – a year before the Sir Lancer Bots existed as a competitive team.

That aspect alone was enough to stop the team in its tracks.

“Going into it, there were a lot of mixed feelings because last year, we had a super successful season, and so we were really excited and ready to go and wanted to make as big of a splash as we did last year,” Bissen said. “Then we saw the game animation and the whole team just sat there in their chairs and thought, ‘What?’ because none of us are used to such a big game piece. That was the big hurdle this year.”

But now as they enter competition, the team has a robot it’s confident in. It features a game piece intake system that consists of wheels attached to long arms with motors that pull the ball onto the robot, Hafner said. The arms then flip the ball into a catapult shooting system, which secures it with a gate hook. Those hooks are then released at the proper time, sending the ball airborne.

“Each year has its different challenges, and this year had its own. Each year is difficult in its own way,” Kling said. “This year, it’s relatively easy because the goal is so large compared to the ball.”

Those challenges were evident this year when the team scrimmaged other area schools on Feb. 16. When asked how it performed that afternoon, the teammates gave a laugh.

“The other teams had an opportunity to grow” because of on-site inspectors, Hafner said. “We had a roadblock.”

But it was good to encounter that problem then, rather than in Duluth, Bissen said. In hindsight, it was a good thing.

“Especially for the newer kids on our team, the experience of running through a problem at a stressful event, and then working through them and helping the other teams there was really good for them because they learned one of the FIRST things – ‘coopertition’ and the gracious professionalism,” Bissen said.

New and veterans, the teammates said the entire group is working well together this year, due in large part to a change in approach to team management last year that opened channels of communication. Doing that paid off in the end, as the team played to its best finish ever.

The Sir Lancer Bots’ alliance finished sixth at the Duluth regional, and in a separate Minnesota State High School League-sanctioned event featuring the top 30 teams in the state (out of a total of 181 teams), they finished in second place individually, competing against much larger schools from the Twin Cities with 70-plus members on a team.

For advisor Mark Moulton, who’s led the team since its inaugural year, that success is simply a testament to growth he’s seen in the team.

“It’s one of those things were you learn so much from your mistakes. The things we did our first year, we don’t do anymore,” he said. “What we’re really trying to do this year is make sure our older students are teaching our younger students so as they come up, they’re gaining all the skills the other students have, plus they’re adding to their own repertoire.”

That in itself lends to an effort of establishing a sense of team history, showing students where the program was and what it’s come to be. It represents the larger picture of robotics, as well. With the growing emphasis on STEM careers, a governing body like the MSHSL is trying to make a point of saying that robotics and an education in STEM are important, Moulton said.

“There are now more high school robotics teams in Minnesota than there are hockey teams,” he said. “What they say is, ‘Every student in robotics can go pro.’”

The Sir Lancer Bots, who count several alumni who’ve moved on to STEM careers, are feeling good about their finished product and their chances for replicating last year’s success – as tall a task as it might be.

“We’re kind of jealous of the seniors last year because that was a heck of a note to go out on,” said Bissen, who next year will enter the Marines to work on aircrafts.

“We’ve been looking at other teams online, but I’m really happy with where we are,” added Kling, who will attend the University of Minnesota next year to study mechanical engineering.

Hafner summed it up succinctly.

“We just really want to do well.”

The Sir Lancer Bots are in Duluth this week competing in the Lake Superior Regional, and fans can watch the competition online at http://robotics.nasa.gov/events/livestream/index.php?stream=las_0306-0814

La Crescent is Team 2977,which can be identified by numbers on their robot's bumpers. The schedule and results will be posted on the team's Facebook page, https://www.facebook.com/sirlancerbots.

Sir Lancer Bots team member Ryan Kling demonstrates how the robot throws a ball through the goal, which is the objective of this year's game, entitled "Aerial Assist."

The Sir Lancer Bots pose with their robot, Nexus, during a practice session last week.