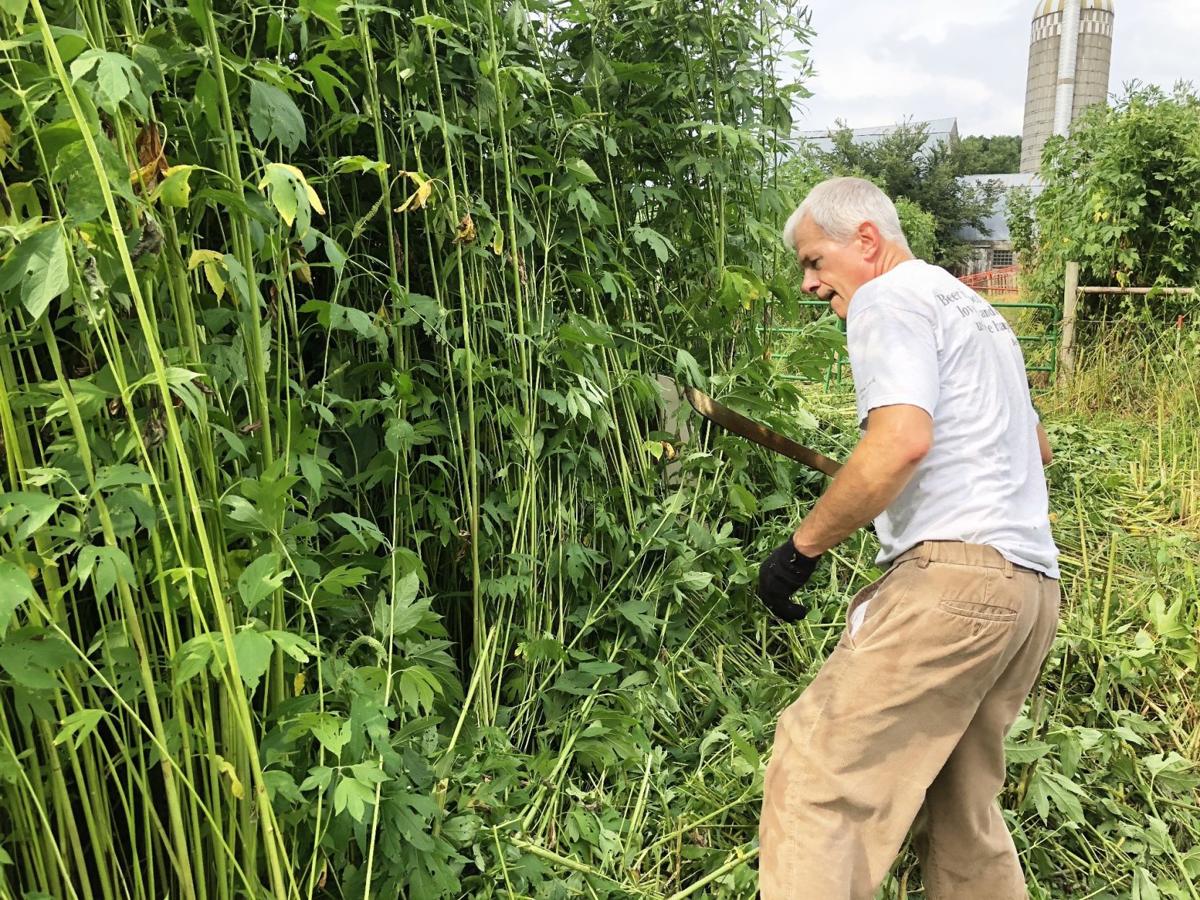 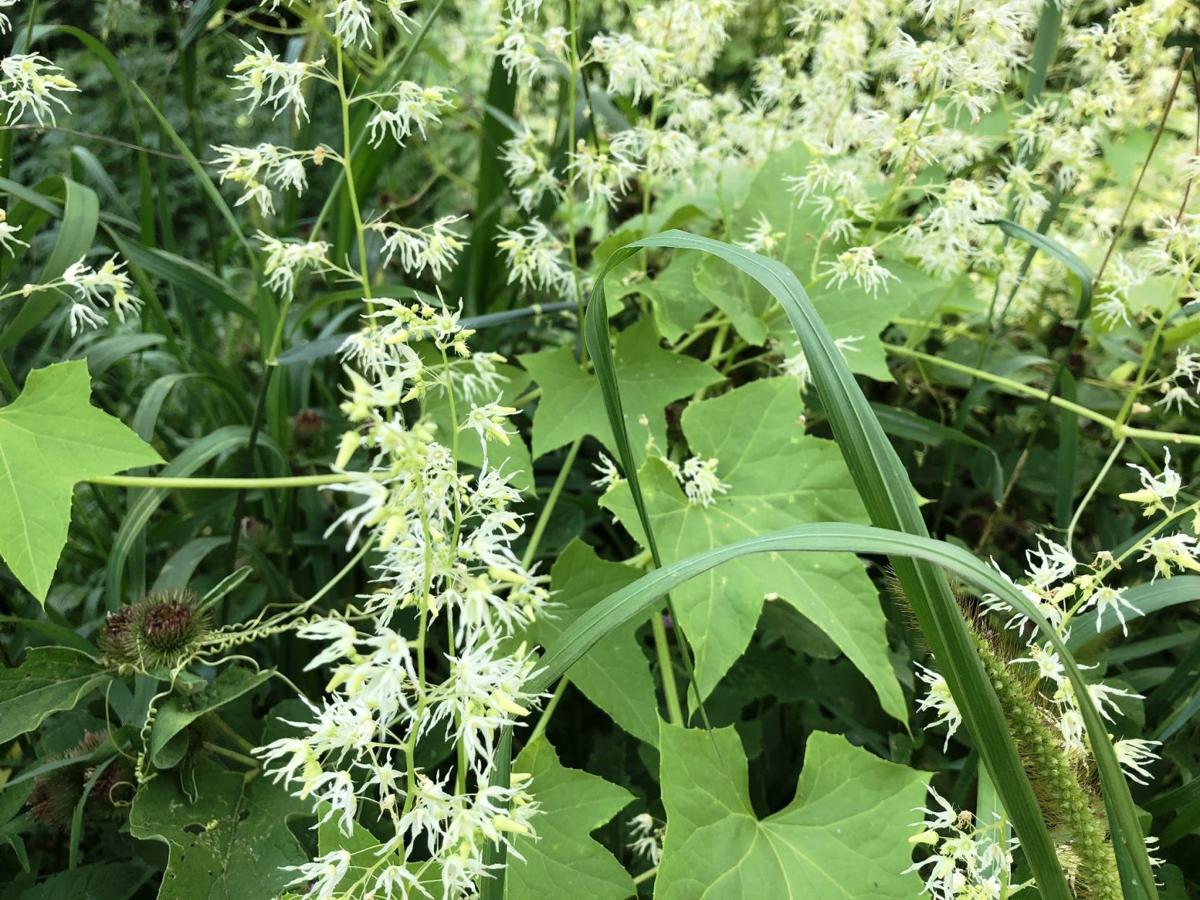 Here's the flowering wild cucumber and its seed pods. 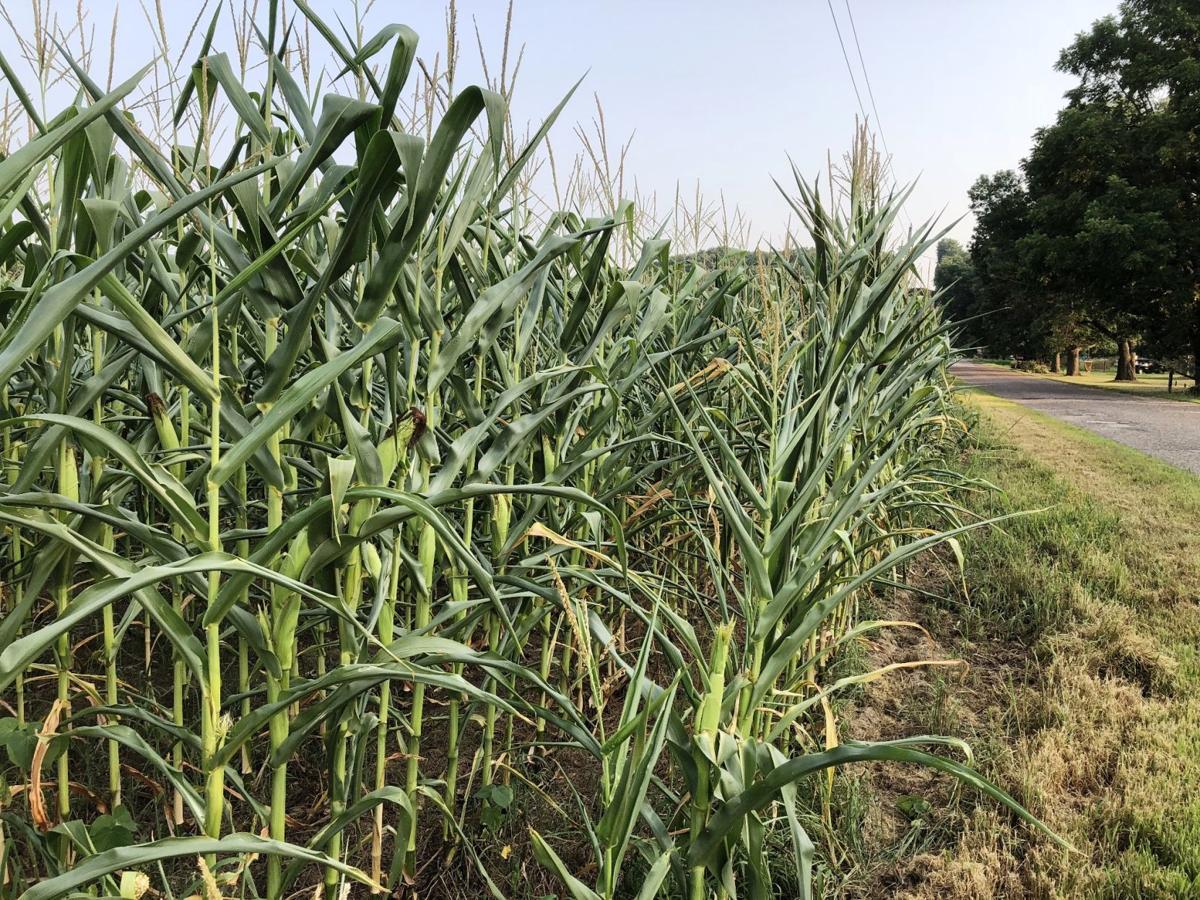 Corn is showing signs of stress because of the dry weather. 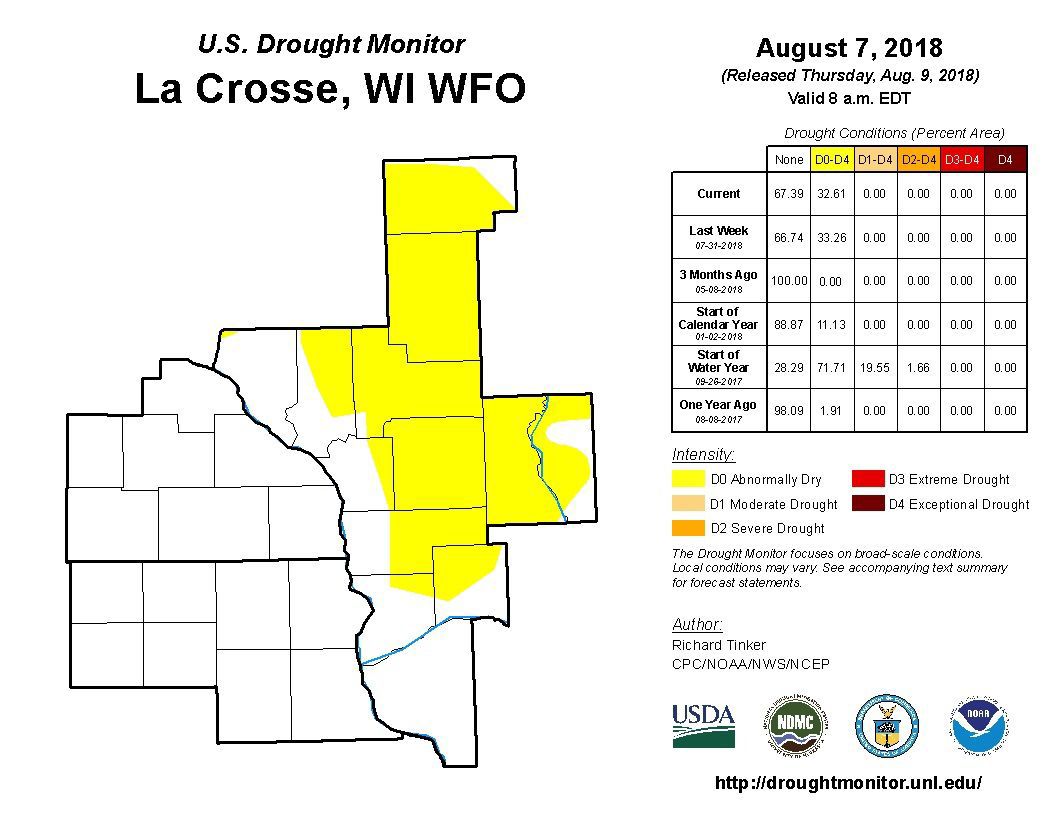 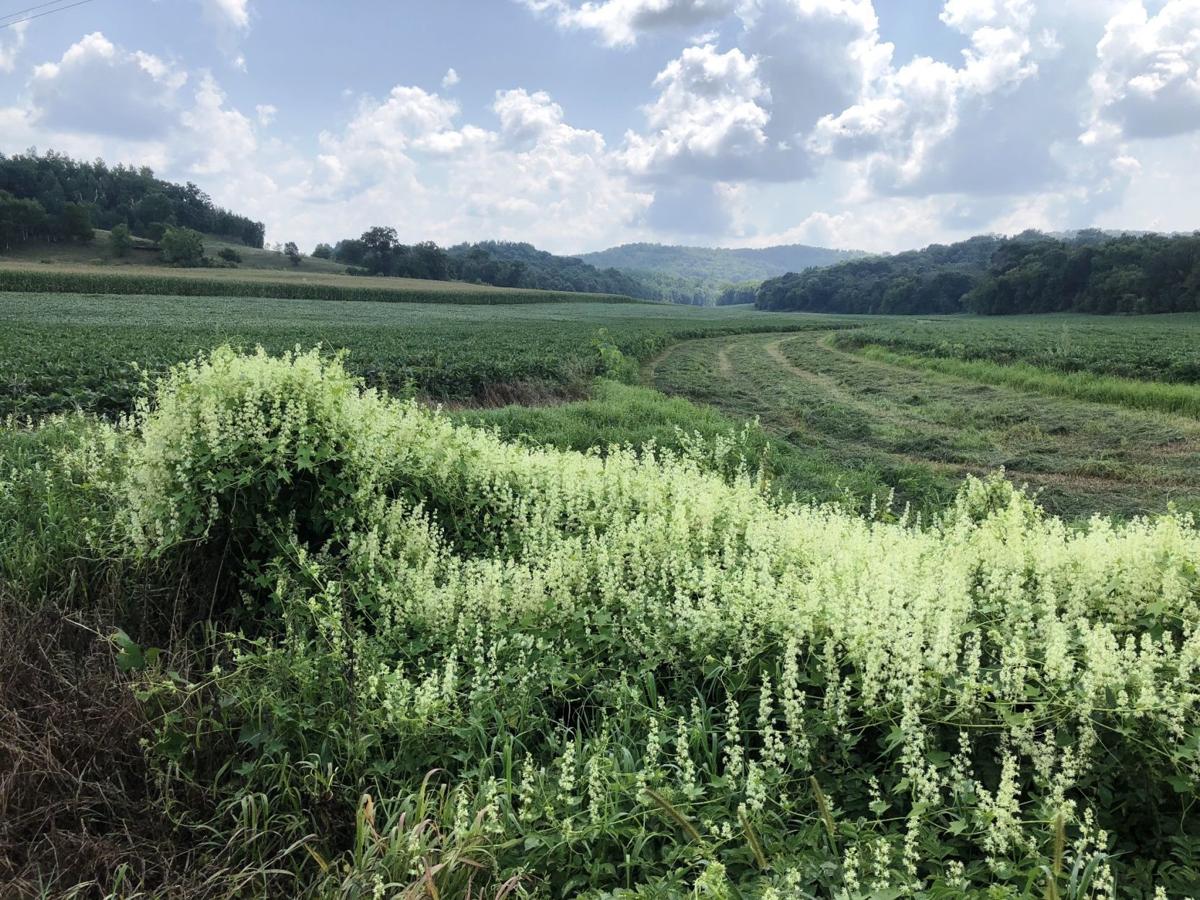 Flowering wild cucumbers are a common scene along roadsides this summer.

There are plenty of invasive species in Wisconsin — and I’m not talking about those who live in the cheesehead state and have the audacity to root for those Nordic invaders from Minnesota or the Ursidae sloth from the flatland.

These are botanical invaders who take over gardens, ditches, yards and if left unchecked would no doubt someday show up even on the frozen tundra in Green Bay’s Lambeau Field.

The Wisconsin Department of Natural Resources calls them terrestrial invasives that “affect the health of our forests, prairies, parks, urban landscapes and more.” The DNR maintains a website that lists a plethora of plants that are regulated — 64 of them with glorious living color photos.

Some of those plants are prohibited anywhere in Wisconsin — like kudzu or giant hogweed. Others like Canada thistle — which is allegedly the next tariff target — purple loosestrife or wild parsnip are restricted because they are already established in the state and have the potential to cause significant environmental harm.

Wild parsnip has become a scourge in western Wisconsin and can be found in great numbers in roadside ditches. I see lots of that burning plant during my travels.

But lately I’ve noticed many trees, shrubs and other weeds along the roadside that are covered with a long vine-like plant with a profusion of yellow, green and white flowers. They seem to be everywhere this year.

I took some photos and put my crack (or is that cracked?) staff of research assistants (it was either me, myself or I armed with a cup of coffee and Google) on the case. Turns out that this is a good year for the Echinocystis lobata, also known as the wild cucumber.

The University of Wisconsin-Extension says the annual plant is not considered invasive because it’s native to most of North America. The fast-growing vines can be 25 to 30 feet long with tendrils that wrap around anything they touch. It’s sort of like the Robert Mueller investigation.

The plant has star-shaped leaves with pointed lobes, similar to a maple tree, and is very noticeable at this time of year when it blooms. The seed pods that gives the plant its name are oval and grow up to two inches long, covered with small sharp spines. It is not edible, however.

Although it’s a weed, the plant can be cultivated and is great for cover along a fence or arbor. The pods must be gathered and bagged before drying because they will burst open and expel their seeds. It’s a botanical version of “Invasion of the Body Snatchers.”

Other than being prolific, apparently there’s no ecological damage caused by wild cucumber. And they’re easy to uproot when they’re small. It’s a shame that we can’t crossbreed it with some wild dill and make them edible. I’d be all for roadside pickles.

Speaking of weeds, I was a killer in my battle with some giant ragweed. Last week I told you that I needed to clear some of the weeds in order to build a corral area for my cattle, which need treatment for pink eye. Armed with a machete, I cut down most of the patch. I felt like I was in some sort of jungle and the hot and steamy weather matched. Thankfully there were no poisonous snakes or sounds of chattering monkeys.

Work on the corral fence is nearly complete and the cows have already moved in to chew on the ragweed leaves. Next up is assessment and treatment of the cows. My vet told me to forget about the idea of tranquilizer guns, saying he’s only had one farmer in 40-plus years use them. I will need a way to squeeze the cows into a chute.

And we still need some rain. My wish to break the dry spell by writing about it last week didn’t work save for a brief shower that barely settled the dust. Some cornfields are showing signs of stress.

Welcome to the club.

Here's the flowering wild cucumber and its seed pods.

Corn is showing signs of stress because of the dry weather.

Flowering wild cucumbers are a common scene along roadsides this summer.