Bob was born Oct. 14, 1929, in Chicago, to Roy and Leona (Srenaski) Olson. He graduated from Bowen High School in 1947. While attending University of Illinois-Chicago, he worked for Kraft Foods and obtained his Class B license in interstate commerce law. He joined the U.S. Army Reserves, earning the title of 2nd Lieutenant.

He was united in marriage to Nancy Watson June 14, 1952, in Milwaukee. They lived in Gary, Ind., while he managed the truck terminal for Britton Motors in South Chicago, until 1957, when they pulled up their city stakes, three little boys and began the challenging life as dairy farmers in Taylor. Bob’s wishes to remain in the farmhouse were achieved to his final day.

Robert was a well-known figure for many organizations in the Taylor and Jackson County areas. He served as both Cub Scout and Boy Scout pack leader, Taylor Parish Church president, as well as Committee Member of ELCA Synod Assembly. He was town of Curran Chairman, Chairman of the Jackson County Board of Supervisors, member of the Black River Memorial Hospital Board of Directors, Jackson County NFO President, director of the Wisconsin Ayrshire Association, director of the Farmer’s Co-op Oil Company in Hixton and a member of Farm Bureau and Farmers Union. He received the Taylor FFA Alumni Outstanding Agriculturist Award. Greatly cherished by Bob and Nancy, they were charter members of the Sanctuary Singers.

In addition to his parents, Robert was preceded in death by his wife, Nancy, Sept. 24, 2016; an infant son, Mark Olson; an infant granddaughter, Amy Olson; and a sister, Lorraine Brozynski.

Memorial services will be held at 11 a.m. Wednesday, Aug. 22, in the Upper Beaver Creek Lutheran Church in rural Taylor. Pastor Jeff Forbes will officiate. Military rites will be conducted by the Hanson-Lien American Legion Post #368. Lunch in the church basement to follow.

Interment for both Bob and Nancy will take place at Zion Lutheran Church cemetery in Blair.

Visitation will be from 4 to 7 p.m. Tuesday, Aug. 21, in the Jack Funeral Home in Blair and also one hour prior to the service Wednesday at the church.

Memorials may be designated to the Upper Beaver Creek Lutheran Church, the Jackson County Interfaith Caregivers or the Grand View Care Center.

Bob and Nancy…Together forever in harmony. 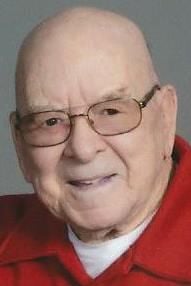