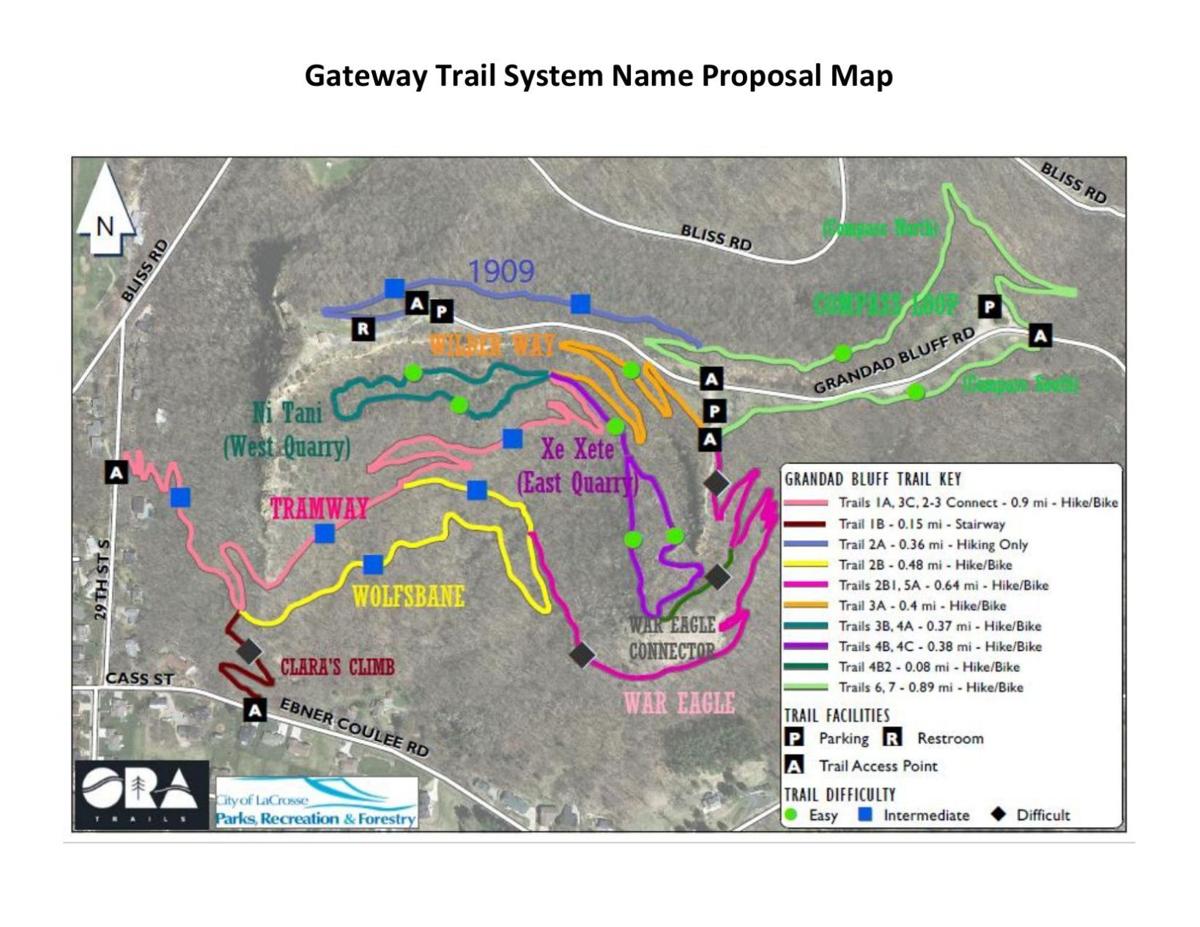 The Grandad Bluff trails have an official set of names, after the Board of Park Commissioners approved them Thursday night, and they pay tribute to La Crosse’s unique history.

The names for each trail in the now-named “Gateway Trail System” were crafted by a board of citizens in the community leading up to the opening of the trails just last week, as well as a survey that went out to the public.

“We used a group of community members, various individuals and families to generate a list of names for the potential trails that were put up on the bluffs,” said Jed Olson with Outdoor Recreation Alliance.

“So it wasn’t just a map,” said Robbie Young of the park commission, “but a community-involved naming process.”

Two other trail segments are named “War Eagle,” a steamboat that burned and sunk at the mouth of the Black River in 1870 and killed five people, which still lies at the bottom of the river to this day.

The trail project is now finished and open to the public, with a little over five miles of trails and 10 segments, offering both multi-use, hike and bike only segments.

On new trails, officials caution to be aware of dampness, and to turn back if your shoes or bike treads leave tracks to protect the trail.

As the community looks for safe ways to celebrate Halloween this year amidst COVID-19, La Crosse and Onalaska partners have launched a free, d…

Since the start of October, Monroe County has seen a significant increase in COVID-19 cases, hospitalizations and deaths.

The Wisconsin Department of Transportation (WisDOT) is seeking public input on proposed improvements to the US 14/61, WIS 27/82 and County T i…

A Westby woman was injured in a single-vehicle rollover Monday, Oct. 26, at about 6 a.m. on County Road SS in the town of Viroqua.

Criminal complaints have been filed against three people after police conducted a controlled drug buy in La Crosse.

Onalaska High School Students of the Month for October

Here are the Onalaska High School October Students of the Month.

Officials are planning for potential traffic delays during this weekend’s drive-thru haunted house at Pettibone Park.

Sheriff John Spears reports the following ongoing activities for the year and narrative excerpts from the week ending Oct. 19.