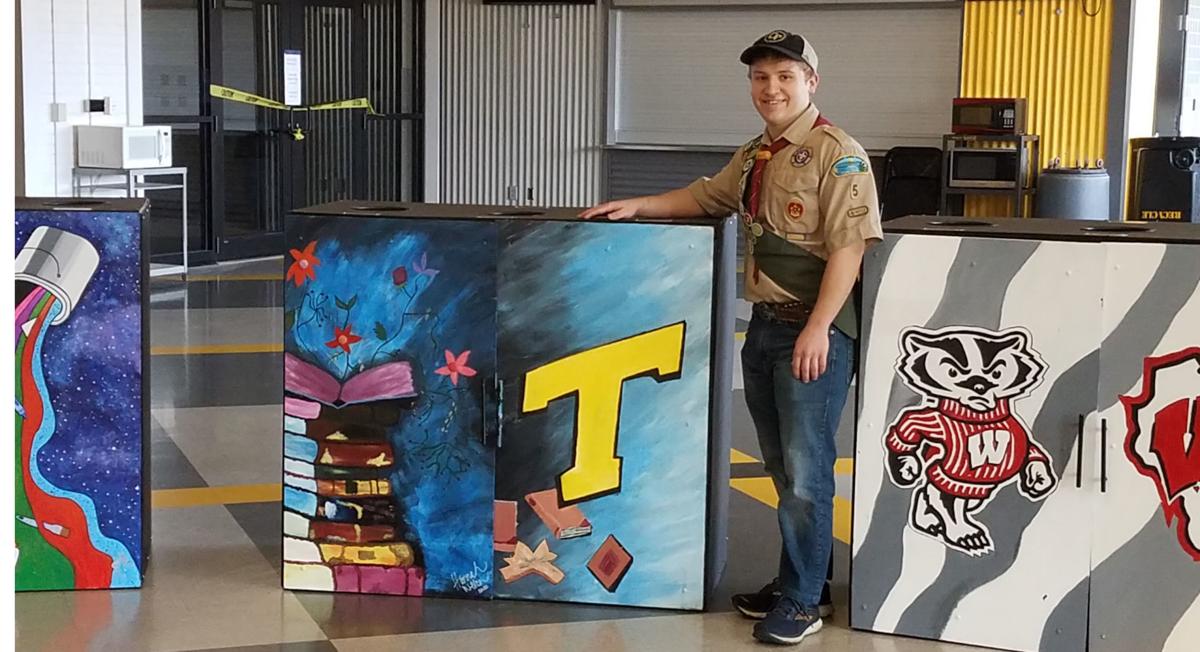 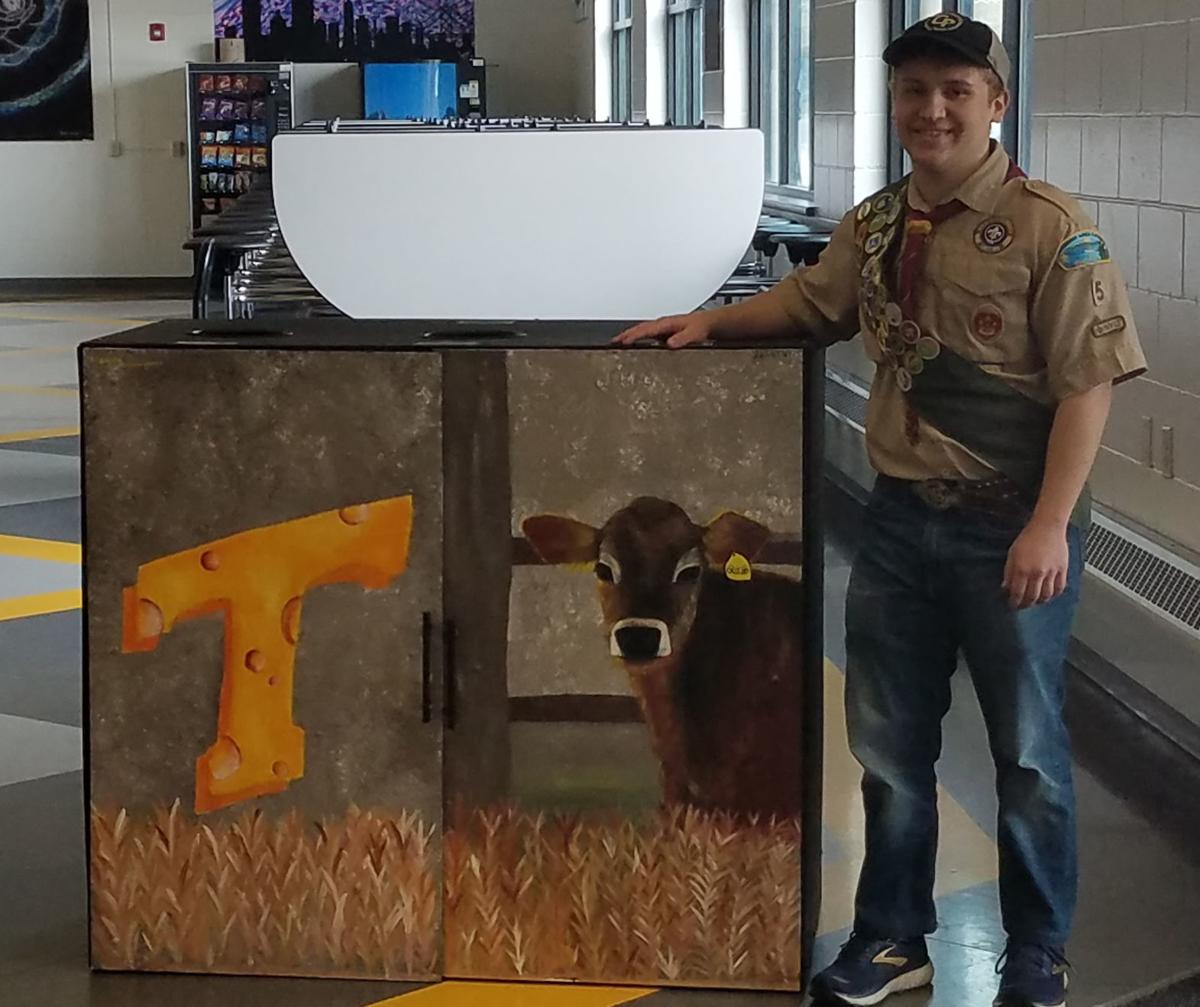 A bin with a cow will be placed in the technical education area. 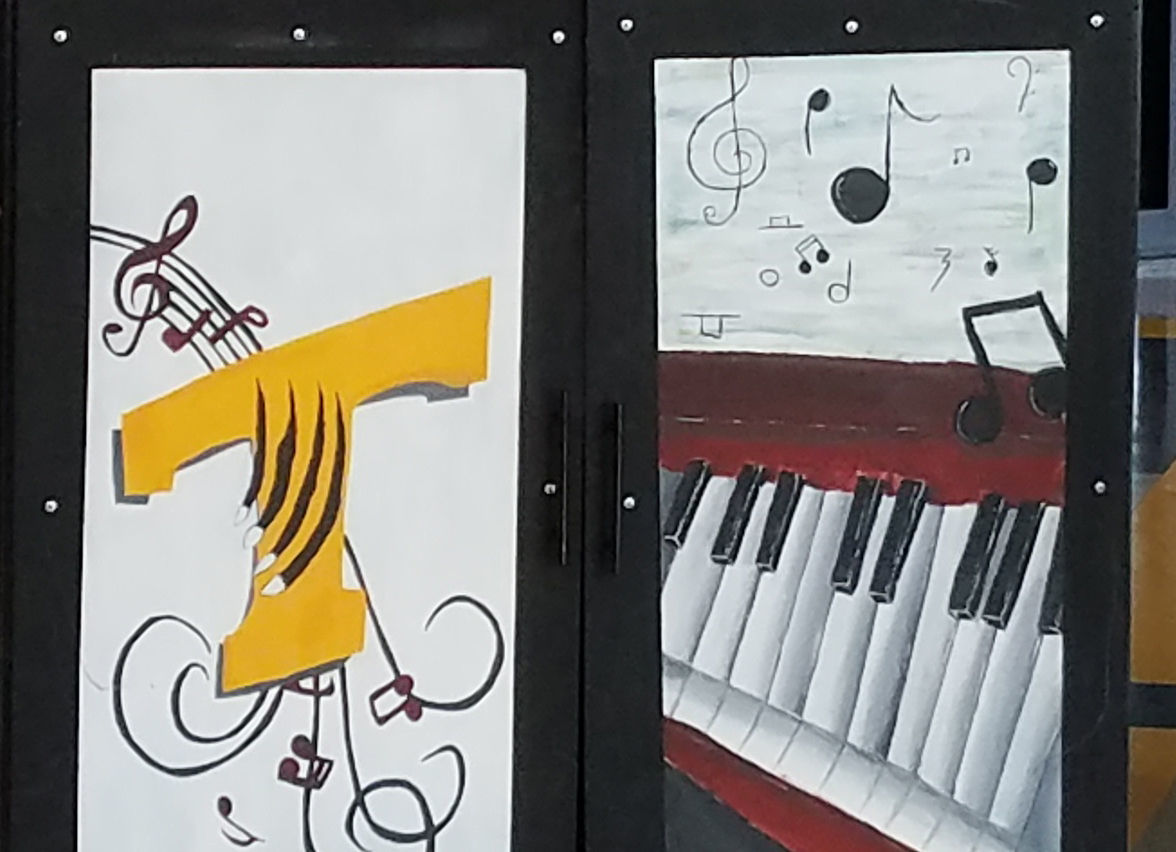 A bin to be placed near the music/theater area.

Sam Burbach’s Eagle Scout project didn’t get finished before the unexpected termination of the 2019-20 school year.

But his work will be impossible to miss when classes resume.

Burbach, a senior, worked on them for a year and was prepared to deliver them two months before school ended, but the COVID-19 pandemic triggered the closure of all public and private schools in Wisconsin March 18.

He is confident the bins will fill a need when the high school reopens.

“There isn’t a whole of recycling going on there,” Burbach said. “There’s nothing in the hallways except for a few plastic-only containers.”

An important part of the project was making the bins visible and attractive, and that’s where the high school’s art department stepped up. The bins feature logos from Tomah High School, the Wisconsin Badgers and other colorful images.

“The art students who painted the bins did a great job,” he said. “There’s only so much wall space in the school, and this gives them a chance to show their art in a different manner.”

“They’re dispersed all over the building,” Stutzman said. “They’re designed so it’s hard not to know what they’re for. I expect it will be a pretty successful campaign.”

Burbach said the artwork will draw eyeballs and, hopefully, recyclables.

“Students are environmentally aware,” he said. “When something like this is available, they’ll use those options.”

The bins are framed with wood planks and lined with HDP paneling. Burbach said the material is “ideal for a building like this because it’s water-resistant and odor-resistant.” There will be separate bins for paper and plastic.

“I did a little research and talked to the people at Modern Disposal,” Burbach said. “It’s less work for their people down the line.”

Burbach, and son of Jonathon and Bridget Burbach, has been a Boy Scout since first grade. He said scouting has been a valuable part of his life.

“It has given me a lot of leadership skills,” he said. “It’s not all about tying knots and camping. It’s about preparing you for life.”

A 33-year-old Tomah man was arrested May 25 for eighth-offense drunken driving after leading Tomah police on a high-speed chase.

June 11 is set as opening day for the Tomah Aquatic Center.

The number of COVID-19 cases in Monroe County had reached 18.

Tomah school budget stable in 2020-21, uncertainties after that

The Tomah Area School District’s 2020-21 budget appears stable, but the outlook beyond that is very uncertain. The Tomah School Board heard th…

The Wisconsin State Fair is cancelled due to the COVID-19 pandemic, but the fate of the Monroe County Fair is still to be determined.

A bin with a cow will be placed in the technical education area.

A bin to be placed near the music/theater area.