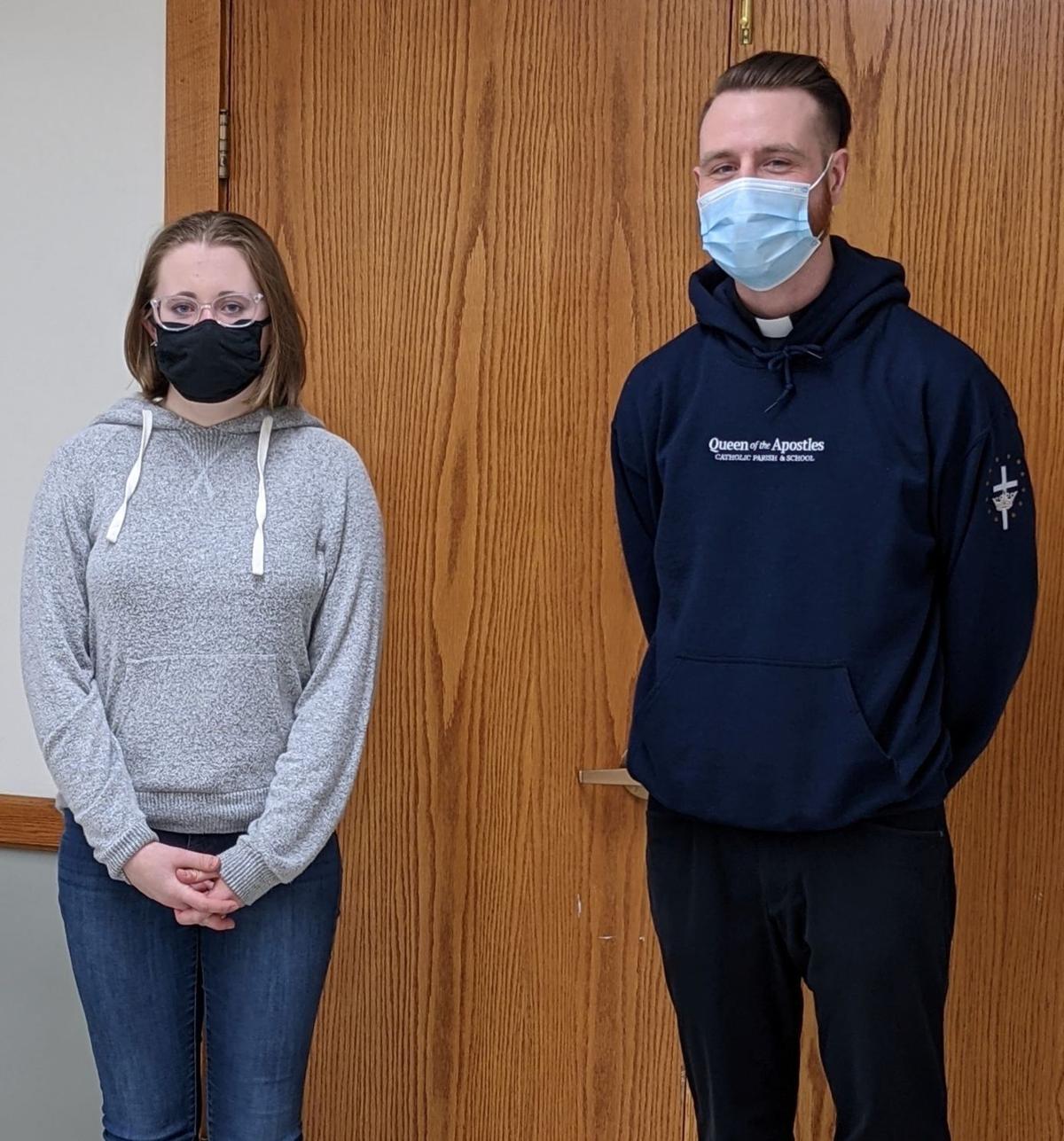 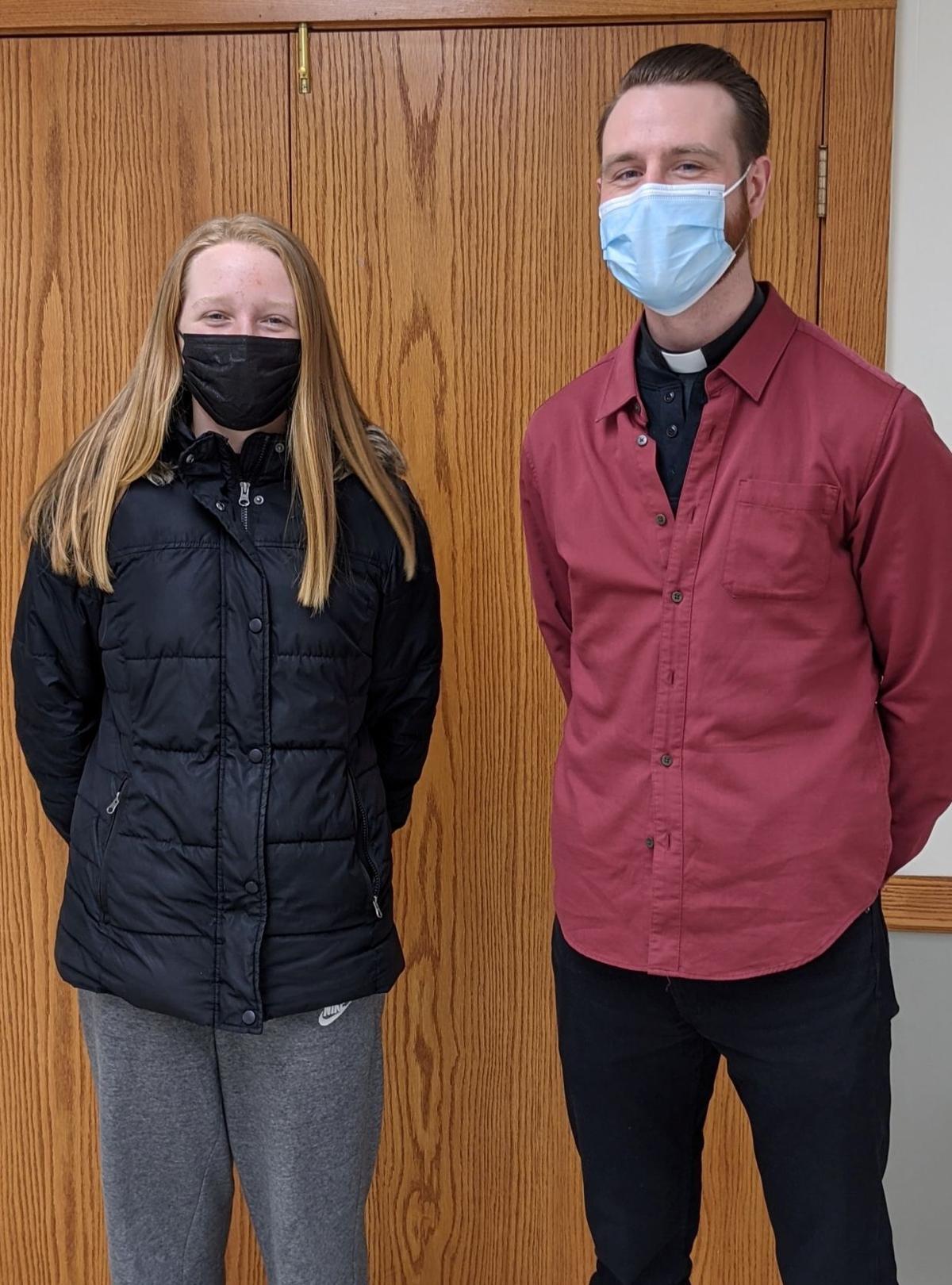 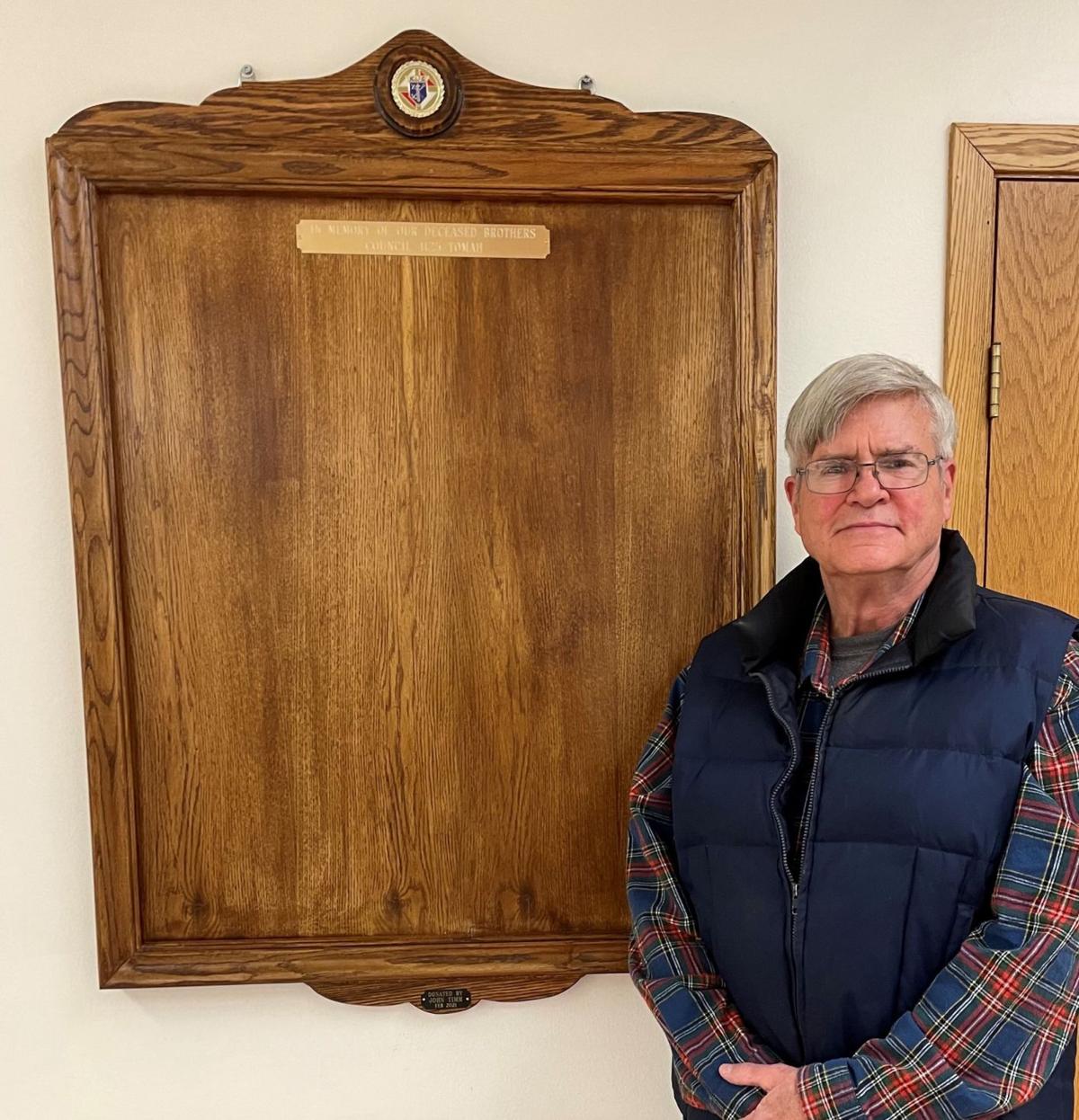 John Timm constructed and donated a new memorial plaque displayed at the KC hall on Juneau Street. The former plaque posted the names of 209 Knights and seven priests. The memorial exhibits wood workmanship and is fitted with brass plate and KC emblem.

March 2021 has been a busy month for the Tomah Knights of Columbus Council 4125 as they continued their mission of community service and charitable contributions and living up to the four pillars of the core beliefs of the Knights of Columbus: charity, unity, fraternity and patriotism.

Catholic citizenship essayTwo grade 10 Tomah High School students were state-level winners in the annual Catholic citizenship essay contest, sponsored by the Supreme and Wisconsin State Councils of the Knights of Columbus. First place was earned by Jaiden Skofronick and second place went to Brin Neumann. Students were asked to write on the topic: “Discuss How Trusting in God During a Difficult Time Has Helped You or Someone You Know Find the Strength and Hope to Endure It.” The first-Pplace winning essays go on to international competition in New Haven, Connecticut. Winning essays are on display at the Knights’ annual state convention, held this year at Lake Geneva on May 1.

Knowledge contestThe annual KC knowledge contest is traditionally held in the last week in January. But like so many events, COVID-19 has dictated a change in plans. Queen of the Apostles school ran the contest in the first week of February, but the contest at Tomah Middle School was delayed. The knowledge contest is open to all children in grades five through eight, and the Knights thank middle school principal Michael Chapes for shepherding the event. The first-place winners are:

Congratulations to the six first-place winners. We pray that the Knowledge Contest will resume its normal schedule in 2022.

The results of the Culture of Life Contest have just been released, and Council 4125 has a third-place winner in Jerry Skofronick at the Diocesan (Regional) level. The contest is open to all students grade 7-12 in Wisconsin. The topic this year was: “Bullying and Social Marginalization Often Lead to Depression.” Skofronick wrote, “The value of human life is the same as it was thousands of years ago, and the difference in time does not change its value. We should always be looking out for signs of bullying and other mistreatment of people.”

Council 4125 holds fund raising events and gives back to the community. The Tomah Fire Department received $50 to fund a campaign for fire safety and education aimed at children.

A portion of the funds raised and dues paid are returned to our council. That amounted to nearly $600 of state charity money with $200 going to the Tomah food pantry, $200 to the Camp Douglas Food Pantry and $200 to Catholic Charities to help unwed mothers.

Sir Knight Jim Weinzatl, executive director of the Tomah Area Historical Society, reports that the March 20 drive-by chili supper was a big success. Chili was prepared in and distributed at the K.C. Hall in Tomah. Net proceeds were over $500 and comparable to last year’s sit-down dinner. Nine volunteers from the Museum were workers at the KC hall. Feedback from the chili customers was very favorable. Plans are to continue this annual event again next year in January. Mr. Weinzatl said, “The Tomah Area Historical Society wishes to thank the Knights for the use of the hall and appreciate the continuing goodwill that they show to the Tomah community.”

The Fourth Degree is the highest degree in the Knights of Columbus. Local units are called assemblies and are named in honor of a saint or prominent clergy member. Formed in 1972, Tomah is home to the Father Francis A. Heindl Assembly 1902 with about 130 members. Fr. Francis Heindl (1928-1986) was the parish priest at one time at St. Mary’s.

While the first three degrees are based on the principles of charity, unity and fraternity, the Fourth Degree is known as the Patriotic Degree and is a reminder of our duty to God and country. In addition to many charity activities, the Fourth Degree provides an Honor Guard for visiting bishops, confirmations, funerals, the Silver Rose Ceremony, dedications and award functions. Sir Knight Phil Schreiner has been the commander of the Tomah Honor Guard for many years.

Tomah Assembly 1902 holds a dinner/meeting on the third Monday of each month. The leader of each assembly is known as the Faithful Navigator, and the post is currently held by Frank DiBenedetto.

The Annual KC Tootsie Roll Drive will be held this year on the weekend of May 14-16. Be looking for the yellow-vested KC members soliciting your donation at Walmart and Molter’s from 8 a.m. to 4 p.m. Proceeds are split three ways between Handishop Industries, Lion’s Summer Camp for disadvantaged youth and Special Olympics. Last year, each of the above received about $1,100.

Numerous Knights of Columbus members will be volunteering to aid in the interior restoration of St. Michael’s Indian Creek Catholic Church. The work will commence after Easter.

The Tomah Knights will honor Medallion Awardee Don Tralmer following the April 18 10:30 a.m. Mass. The Medallion Award is the highest honor a Wisconsin KC member can earn and is equivalent to a lifetime achievement award. The PCCW ladies will host a reception following the ceremony.

After delivering more than 2,500 babies over her career, Kathy Kett is taking her experiences and expertise to Africa to help expecting moms a…

Tips for controlling crabgrass in the lawn

This spring is about 2½ weeks ahead of normal based on daily temperatures and growing degree day accumulation. We just entered the window to a…

The following local students have been named to the University of Wisconsin-La Crosse Dean’s List:

John Timm constructed and donated a new memorial plaque displayed at the KC hall on Juneau Street. The former plaque posted the names of 209 Knights and seven priests. The memorial exhibits wood workmanship and is fitted with brass plate and KC emblem.