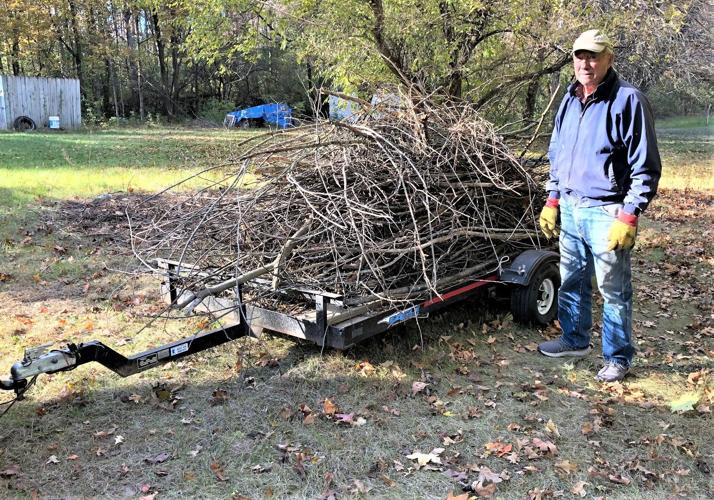 Larry Dechant, a 1955 founding member of Tomah Council 4125, removed brush and debris from a neighbor’s property. 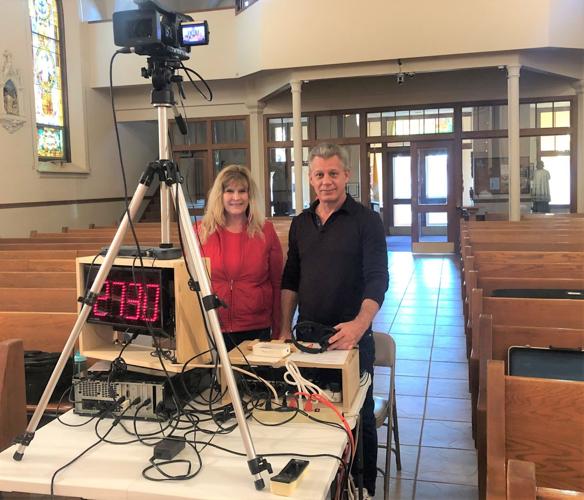 La Crosse Digital Video taped four television Masses at St. Mary’s Church, Queen of the Apostles Parish, in Tomah, to be broadcast each of the four Sundays of Advent. The Masses were celebrated by Monsignor David Kunz and Father McCarty. 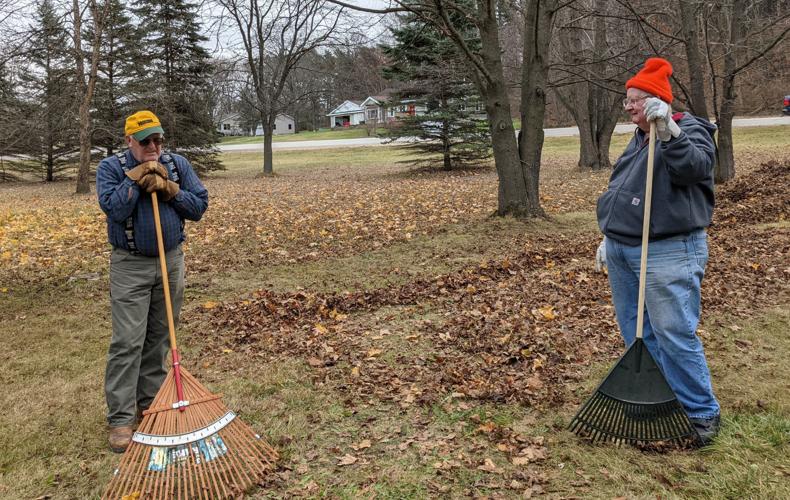 Mike Arttus and Fred LeSavage hard at work raking the lawn of an elderly Tomah resident. The Knights are called to help others in need.

November 2021 has been a busy month for the Tomah Knights of Columbus Council 4125 as its continues its mission of community service and charitable contributions and living up to the four pillars of the core beliefs of the Knights of Columbus: charity, unity, fraternity and patriotism.

of the MonthThe Knight of the Month for December 2021 is Rick Welch. Brother Rick has been a member of the Knights of Columbus for almost 40 years. He is very active in Queen of the Apostles Parish. Rick also manages the baskets for the elderly at Christmas, collecting and delivering items for residents at Rolling Hills.

The Family of the Month for December 2021 is Mike and Mary MacLaren. Mike retired as a colonel from the U.S. Army then spent over a decade as the director of the Wisconsin Challenge Academy. Mary is retired from teaching, including many years as the kindergarten teacher at St. Mary’s (now Queen of the Apostles) School. Mike and Mary are very active at Queen of the Apostles Parish. Mike is a regular at the early morning men’s group, serves on the Catholic Education Committee and frequently helps with other efforts at the parish and school. Mary teaches fourth grade religious education and volunteers in the school.

and lawn cleanupSeveral Knights came together on Nov. 17 to rake the huge lawn of a 100-year-old lady living in rural Tomah. Grand Knight Jon Burbach, Fred Le Savage, Larry Dechant, Shirley Dechant, Dave Dechant, Sara Dechant, Gary Dechant and Mike Arttus got the job done in good time. Charity is one of the pillars of the Knights.

DonationsThe Tomah Knights hold several fundraisers throughout the year and contribute the money to worthy causes. Donations were made to the Neighbor for Neighbor Food Pantry in Tomah, the Dominican Sisters of Mary in Michigan, the Diocese of La Crosse for TV Masses, Family Life for the Diocese of La Crosse, Seminarian Scholarships and the annual Diocesan Appeal. A special appropriation was given to Catholic Charities, and the money designated for winter clothing for Afghan children at Fort McCoy.

State charity raffleThe annual KC State Council Charity Raffle is under way. First prize is a 2022 Ford F150 XLT SuperCab or $50,000. Second prize is a Harley-Davison Motorcycle or $25,000. There are 98 (third through 100th prizes) of $500 each. Proceeds from this raffle allow the state to pay out a half million dollars for charity work. Forty percent of the gross sales are returned to the councils to help local victims of accident, illness and fire. The $5 tickets can be purchased from any KC member or contact Brother Tom Baumgarten, the chair of the state raffle, at 608-372-5614.

Television MassesSt. Mary’s Church, Queen of the Apostles Parish in Tomah, was the site for the taping of four television Masses on Monday, Nov. 8 by La Crosse Digital Video. TV Masses are broadcast on eight different channels within the Diocese on Sunday mornings and Holy Days.

Knights of Columbus members attended and Sir Knight Fred LeSavage did one of the readings. Two Masses were celebrated by Father McCarty and two by Monsignor David Kunz. The four TV Masses are being broadcast on each of the four Sundays of Advent at 9:30 am.

Packers ticket raffleTomah Council 4125 conducted popular Packers Ticket Raffle for two seats on the Packer 40-yard line. It was the Packers vs. Bears game at Lambeau Field, Green Bay on Dec. 12. The drawing was Dec. 6.

Family PromiseThe Queen of the Apostles Parish is one of a number of area church groups that host Family Promise, a national nonprofit organization. Family Promise primarily serves families with children who are homeless or at risk of homelessness with the mission of “helping homeless and low-income families achieve sustainable independence through a community-based response.” The KC Hall in Tomah will host families for four weeks in 2022: Feb. 13-20, May 15-22, Aug. 14-21, and Nov. 6-13.

and bingoTomah Council 4125 sponsors the popular spaghetti supper and bingo on the first Saturday of every month. Brother Knight Doug Semrau chairs this event. The Spaghetti Supper is served from 5-6:30 p.m. For only $6, diners receive a generous portion of spaghetti with garlic bread and a beverage. Desserts are also available. Bingo begins at 7:00 p.m., and 21 games of bingo are played. You can play bingo all night for as little as $1 for a chance to win cash prizes. There is a 50/50 raffle.

for the elderlySir Knight Rick Welch coordinates this program for the Tomah KCs. Baskets are put out at several area churches, including St. Mary’s in Tomah, St. John the Baptist in Wilton, St. Joseph in Kendall, Sacred Heart in Cashton and St. Patrick’s in Sparta. A basket is also at these Sparta locations: Walgreen’s Drug Store, Sparta Pharmacy, and Theisen’s. Additional locations include Dollar Tree in Tomah and Hansen’s IGA in Cashton.

Items that can be donated are: lotions, colognes, socks, slippers, large print reading material, playing cards, puzzles, stationery, stamps, and individually packaged candies. Mr. Welch will deliver the baskets to Rolling Hills in Sparta several days before Christmas. The program directors distribute the donated items to the residents based on need.

A Democrat has entered the race for the 96th state Assembly District.

Monroe County urged to mask up

Monroe County is one of seven in Wisconsin that have reached high COVID-19 levels, meaning residents should wear masks in public indoor settin…

Eleven people attended a Safe Sitter class May 13 at Tomah Health, which is one of three being held at the hospital this year.

Several construction and maintenance projects to improve the roadways at Fort McCoy began in early May, according to the Fort McCoy Directorat…

QUESTION: Why are the commercials louder than the regular programs on television?

QUESTION: How old is mankind?

Larry Dechant, a 1955 founding member of Tomah Council 4125, removed brush and debris from a neighbor’s property.

La Crosse Digital Video taped four television Masses at St. Mary’s Church, Queen of the Apostles Parish, in Tomah, to be broadcast each of the four Sundays of Advent. The Masses were celebrated by Monsignor David Kunz and Father McCarty.

Mike Arttus and Fred LeSavage hard at work raking the lawn of an elderly Tomah resident. The Knights are called to help others in need.