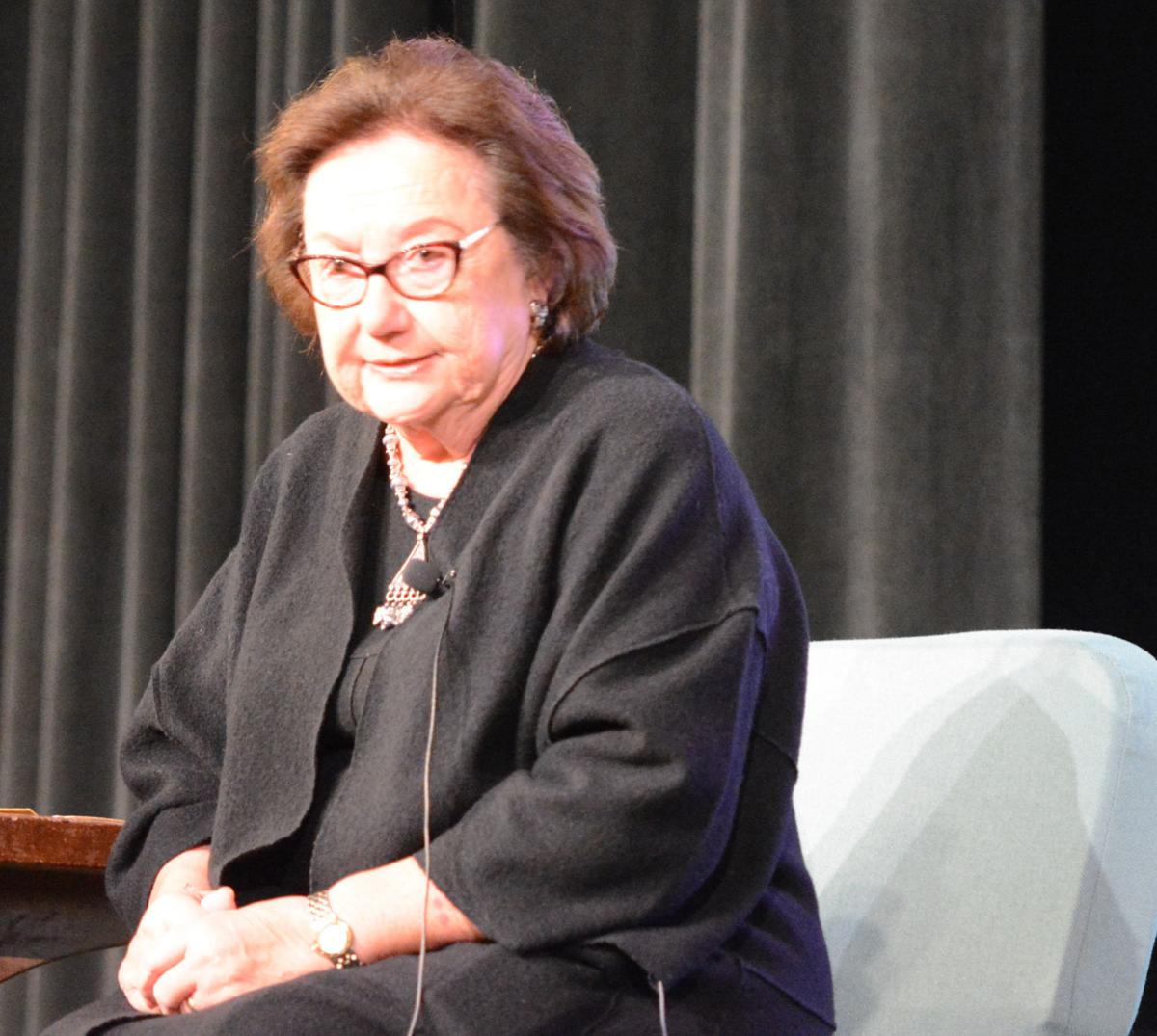 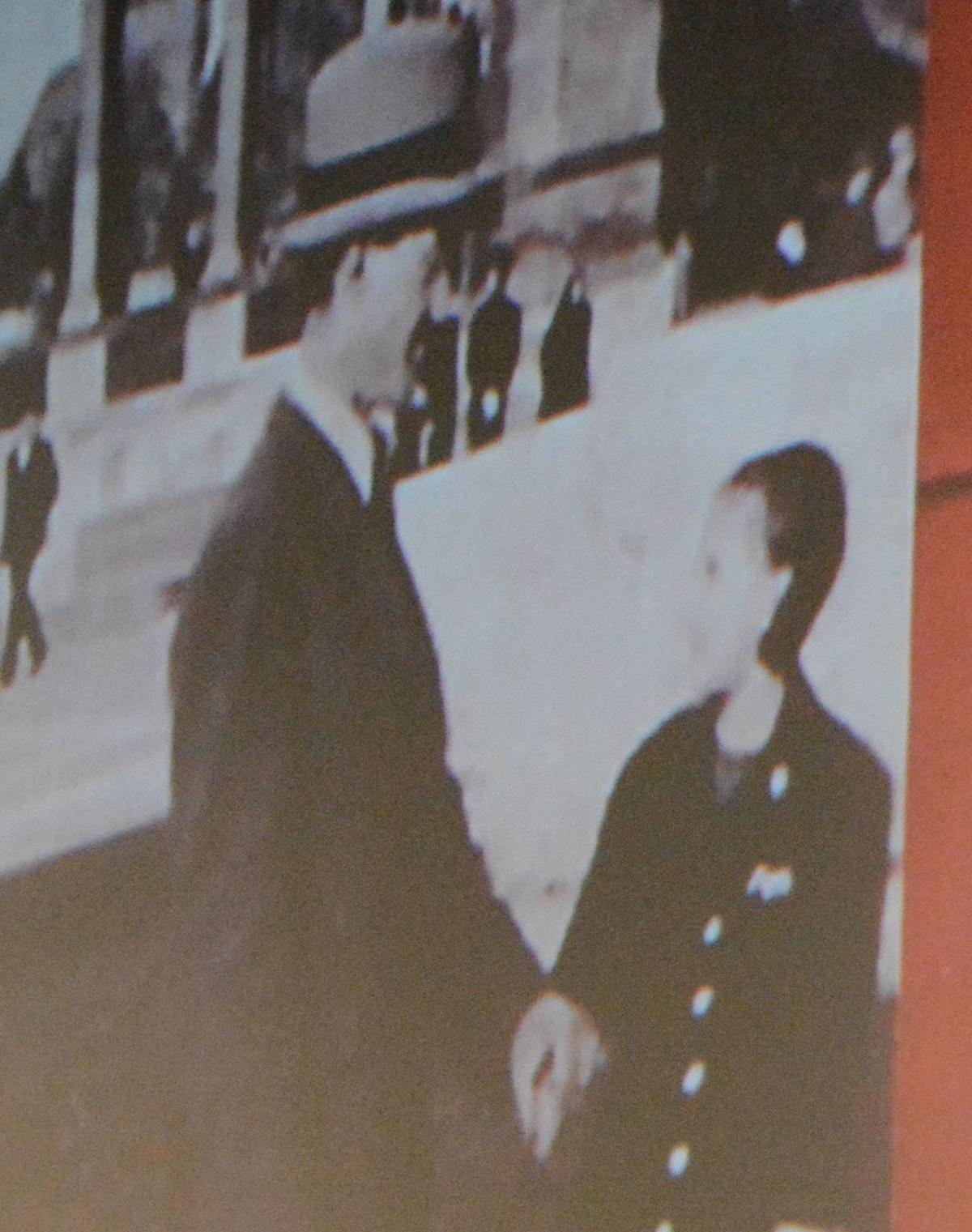 The last picture of Eva and her father before was he taken to a forced labor camp. 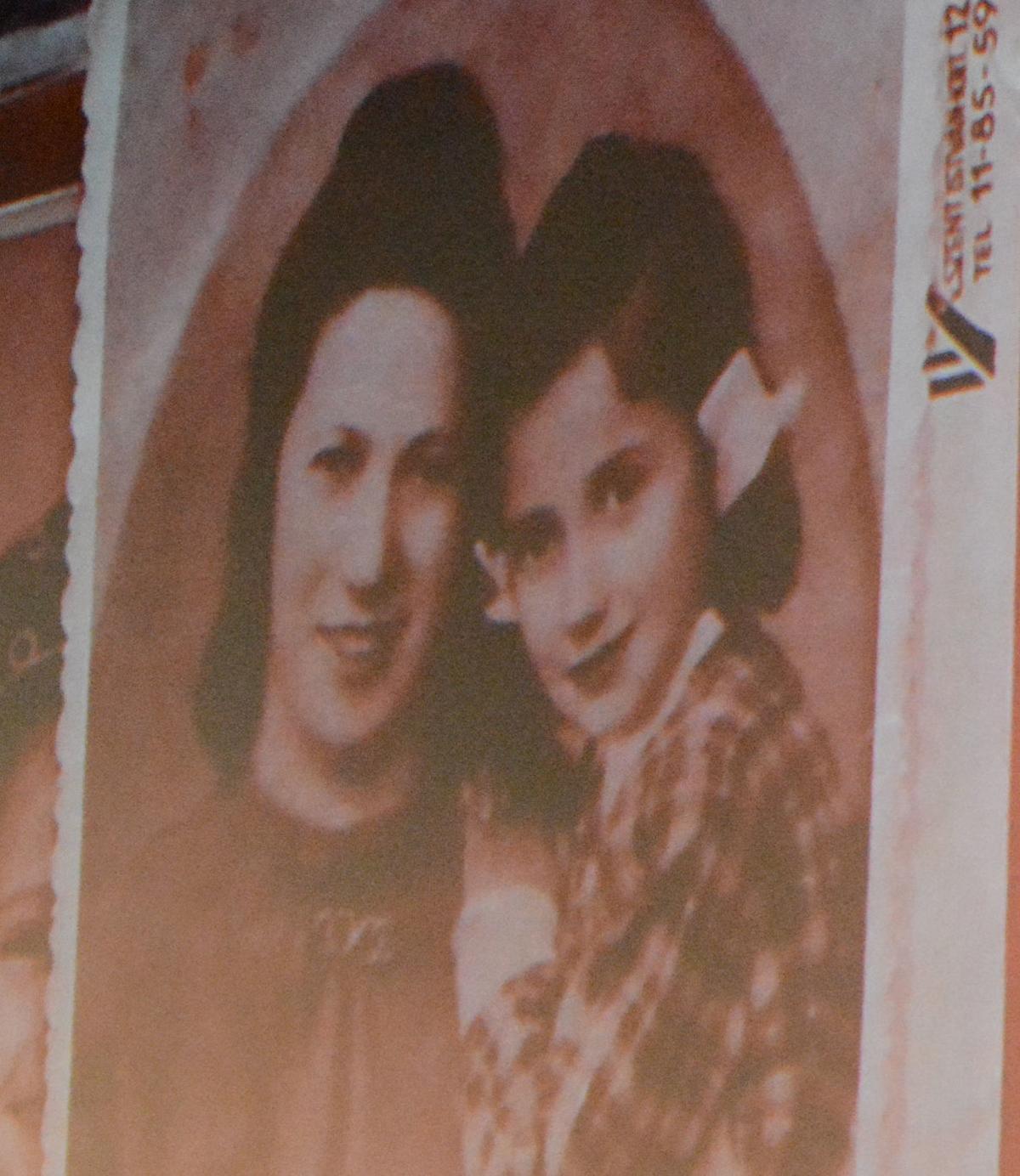 Eva and her mother, both of whom survived the Holocaust while in living the Budapest ghetto.

Eva Zaret showed Tomah High School students a photograph of her together with her father.

It would be the last time the two would see each other. Her father died under a tide of anti-Semitic hatred that killed six million Jews.

Zaret survived the Holocaust and told her story to students in the Tomah High School auditorium Feb. 7. Her visit was arranged with the Holocaust Education Resource Center Milwaukee. She told a terrifying story of hatred mixed with stories of love and redemption.

“I have a responsibility to reach out to young people and tell my story,” she said. “I show you these pictures to show I looked just like you.”

Her story began in Hungary, where her family “had friends of all religions” until Hungary started to pass a series of anti-Jewish measures in 1938. Hungary then allied with Nazi Germany in 1941 when Zaret was five years old. Her father was taken to a forced labor camp, and Zaret and her mother lived in a Budapest ghetto for the rest of the war. While fate spared them the journey to near certain death at a Nazi concentration camp, the conditions in the ghetto were still harrowing. Food was scarce, and she described bathrooms facilities as “open latrines.”

“We had no space,” she said. “We were sitting next to each other for weeks and weeks.”

She also witnessed the horror of Nazi hatred. She described a Nazi SS officer who was annoyed by a crying Jewish baby. He ripped the baby from its mother’s arms and slammed the infant against the wall.

“The baby stopped crying,” she recalled. “It was dead.”

By the time the Russians liberated Hungary in 1945, the country was devastated, and 70 percent of the Hungarian Jewish population had died.

“The beautiful city of Budapest was in ruins,” she said. “This was the war I saw − dead people everywhere, Germans, Hungarians, Russians. I thought that was it; the end of the world was here.”

She later learned the fate of her father. He was among 2,000 Jews forced by the Nazis to dig their own grave near the Hungary-Yugoslavia border at the end of a forced march before they were shot. Her father was 37.

“There is not one day I don’t think of my father,” she said.

Zaret was extremely sick when the ghetto was liberated and was transported to a medical facility in the Carpathian Mountains. She recovered physically, but the emotional scars remained.

“I was angry at God because I didn’t know who to blame,” she said. “I had to re-establish my whole self − to trust again and to love again.”

The family’s home in Hungary was annexed to Ukraine, and Hungary became a communist satellite of the Soviet Union. She said “communism was as bad as Nazism,” and after Russians crushed the Hungarian revolution in 1956, she and her husband, an Auschwitz survivor, decided to leave the country with their two-year-old daughter.

They escaped on foot into Austria with the intent of coming to the United States. She has a vivid memory of her first glimpse of America while on the boat from Europe.

“When I saw the Statue of Liberty, I cried,” she recalled. “I knew I was in a free country. There is no place on earth where true democracy exists except for this country.”

Zaret said multiple acts of kindness from strangers − several of which she shared with students − restored her faith in humanity.

“I want you to love each other because love spreads out and creates a wonderful society,” she said. “Love can create a wonderful life for people.”

The identity of the victim in a fatal Monroe County crash Feb. 8 has been released.

The identity of the victim in a fatal Monroe County crash Feb. 8 has been released.

A 52-year-old Sparta man was referred to the Monroe County District Attorney after allegedly threatening to kill a woman Dec. 22 in the town o…

Jason Church has never held public office, and he says that’s a positive as he runs in Wisconsin’s Seventh Congressional District.

A 32-year-old Tomah woman was referred to the Monroe County District Attorney for multiple charges after a Jan. 29 altercation with police at …

A 56-year-old Tomah man was referred to the Monroe County District Attorney for sixth-offense drunken driving after a Jan. 18 traffic stop in …

Sparta-based 1st Community Credit Union opened a branch office Feb 3 at 220 Buan St. on the north side of Tomah.

The last picture of Eva and her father before was he taken to a forced labor camp.

Eva and her mother, both of whom survived the Holocaust while in living the Budapest ghetto.