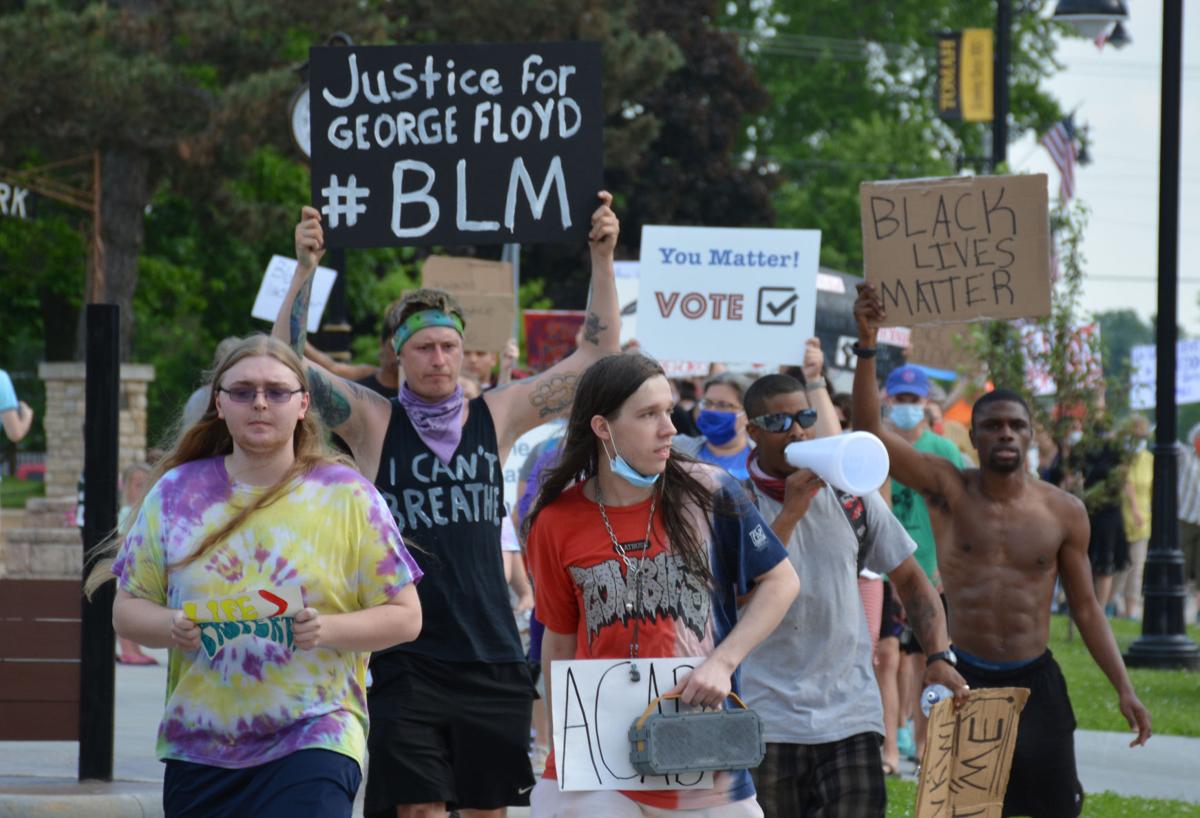 Marchers walk Tuesday on Superior Avenue in Tomah to protest the death of George Floyd. 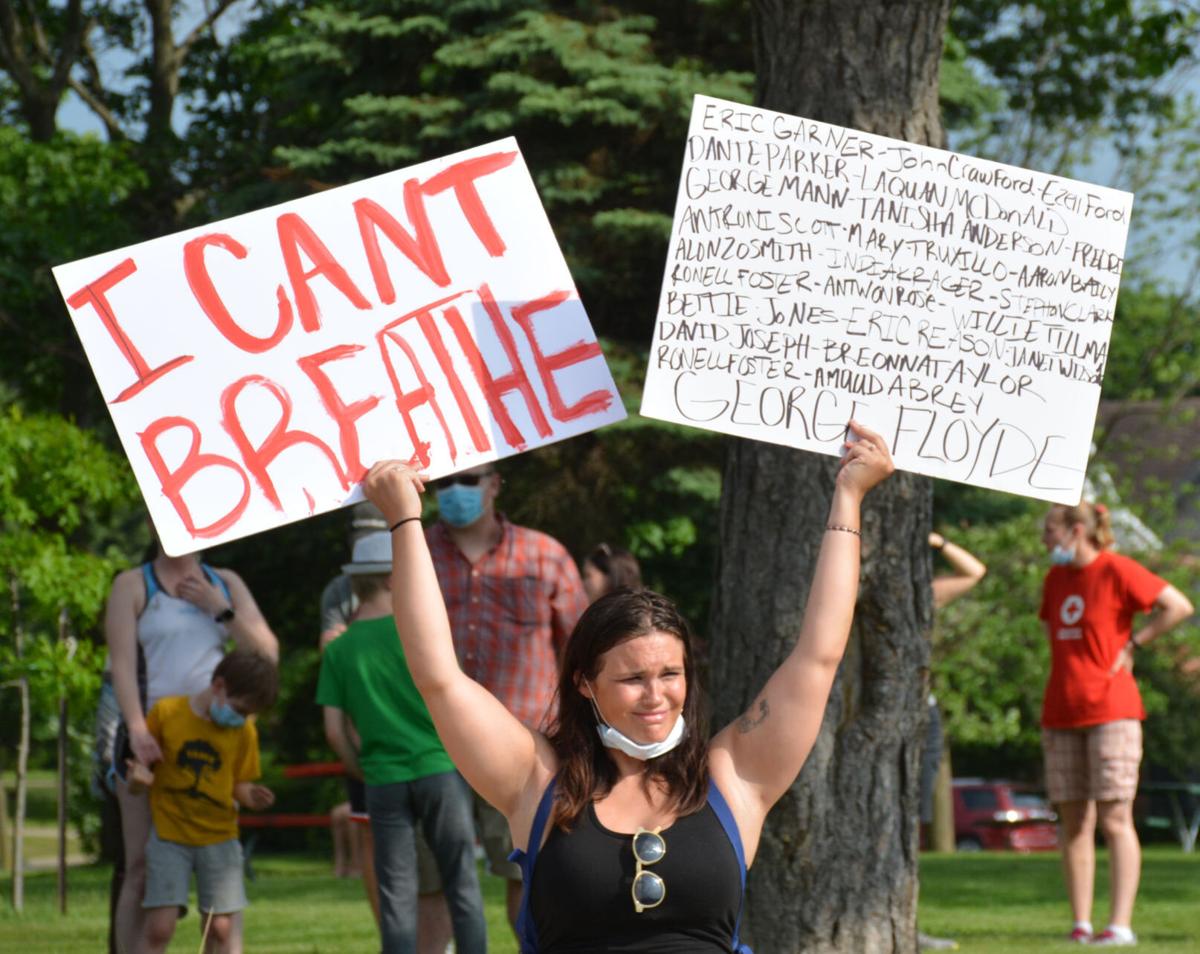 A woman holds a sign with names of people who died while in police custody and George Floyd's plea shortly before he died. 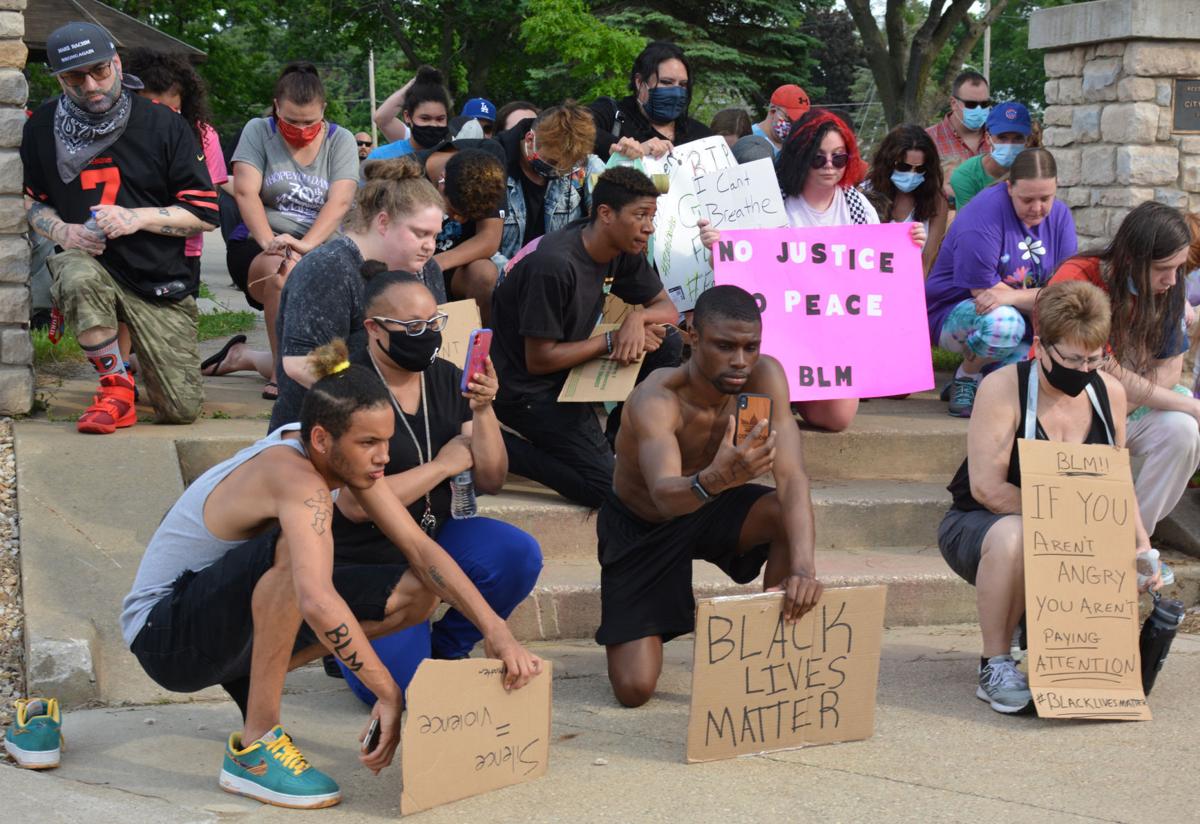 People take a knee during a moment of silence that preceded the Tomah march. 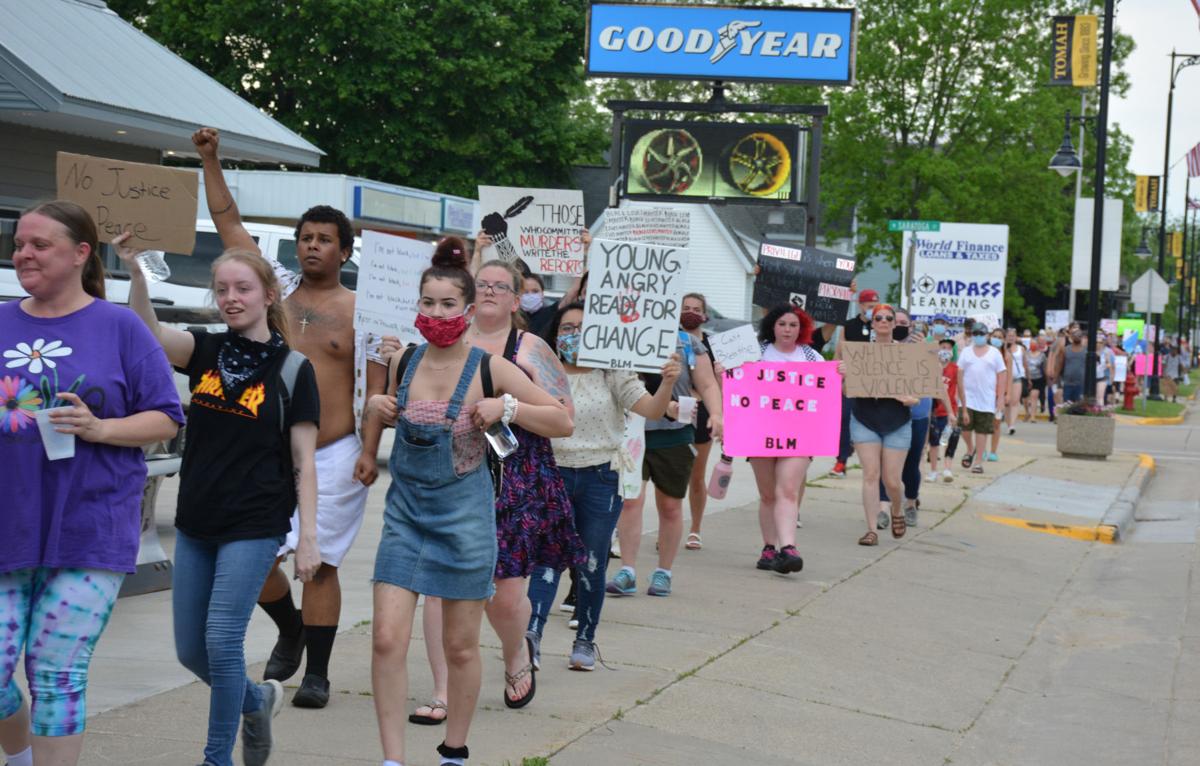 The line of marchers stretched for two blocks on Superior Avenue.

Kaylee Matthews recalled her life growing up in Reedsburg with a stepfather and siblings who she described as “persons of color.”

She said the family frequently got pulled over by police if her step-father was spotted in the vehicle, and that neighbors were quick to call police if her siblings were playing in the street.

“They’re always around,” she said of the police.

Matthews, who has since moved to Tomah, joined a large group of people who marched down Superior Avenue Tuesday in solidarity with George Floyd and against incidents of police misconduct.

Floyd, an African-American, died during a May 25 arrest in Minneapolis, where police officer Derek Chauvin was recorded pressing his knee against Floyd’s neck for nearly nine minutes while three other officers looked on.

Chauvin has been charged with third-degree murder and second-degree manslaughter.

Large cities across the country have been engulfed by protests and violence since Floyd’s death. The protest in Tomah was peaceful and conducted with cooperation from the Tomah Police Department. Officers stopped traffic on Superior Avenue so protesters could cross at Nott and Juneau streets.

Tomah police were informed of the march several hours in advance.

“The Tomah Police Department and the city of Tomah supports First Amendment Rights which allow citizens to assemble peacefully,” the department posted on its Facebook page. “A peaceful demonstration allows our community members to assemble and express their opinions/concerns with the assurances that they can feel safe in doing so.”

The number of marchers stretched for two city blocks.

“I’m hoping right now we’re making history for a peaceful future,” Matthews said. “I want to stand up so that the future is peaceful and people don’t have to go through everything and witness everything that we’re witnessing today.”

“Our officers go through training on unbiased policing,” Cummings said. “If someone ever experiences (profiling), we are more than happy to look into it.”

Quinton Hanson helped organized the rally. Before the march, he told the crowd that Floyd “died over a $20 bill. We all saw that horrible video. We are sick and tired of innocent lives being profiled and murdered.”

Floyd was reportedly detained for passing a counterfeit $20 bill.

“We’re here to let this town know that we will not tolerate racism and police brutality,” he said. “We need to make change.”

Carrie Murphy said people gathered to demand “justice being served and people being held accountable. When the system fails the people, it is the people’s responsibility to stand up and be a voice.”

Murphy said the system failed her as she navigated an abusive relationship with little or no support from law enforcement even though she obtained a restraining order. She said she spent $11,000 and 22 months to “fight the system” in court.

Andrea Estebo, a member of the Ho-Chunk nation, said she marched “to fight for equality for all people.”

Protesters said non-violence was central to the group’s message. Tylor Atha of Tomah was critical of those who committed vandalism and violence. He denounced people who “riot, break and destroy” as “co-conspirators.”

Hanson said he has no “ill feelings” toward the Tomah police.

“They were extremely helpful with setting this up,” he said. “They’re going to keep an eye on us and keep us safe.”

Two people were seriously injured after a June 27 traffic crash in Angelo shortly before 1 p.m.

A motorcyclist was seriously injured during a June 25 crash with a pickup truck in the town of Wellington.

After reporting no new cases of COVID-19 Friday, the Monroe County Health Department added three to the list Saturday and two more Sunday.

Rick Murray’s tenure on the Tomah School Board lasted less than two months.

A 36-year-old Sparta man was referred to the Monroe County District Attorney after being pulled over June 13 for reckless driving. Timothy Lin…

Fireworks will go off as planned at Tomah Recreation Park July 4, but the grandstand will be closed to the public.

Marchers walk Tuesday on Superior Avenue in Tomah to protest the death of George Floyd.

A woman holds a sign with names of people who died while in police custody and George Floyd's plea shortly before he died.

People take a knee during a moment of silence that preceded the Tomah march.

The line of marchers stretched for two blocks on Superior Avenue.