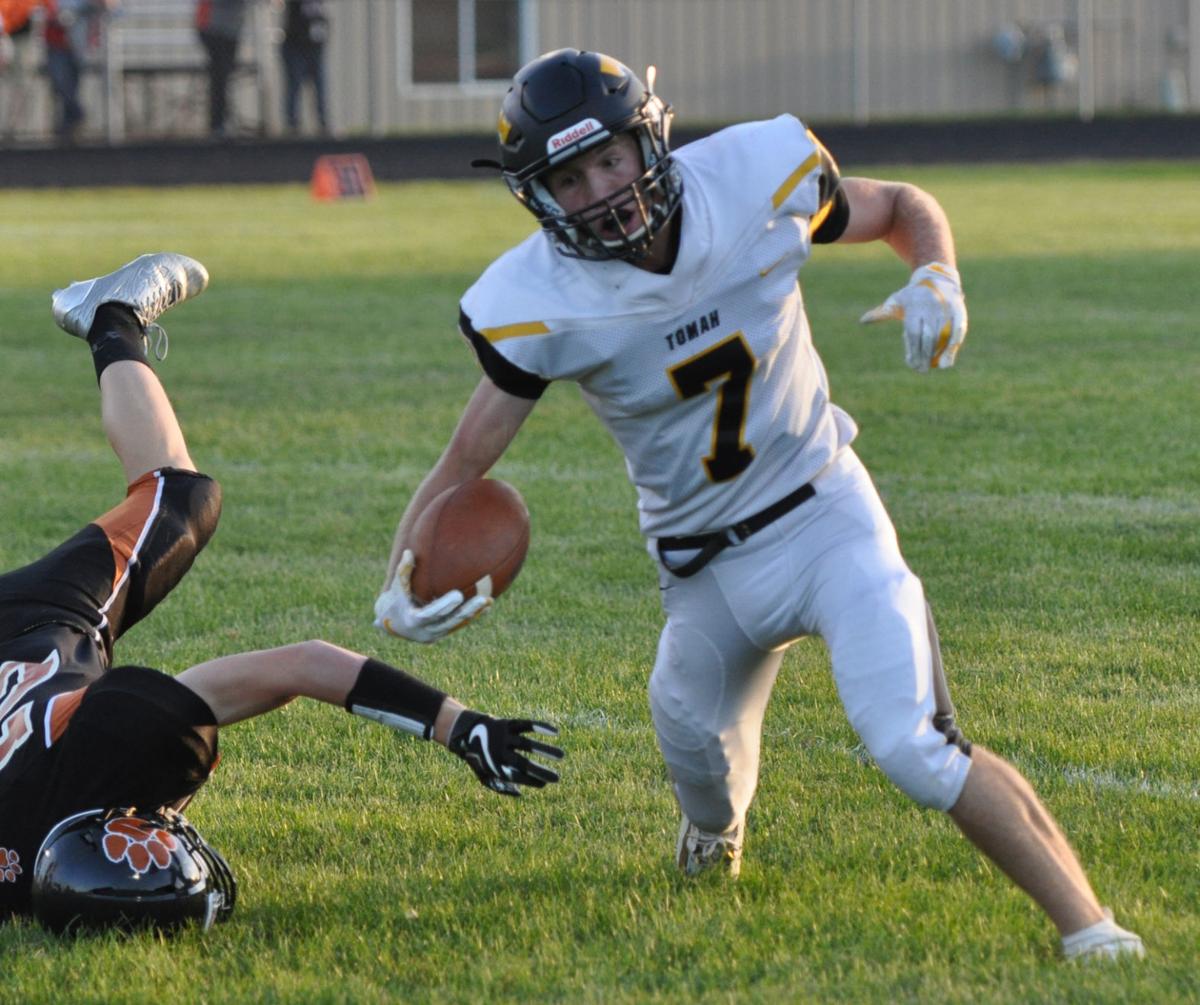 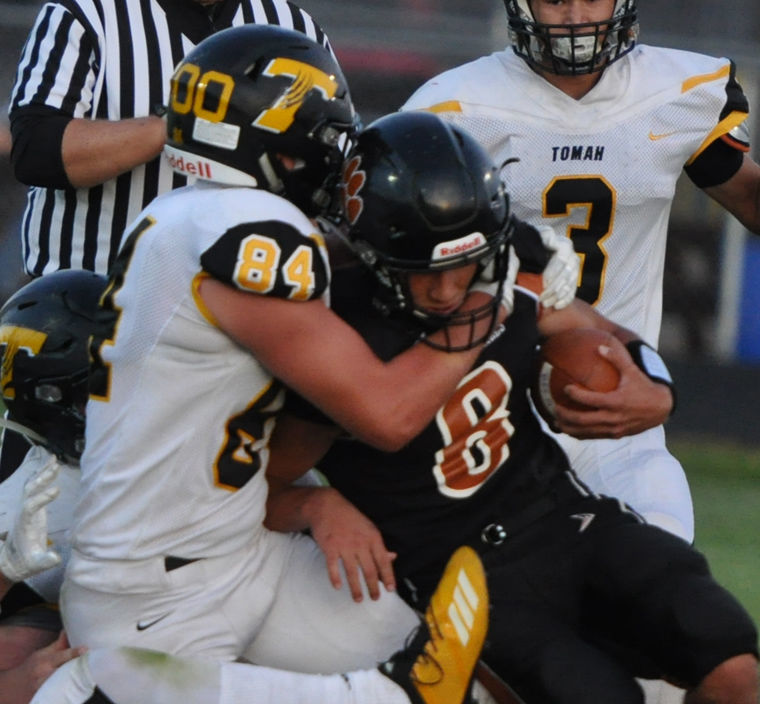 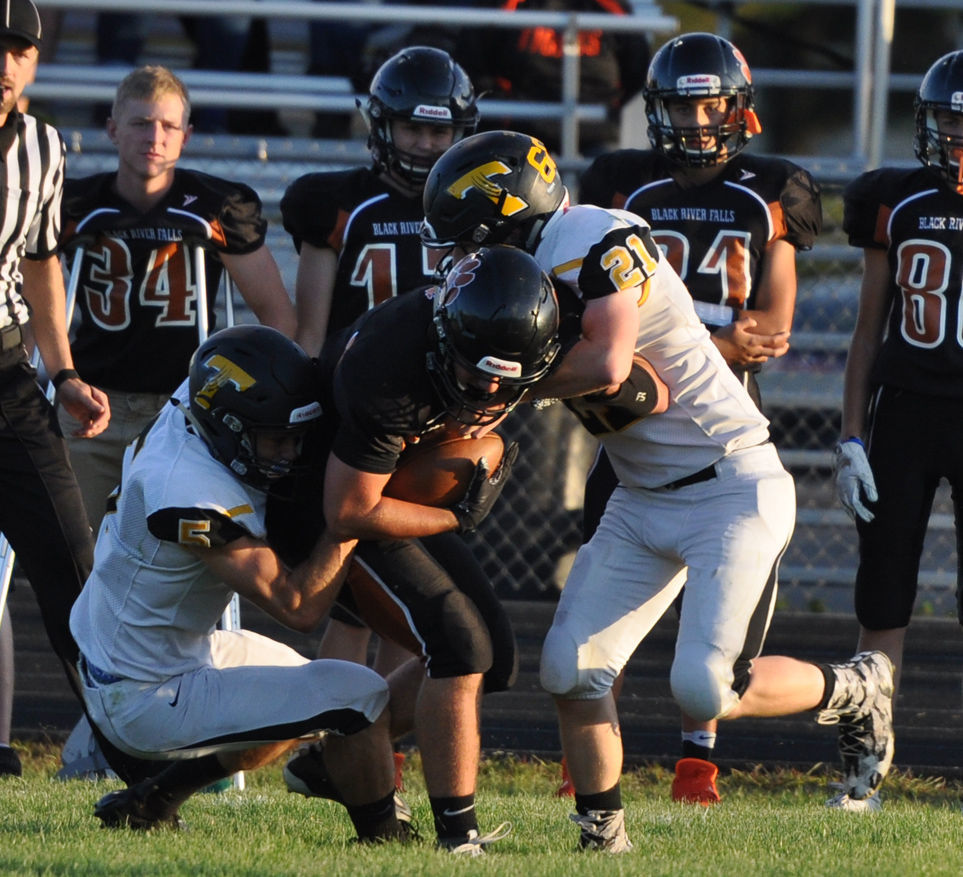 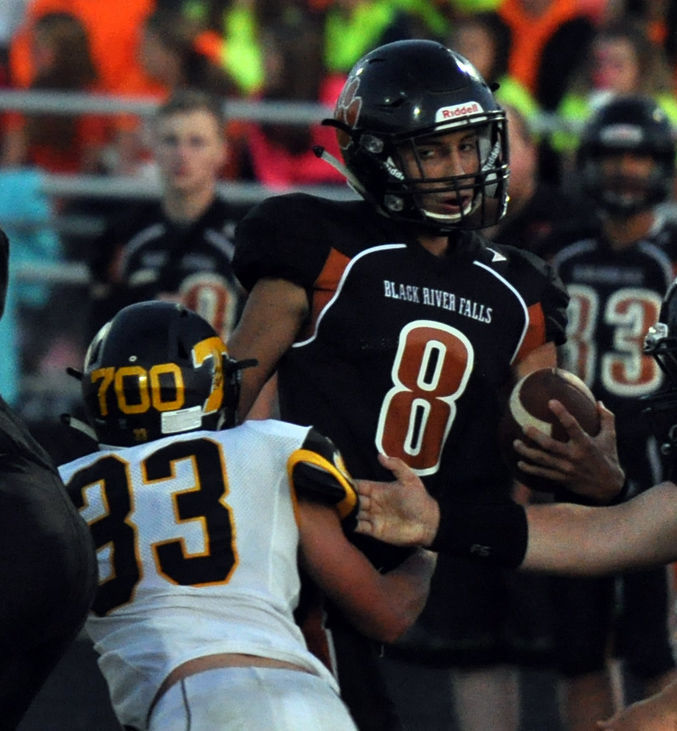 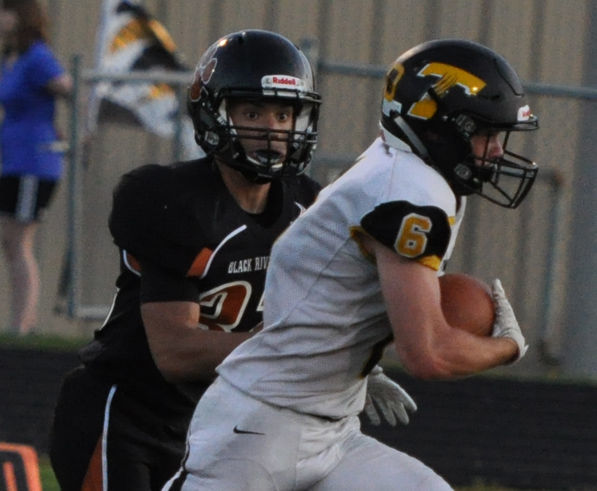 Boone Mathison (6) sprints toward the end zone after catching a pass from Justin Gerke. 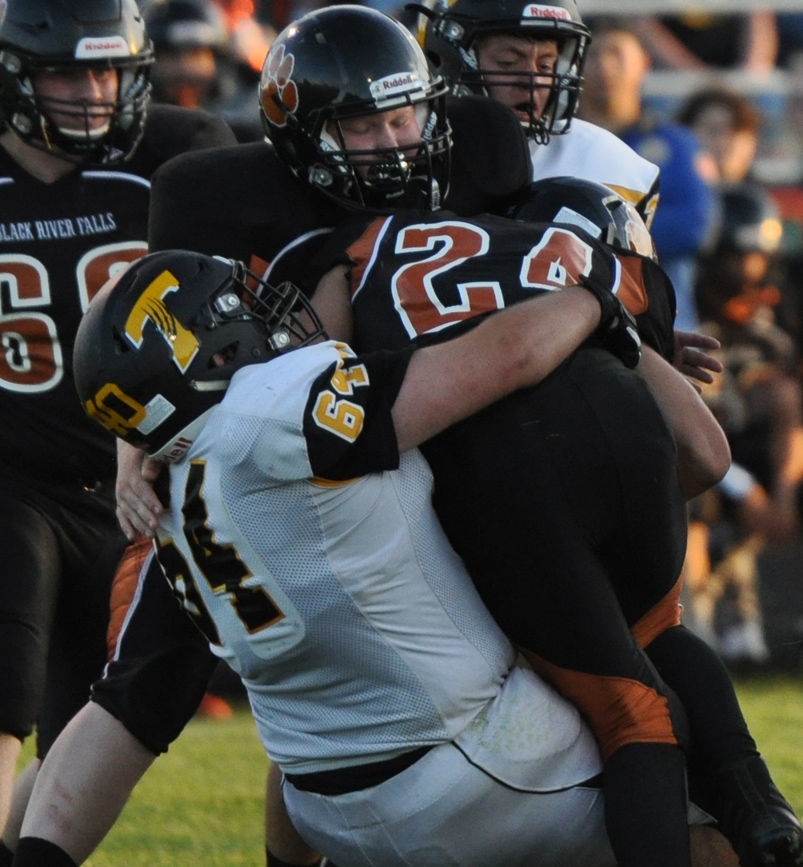 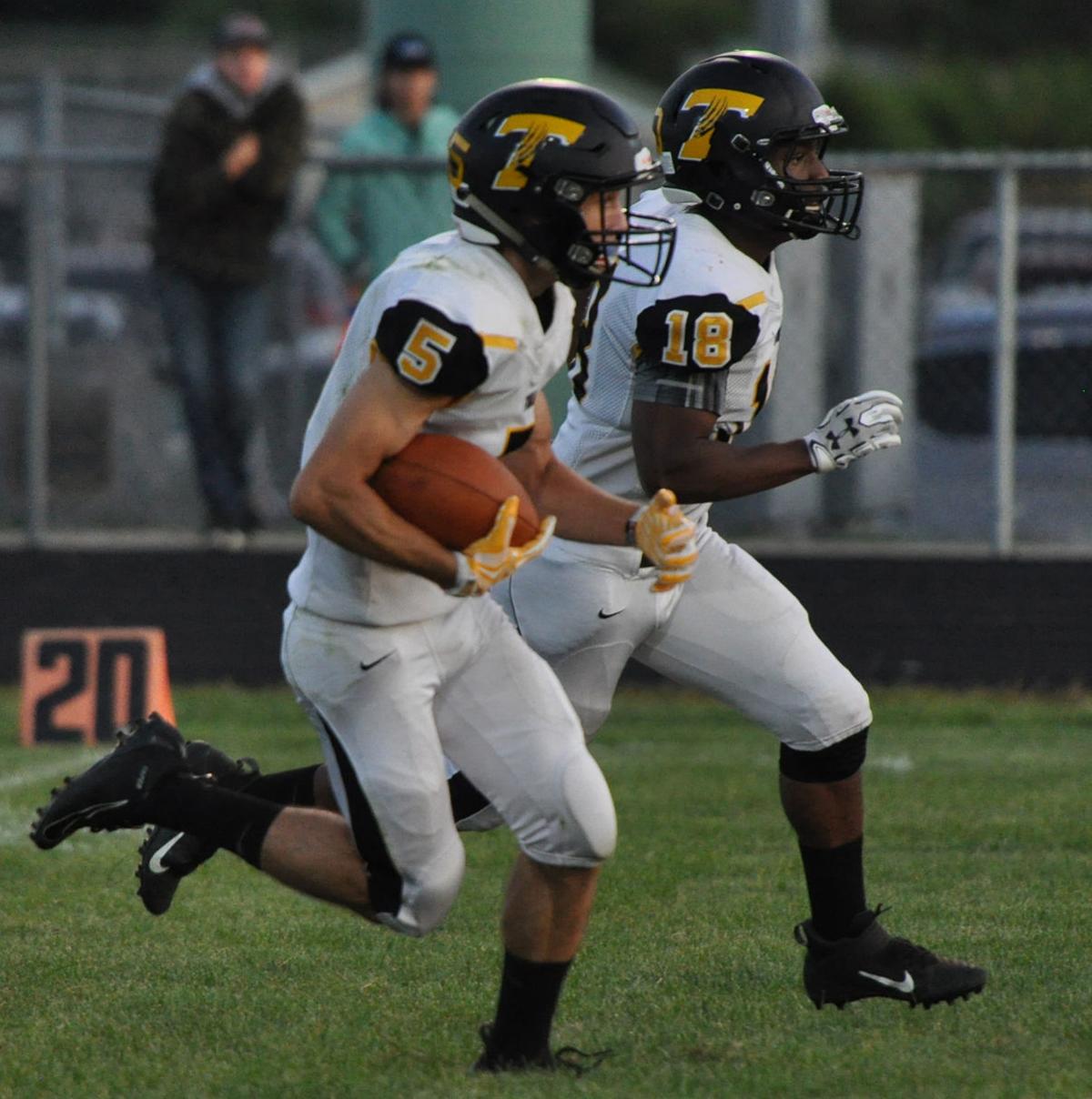 Ethan McClurg (5) fields a kickoff while teammate Nathan Spears looks for somebody to block. 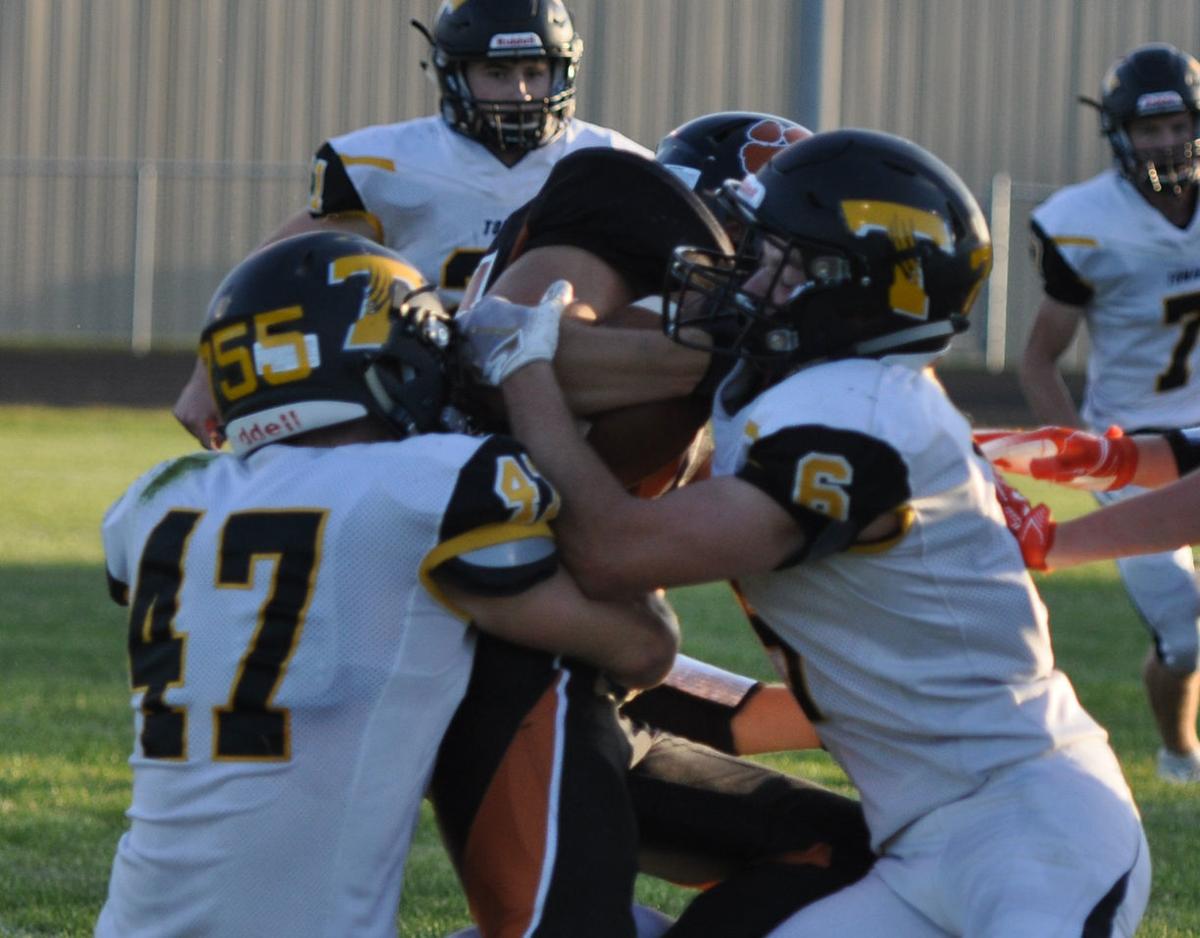 Tomah's Connor Perry (47) and Boone Mathison (6) combine for a tackle.

Tomah improved to 2-0 and already matched its victory total from the 2018 season.

Timberwolves coach Brad Plueger said the first two games have been a big step forward for Gerke, who started all nine games as a sophomore last season but lost his job in the preseason to Evan Long. Gerke reclaimed the job after one quarter last week against Mauston and completed 14 of 21 passes for 280 yards and four touchdowns since then.

Gerke's 80-yard bomb to Kade Gnewikow in the first quarter gave Tomah a 14-0 lead, and Gerke connected twice in the second quarter on long touchdown throws to Boone Mathison.

"(Black River Falls) got more aggressive, so we went over the top, and Justin made some good reads," Plueger said. "The runs after the catch were important, too."

But the most impressive touchdown may have been the first one − Gerke's 15-yard run around right end in the first quarter. Tomah switched to the spread offense this season, and Plueger said the quarterback must be a threat to run the ball.

"What we've tried to do offensively is make our quarterbacks a little tougher," Plueger said. "You're not just a drop-back anymore ... when someone gets close to you, you have to put your shoulder down −  you're going to take a few licks. I think you're going see that from (Gerke) more and more."

Plueger said Tomah got a productive effort from its offensive line.

"I thought we did a good job of creating holes for the running back and keeping our quarterback upright," Plueger said.

Black River Falls actually ran 22 more plays than Tomah, thanks largely to Elliott Bird, the Tigers' escape artist quarterback. He completed 18 of 25 passes for 181 yards and two touchdowns and accounted for 18 of the team's 28 rushing attempts.

Bird's elusiveness gave Tomah a preview of what awaits next week: Johnny Davis and La Crosse Central. Plueger got a chance to watch the Red Raiders play Thursday night and knows the Timberwolves will have their hands full.

"We have to understand the speed of the game and the physicality is going up a whole another notch next week," Plueger said.

Boone Mathison (6) sprints toward the end zone after catching a pass from Justin Gerke.

Ethan McClurg (5) fields a kickoff while teammate Nathan Spears looks for somebody to block.

Tomah's Connor Perry (47) and Boone Mathison (6) combine for a tackle.