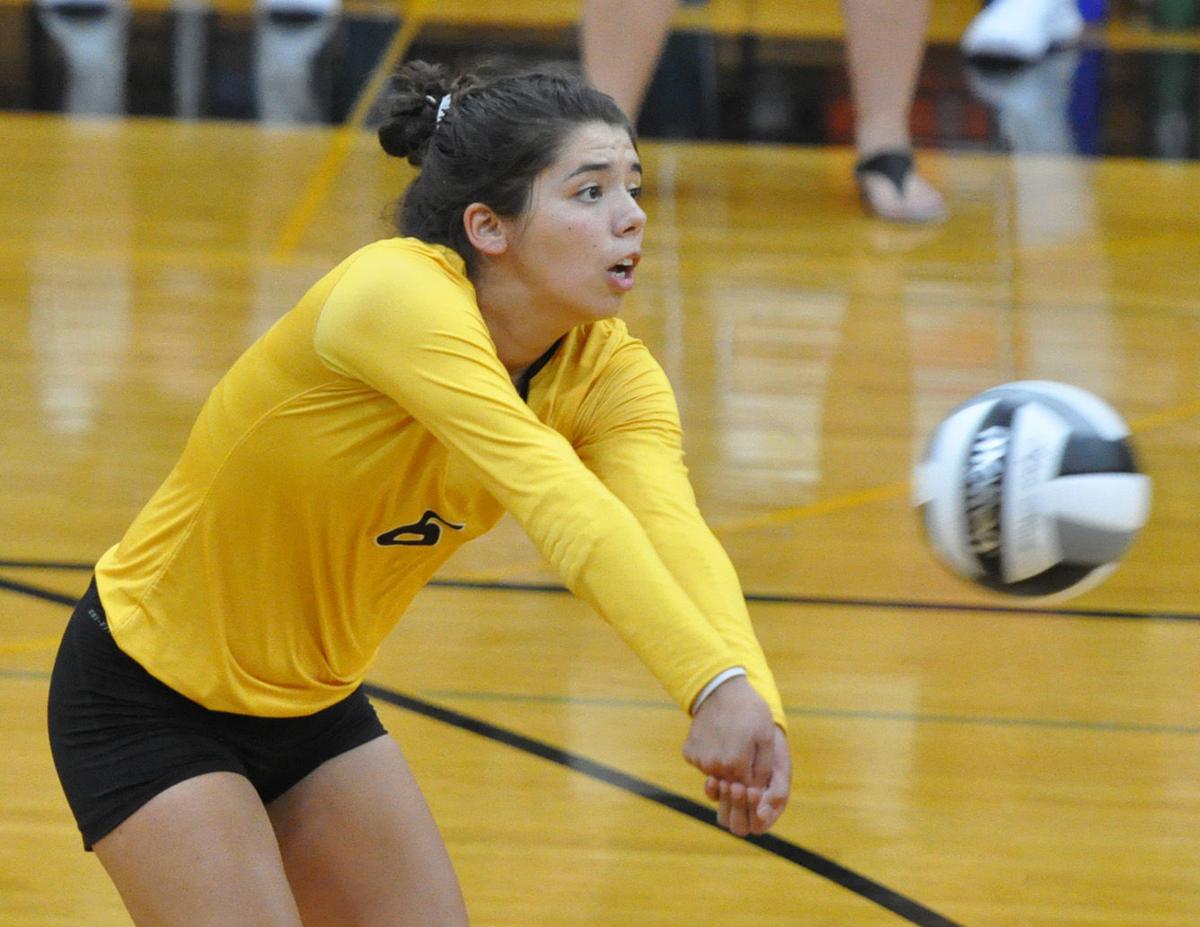 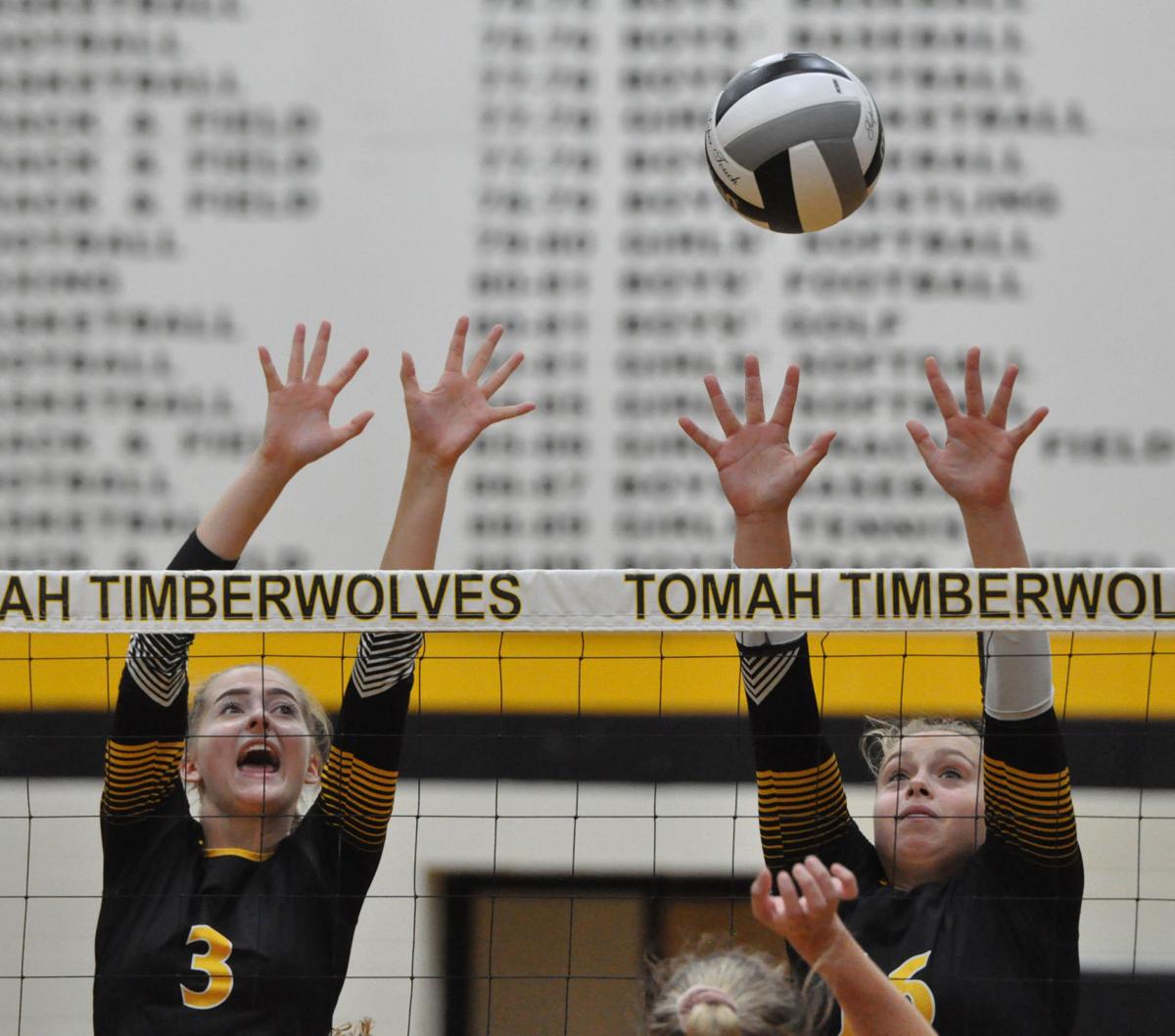 Abby Nick (3) and Savannah Murphy stretch for a double block. 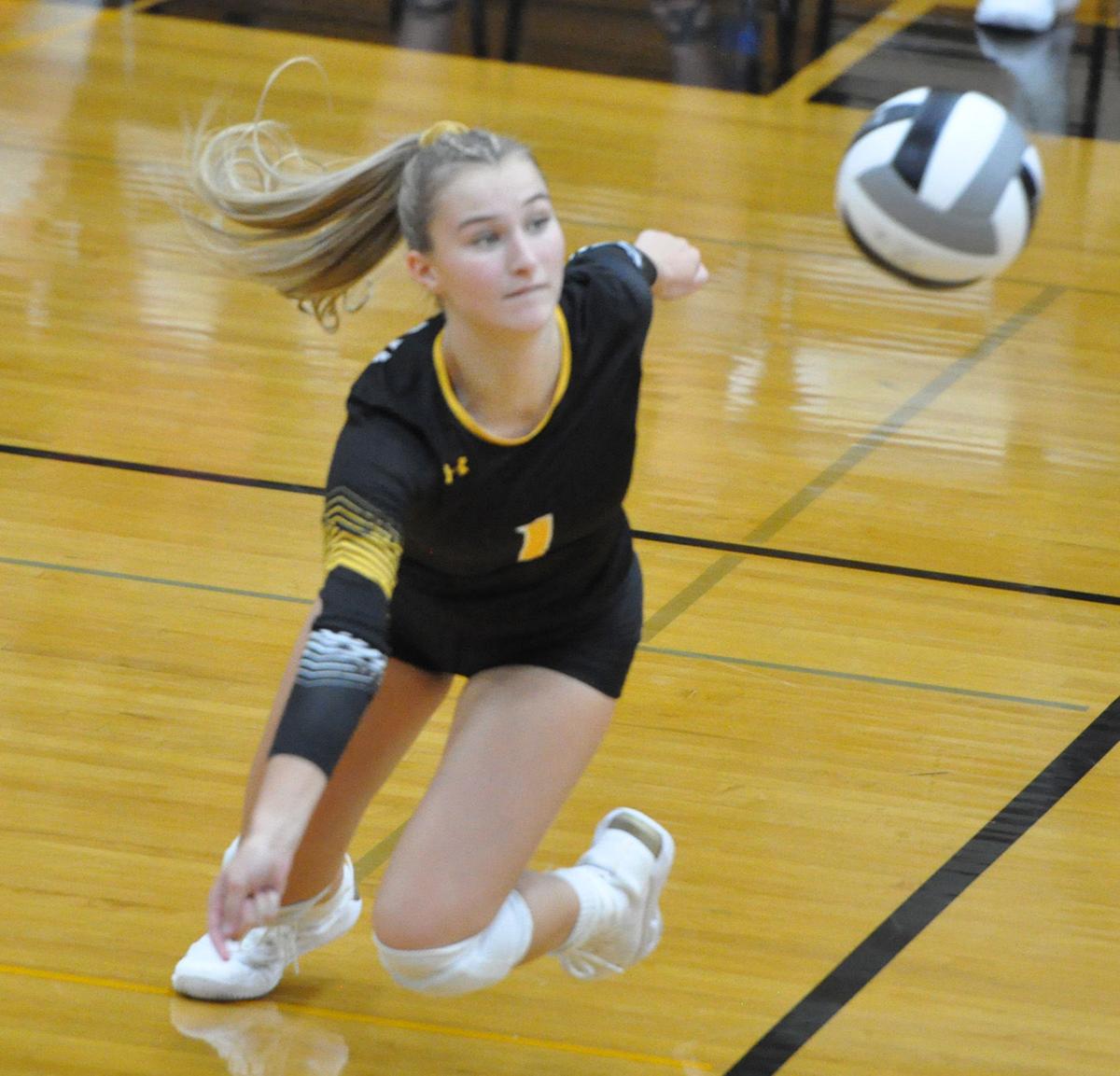 Jaylin Rezin dives to keep the ball in play. 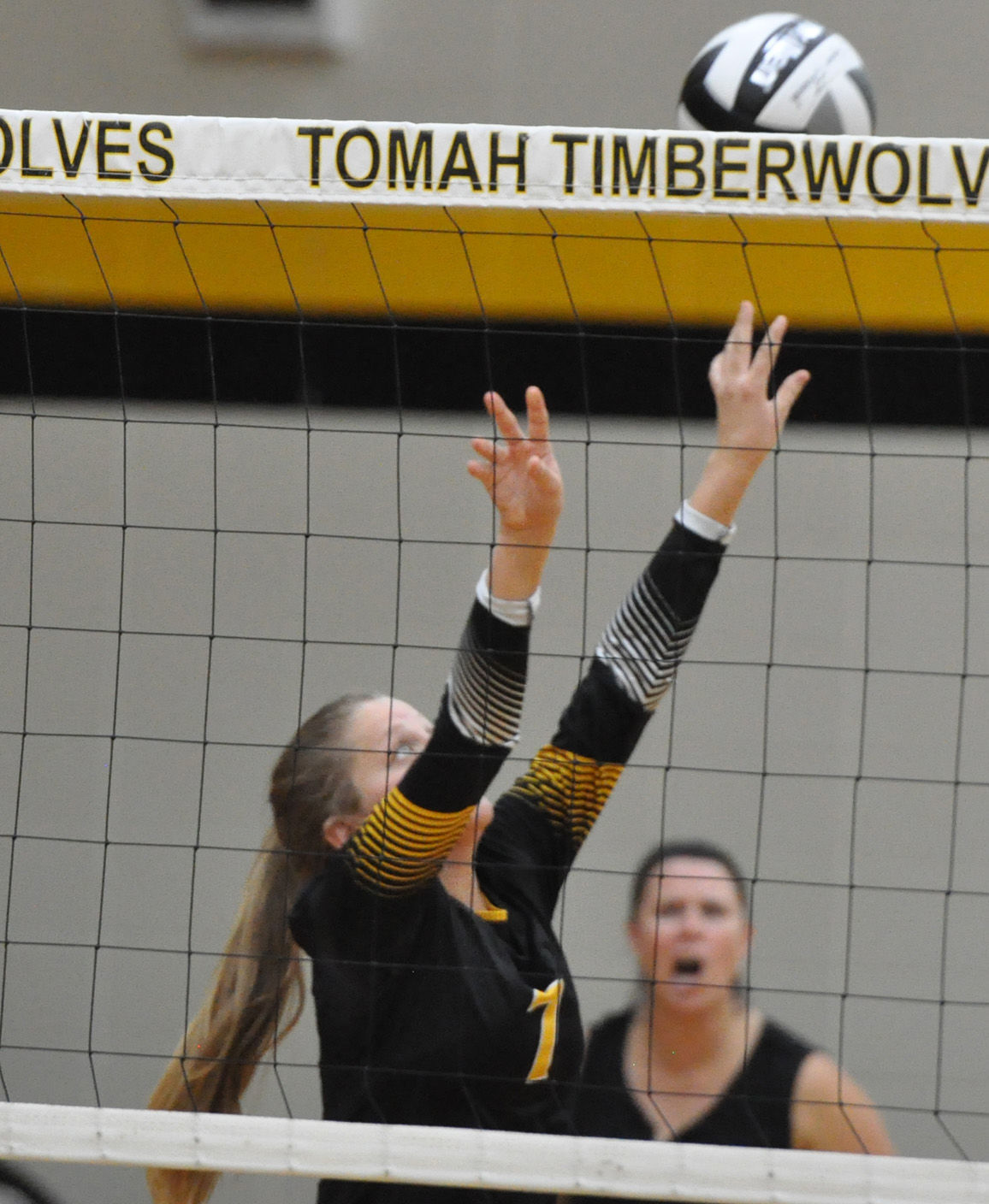 Courtney Leis sets up a hitter. 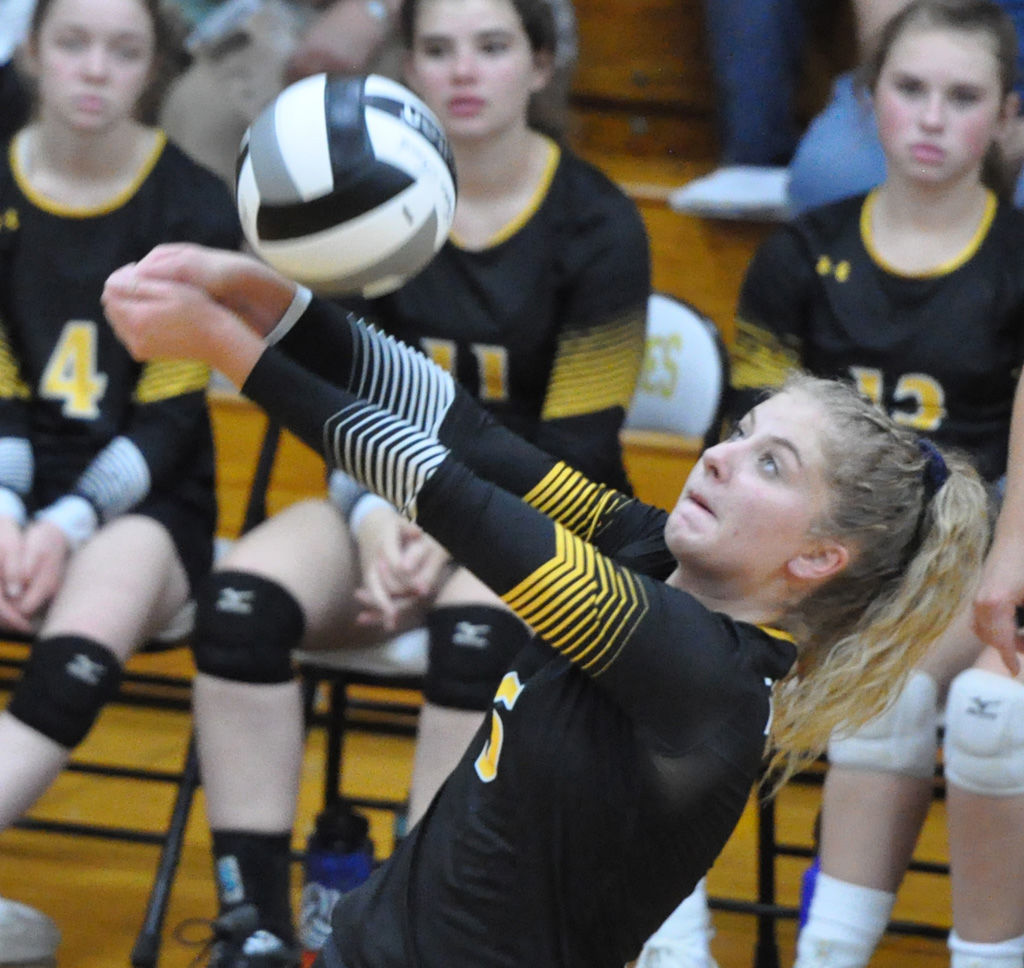 Dannika Koput keeps her eye on the ball. 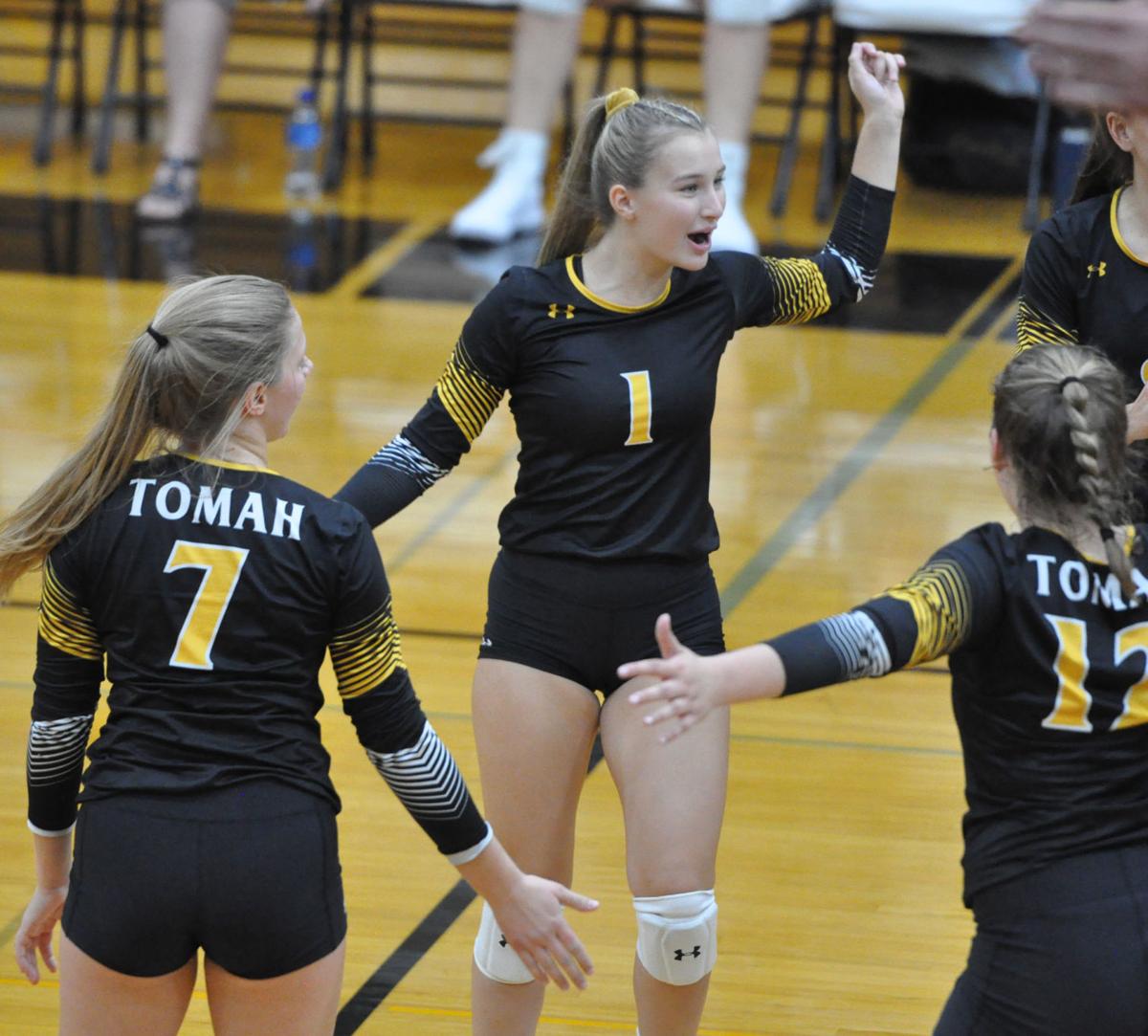 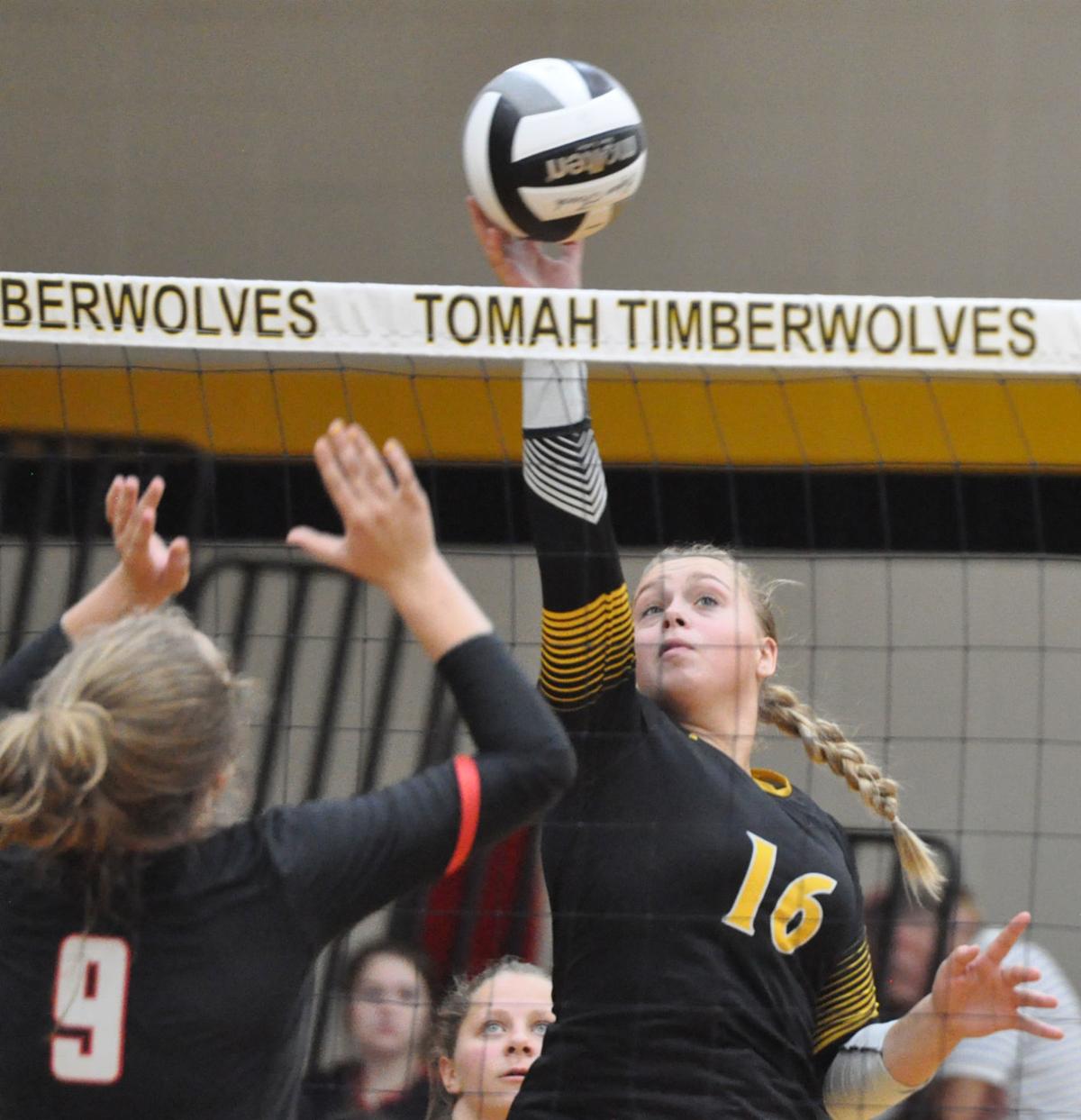 “Mentally, they were in a different spot tonight,” Walters said.

Walters said the Timberwolves were “in system” for 55 percent of the points Tuesday, a considerably higher number than the Aquinas match. She defines a point as “in system” when the ball is placed in a position that allows the setter to put the ball anywhere along the net.

“We keep that stat on the bench so I know how many options we have,” she said. “Our options are obviously a lot more open tonight. Our passes were where they needed to be, which opens our offense for our setters so they can put the ball where they need to put it.”

The Timberwolves reached peak performance in the middle of the second set when they grabbed a 19-10 lead. Central clawed back to within 24-22 before an unforced error gave Tomah the final point.

In the third set, Central rallied from a 15-12 deficit to take a 21-17 lead, which forced Walters to call a timeout. The Timberwolves responded with a 7-0 run that featured four kill points by Savannah Murphy.

Central took advantage of consecutive free balls to hammer spikes that closed the gap to 24-23, but a Central service fault ended the match.

Central’s most productive player was Cleo Tillman, who tallied 16 digs and three aces.

Tomah improved its MVC record to 2-3, while Central fell to 1-5.

The Timberwolves have a 10-11 overall mark, which includes matches that produced a third-place finish at the Monona Grove Invitational Sept. 7. Tomah defeated Ripon in the third-place contest and also defeated Madison La Follette while losing to Monona Grove and Verona.

Tomah American Legion baseball was supposed to turn a new page at Glendale Park this season.

A girls hockey player from Tomah High School who competes on the Black River Falls co-op squad has won a statewide hockey honor.

Dustin Derousseau became a complete varsity basketball player in 2019-20, and he stood out in a conference loaded with high-level talent.

Abby Nick (3) and Savannah Murphy stretch for a double block.

Jaylin Rezin dives to keep the ball in play.

Courtney Leis sets up a hitter.

Dannika Koput keeps her eye on the ball.