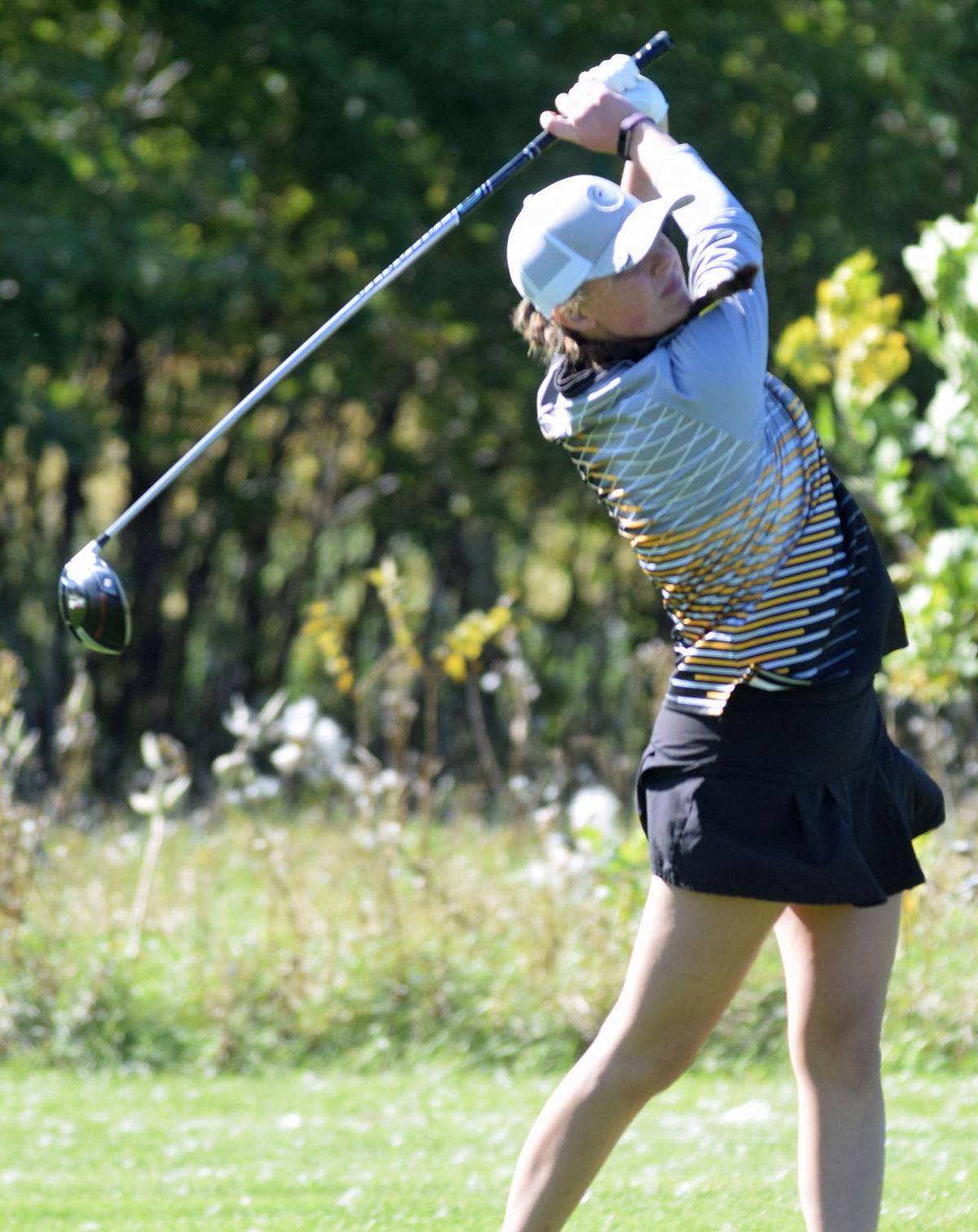 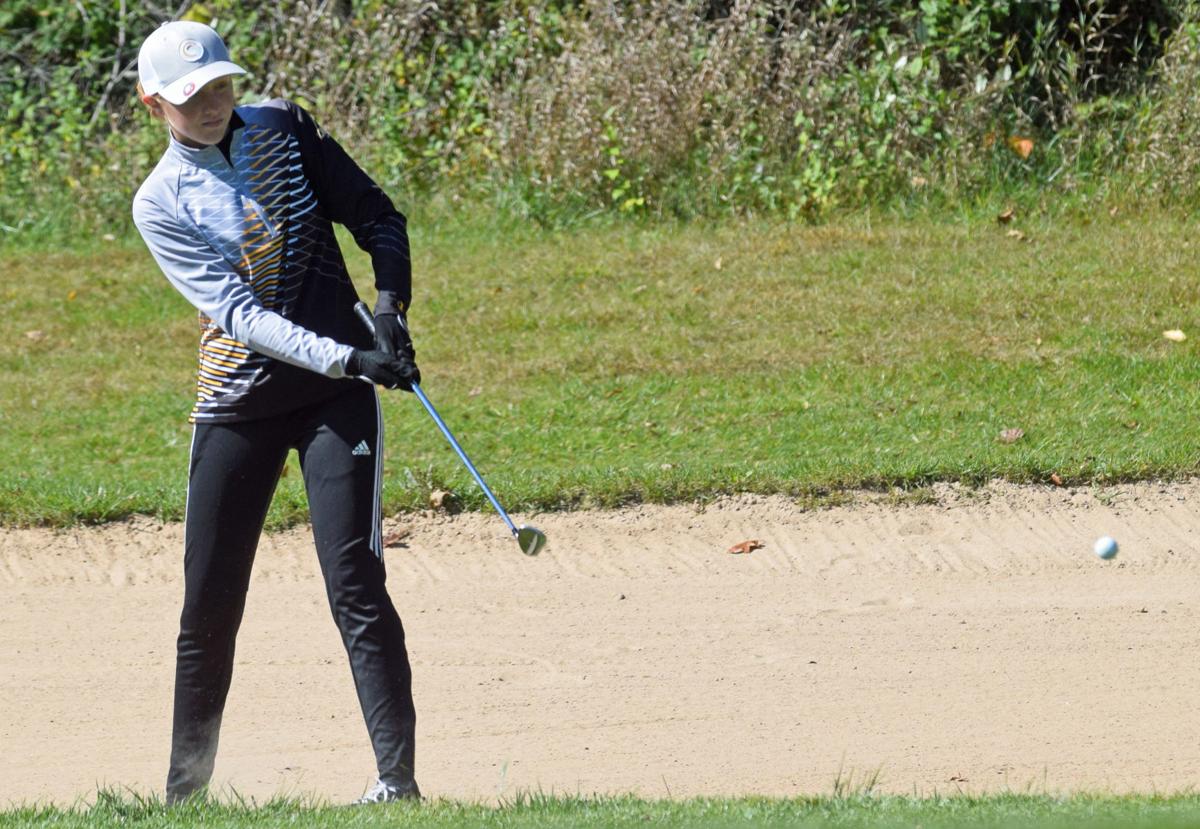 Tomah sophomore Brin Neumann hits out of a bunker on the par-4 second hole during Monday's WIAA Division 1 Tomah sectional at Hiawatha Golf Club in Tomah.

“I knew we were going to come back strong because we had most everybody back from last year,” sophomore Brin Neumann said.

She was right. The Timberwolves are headed to their second straight WIAA state tournament after winning Sectional competition played Monday on their home course at Hiawatha Golf Club.

The Timberwolves lost just one senior from a team that finished seventh in Division 1 and already had their sights on bigger and better things the following season.

That was, of course, before anyone had heard of COVID-19. While the uncertainty of the fall sports season was tough on high school athletes everywhere in Wisconsin, it was especially hard for a Tomah golf squad that had such high expectations coming into 2020.

“I didn’t think we were going to have a season until a week before we started,” said Sophie Pokela, last season’s Mississippi Valley Conference player of the year as a sophomore. “I was nervous at the start because we didn’t have as many summer tournaments.”

The season started late, and the schedule was significantly different from the one lined up before COVID-19. Coach Tonya Gnewikow had wrangled berths in some prestigious invitationals only to have them cancelled.

“In a normal season, we can have 15 matches. This year we had nine,” Gnewikow said. “We were lucky to have a pretty normal conference season with being down just one team.”

The nine matches were enough to prepare for a suddenly more difficult sectional that added Waunakee. The Tomah Sectional already included Onalaska, and the Hilltoppers edged the Timberwolves in a pair of Mississippi Valley Conference matches, including one in Tomah.

Only the top two Sectional teams advance to state.

“We knew the new sectional was going to be tougher than last year,” sophomore Amelia Zingler said.

Tomah won the sectional by three strokes over Waunakee with Onalaska finishing third. Gnewikow said her golfers were able to cope with a windy course that put a premium on getting distance off the tee.

“Our motto was ‘grip it and rip it,’” Gnewikow said. “I’ve got a couple of long hitters, and that really helps us.”

That approach will come in handy at the state meet at Meadow Valleys in Kohler, which replaced University Ridge in Madison due to Dane County’s COVID-19 restrictions. The team took a trip to Meadow Valleys two weeks ago and saw a very different course from the one that hosted last year’s state meet.

“The one in Madison is narrower, and it has a lot of trees,” Zingler said. “Kohler is wide open and has really undulating greens.”

Neumann described the Meadow Valleys course as “like a picture from a magazine.” The course has hosted major golf events, including the U.S. Women’s Open in 1998.

Gnewikow said her team is ready for a course that rewards a cerebral approach. She said all six team members — including senior Jayda Zhu, junior Hannah Zhu and sophomore Maddie Ewers — are high honor students.

“They’re analytical and smart decision makers on the course,” Gnewikow said. “They’re the best team I’ve ever had about yardage and selecting clubs.”

WHERE: Meadow Valleys at Blackwolf Run

First the opponent was West Salem.

Tomah volleyball gets victory at Onalaska

The Tomah High School volleyball team found a way to beat Onalaska — get the Hilltoppers on their own home court.

Tomah sophomore Brin Neumann hits out of a bunker on the par-4 second hole during Monday's WIAA Division 1 Tomah sectional at Hiawatha Golf Club in Tomah.