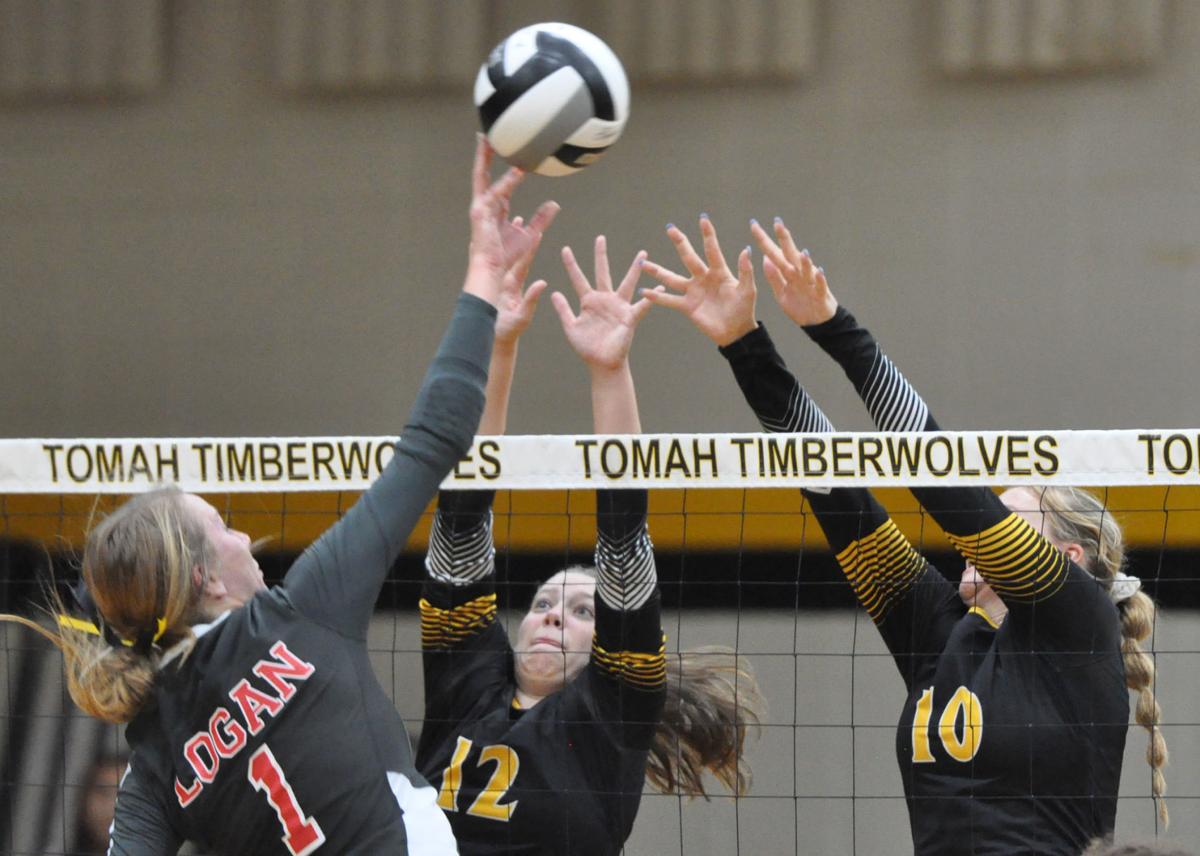 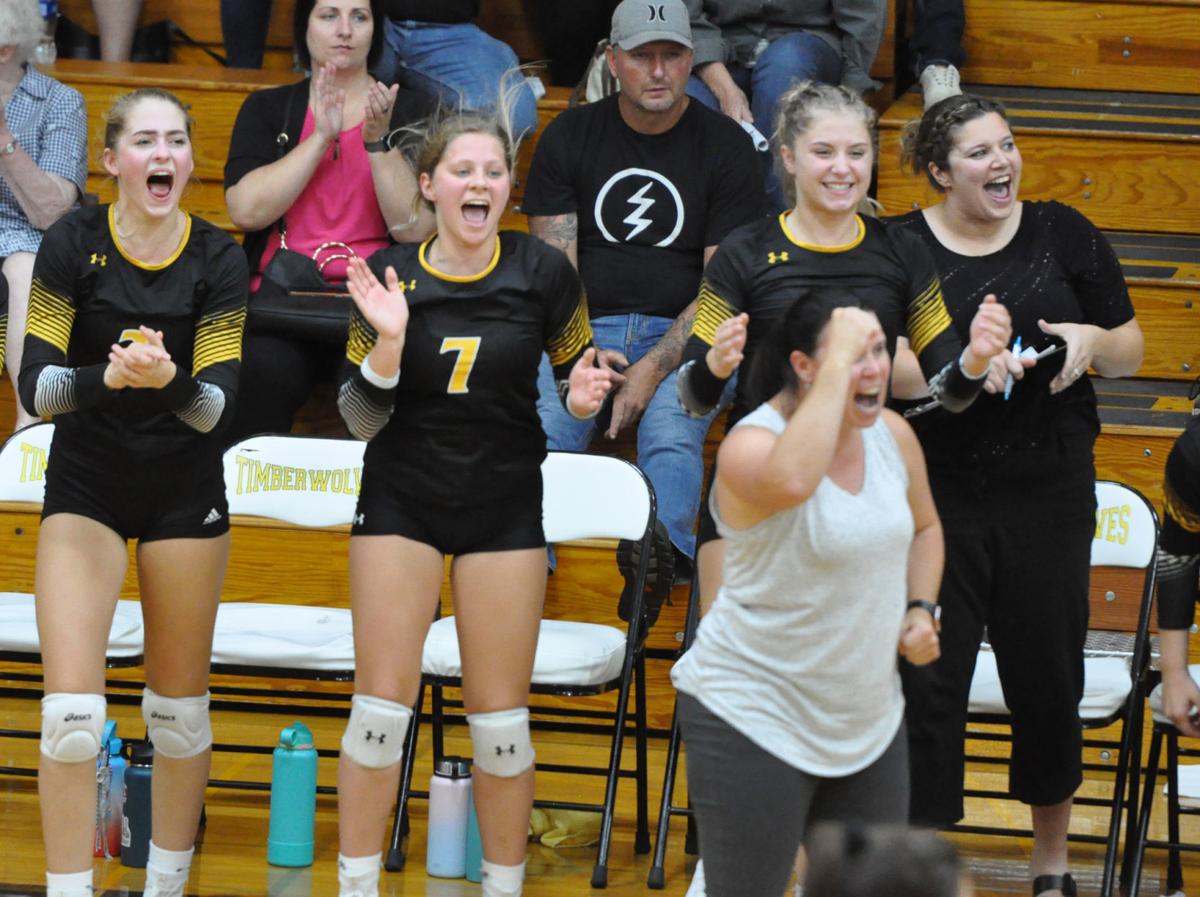 The Tomah bench reacts to the winning point of the fifth set. 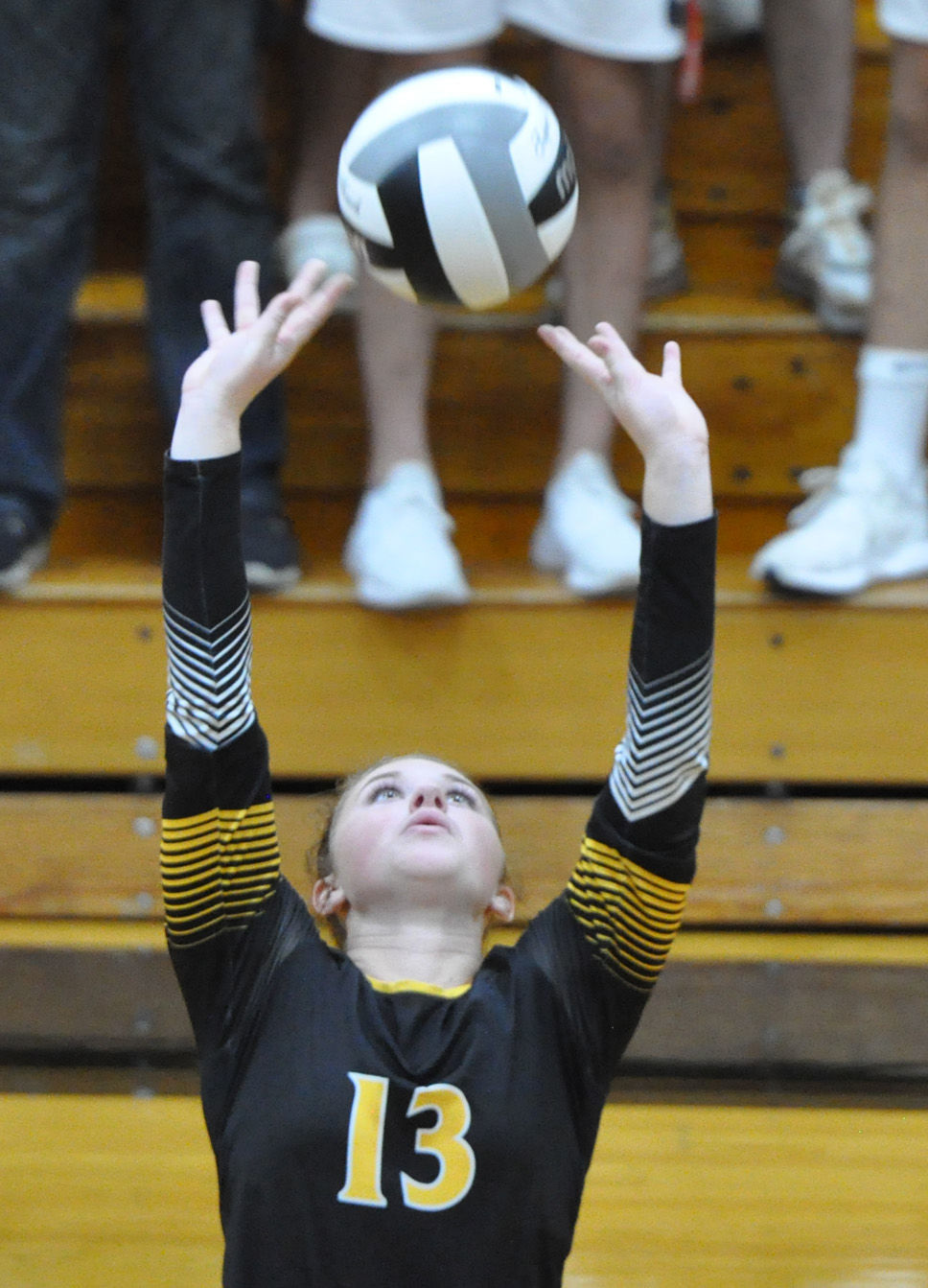 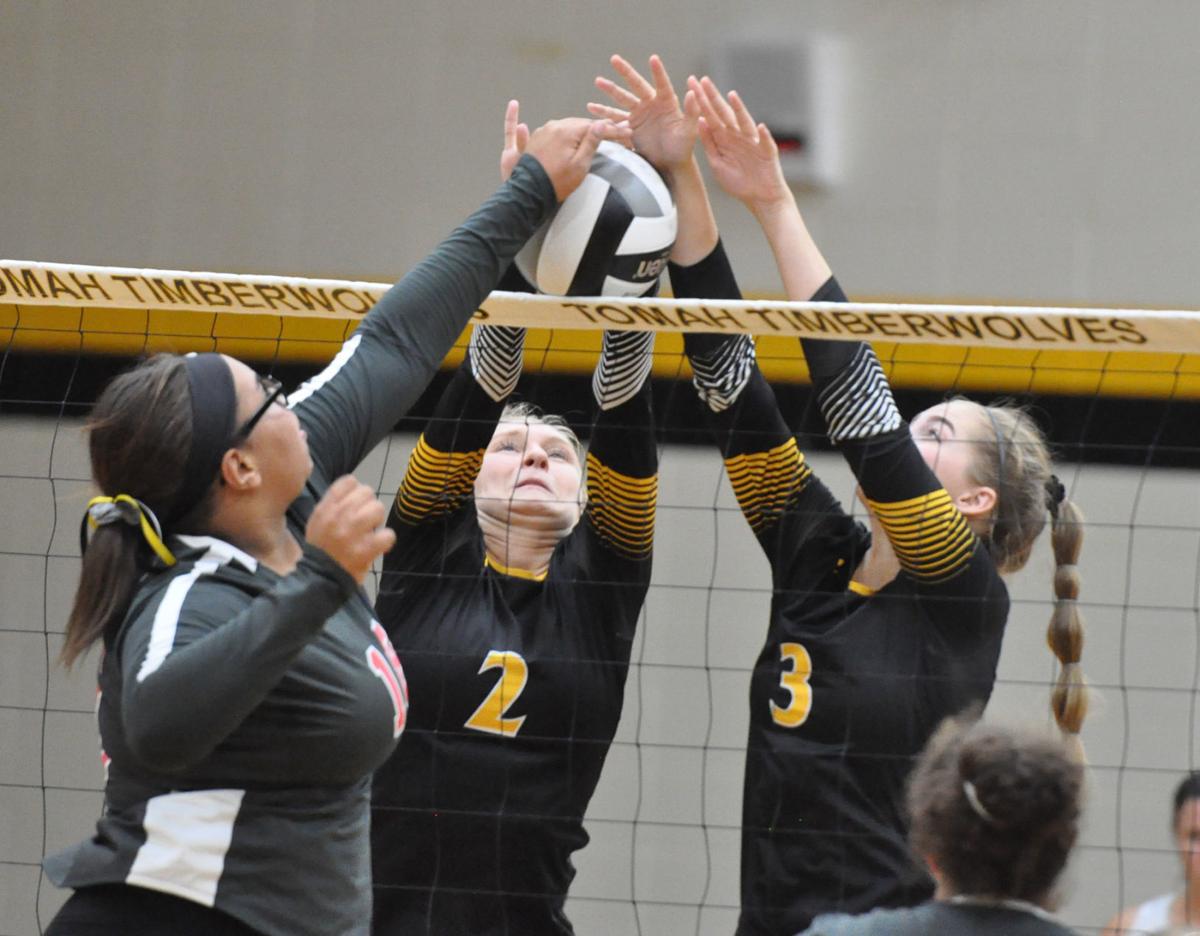 Tomah's Jenna Tracy (2), Abby Nick (3) and JoJo Davis all get their hands on a contested ball at the net. 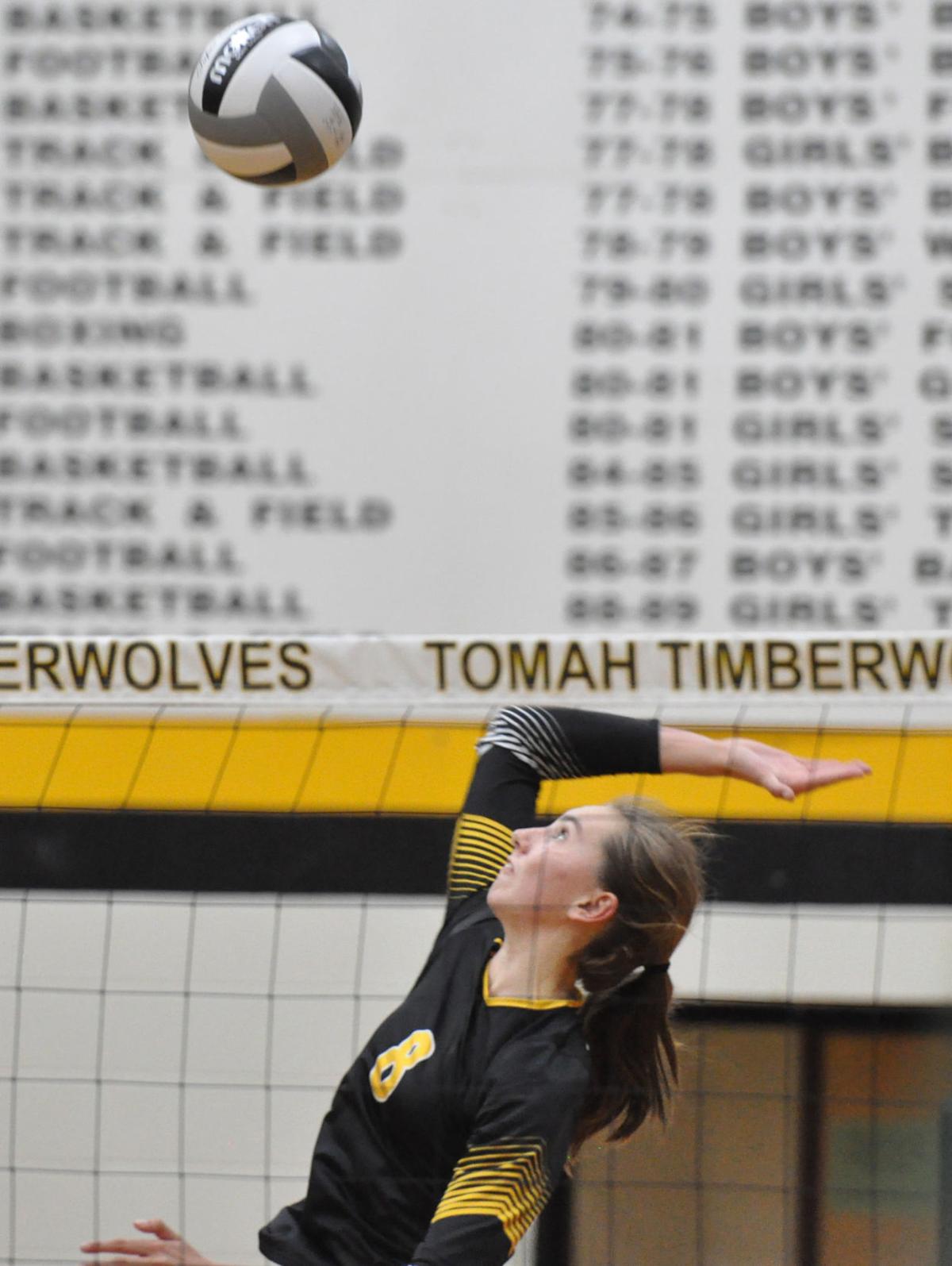 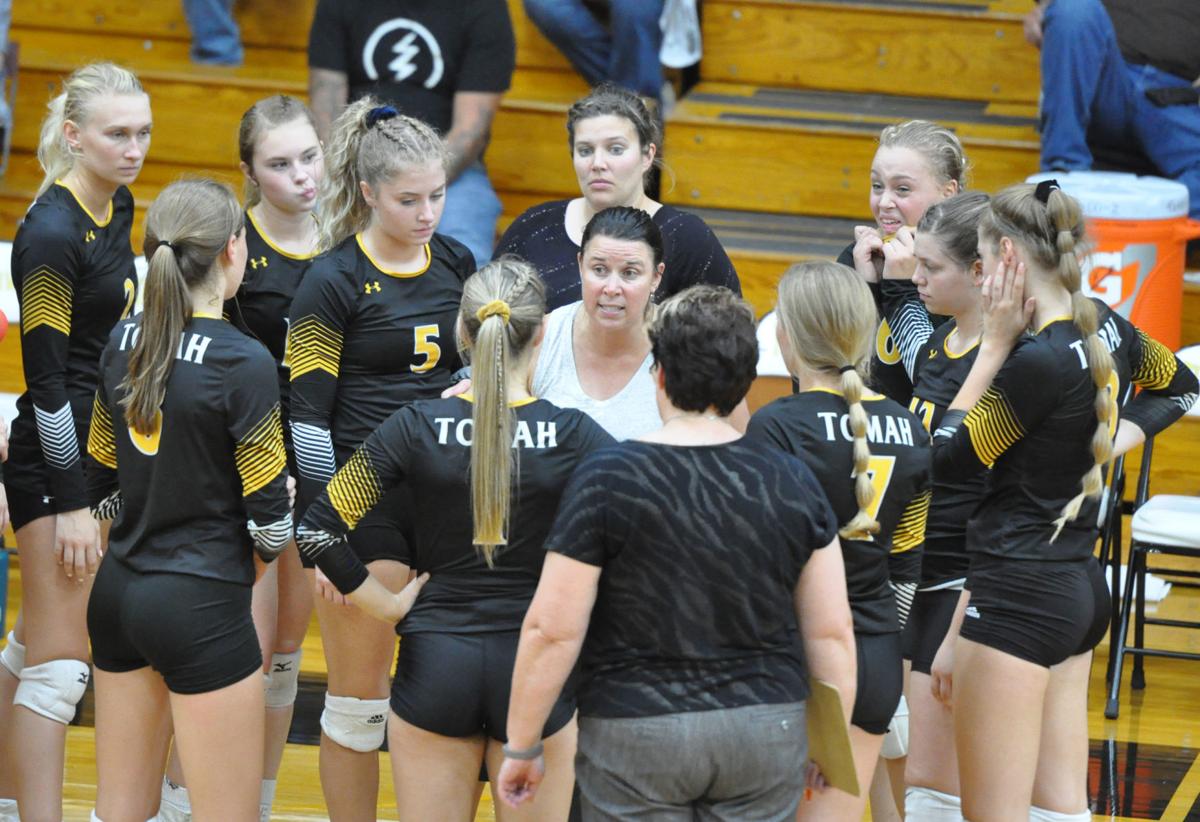 Tomah coach Sarah Walters motivates her squad during a timeout. 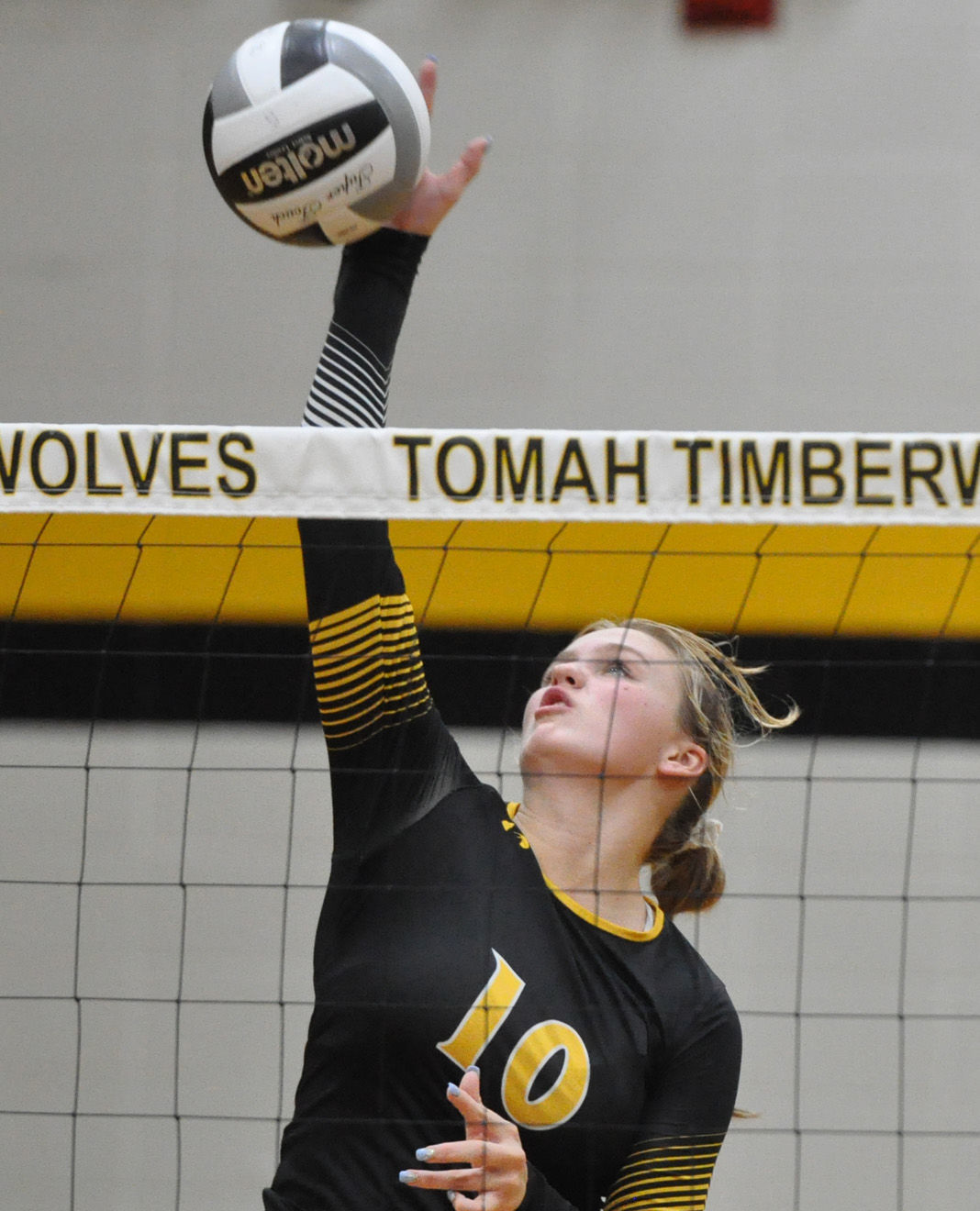 The Tomah Timberwolves were up 2-0 with a 9-5 lead in the third set when they lost the momentum.

It took until the fifth set to get it back.

Tomah won its second straight MVC match and improved to 3-3 in conference play and 11-11 overall.

“I guess that was a good example of overcoming adversity,” said Tomah coach Sarah Walters. “By the fifth game we really decided we had to get back to basics.”

Tomah was on track to end the game early before Logan unloaded with a 6-0 run in the third set to grab an 11-9 lead. The Timberwolves worked back to a 14-14 tie, but Logan launched 10-2 run that proved decisive.

In the fourth set, Tomah started slowly and never recovered. Logan used a 10-3 run to take a 16-7 lead, and it was actually worse for the Timberwolves than it reads. Three of Tomah’s first seven points were courtesy of Logan service faults.

The free balls were particularly deadly because it allowed Logan to set up heavy hitter Marissa Kleman, who can deliver heat from either side of the spiking line.

“You give them a free ball, and they can set (Kleman) up wherever she’s at,” Walters said. “Otherwise, they tend to push a lot deep.”

Tomah took the lead for good early in the fifth set after an Alyssa Whaley block kill. It triggered a 6-1 run that was capped by a Savannah Murphy spike.

Logan took an 8-3 lead in the first set before Tomah seized a 14-10 advantage. Logan rallied to take a 21-19 lead before Murphy cut loose. She recorded four consecutive kills − two spikes and two blocks − that pushed Tomah to a 24-22 lead. The 25th point came when Kleman wound up for a hard spike that came within an inch of staying in bounds.

In the second set, Tomah rallied from a 15-13 deficit and scored the set’s last five points. Courtney Leis scored an ace for the 23rd point, Samantha Shamhart pounded a kill for the 24th point and a Logan hitting error was the 25th point.

Kleman dominated her side of the court with 25 kills and 20 digs. No other Logan player had more than two kills. Logan’s Lauren Bogen had 19 digs.

Tomah’s next home match is Tuesday, Oct. 1 vs. Sparta. The varsity reserve and junior varsity matches start at 5:30 p.m., followed by the varsity at 7 p.m.

The Tomah High School wrestling team will send 10 wrestlers to sectional competition in Verona this week.

The Tomah/Sparta boys hockey team let a pair of contests slip away heading into the post-season.

BLACK RIVER FALLS - With the start of the second overtime, Ellie Dolesy skated into uncharted territory.

The Tomah High School wrestling team was in desperate need of good news Friday, and it came from someone who hadn’t wrestled much this season.

The Tomah bench reacts to the winning point of the fifth set.

Tomah's Jenna Tracy (2), Abby Nick (3) and JoJo Davis all get their hands on a contested ball at the net.

Tomah coach Sarah Walters motivates her squad during a timeout.