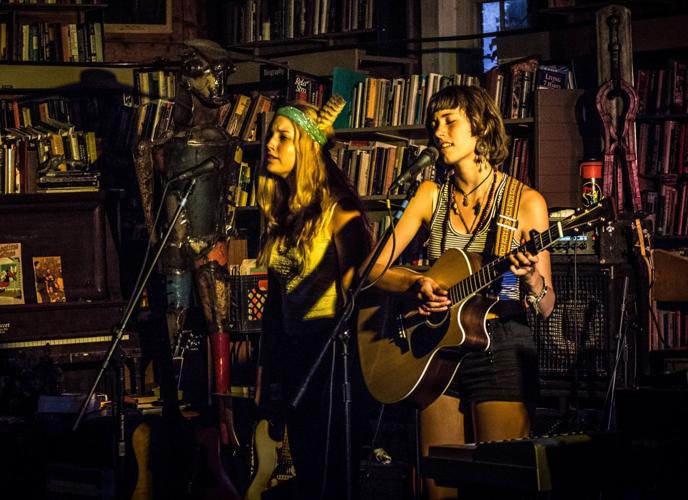 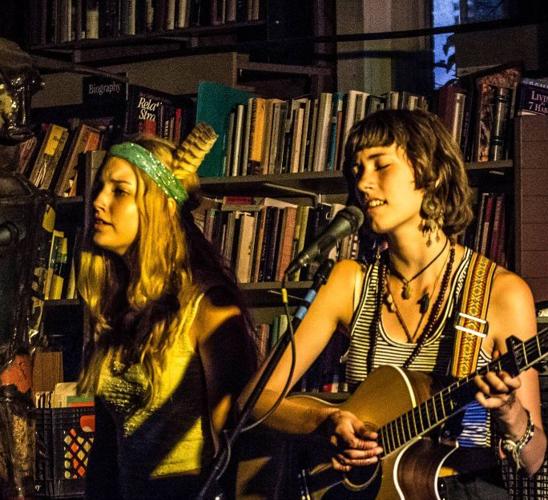 Lydia Turino For the Broadcaster

Driftless Books in Viroqua is what Eddy Nix, the owner, and most of his patrons would describe as a unique and intriguing space in the community.

Nix, 46, of Viroqua, dreamed up the idea of a bookstore about 11 years ago, but it has grown into more than he could have ever expected.

“From the beginning we had some little events, some poetry and a few different folk musicians... so it started out slow, and it was probably three years ago we really started thinking about it,” Nix said, referring to the events that have been happening at the bookstore. “A year ago... Cloud Cult did their show, so that was sort of the big one, and that allowed us to put the shelves on wheels and have a bigger space, and after that is was like, ‘Wow we can fit 200 people in here, cool.’”

Shawn Neary, 37, of Viroqua, is a previous employee of the bookstore and a musician.

When Neary first started working at the bookstore there were some events up and running. Nix had started small things, solstice banquets and barn dances.

However, Neary saw the potential of the place in a bigger way.

“It just screamed to be a place to have shows,” Neary said.

Besides being a venue to bring new bands into Viroqua, Driftless Books has become a place where youth can be seen and heard. The audience at the bookstore is attentive and interested in new things.

“It is a place where talent can be understood and absorbed and respected,” Neary said. “The air is sucked out of the room in a good way because of all the talent that is on display.”

A local two-girl band, Anima, comprised of Jaia Wilbour, 17, and Raina Gravatt, 18, both of Viroqua, has played seven concerts at the bookstore.

Both Wilbour and Gravatt are seniors at Youth Initiative High School in Viroqua.

They refer to the bookstore as their home stage.

“It’s awesome, I mean we love it, it feels like a home to us,” Wilbour said.

“It’s definitely the place I feel the most comfortable performing and I really love,” Gravatt said. “The audience is always really supportive, and there’s so many people I know.”

Both girls said they are lucky they can play at the bookstore.

“Even though it’s the place we’ve played more shows than any other venue, it’s one of the most unique and awesome venues to play that I’ve ever seen, so I just feel lucky that we get to consider that our home stage,” Wilbour said.

Anima has been performing for almost a year now, although before they had had other shows and they would frequent the Viroqua Farmers Market and open mics.

“It was 2004, and I moved back from California where I’d been living... I was just at this sort of midlife crisis in my 30s, wondering what to do,” Nix said. “I had been carrying around all these books, half of a truck full, and I figured I should just have a little bookstore.”

Nix did some searching online for other bookstores. He found and bought the inventory of a book warehouse in Connecticut. He spent three months packing up those books and drove them to the post office building in Viola.

Soon after he had everything unloaded into the post office a tornado came through Viola, damaging the building.

After the storm, Nix started looking for another building. He found the former main warehouse of the Viroqua Leaf Tobacco Co.

“...This place showed up, which was kind of a serendipity moment,” Nix said. “This guy who owned it just gave me the building. We’ll say a philanthropist. So, we moved everything here and started a bookstore.”

It seems Driftless Books was meant to exist in Viroqua, because things just kept falling into place.

“That’s been going for almost seven years here... I think in that time period we bought seven different bookstores that had closed,” Nix said. “One in Connecticut, one in Berkeley, Calif., one in Texas, three in Wisconsin. That all came together pretty well.”

However, no matter how serendipitous running the bookstore has never been, it’s never been an easy job. When asked what the hardest part of owning and running the bookstore is, Nix said, “The hardest thing is probably, you know, winters... That can be a drag.” Heating such a large building is a lot of work. Also, with so many books, it can be difficult to find specific books that people are looking for on a daily basis.

But owning and running the bookstore is something Nix loves.

“The best thing is definitely seeing people and having people come in every day and getting to meet all the people who live here, getting to represent Viroqua to all the tourists and be part of this really interesting thing happening here,” Nix said.

The bookstore captures the essence of the community and provides a space that is both diverse and comfortable to its visitors.

Making order out of the chaos

Eddy Nix got involved in the book business as a way to work through his self-proclaimed midlife crisis.

Lydia Turino is a 17-year-old senior at Youth Initiative High School. Her stories are the product of a four-week internship she did with the V…