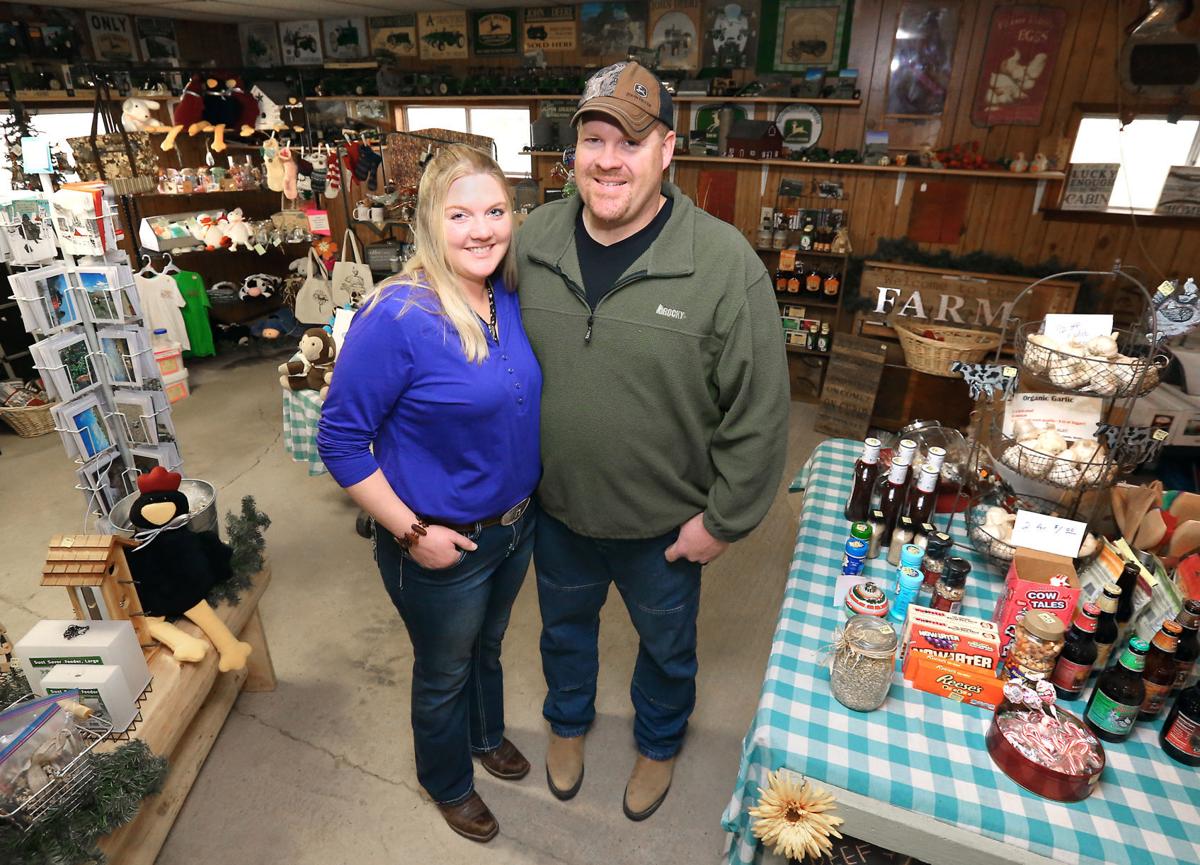 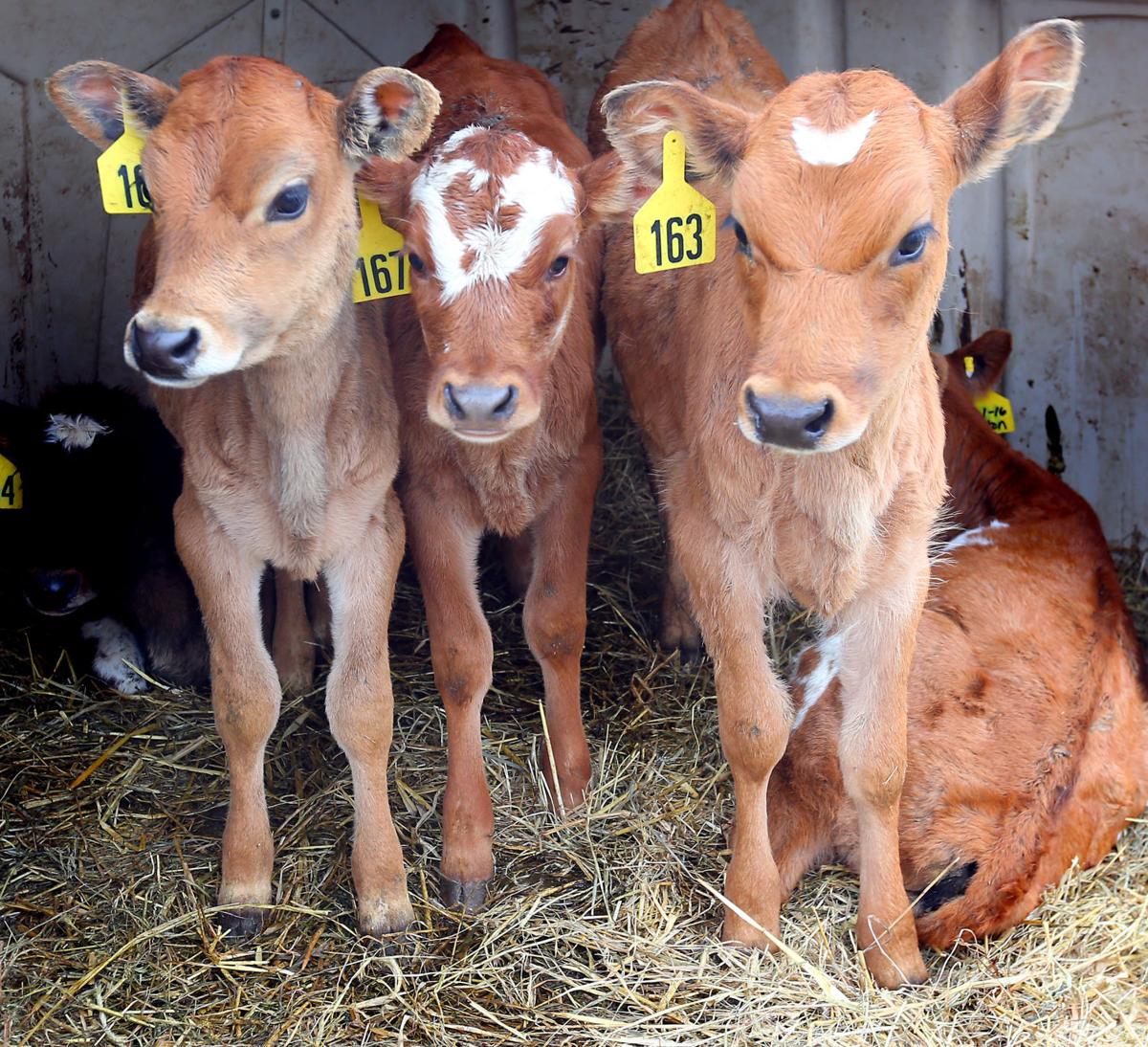 WESTBY — It’s off the beaten path.

But Danika and Nate Wehling say business has been good at their Wehling Farms and Country Store, which opened in August in a former garage on their organic dairy farm at S764 Jore Road about 5 miles northwest of Westby.

The new store sells beef, chicken, pork, eggs, honey, maple syrup, homemade soap and fresh produce, produced by area farmers including the Wehlings. Many of the products are organic.

Area Amish residents make soy candles and homemade soap sold in the store. It also has a large selection of greeting cards that Danika makes, featuring photos she takes of such things as calves and flowers on the farm and other scenery.

“My top-selling card is a chicken and cat together with tulips in the background,” she said.

The store also sells candy made by The Sugar Shack of Viroqua.

Much of the country store’s crafts and produce come from relatives.

For example, Danika’s mother, Kathy Gretebeck, etches designs and words onto glassware sold at the store, and also creates candy bouquets and bird seed wreaths that are sold there.

The store also sells pumpkins grown by another brother, Tucker Gretebeck and his wife, Becky, who operate Tucker and Becky’s Pumpkin Patch near Newry.

Wehling Farms and Country Store is open from 10 a.m. to 6 p.m. Friday through Sunday. “And if we’re here (at the farm), we’re open” at other times as well, Danika said.

The Wehlings also operate Wehling Farms & Repair, LLC, on their farm. That business repairs tractors and other farm equipment.

The Wehlings have operated their 70-cow organic dairy farm since 2005; they sell their milk to the Westby Cooperative Creamery. They also raise organic dairy steers, chickens that eat organic feed, and eggs. And they raise corn and hay for their livestock.

The couple decided to open a country store on their farm partly so people could buy smaller quantities of meat.

“I’ve always sold meat (animals) to people, but it was always for halves or whole,” Danika said. “I kept getting phone calls or requests on Facebook, asking if we had smaller quantities” of meat available.

So the state-licensed store sells such meat products as beef sticks, four kinds of bratwurst, two kinds of cheddarwurst, summer sausage, all-beef hot dogs, hamburger, steaks, roasts and stew meat. Most of the meat is kept in freezers in the store.

“Ninety percent of the meat is from our farm,” Danika estimated.

“Another reason (for opening the store) was my mom recently retired,” she said. “She loves making crafts, so I put her to work making crafts” that are sold at the store.

So Danika and Nate converted a garage on their farm to a retail store. It’s heated with a wood pellet stove.

“I enjoy the social part of it,” Danika said of running the store. “A lot of the people who come out here grew up on a farm. They have stories to tell about their own farm animals and gardens and things like that. I also enjoy being able to provide their families with good food.”

Both Danika and Nate were raised on dairy farms. Danika grew up on a farm just one mile away. Nate grew up on two farms, the first near Sumner, Iowa, and the second near Fall Creek, Wis.

They met while both were attending Madison Area Technical College in Madison and married in 1999.

WHAT: A country store on the organic dairy farm of owners Danika and Nate Wehling. It sells such things as beef, chicken, pork, eggs, produce, honey, maple syrup, homemade soap, candy and crafts.

WHERE: S764 Jore Road, about 5 miles northwest of Westby.

HOURS: 10 a.m. to 6 p.m. Friday through Sunday. The store also is open at any other time that the Wehlings are home.