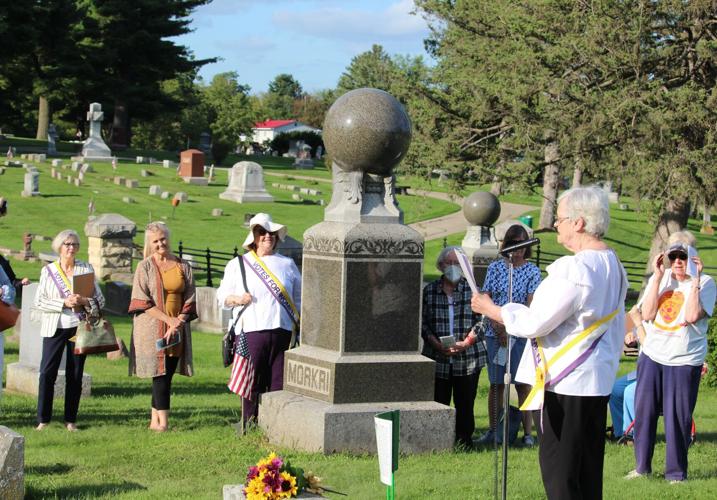 An audience gathers around Judy Gardner who is portraying Kate Goodell, a Vernon County woman who organized the Vernon County Political Equality League in 1912 with Tilda Omundson. Goodell and Omundson were honored Friday, Aug. 26, for their work with the suffrage movement in the county. 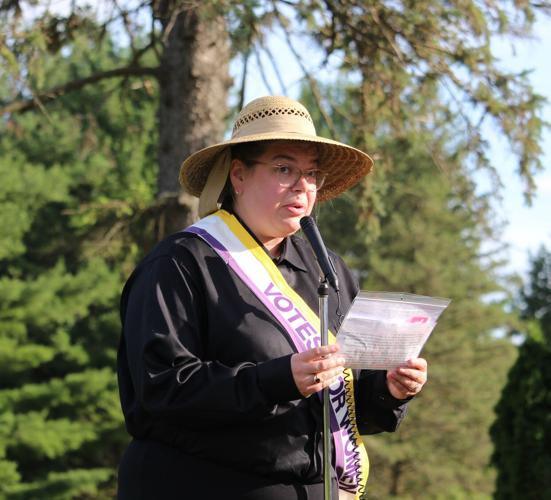 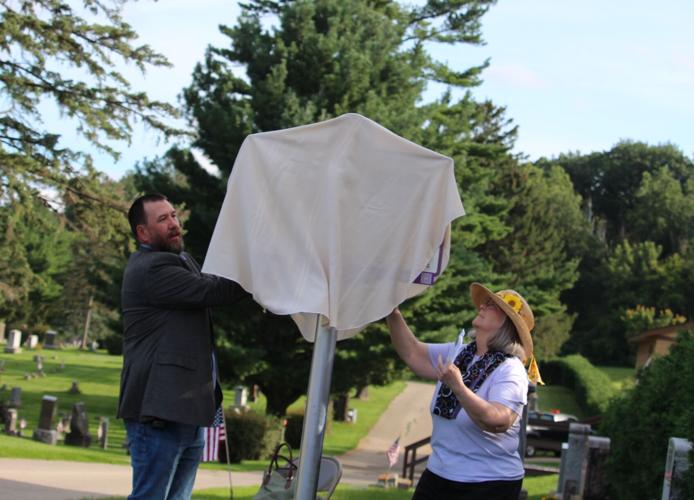 The Vernon County Historical Society (VCHS) and the Viroqua Women’s Literary Club (VWLC) celebrated Women’s Equality Day, Friday, Aug. 26, by dedicating a new marker in the Viroqua Cemetery that celebrates two of the many Vernon County women who were instrumental in the suffrage movement in the county.

Tilda Omundson and Kate Goodell are both interred in the Viroqua Cemetery. Omundson was a chiropractor and Goodell was a teacher. The women organized the Vernon County Political Equality League in 1912. The National Votes for Women Trail marker is located near the cemetery’s entrance and is one of the 2,370 markers sponsored by the National Collaborative for Women’s History Sites (NCWHS).

According to the website, The National Collaborative for Women’s History Sites “seeks to recognize and celebrate the enormous diversity of people and groups active in the struggle for women’s suffrage.” The trail marks the untold stories of suffrage in communities all around the United States.

Mayor Justin Running read a commendation letter from the Pomeroy Foundation. The marker that was dedicated in Viroqua joins a program of historic markers for about 250 women’s suffrage sites across the country. This program was funded by the William G. Pomeroy Foundation and the federal Women’s Suffrage Centennial Commission.

After Running read the commendation letter, he and Denise Kirchoff, event chairperson, unveiled the marker.

Honorable Judge Darcy J. Rood then shared some history about the passage of the woman’s suffrage amendment passed by Congress on June 4, 1919, and ratified on Aug. 18, 1920.

“We are here to honor Tilda Omundson and Kate Goodell,” Rood said. “They worked hard for their right to vote and our right to vote. Let’s continue to honor them in the future by voting. Voting is a right, not a privilege. When you do vote, think privately of Tilda and Kate and others (who worked for woman’s suffrage).”

Kirchoff said the Votes for Women Trail has a virtual map with the markers’ locations. Besides the Viroqua Cemetery marker, the Lucy Stone marker is also on this virtual map. The Stone marker is located in the Pioneer Cemetery, which is on Viroqua’s South Rock Avenue. It was erected in 1930 by Dr. Charles V. Porter in 1930 and marks the general area where suffragist and abolitionist Lucy Stone spoke on July 4, 1856 on these topics. Stone was a major voice in the national suffrage movement.

More information about the trail marker program can be found at www.wgpfoundation.org (use the Celebrate History tab) and nvwt.org.

Tilda Omundson was born in Springville in 1875. She graduated from Viroqua High School and worked as an educator throughout Wisconsin: first in Westby, then serving as a principal and teacher in Stoddard, and eventually teaching in Viroqua.

In 1924 at the age of 49, she attended and graduated from Palmer Chiropractic School in Davenport, Iowa. Her first practice was in La Crosse. She eventually returned to Viroqua, where she had a chiropractic business for 30 years.

Omundson served as secretary of the Vernon County Political Equality League shortly after it was founded.

She ran for mayor of Viroqua in 1934. Although she didn’t win the mayoral election, she was the first woman to run and be elected to the Viroqua City Council. She served three, two-year terms. She died in 1962.

Kate Goodell was born in Viroqua in 1877 and attended the University of Wisconsin-Madison. After graduation, she then became a teacher and assistant principal in Viroqua.

In addition to her role in founding the Vernon County Political Equality League with Omundson, she served as chairperson of the organization when it was first established.

Goodell made her way to California, where she died in 1951.

For the first time in its 17-year history, the Sole Burner of Chaseburg event has a husband and wife team serving as honorary chairpersons – M…

Sheriff John Spears reports the following ongoing activities for the year and narrative excerpts from the week ending Sept. 19.

The Viroqua School Board met Monday, Sept. 19, and received an update on the facilities referendum that will be on the Nov. 8 general election…

An audience gathers around Judy Gardner who is portraying Kate Goodell, a Vernon County woman who organized the Vernon County Political Equality League in 1912 with Tilda Omundson. Goodell and Omundson were honored Friday, Aug. 26, for their work with the suffrage movement in the county.