The A.J. Schneider Diamond at Lee Griffin Field and handicap accessible viewing platform will be dedicated at Kickapoo High School, Friday, June 11, at 4:30 p.m. A baseball game between Kickapoo/La Farge and Hillsboro will follow the dedication ceremony.

Schneider, who taught and coached at Kickapoo High School from 1963 until his retirement in 1987, died in October 2015.

Dave Hooker, who is on the three-person committee behind the project, said Schneider was a teacher, coach and inspiration to many in Kickapoo Area Schools, was a positive influence on everyone he came in contact with, and encouraged students. He added that Schneider had contracted multiple sclerosis and continued teaching and coaching despite physical limits.

Hooker said there are three reasons for the dedication of the diamond and viewing platform in memory of Schneider – one, there are no histories acknowledging the 55-year history of Kickapoo High School on the exterior of the campus (the district was formed in 1964 as a consolidation of the Viola, Readstown and West Lima school districts; the high school building was first occupied in 1966); two, there was no easy access to the baseball field; and three, “Schneider’s legacy deserves the honor.”

The idea for the projected was conceived four years ago, and Hooker approached the school board with the proposal three years ago. Money for the project was donated by past players and teachers, and friends of Schneider’s.

Hooker said the project was held up in 2020 due to the COVID-19 pandemic. Construction of the platform began in April of this year, and wrapped up a little over a week ago when the lines were painted. 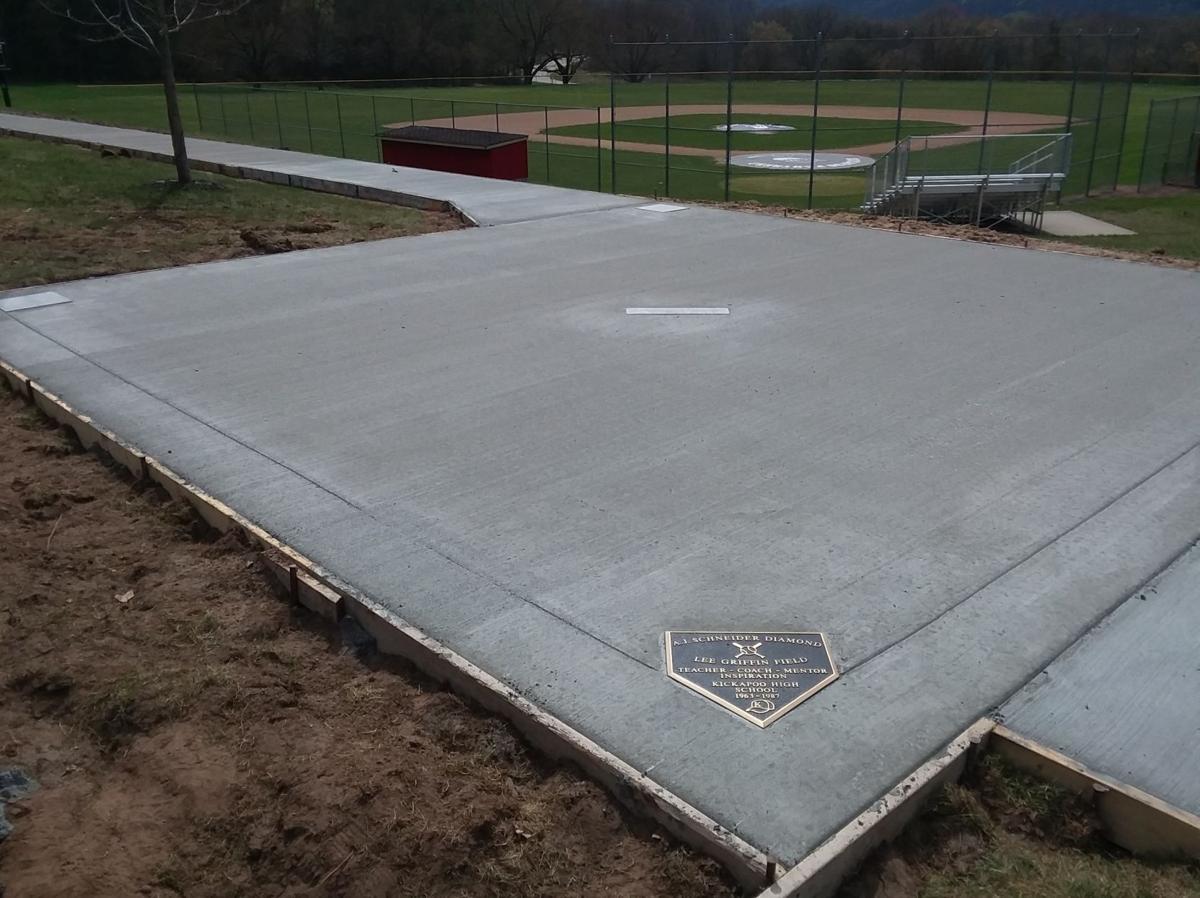 The handicap accessible viewing platform at Kickapoo High School is in the shape of a baseball diamond, and is located just above the ball field. 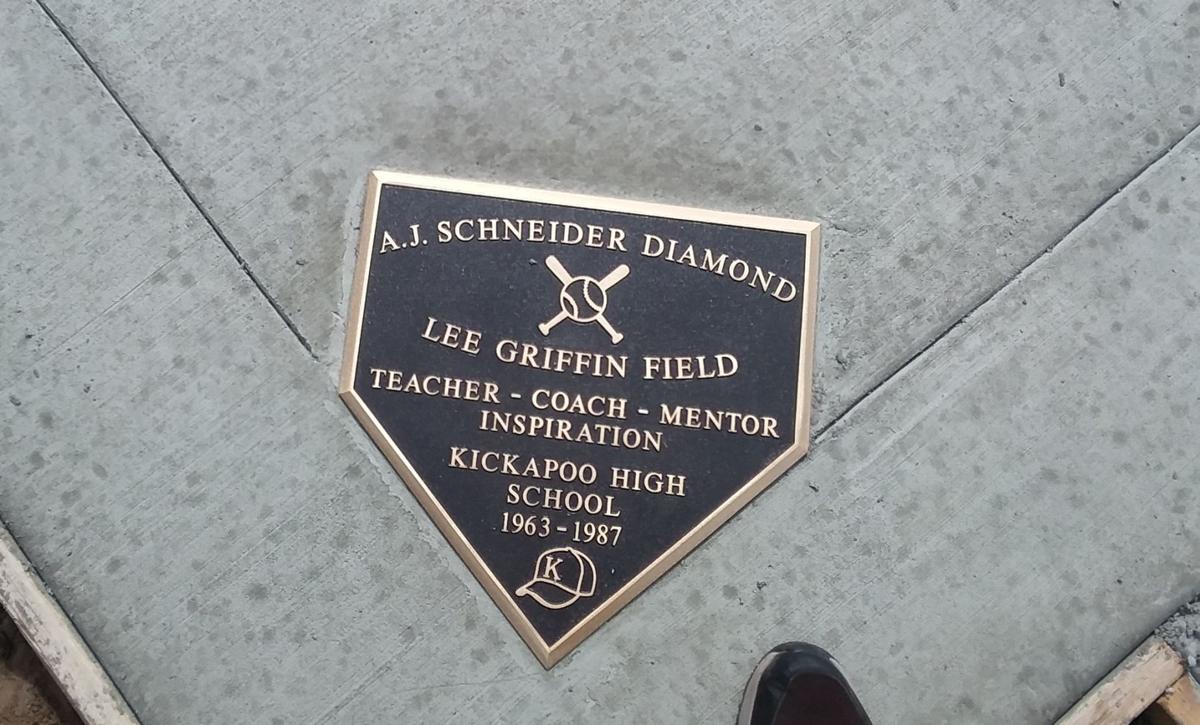 A bronze regular-size home plate is set into the concrete of the viewing platform at the A.J. Schneider Diamond at Lee Griffin Field at Kickapoo High School. 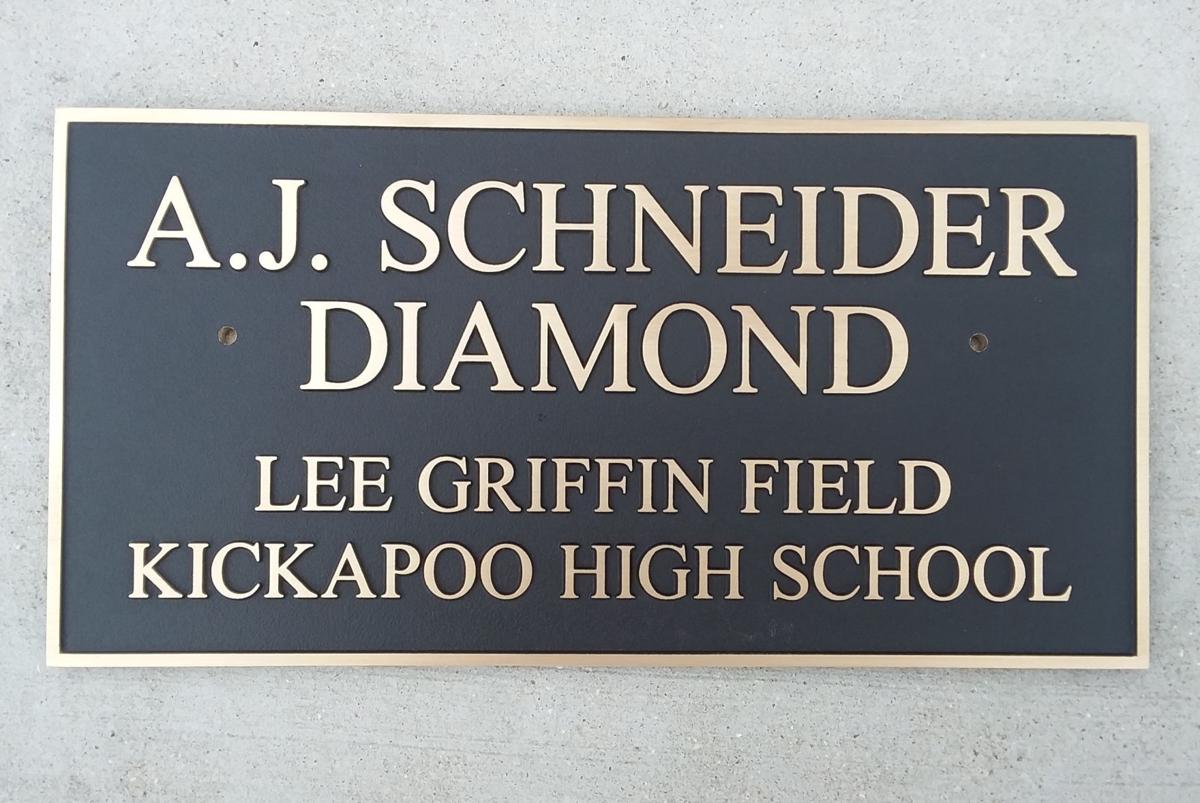 This bronze plaque will be permanently be affixed to the baseball diamond backstop fence at Kickapoo High School.