The School District of La Crosse has 211 fewer students than it did last year, the district’s steepest enrollment drop in recent history.

According to the district’s headcount, which is done annually on the third Friday of September, enrollment fell from 6,628 to 6,417 — a continuation of a yearslong downward trend.

And, for the first time in many years, the district lost more students than it gained through open enrollment, officials said.

“We’ve been a declining enrollment district for quite some time, but last year, we graduated a very large senior class. We lost about 100 students just from that,” said Patty Sprang, executive director of business services for the district. “We’re just not getting large enough classes coming into the lower grades to keep our numbers high, and that has a lot to do with the aging population and the low birth rate.”

La Crosse lost 19 more students than it gained this year, though not because other districts snatched them up.

“A majority are turning to virtual (education), so they’re not even going to another brick-and-mortar school,” Sprang said.

These numbers could add up to one big problem for the La Crosse school district, because the state uses enrollment to determine how much funding districts should receive. The current formula takes districts’ average enrollment over the previous three years.

“Because we’re such a large district with so many schools, we have to look at where we can reduce staffing while still keeping our class sizes small,” Sprang said. “This is a severe decline, and if it continues, we’ll have to look at buildings and spaces that students aren’t using, too.”

The School District of Onalaska, meanwhile, recovered from a sizeable enrollment drop of its own in 2018. After losing 51 students last year, the district regained 42 students this year, for a total enrollment of 3,170.

Before last year, the district had been on a steady climb since at least 2011, when enrollment was 2,986. 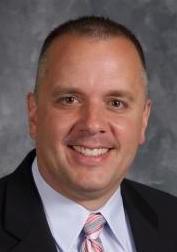 Kent Ellickson, Onalaska’s director of finance and business services, said the district is benefiting from development and population growth, but not as much as it could be. Many students live in Onalaska but go to school in Holmen, because of district boundaries.

Enrollment should be relatively stable in the short term, “but perhaps the long term will not be as stable,” Ellickson said.

In Holmen, years of steady enrollment growth have come to a halt, at least for now.

The district lost 77 students from last year, due to a large graduating class and a small kindergarten class.

District administrator Kristin Mueller said she expects the dip to be an anomaly.

“We overestimated our kindergarten enrollment, and we’re currently looking into why that might be,” said Mueller, noting that fluctuation can be caused by families moving in or out of the district, by a miscalculation of school-age children, or by a mix of other factors.

Mueller said the district’s projections should become more accurate after the 2020 U.S. Census. Rapid development and population growth have helped Holmen’s schools grow and flourish, but the boom has also made it more difficult for the district to predict its enrollment.

“We have lots of development going on in Holmen, but it’s important to know what age group is moving in,” Mueller said. “What type of families is it drawing, and do they have school-age children?” 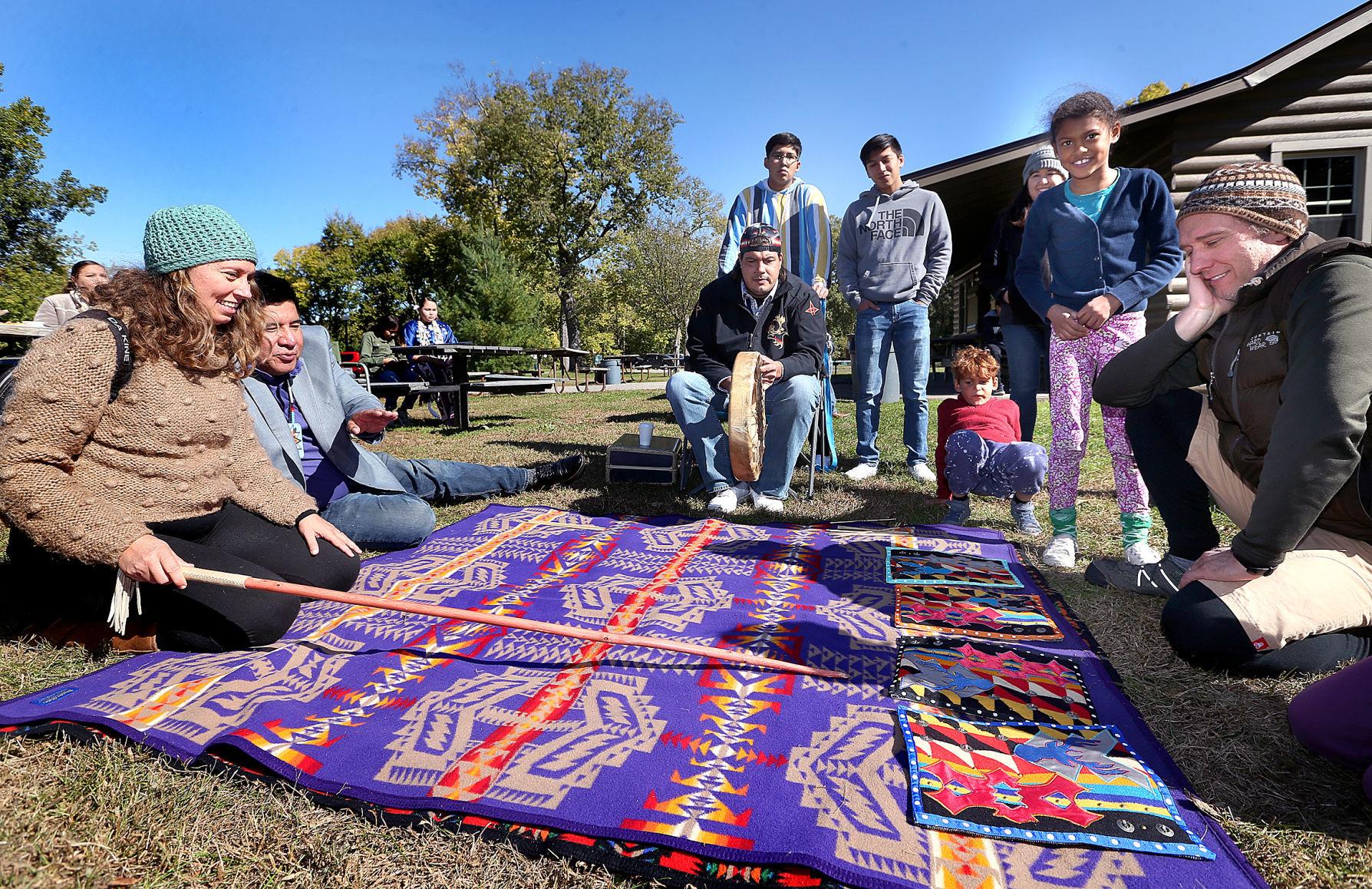 A group gathers for the moccasin game, a gambling game once played by many Native American tribes, at Myrick Park during Monday’s Indigenous Peoples’ Day celebration.

Members of Ojibwe and Ho-Chunk, among others from the La Crosse area, celebrated and shared their heritage Monday with attendees of the second Indigenous Peoples Day Celebration in La Crosse.

During his speech, Kabat said the Ho-Chunk were subject to seven removals from the area, starting in 1829, and were forced to hide before returning to the homeland. 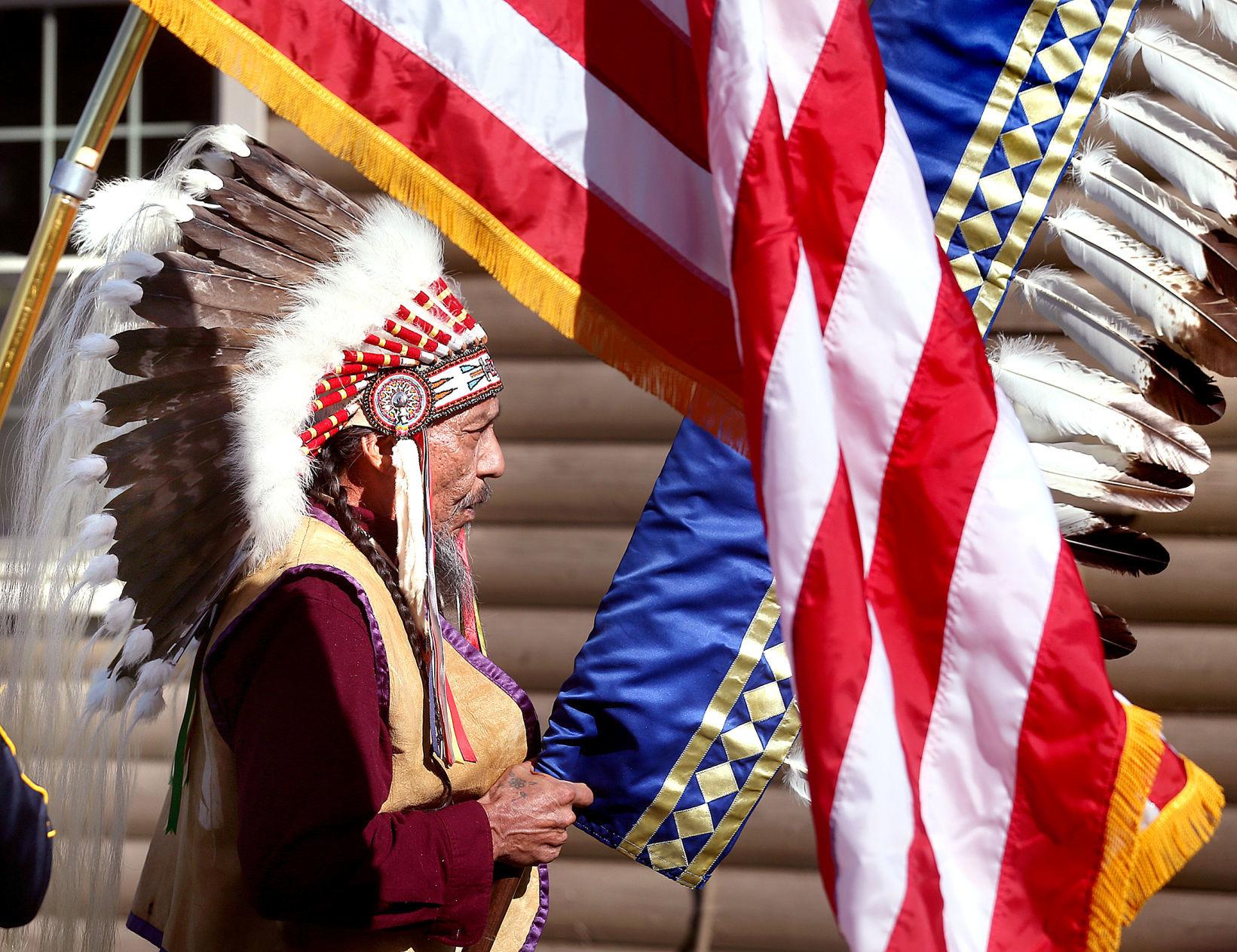 Levi Blackdeer of Onalaska, a Vietnam War veteran and member of the Ho-Chunk Nation, wears a traditional headdress as he presents the colors with an honor guard Monday during the opening ceremony for La Crosse’s first Indigenous Peoples’ Day celebration at Myrick Park.

The city and school district chose to honor the city’s indigenous roots and history instead of Italian explorer Christopher Columbus, a man whose life included violence and enslavement of indigenous people.

Last year, it was announced that city would recognize the second Monday of October each year as Indigenous Peoples Day.

Tables were set up in the Myrick Park Center for people to share and sell items they made. Indigenous food samplings, hide-tanning demonstrations, music, and lacrosse and double ball matches were part of the celebration.

Debra Cloud, a member of the Ojibwe nation, was excited to see the holiday change from Columbus Day to Indigenous Peoples Day. 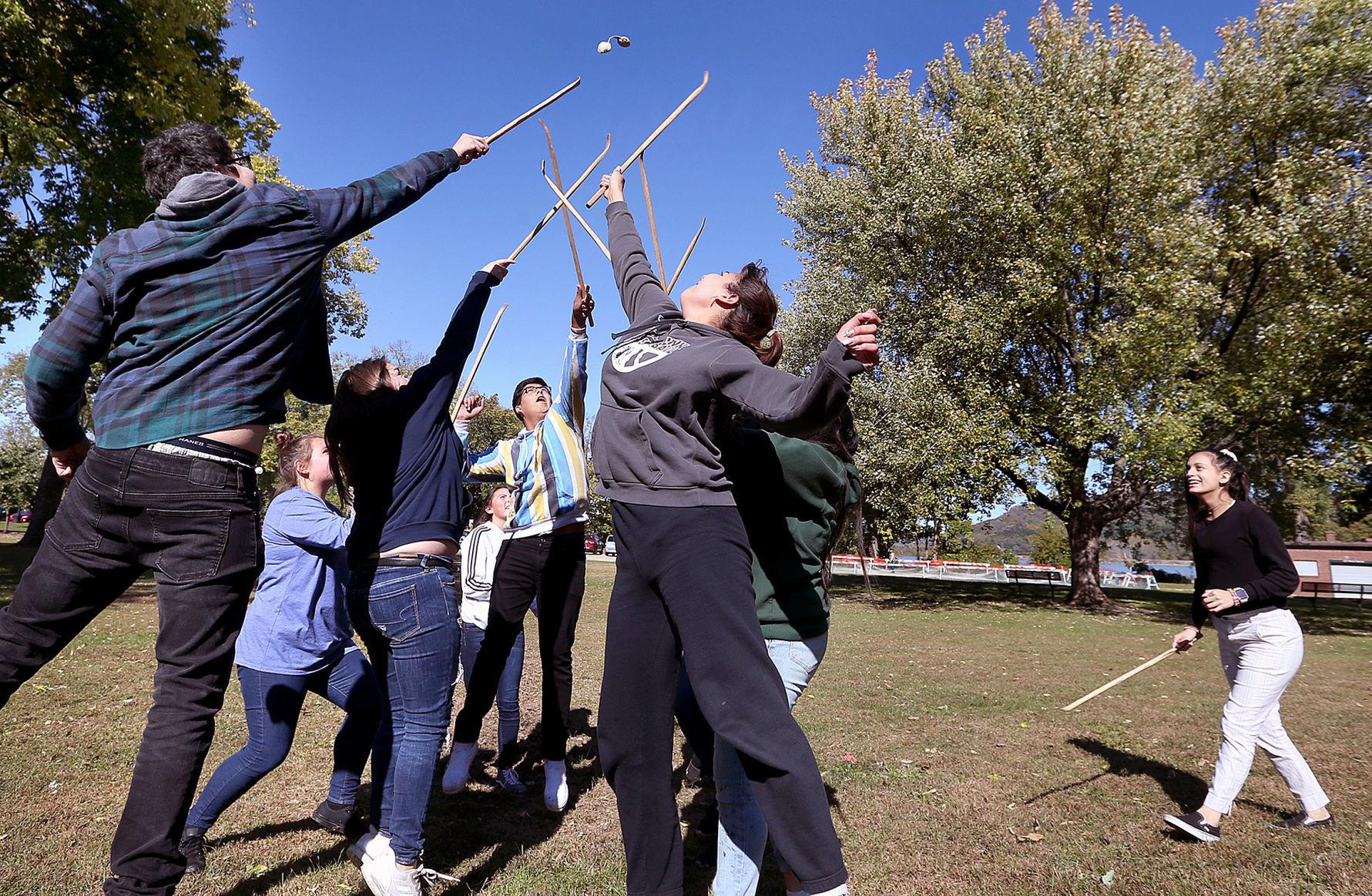 “I love it, I never thought I’d see this day,” she said. “I’ve always wished for something like this, it’s here, and I’m here to see it.”

She shared quilts that she started making by hand decades ago.

“I started making these dresses for Native American dolls because you don’t see Native American dressed dolls out there. If there are, they’ve always got buckskin, and it’s the wrong perception of who I am,” she said. 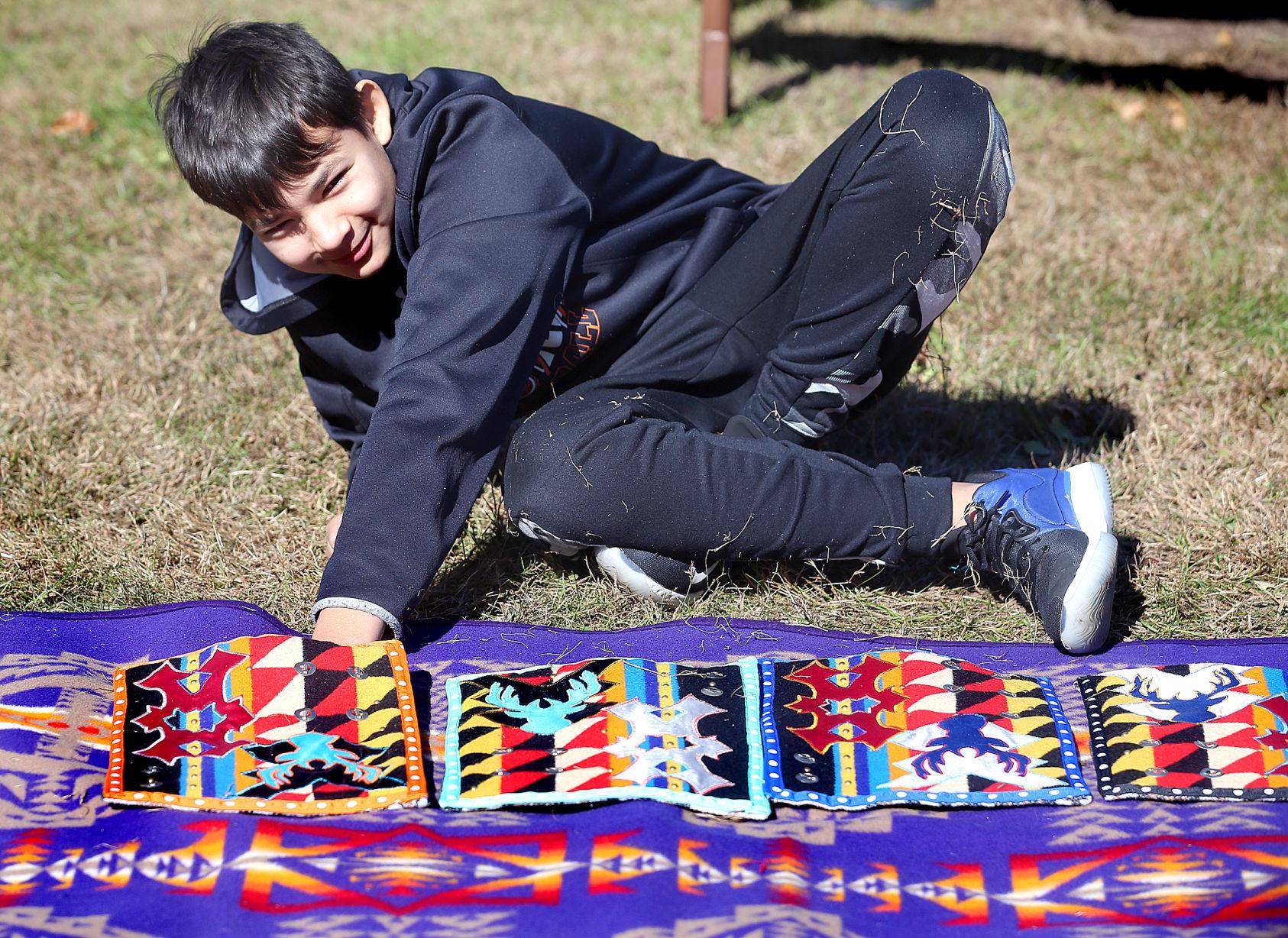 Her mother taught her how to make traditional Ho-Chunk dress, which is worn during celebrations such as the medicine dance as well as powwows. She began making dresses for Springfield Dolls to teach her oldest granddaughter about her Ho-Chunk heritage.

“She lives in California, I don’t know her, and she doesn’t know me. We do (know each other), but she was raised by her mother out there,” she said. “The first dress I ever made was made for her … from a distance I was trying to teach her about her Ho-Chunk heritage because she knows so little about it.”

White wrote a story for a doll she named Henu, which means “first daughter,” put the homemade dress on her and gave it to her granddaughter. “I wanted to share my tradition with her,” she said.

Patricia and Cleo Good Bear, members of the Ho-Chunk nation, shared their beadwork and dried corn, which they take off of the cob and dry in the sun. They’ll use it to cook or make soups. 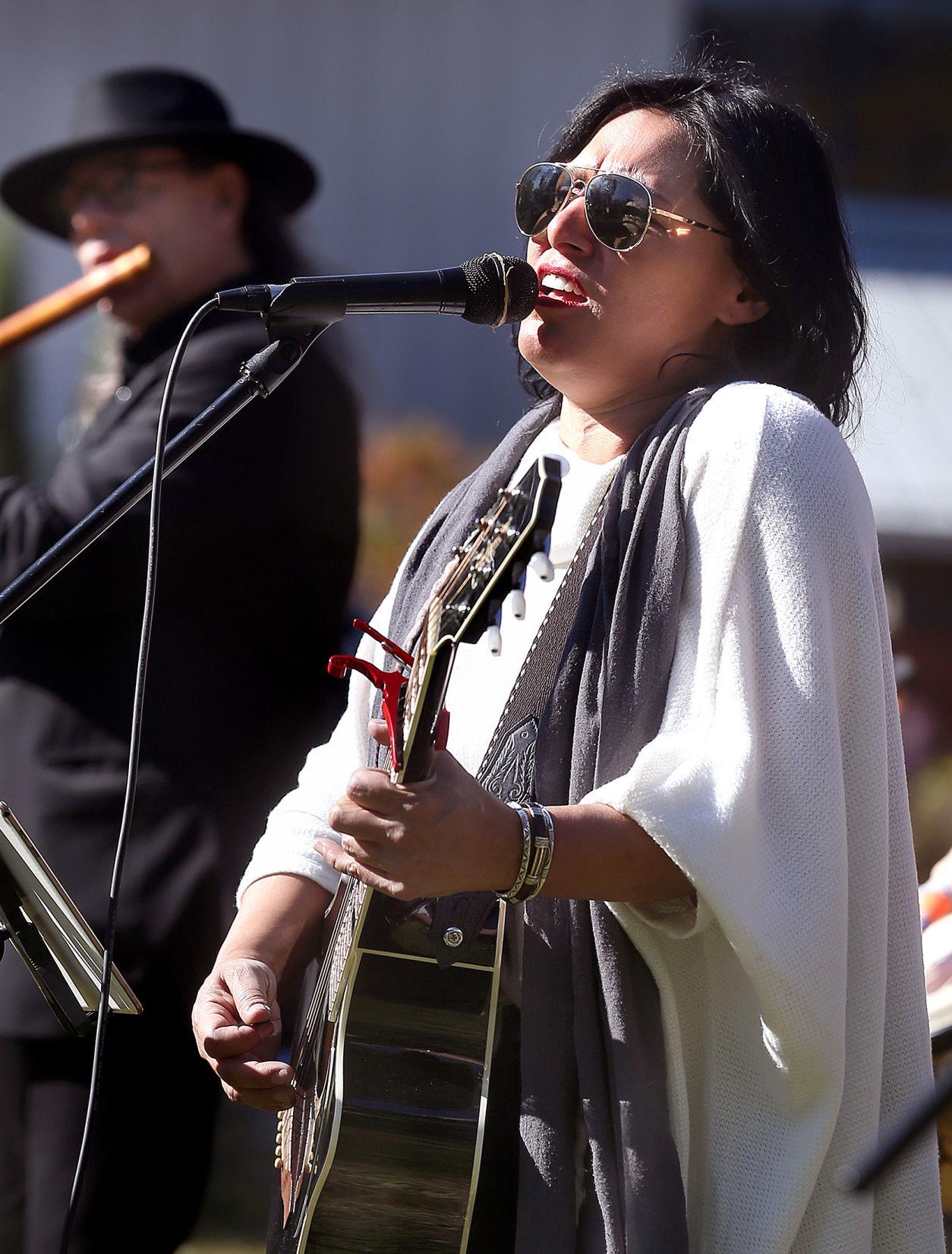 Levi Black Deer and his wife, from Onalaska, demonstrated how to tan buckskin using the brains of animals. Their goal is to educate the public on the method of tanning used by Ho-Chunk.

Today, hide tanning is done commercially with chemicals, but Black Deer’s method is chemical-free, and uses water and a lot of muscle, he said.

The School District of La Crosse and the local Ho-Chunk Nation’s La Crosse Youth & Learning Center are coming together to strengthen years of collaboration.

“I love it, I never thought I’d see this day,” she said. “I’ve always wished for something like this, it’s here, and I’m here to see it.”

Debra Cloud, a member of the Ojibwe nation 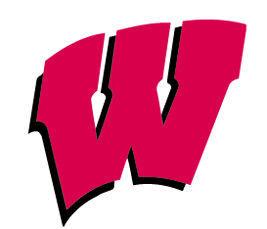 A La Crosse man turned himself in Sunday after vandalizing the Dahl Family YMCA in La Crosse Friday morning.

Peyton D. Nett, 19, admitted that it was him in the video, but said he doesn’t remember going to the YMCA because he was intoxicated, according to the La Crosse Police Department.

Nett drank four to five rum and Cokes on Thursday night before going to the Twisted Moose with friends and drinking more, according to the police report. He blacked out and doesn’t remember anything after that, he said; however, surveillance cameras show him walking around downtown.

Surveillance video at the YMCA shows Nett at about 4:20 a.m. Friday walking through the lobby and tearing the computer monitors off the desk, then throwing each one. There was paint all over the floor, walls, desks, TV screens and computer monitors in the Primetime Center — an area for older children to do crafts and play games — and damage to furniture. Police also noted a clear footprint in the paint on the floor. 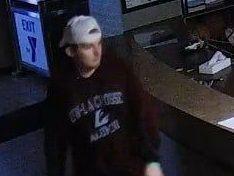 Surveillance video captured this image of the person who vandalized the Dahl Family YMCA in La Crosse early Friday.

The next morning, Nett, a student at UW-La Crosse, went to Fond du Lac to visit his family. Friday evening, a friend sent him a link to a news story about the break-in after recognizing Nett, according to the report.

At about 7:45 p.m. Friday, Nett’s mother called the La Crosse Police Department and told them the vandal was her son, and then handed the phone to Nett, who arranged to turn himself in when he was back in town Sunday.

Nett went to the La Crosse Police Department at 5:20 p.m. Sunday and told authorities it was him on the surveillance video. He was interviewed and then released on a signature bond.

The facility, located at 1140 Main St., opened three hours late, at 8 a.m., as YMCA staff dealt with the break-in.