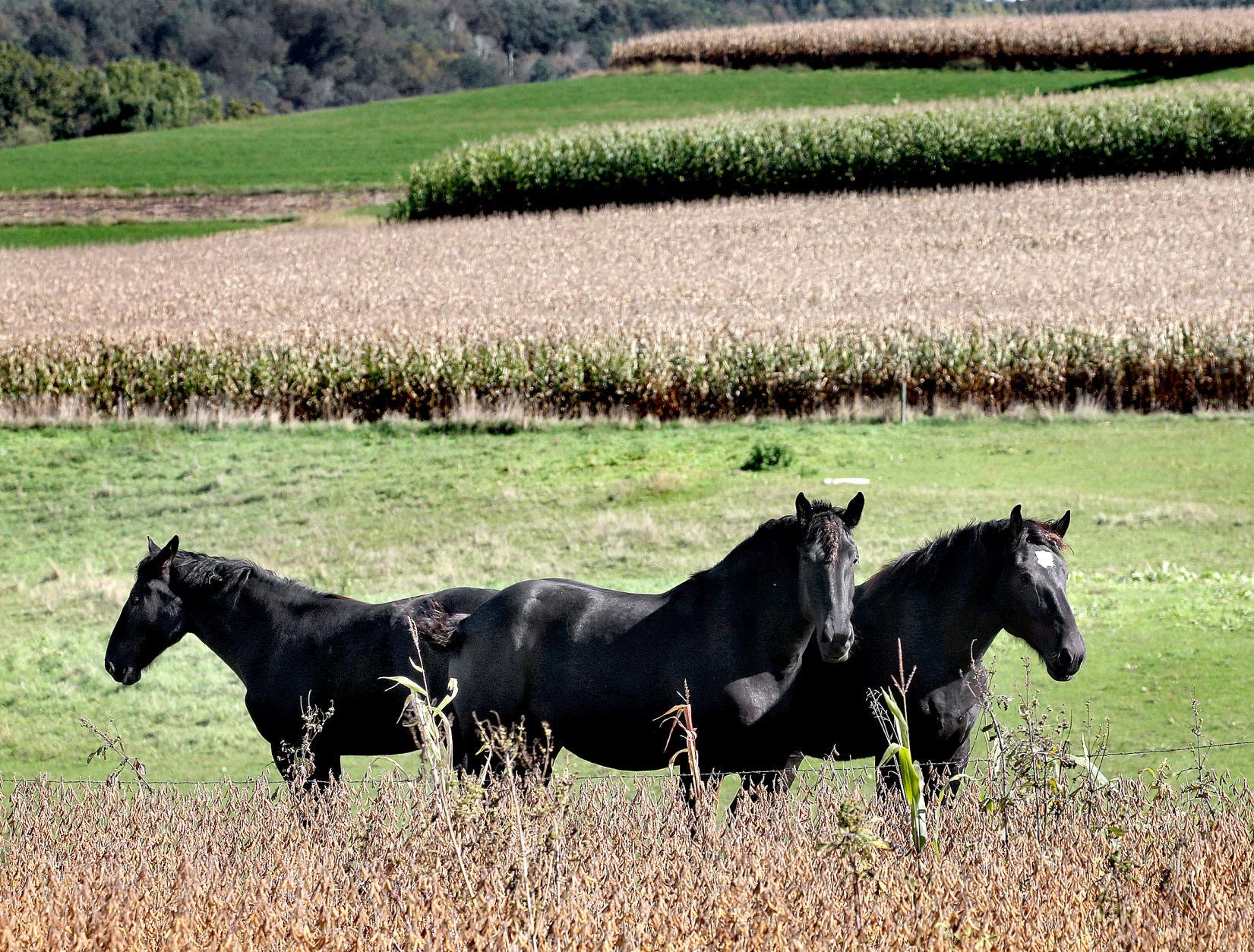 Horses pass the sunny day on a pasture Tuesday in northern La Crosse County. The forecast calls for more sunny skies on Wednesday with a high temperature of 72 degrees in La Crosse.

BRAINERD, Minn. — Marv Stroschein and his Crow Wing County, Minnesota, landfill crew poured gallons of kerosene onto a huge pile of cordwood in an incinerator the size of a shipping container, then tossed in a road flare to light it up.

Supercharged with oxygen, temperatures inside the massive open-air incinerator top out at 2,300 degrees Fahrenheit. Stroschein needed at least 1,000 degrees — near the melting point of aluminum — to kill what he was hunting this day: prions, the deformed brain and nerve cells of deer carcasses infected with chronic wasting disease.

Since chronic wasting was discovered in the county earlier this year in a wild deer — the first wild deer case confirmed outside of southeastern Minnesota — Crow Wing officials have struggled for answers to the mess they believe is coming: disposing of thousands of infected or potentially infected deer carcasses.

Burning carcasses is inefficient, time-consuming and incredibly unsustainable. But after months of negotiation between the state Department of Natural Resources, county landfill officials and the Minnesota Pollution Control Agency, it’s the best anyone could do.

The central-Minnesota county offers a look at the nightmare challenges some Minnesota communities may soon face as they struggle to keep the disease in check and control the environmental contamination.

They’re discovering there is no perfect, affordable way to dispose of deer carcasses potentially infected with chronic wasting disease.

‘Cover it up and we’re good’

First found in wild herds in southeastern Minnesota in 2016, chronic wasting is a death sentence for the animals who contract it. There’s no cure for the brain disease and no vaccine. The life expectancy of a CWD-positive deer is about two years.

At a minimum, there’s a fear it could destroy Minnesota’s $1 billion annual deer-hunting industry. While there’s currently no known crossover of the disease to humans, experts worry it could eventually jump species and find its way to humans.

So, the need for a scientifically sound way to dispose of carcasses is critical.

Burning deer bones is relatively new in Minnesota. Most hunters just toss carcasses out in the woods when they’re done processing the meat.

But tossing out deer bones is risky where chronic wasting disease is present.

Prions are extraordinarily stubborn in their survival. They can linger for years in the soil long after their hosts are dead, contaminating other deer and the environment around them.

In the last legislative session, Minnesota lawmakers created a deer dumpster program to remedy this problem.

They set aside $50,000 to place special plastic-lined dumpsters in chronic-wasting-infected areas, lifting the idea from Wisconsin landowner Doug Duren, who theorized that if hunters threw their carcasses into dumpsters, they wouldn’t throw them out onto the landscape and the disease might not spread so fast.

It’s turned out not to be so simple.

Carstensen was put in charge of emptying the deer dumpsters.

It was easy to do in southeastern Minnesota, where chronic wasting disease has existed for years. There was already a massive industrial incinerator to deal with animals taken in federal culling efforts.

By law, hunters have to either leave the carcasses exactly where the animal was shot, or bring them to a deer dumpster.

“When it comes to burying weird things, landfills and the Pollution Control Agency already have a process,” Carstensen said. “I though they were just going to bury the deer on a dedicated spot on the landfill, put clay-lined materials down and cover it up and we’re good.”

But Stroschein turned her down. And thus began a monthslong negotiation.

Stroschein — a careful man who’s been in the landfill business for 37 years — told Carstensen he couldn’t live with himself if he took an infected deer and then allowed prions to escape into the environment.

It’s an understandable position. Prions are famously hard to neutralize. They can pass unharmed through the digestive system of a predator, withstand up to 1,000 degree temperatures and exist on the land for many years.

Carstensen showed him scientific studies proving that it’s safe to bury infected deer in conventional landfills. He showed her the 40-acre field where he sprays wastewater from his trash pits.

He said he worried prions would get onto the grass and then back into wild deer.

Carstensen suggested he just fence in the irrigation zone. He built the fence, but still worried it wasn’t good enough. The negotiations spawned a work group of stakeholders. They had meetings. They brought in medical and prion experts.

Carstensen looked into trucking the dumpsters to a landfill in the next county over, but officials there were nervous, too. They wondered if Crow Wing knew something they didn’t.

“I thought, ‘Oh no! We’re screwed!’” Carstensen said. “We’re going to be like Wisconsin.”

Wisconsin is a perennial example of how not to handle CWD. In some parts of the state, half the deer are infected.

Even after decades of fighting the disease, Wisconsin’s system for disposing of infected animals is woefully inadequate. Duren’s deer dumpster program is still tiny, and once the dumpsters are full there are very few places to empty them. In all of Wisconsin, just 13 landfills accept deer waste.

Wisconsin DNR solid waste coordinator Dan Kroll said it didn’t used to be that way. But recently, a few private landfills announced they were no longer accepting carcasses. They were afraid of being held liable for escaped prions. After that, dozens of others got spooked.

“We just had our two biggest landfill operators back out,” he said. “They don’t take deer anymore.”

In some parts of the state, hunters now have to drive 80 miles to get rid of their bones. Kroll said they don’t do it. They either throw their carcasses in rural ditches or smuggle them into prohibited landfills disguised as household trash.

Carstensen didn’t want the same thing to happen in Minnesota.

If a single landfill turned down deer carcasses, she worried the rest would fall like dominoes. Finally, weeks before the opening of archery season, she offered to give the Crow Wing landfill a 15-year-old, disused DNR incinerator, and the landfill took it.

“It’s overkill,” she said, “But landfill operators talk to each other.”

The best way to get rid of CWD-positive material, is with an alkaline hydrolysis digester. The veterinary wing of the University of Minnesota has one in St. Paul to dispose of infectious animal carcasses.

It’s basically a giant pressure cooker full of lye. Infected meat and bone go in. Inert slush comes out. But digesters are incredibly expensive. It’s not a solution that could be scaled up to handle thousands of deer.

For Crow Wing County, the safest, most practical solution was to build a giant, controlled inferno.

Still, the incinerator itself has been plagued with technical issues. The first burn was a disaster, Stroschein recalled.

“There was all this water in the dumpster,” he said. “Mixed in with the deer, it basically put out the fire. The blower barely got it going again.”

The second round went a bit better.

In late September, however, he and the landfill crew loaded up the incinerator with wood for their third deer burning attempt and the fire didn’t want to start.

The flare they’d tossed in went out before the cordwood ignited. Stroschein’s son Tim had to climb up on the machine with a propane torch to get it going. A little later the blower stopped working. The diesel engine was out of fuel, or maybe just broken. No one was sure.

When they did get it running, the bone delivery truck slated to bring 12-cubic yards of possibly infected deer spines and heads from a processing facility in Emily, Minnesota, was nowhere to be found.

Stroschein made calls and paced around as the fire burned.

Stroschein said the system will get more efficient over time. It’ll have to.

Chronic wasting disease is still spreading. In the years to come, more deer carcasses will likely be heading to more landfills, and four cords of firewood per deer is not a scalable ratio.

“When it comes to landfills and carcass disposal, scalability is a huge issue that needs to be addressed,” said Michael Osterholm, director of the University of Minnesota Center for Infectious Disease Research and Policy. “How do we — in a CWD positive area — best dispose of these carcasses? There’s a lot more work that needs to be done.”

Osterholm is among the experts who worry that chronic wasting will find its way to humans the way “mad cow disease” in the United Kingdom became variant Creutzfeldt-Jakob disease.

“There are a lot of challenges in attempting to deal with carcasses of CWD-infected deer,” Osterholm added, “but I’m confident that Crow Wing County is doing as well as anyone could.”

Strochein said he’ll burn roughly 5,000 deers-worth of bones and heads this hunting season alone at the Crow Wing landfill. He’s determined that chronic wasting will not spread on his watch.

“Nothing’s getting sick from these carcasses when we’re done with them,” he said.