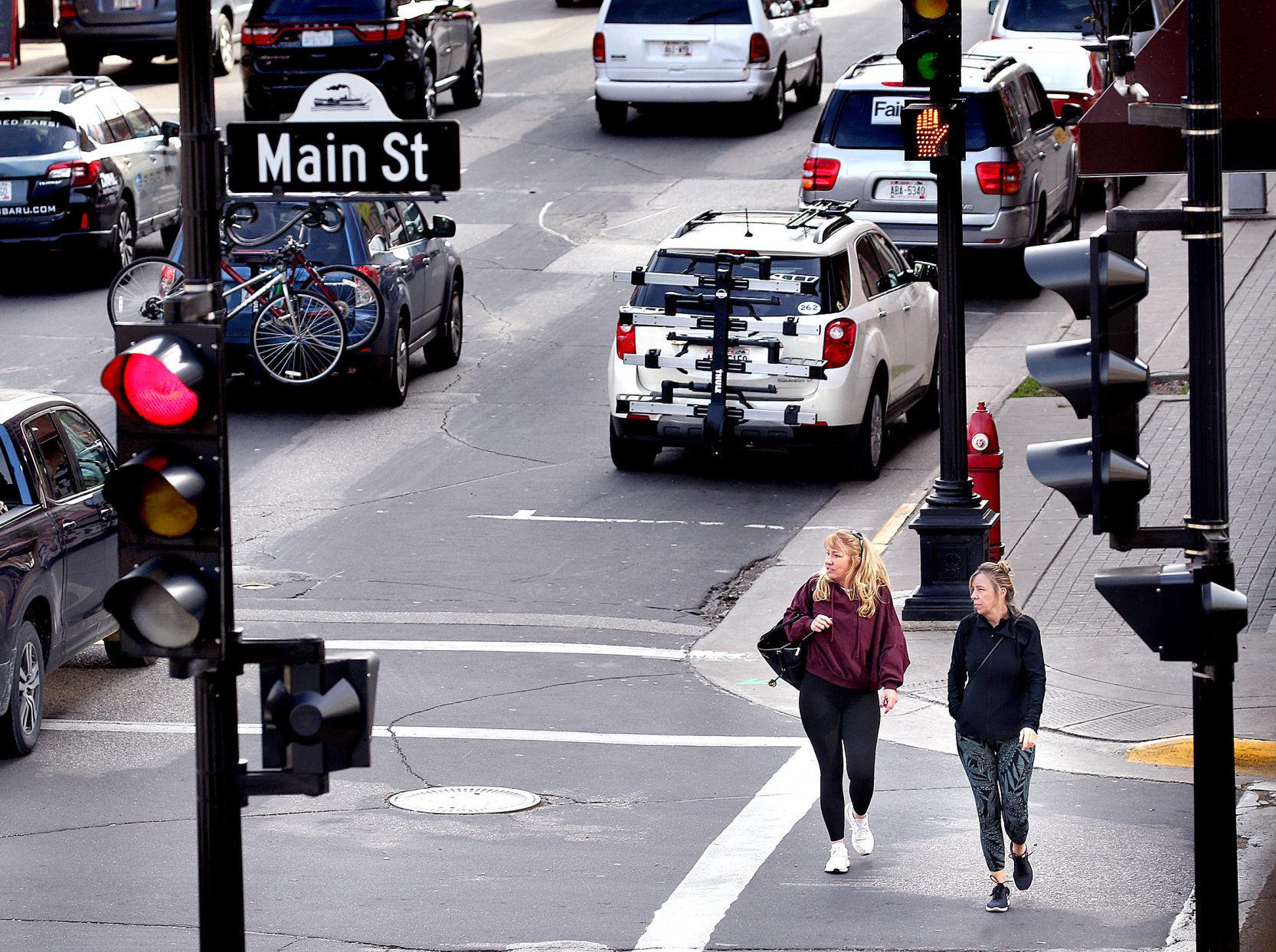 Pedestrians cross Main Street Wednesday as rush hour traffic moves through downtown. La Crosse is receiving a $440,000 state grant to fix and replace traffic and pedestrian signals across the city in 2020.

The city of La Crosse was tentatively awarded a $440,000 grant by the state to fix or replace 12 of the 60 traffic signal cabinets or signal controllers within the municipality in 2020.

The city received multiple complaints about the walk light and traffic signal outages, specifically at Jay and Third streets in downtown La Crosse.

Half of the lights meant to direct foot traffic through the intersection have been out since the city’s most recent cold snap in February.

Currently, there are four work orders related to the cross lights at the Jay and Third street intersection, but the city hasn’t been able to get to the project due to time, weather and budget constraints, said Matthew Gallager, La Crosse’s deputy director of engineering and public works.

Once the state-granted funds are released, the city will replace signal cabinets and signal controllers that were damaged by weather and age, thus restoring the walk lights and signals across La Crosse to their former glory.

“What we’re looking at throughout the whole downtown is doing a pretty big upgrade over the next few years of several signals” including the Jay and Third street intersection, Gallager said. 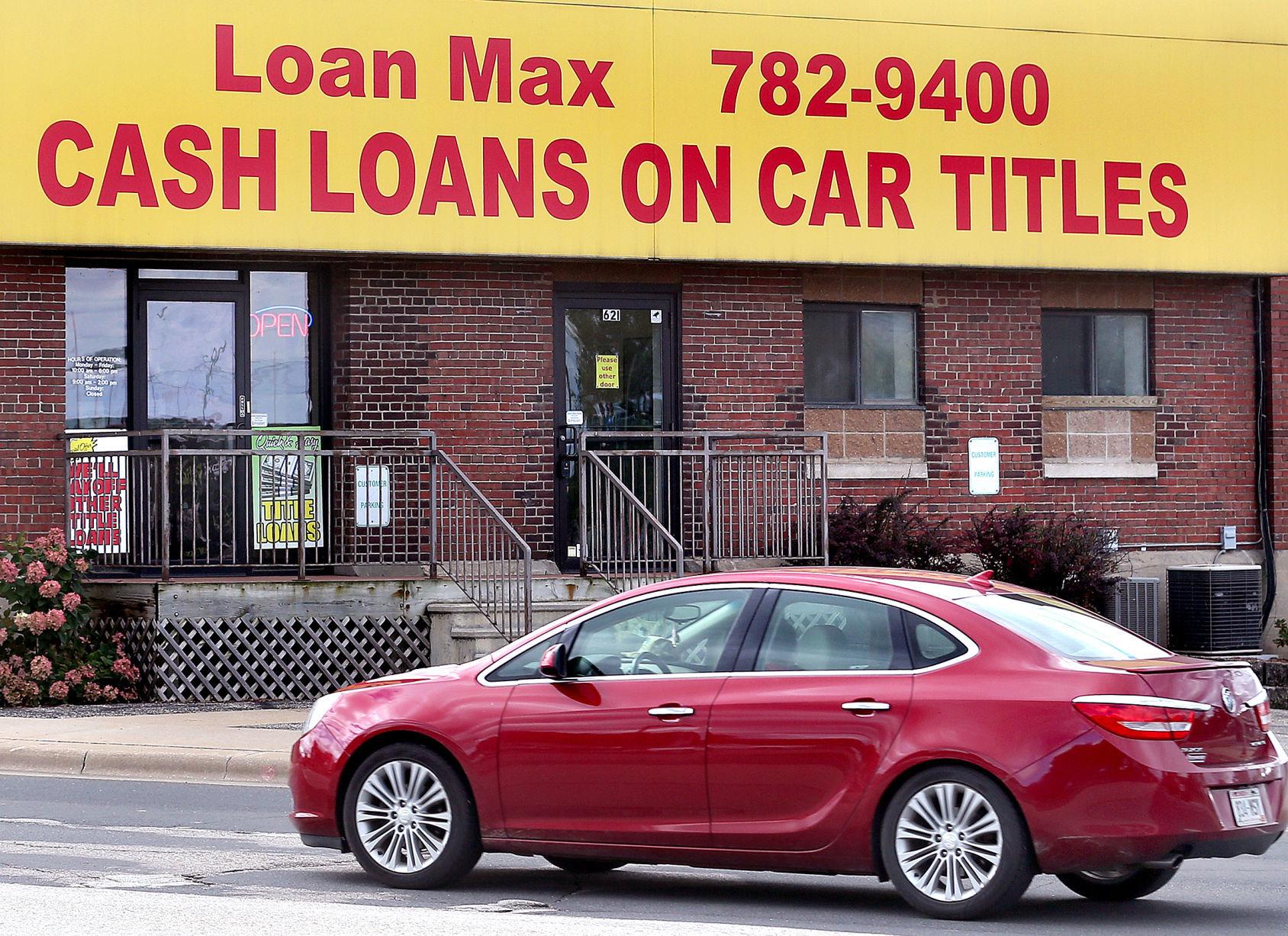 The city has until Oct. 11 to decide whether to purchase the land at 621 N. Third St. The building there is home to a title loan business.

The age and condition of the existing signal equipment varies throughout the city. Some of the current signal infrastructure hasn’t been updated since the 1970s, while some of the more recent equipment was installed in the last five years, Gallager said.

Prioritizing which equipment will be replaced and updated is a part of the city’s Capital Improvement Budget, which is voted on annually. The engineering department will make recommendations on what needs to be improved or replaced but, ultimately, it’s up to the Common Council.

If residents wish to report a signal outage or another problem to the city, they can do so at cityoflacrosse.org/portal. Their submission through the online portal will directly create a work order that is then documented and filed with the applicable department within the city. The quickest way to report a problem, however, would be to call the city directly, Gallager said.

“You can get a live person on the phone,” he said.

Each department then prioritizes which projects can be completed first based on the existing workload and available resources.

“It depends on what the request is,” Gallager said.

If it involves equipment that can take a long time or high cost to obtain, that has to be balanced with other emergency needs as well as annual construction and seasonal projects scheduled throughout the city.

“It’s up to each department to then respond and assign and prioritize those tasks as best as they can,” he said. 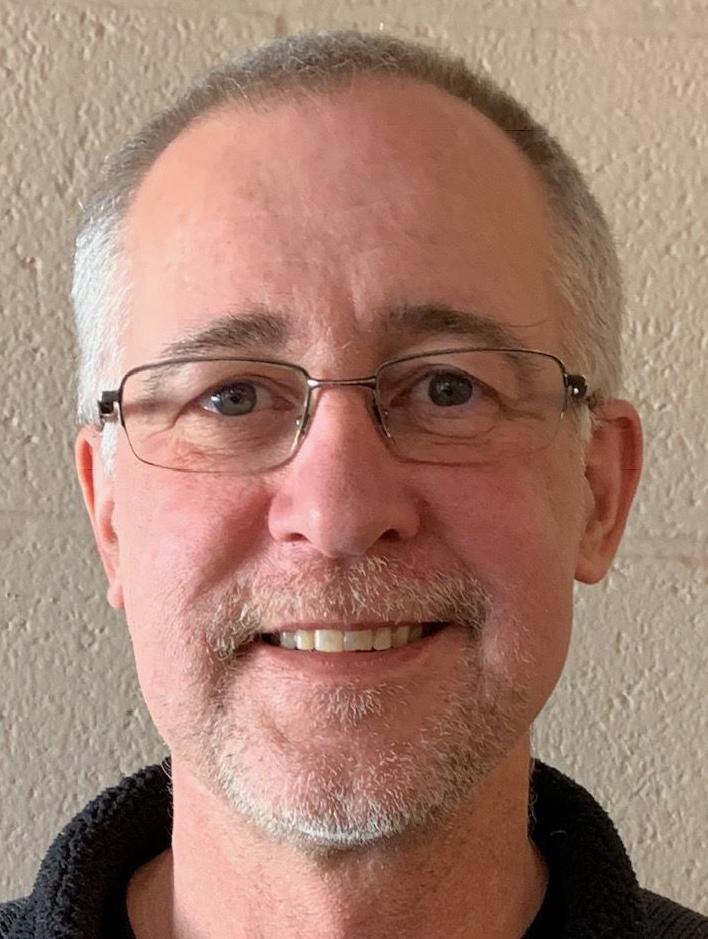 “If a bulb goes out or a light or signal gets hit, we replace it,” said Mike La Fleur, the La Crosse superintendent of streets. But the problem with the outage at the intersection at Jay and 3rd had to do with standing water in the underground pole box that turned to ice and pulled wires apart. After the ice melted, there was a significant amount of standing water that hadn’t receded.

“We had a major wiring issue there for the ped lights,” La Fleur said. The Street Department is in the process of pulling new wire into the underground pole box to replace the wiring damaged by the ice and water. 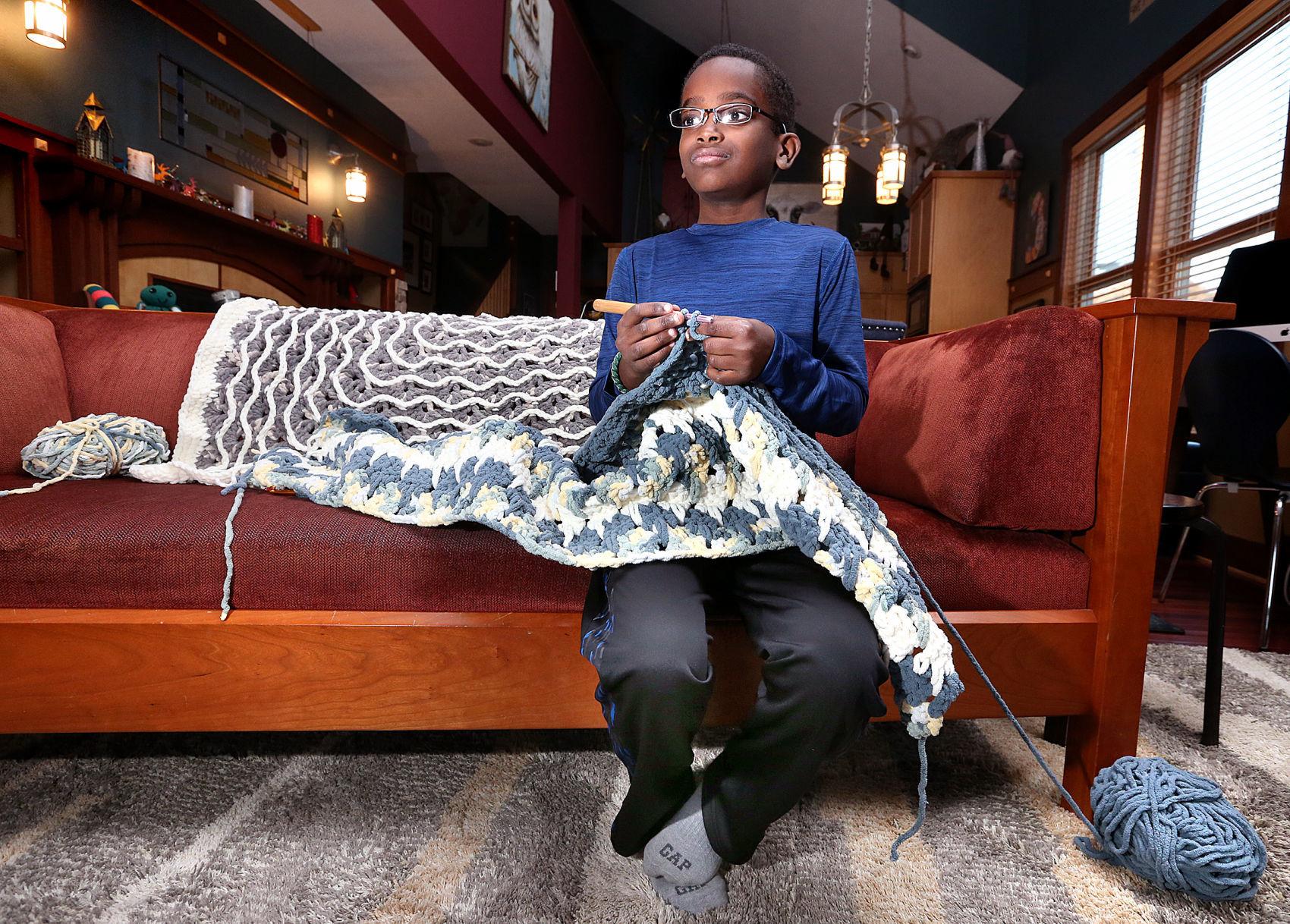 Jonah Larson crochets an afghan style blanket at his La Crosse home. The crochet prodigy continues to experience fame, with an upcoming appearance on the Kelly Clarkson Show and a workshop next month with Anthropologie.

Nine months later, his fame shows no sign of slowing down, with a soon-to-be-aired, celebrity-studded talk show appearance, an upcoming workshop at chic clothing and home goods retailer Anthropologie and a holiday issue magazine cover.

Jonah, a student at Lincoln Middle School, filmed his appearance on NBC’s new “Kelly Clarkson Show” in late August, flying out to L.A. for the taping.

A big fan of Clarkson’s pop music, Jonah learned the admiration was mutual, with show representatives letting his mom, Jennifer, know how much the American Idol alum loves the philanthropic-minded, hook-and-yarn-wielding tween.

“They told us Kelly was so excited to meet him and of course we took them up on the opportunity,” Jennifer said. 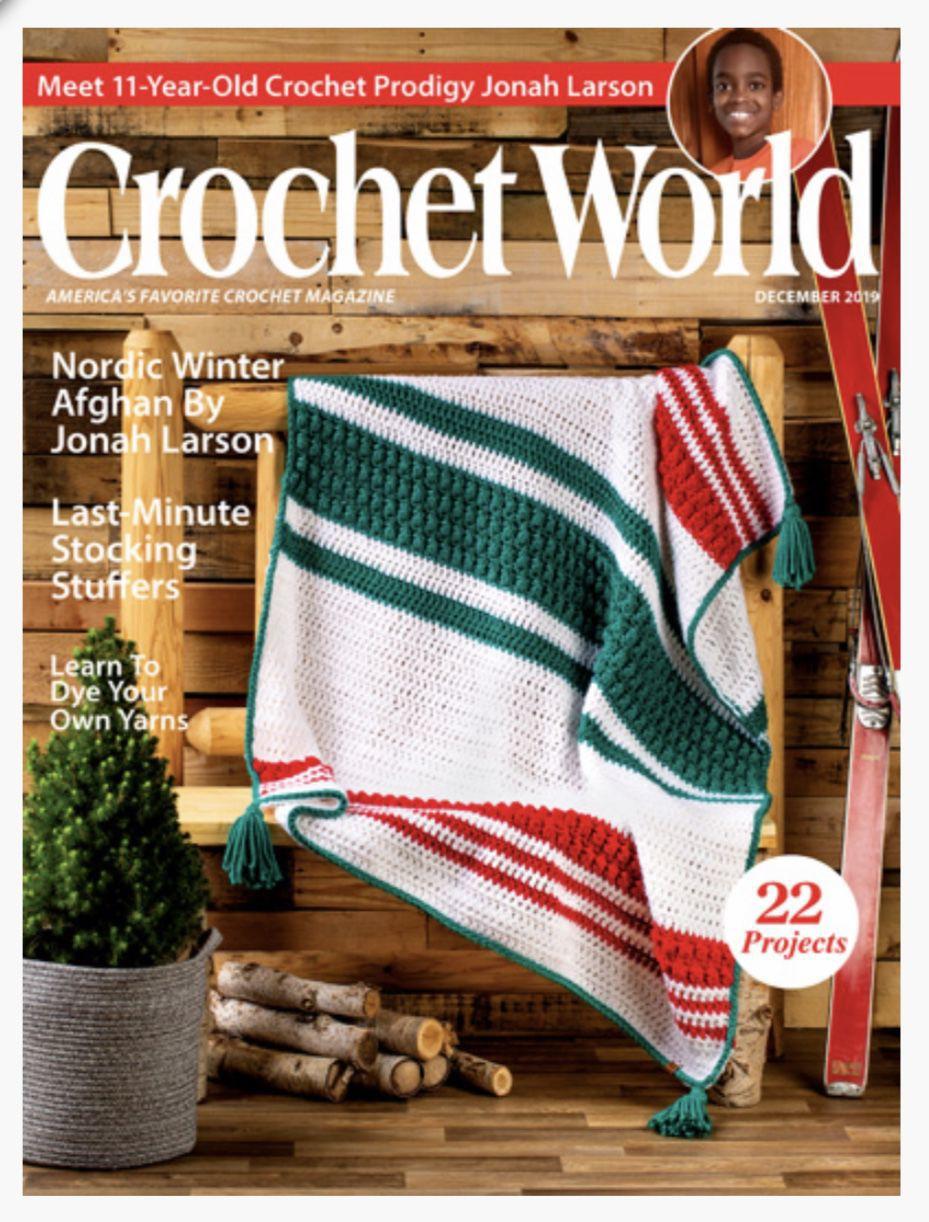 Jonah Larson and his afghan project are featured on the cover of Crochet World magazine's December issue.

During Jonah’s appearance, airing Monday, Oct. 21, he joins Cedric the Entertainer, stunt woman Mindy Kelly and Danica Patrick on the stage, leading the group in a crochet tutorial and presenting each with a gift.

Clarkson, who Jonah notes was “really nice and outgoing,” received a finger-knit afghan in her pink and purple logo colors, while Jonah crafted a winter hat for fedora-adoring Cedric.

“Because you can’t wear a fedora when it’s cold out,” Jonah noted.

Kelly was bestowed with a scarf, while Patrick received fingerless gloves and a headband, as well as a special present for boyfriend Aaron Rodgers: a green and gold hat she vowed to wear as she cheers him on at the next Packers game.

“He’s like my idol,” Jonah enthused of Rodgers. “He’s so amazing to me.”

Since the taping, Jonah has been busy crocheting items to sell Nov. 7 at the Anthropologie flagship store in Philadelphia, were he will lead a hook-free crochet scarf and cowl tutorial in the evening. Registration for the event is not yet open.

“I can’t wait,” Jonah says. “I love teaching people how to crochet so they can make beautiful things and teach other generations.”

Anthropologie, which contacted the Larsons months ago after discovering Jonah on Instagram, has also pledged $5,000 to Roots Ethiopia, an organization with which Jonah, who was adopted from the country as an infant, has previously collaborated.

In August, Jonah sent the nonprofit a $9,300 check, the money raised through his Go Fund Me campaign, which is being used to build a library in his name. A yet to be announced celebrity contributed an additional $5,000 for a reading room, and the Anthropologie funds will be designated for the development of a science lab in a school located in Jonah’s birth village.

“They have no access to microscopes and tools and (with the lab) they can make observations and do experiments and learn more,” Jonah says. “I’m so glad (Anthropologie) did that because it helps me build more and expand my dreams. Those kids in Ethiopia would be my classmates if I was still there and I want to help them (have the opportunities) like I have in La Crosse.” 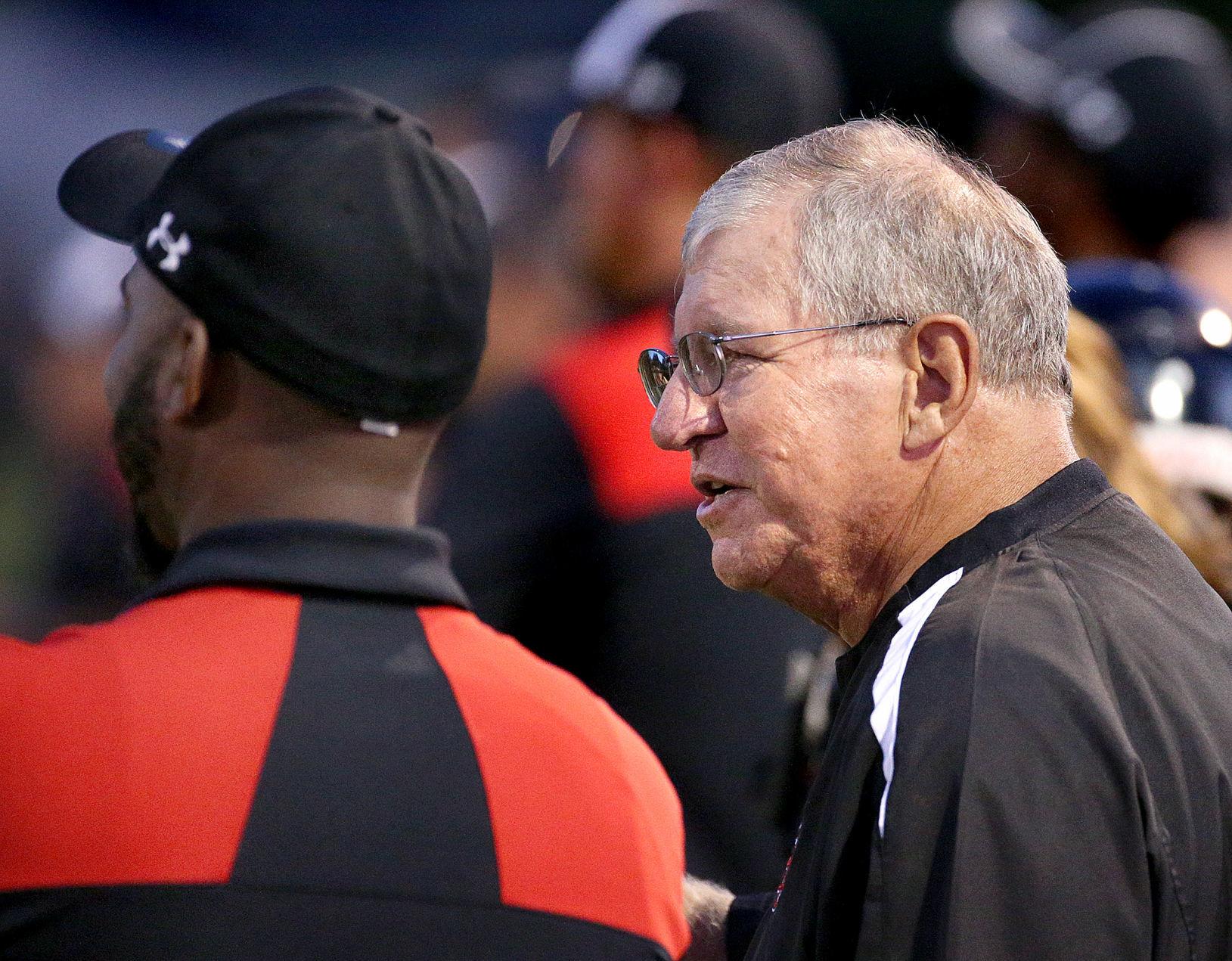 Some people love the experience of pregnancy, feeling aglow and full of excitement. Others wake up to swollen ankles and nausea, counting down the days to labor.

But for those struggling with mental health or addiction issues, the discomfort goes beyond the physical and the stress can be unbearable, leading to despondency, relapses or suicidal thoughts.

More than 13 percent of women experience major depressive symptoms during pregnancy, according to the Wisconsin Department of Health Services, and more than 14 percent will suffer from postpartum depression in the year following delivery. Many more likely go undiagnosed during the perinatal period, which spans from the beginning of the pregnancy to 12 months post birth.

With few obstetricians and delivery nurses trained to diagnose or address psychiatric and substance abuse issues, the United Health Foundation in 2017 provided $1.2 million in funding for the development of the Periscope Project, also known as Perinatal Specialty Consult Psychiatry Extension, with the Medical College of Wisconsin.

The program was founded to "fill the critical gap between statewide depression screening initiatives and lack of perinatal psychiatric treatment services in Wisconsin" and address the common practice of health-care providers to “discontinue or delay initiation of antidepressant medication when pregnancy or breastfeeding is identified due to fears about medication safety.” 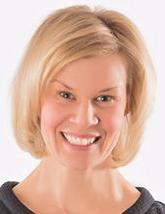 The program, which has 650 participating care providers, including Mayo Clinic Health System and Gundersen Health System in La Crosse, allows a physician or nurse to get a perinatal psychiatrist on the line in an average of six minutes to address any concerns or questions they have regarding a patient’s mental health.

Consultations last about 10 minutes, with one of the three participating psychiatrists addressing treatment options and educational and community resource information.

“One of the things we are most proud of is our call-back time,” says Periscope program director Dr. Christina Wichman, who takes the majority of the average 60 calls per month. “Ideally we can call back while the patient is still in the office, so they have a plan in place by the time they leave.”

With a general shortage of specialty psychiatrists in Wisconsin, Periscope allows patients and their providers to bypass the sometimes months-long waitlist for an appointment opening. The program is free to both provider and patient, and will be funded in 2020 by the Department of Health. 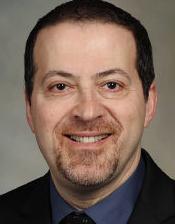 According to the Medical College of Wisconsin, mental-health disorders are the leading complication of pregnancy, with about 66 percent of calls to Periscope concerning mood disorders. Anxiety disorders comprised 32 percent, with seven percent each for substance abuse or ADHD and six percent for psychosis.

Of those calls, 28 percent were initiated by OB/GYN physicians, 16 percent by midwives, 14 percent by psychiatrists and seven percent each by family medicine physicians and OB/GYN nurse practitioners.

Wichman often fields queries about the use of medications during both pregnancy and breastfeeding, including antidepressants or the utilization of MAT (methadone) for pregnant or postnatal mothers with opioid addictions.

Other calls have concerned patients using other illicit drugs or struggling with alcoholism, seeking resources or recommendations for residential or inpatient facilities or simply how to broach “this very difficult conversation.”

“(Hospitals and providers in general) don’t do a good job of systematically screening moms for drug use,” Wichman says.

Dr. Costa Sousou, a practicing OB/GYN and chair of the La Crosse Mayo Clinic Health System Department of Obstetrics and Gynecology, says the department uses the program on average six times a year, on one occasion for a mother struggling with addiction but most generally concerning questions about the safety of depression or anxiety medications late in pregnancy or connecting patients with counseling services.

“Being able to speak with a perinatal psychiatrist allows us the opportunity to put our heads together with her and help determine what steps to take,” Sousou says. “It brings a different perspective from someone who is very educated in perinatal psychiatry.”

Sousou likens the program to a “curbside consult,” a term for when a treating physician requests informal information or advice about caring for their patient or is seeking the answer to an academic question from a colleague.

“She almost allows us to think out loud,” Sousou says of Wichman, who may offer new input or give confirmation that his intended course of action is correct.

Common queries involve whether the mental-health benefits of a patient taking their prescribed SSRI antidepressant during late term pregnancy outweigh the slight risk of using the medication in late term.

Periscope has proven a valuable resource statewide, with a survey of participating care providers showing 100 percent were satisfied with the program. Additionally, the over 500 respondents agreed they would use the information going forward.

“Really what our goal is is to apply that knowledge to the entire patient population,” Wichman says.

Sousou offers his own glowing review of Periscope.