The proposed La Crosse County budget for next year would include a tax trim for some residents if approved by the La Crosse County Board this fall, among other notable initiatives the budget ushers in.

Administrator Steve O’Malley gave an overview of his budget recommendation to the La Crosse County Board at a Monday night planning meeting, highlighting that the county has been able to keep above water during the pandemic’s

“This is probably one of the better budgets I think I’ve ever had the chance to help put together,” he said.

According to data shared by O’Malley, the county is estimated to have about $170.15 million in expenditures next year, down less than half a percent from 2021’s expenses.

The budget proposes leaning on property taxes to pay about 22% of these expenses, an increase by about 2% from last year, but residents’ tax rates will still be trimmed slightly, largely because of changes in property values and limits to the county’s tax levy, O’Malley said.

City of La Crosse officials have begun weighing how to balance its 2022 Operating Budget as current, unedited estimates would increase property taxes for homeowners by more than 13% next year.

This tax rate, also known as a mill rate, translates for property owners as a number able to be taxed per every $1,000 of a property’s value. This means that a home valued at $100,000 would have about $325 in property taxes under this rate.

This is the second year in a row tax rates for county residents will get a trim, and continues a general downward trend in taxes the county has experienced since 2017, during which the tax rate has gone down 16.7%.

“We will continue to be among the lowest taxed counties for property taxes in the state,” O’Malley said, “and quite frankly the absolute lowest property taxes of any county above 100,000 population.”

The recommended budget includes a number of other initiatives, including a 2% raise for county employees and no increase to their health insurance premiums for a fifth straight year. 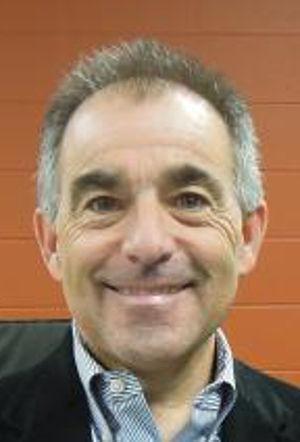 It will also be the first time in seven years when the county will see an increase of full-time employees in different departments including health and human services, zoning, IT and more.

The budget will continue the county’s multi-year debt planning, which will reduce the county’s overall debt in 2022 to $72.8 million, down about $4 million.

Some key projects the recommended budget will help fund, according to O’Malley, include updates to the countywide emergency services radio system and law enforcement dispatch software, county highway projects and more.

O’Malley also detailed that the upcoming budget will reflect a new “commitment” to the lake districts of Lake Onalaska and Lake Neshonoc, after debate several weeks ago about funding more conservation projects in the areas.

The 2022 budget would set aside $100,000 as “placeholder” funds for possible projects in ether district that would need further approval by the county board.

The La Crosse Common Council has passed a $60 million project budget: What's in it?

The price tag is not as sizeable as 2021's whopping $119 million, and brings spending back to average while putting some ambitious new developments on hold for a few years.

The budget will now go through the approval process, and head for committees to be reviewed and changed by officials. A public hearing on the budget is scheduled for Nov. 8, where afterwards the board will consider and adopt it.

At Monday’s meeting, officials did not weigh-in too much on the recommendation, but some did wonder if American Rescue Plan Act funding could help supplement some of the spending.

O’Malley said it would largely be up to the board, but stated the group is in “no rush” to spend the money, and as it stands, the county does not need to rely on the funding to balance next year’s budget.

“I think it’s really good news that you’re able to stay within the limits, continue to be one of the lowest taxing counties in the state and still do expansive increases,” O’Malley said, “and at the same time still have all of your options open for how you want to prioritize the federal money.”

In Photos: The Great River Road in Wisconsin and Minnesota
Peter Thomson
Jul 30, 2021

Scenes from Great River Road; Wisconsin's segment has been officially deemed an All-American Road by the U.S. Department of Transportation and…

"This is probably one of the better budgets I think I've ever had the chance to help put together. ... We will continue to be among the lowest taxed counties for property taxes in the state."

A public hearing on the budget is scheduled for Nov. 8, where afterward the board will consider and adopt it. 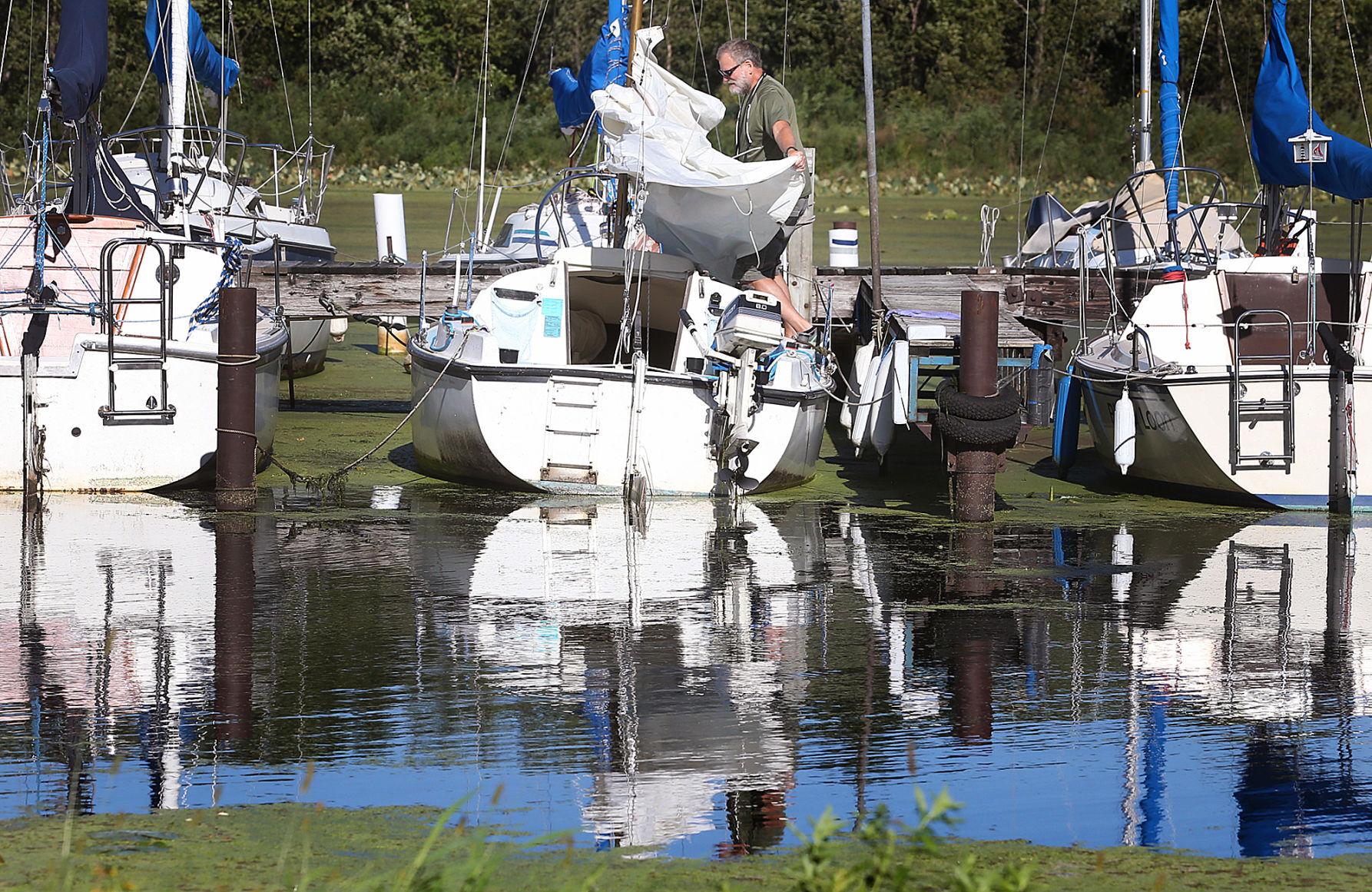 Geoff Dawes of La Crescent puts the sail of his 1978 O Day Cruiser away last week at the La Crosse Sailing Club marina on French Island after an afternoon of sailing on Lake Onalaska. 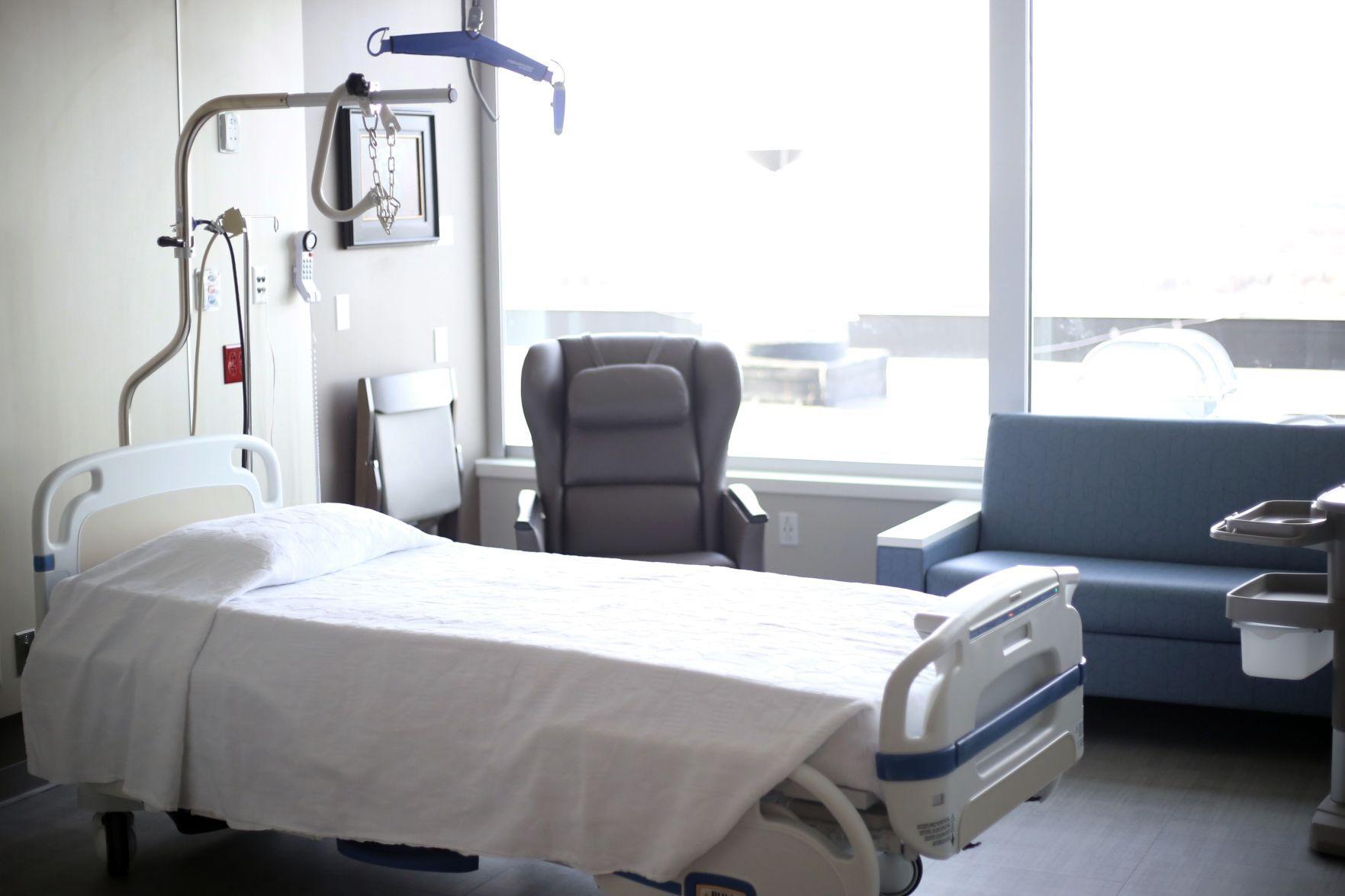 Gundersen has reported that across its sites between 40 to 50 COVID patients are being hospitalized on a given day and states “many” are unvaccinated. Coronavirus inpatients, Gundersen notes, “need more staff and more resources than an average patient.”

Mayo states that its locations are seeing both a rise in COVID patients and general hospitalizations. Since August, Mayo’s acute care capacity has ranged between 81-100% on an average day, with COVID patients making up between 15-20% of acute care or ICU patients.

“Mayo Clinic is using predictive modeling to stay ahead of the situation with COVID-19 and are constantly assessing our capacity and capabilities to determine our admitting capacity. Our bigger concern is the anticipated ongoing challenges in meeting the needs of all patients, including those without COVID-19,” Mayo stated. “Our staff are doing an exemplary job in providing this care, and we are moving aggressively to address staffing shortages to provide our staff needed assistance and relief.”

Both hospitals stress the importance of vaccination, for which individuals age 12 and older are eligible, and standard prevention practices.

“Be part of the solution to one of the greatest public health efforts of our lifetime,” Gundersen says. “Vaccination is an incredible feat of modern medicine that works with the body’s immune system to provide the best protection against severe illness, hospitalization and death. COVID-19 vaccination combined with masking, distancing and hand hygiene at work, school and any indoor, public spaces significantly lowers your risk of COVID-19 infection.”

As of Monday, the Wisconsin Hospital Association reported 1,056 COVID patients being hospitalized statewide, including 327 in the ICU. For the same day, those numbers in Western Wisconsin were 53 and 8, respectively.

Vaccination rates are climbing after a mid-summer lull, with the severity of the delta variant convincing some of those previously unintereste…

In April 2021, the FDA removed emergency use authorization for bamlanivimab and now endorses the combination of casirivimab and imdevimab, whi…

The blue baby head of a sculpture situated outside La Crosse City Hall went missing over the weekend. Its egg base is seen empty mid-day Monday.

The La Crosse Arts Board released a statement Tuesday, a day after the piece of artwork was found, saying it “denounces the act of willful damage” to the artwork, titled “Hatched Baby.”

“We urge those who participated in these acts of vandalism to come forward so we may begin the process of restoring this work of art now that the stolen portion has been recovered,” the board said. “Regardless of one’s opinion of a work of art, theft and vandalism are unacceptable.”

The face of the statue, which was created by an artist from La Crosse’s German sister city, includes a cracked egg shell with a blue baby head emerging from it.

Police reported seeing it dismembered early Sunday morning, and photos of the stolen face emerged on social media later that day. A homeowner reported finding the sculpture in their yard early Monday morning, and it has since been returned to the city, though there are currently no suspects in the theft. 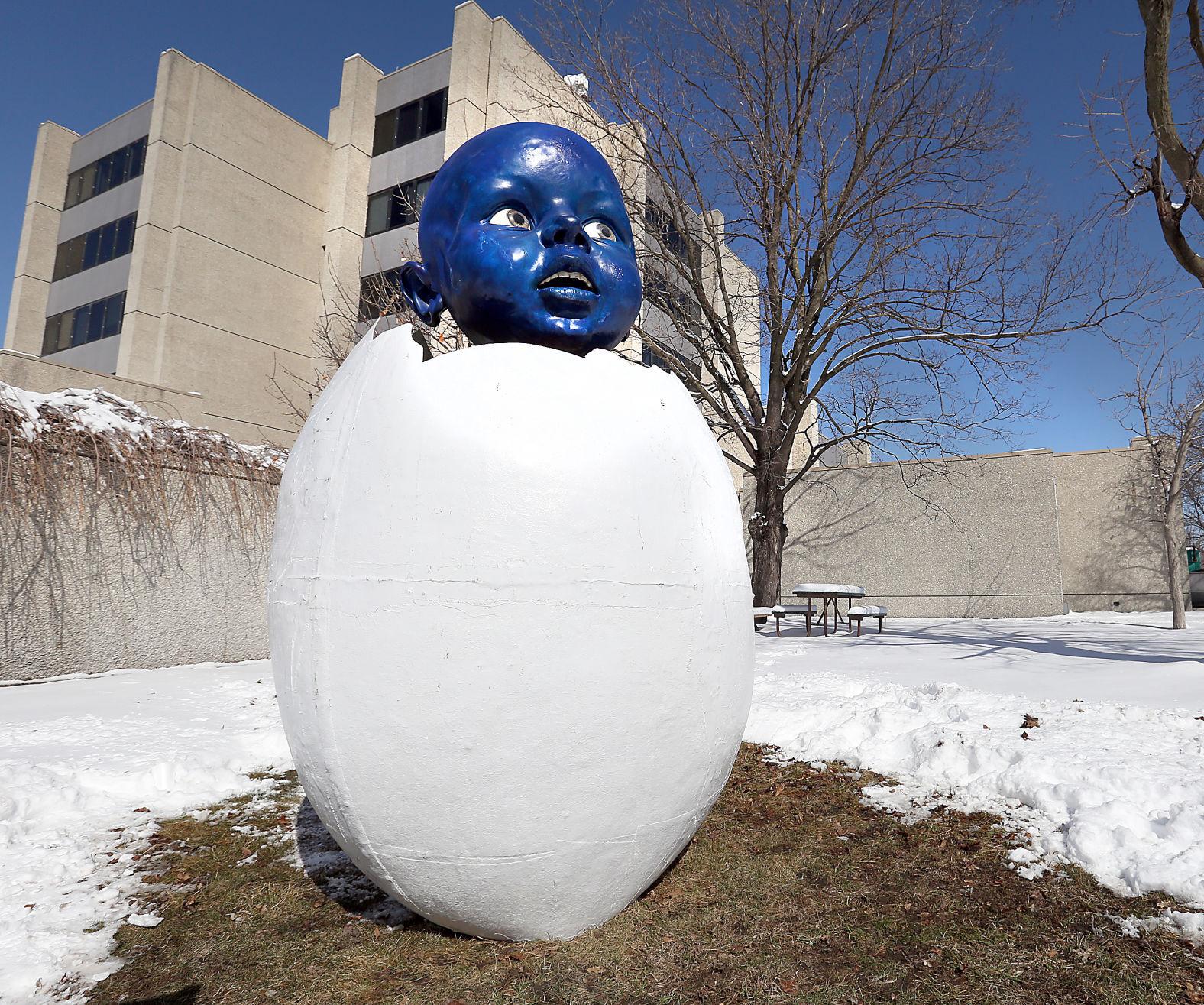 The Arts Board addressed the public’s mixed feelings on the sculpture, which has been sitting on the southeast side of city hall since 2018. After reports of the weekend’s incident, many comments flooded online from people saying they weren’t upset the sculpture had went missing.

“When art exists in the public sphere, it is subject to scrutiny, risk and sometimes outrage, and our community can support enthusiastic debate on this topic,” the board said.

“Works of art do not solely need to elicit feelings of joy. Art can evoke sadness, anger, thoughtfulness, and a myriad of other feelings. It is for the observer to distinguish their thoughts and feelings about the work of art,” the board said.

In addition, the board said that there are moments when removal of public art is warranted through an official process, such as the removal of the controversial Hiawatha statue last year, or removals of Confederate statues happening around the country.

“These examples exist in a completely different context and it is important to point out the difference between the crimes of theft and vandalism and planned dismantling of biased monuments,” the board said.

The city of La Crosse has long been home to a wide variety of sculpture, some that remind us of our past and others that will provoke discussi…

"Regardless of one's opinion of a work of art, theft and vandalism are unacceptable. ... Works of art do not solely need to elicit feelings of joy. Art can evoke sadness, anger, thoughtfulness, and a myriad of other feelings." 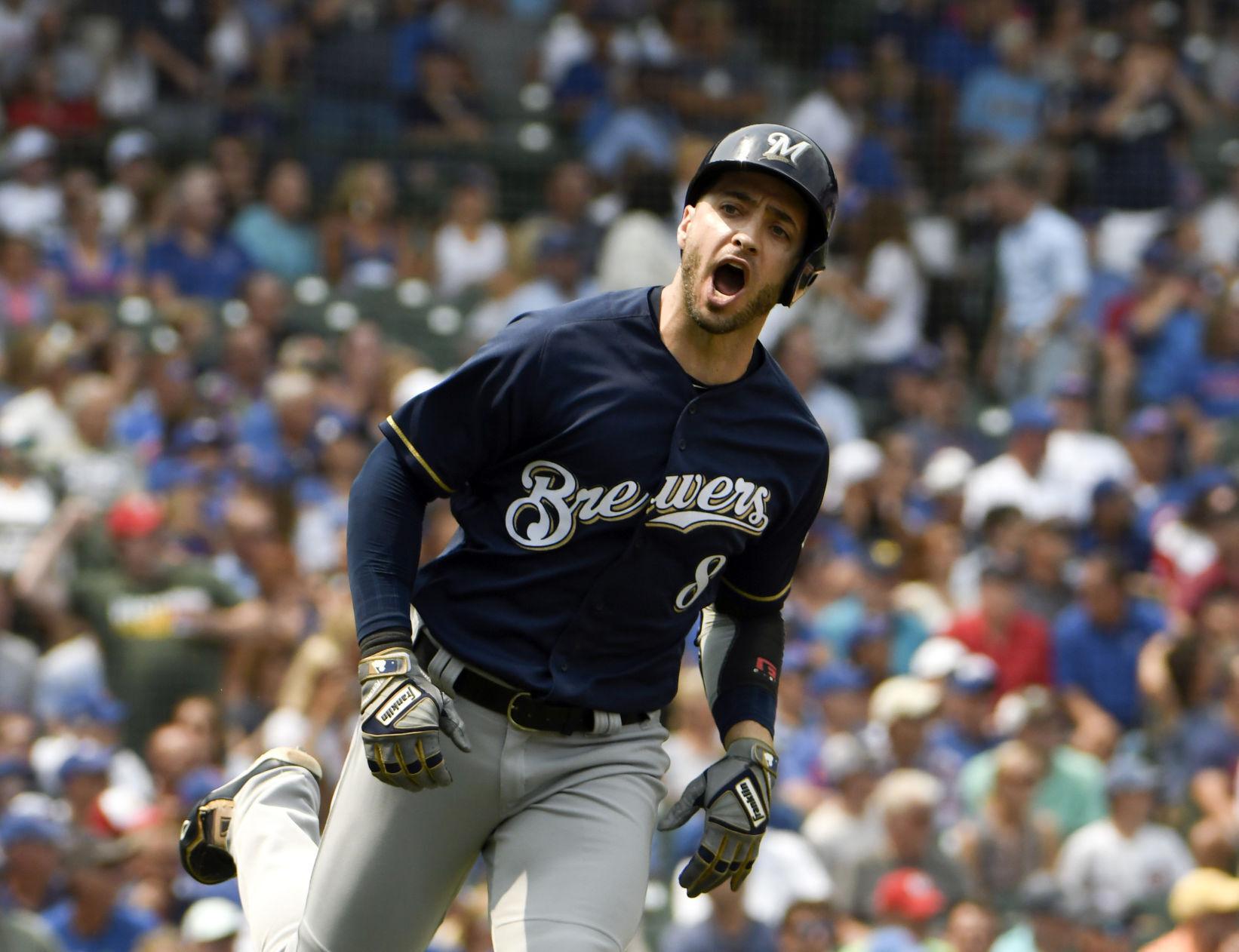 Outfielder Ryan Braun, who hits 352 home runs and had 1,154 RBI while batting .296 during 14 seasons with the Milwaukee Brewers, officially retired on Tuesday.